Rabies is a neglected disease that kills many people a year, most of them in Africa and Asia. In the majority of developing countries, the number of patients receiving post-exposure prophylaxis has steadily increased over time, particularly in urban areas due to dog-related rabies. Studies conducted in sub-Saharan Africa show that most of the rabies cases in animals and humans are caused by canine rabies virus, mostly transmitted by domestic dogs, and thus comprehensive and sustained dog vaccination is sufficient intervention in the reduction and eventual elimination of human rabies in the region. In many developing countries, progress in preventing human rabies through control of the disease in the dog reservoir was slow due to technical, inter-sectoral, organizational, and financial barriers. For developing countries like Ethiopia, a strategy should be developed to prevent and control the disease. Sustainable resources for effective dog vaccination are likely to be available through the development of intersectoral financing schemes involving both the medical and veterinary sectors. Prevention of animal rabies through dog vaccination, better public awareness, improved access to cost-effective and high-quality human rabies vaccines, and improved local capacity in rabies surveillance and diagnostics are essential for the elimination of human rabies. Generally, elimination of canine rabies is epidemiologically and practically feasible through mass vaccination of domestic dogs which is a cost-effective approach to the prevention and elimination of human rabies deaths. The purpose of this paper is to review the burden of the disease and to give direction for effective prevention and control following developed countries’ experience.

The similarity of donkey (Equus asinus) milk to human breast milk and its low allergenic properties make it used to feed human infants and patients with cow's milk protein allergy (CMPA). This milk has antioxidant, anti-inflammatory, antimicrobial, anti-tumor, and anti-diabetic activities and modulates the immune system and digestive flora. Of the 110 million equine populations in developing countries, about 40 million are donkeys. Due to the special economic and geographical conditions in the rural areas of these countries, donkeys are used as an important means of transportation [1].

Equine gastric ulcer syndrome (EGUS) is characterized by one or more ulcers in the glandular or/and non-glandular stomach of the equine. Ulcers can extend to the lower esophagus or upper duodenum. The results of a study showed that 51% of donkeys have EGUS, and all of them are infected with Gasterophilus spp, especially around margo plicatus. EGUS in donkeys is most often caused by underlying diseases such as hyperlipidemia or renal disease. Donkeys that eat much food in one or two meals have a higher risk of developing EGUS. The risk of EGUS is high in sick donkey foals and orphans. These foals show colic signs similar to horses, like bruxism and after feeding colic. Diagnosis of EGUS is based on history, clinical findings, endoscopic examination, and response to treatment. Gastrophilus spp can also be a risk factor for EGUS [2,3].

Gasterophilus fly (Diptera: Oestridae) larvae are the common cause of gastrointestinal myiasis in equine. Six species, G. nasalis, G. intestinalis, G. haemorrhoidalis, G. pecorum, G. nigricornis, and G. inermis, are called equine stomach bots, found in horses, mules, and donkeys. Adult flies lay their eggs on the animal's hair in summer. After the eggs enter the mouth, the larvae complete their life and maturation stages from the mouth to the stomach. During this process, different stages of the larva attach to the tongue, hard palate, cheeks, epiglottis, pharynx, esophagus, and various parts of the stomach, which are different for each species. Gasterophiulus spp can cause equine gastric ulcer syndrome (EGUS), anemia, difficulty swallowing, intestinal obstruction, volvulus, rectal prolapse, diarrhea, and indigestion. Gasterophilus species has also been reported in rural horses and donkeys in Iran [4,5].

Due to the increasing importance of donkey breeding in intensive systems, and the prevalence of EGUS in equine and the role of parasitic infections in gastrointestinal ulcers, we conducted the present study.

This study was performed on 12 donkeys kept for educational and research purposes in the veterinary hospital of Urmia University. The animals were between 3 and 7 years old and were both male and female. The donkeys weighed between 120 and 170 kg and had body scores of three to four. All animals received alfalfa-based diets and had free access to water. No working or sports activities or starvation were imposed on the donkeys. At the necropsy of 10 donkeys from this herd, Gasterorphilus spp was observed in the stomachs of two cases. Larvae isolated from the stomach were identified by stereomicroscopic examination of two species, G. intestinalis and G. nasalis. After necropsy, the rest of the herd donkeys (n=12) received oral ivermectin (0.2 mg/kg, IVERGEN, Laluk, Tehran, Iran) 6 weeks before endoscopy [6-8].

The donkeys were examined for general health before any diagnostic procedure was performed. Oral and especially tongue examinations were performed for the possibility of lesions due to invasion of Gasterorphilus larvae.

About 12 hours fasting and 4 hours of water deprivation before gastric endoscopy were considered for each donkey. Sedation was performed using a combination of acepromazine (0.03 mg/kg, NEUROTRANQ®, Alfasan, Woerden, Holland) and xylazine (1 mg/kg, XYLAZINE, Alfasan, Woerden, Holland). Gastroscopy was performed on the squamous and glandular mucosa of the gastric to the pylorus by equine videoendoscope (STORZ, RP100, Tuttlingen, Germany). For a more accurate view, the food remaining on the gastric mucosa was washed with distilled water, and grater curvature, less curvature, dorsal fundus, and pylorus evaluated. Horse gastric ulcer scoring provided by Andrew et al. was used to assess the presence and degree of EGUS. In this method, grades 0, 1, 2, and 3 represent complete health, single or multiple small ulcers, single or multiple large ulcers, and extensive or indepth ulcers, respectively.

The animals appeared completely healthy on clinical examination before endoscopy. Appetite, body temperature, GI sounds, alertness were all in the normal range. Examination of the mouth and tongue showed no apparent signs of the larval burrow [9-12].

Examination of the pharyngeal and esophageal structures showed no signs of adhesions or lesions left from larval attachment. Gastroscopy of non-glandular and glandular gastric mucosa, margo plicatus, and pylorus showed no ulcers above 0 degrees. Only in one case was local hyperemia observed in the gastric mucosa's non-glandular part, which is considered in the 0-grade classification. Endoscopic examinations did not show any attached G. intestinalis or other Gasterorphilus larvae to the gastric mucosa. Complete intact gastric mucosa indicates that there has been no recent parasitic adhesion to the mucosa Figure 1. There was no sign of third stage Gasterorphilus larvae in fecal monitoring. 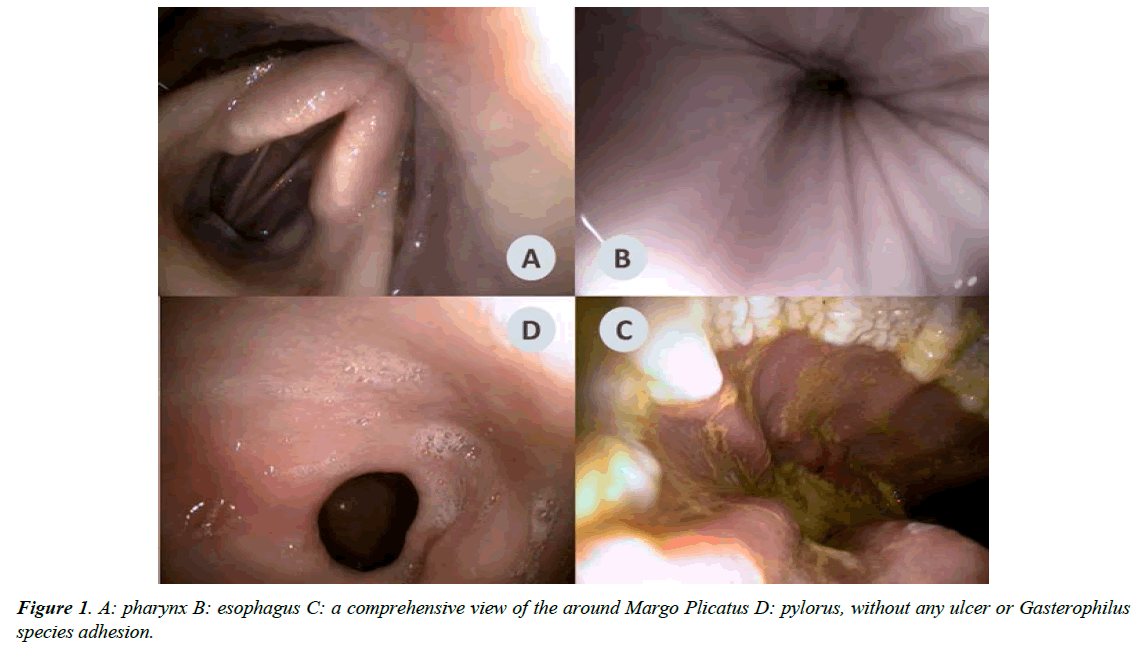 Figure 1: A: pharynx B: esophagus C: a comprehensive view of the around Margo Plicatus D: pylorus, without any ulcer or Gasterophilus species adhesion.

There were no signs of EGUS or Gasterophilic infections in the donkeys we studied. Previous studies have confirmed that donkeys are infected with Gasterophilus species, and have EGUS. A study of a large population of British donkeys found that 42% of them had gastric ulcers and 0.4% had Gasterophilus species infection [13-16]. A study in Nigeria found that 52.2% of donkeys were infected with Gasterophilus species, which 30.4% were related to G. intestinalis and 21.7% to G. nasalis. Parasitic infections such as Gasterophilus species have been reported in 3 of 10 donkeys who underwent gastroscopy. Of the 39 donkeys studied in Italy, 17 belonged to educational and research departments and 22 belonged to two private farms. These donkeys were kept in sand paddocks, fed meadow hay, and not received any vaccine or antiparasite. Twenty of these donkeys had EGUS, and all 39 had Gasterophilus species. Regardless of the presence or absence of EGUS, endoscopic examinations of all donkeys infected with G. intestinalis showed larvae attached close to Margo plicatus, no parasites found in the proximal duodenum. In this study, although the donkeys were kept in the veterinary school, they had parasitic infections that could be due to the lack of use of antiparasitic drugs. Macrocytic lactones (such as ivermectin) are the recommended drug to prevent Equine Gasterorphilus infections. Oral ivermectin has also been used in donkeys at a dose of 0.2 mg/kg. Recently, a study was performed on combining nano chitosan with ivermectin, which creates synergy by reducing side effects. In the present study, a single oral dose of ivermectin (0.2 mg/kg) was used, and the results were very satisfactory.

Keeping donkeys outdoors and feeding them pasture forage can also increase the risk of gasterophillosis. Previous researchers have also attributed changes in the prevalence of Gasterophilus spp in equine to climate changes. Most of the Gasterophilus species reported cases were from areas with a Mediterranean climate. In previous studies, donkeys had the highest parasitic infection among equine, and the equine in the northwestern region had the most helminth infestation. However, the present study was performed on donkeys kept in northwestern Iran, and after using macrocytic lactones, none of the animals had Gastrophilus species on endoscopic examination [16-20].

Although researchers attribute most of the equine gastrointestinal parasites to pasture, they acknowledge that some species, such as G. intestinalis, have little to do with feed due to their life cycle. The necropsies of nine dead horses in a herd, revealed many L3 Gasterophilus pecorum larvae attached to the esophagus and gastric mucosa. All the horses in this herd were fed only from the pasture. G. pecorum is the only species of Gasterophilus that lays its eggs on pasture plants. Therefore, the relationship between pasture and Gasterophilus species infection is only in G. pecorum. The non-use of pasture by the animals participating in this study can be useful in preventing Gasterophilus species infections but the presence of infection in animals necropsied from this herd diminishes this claim.

The change in keeping donkeys in an intensive system has caused the feeding shift from pasture to grain food. The type of diet consumed is one of the critical risk factors for the development of EGUS. Cereal grains increase the risk of EGUS in donkeys. Gastric ulcers can cause colic in donkeys. Our results suggest that receiving alfalfa-based, grain-free diets may help prevent EGUS in donkeys [21-24].

Our evaluation results on donkeys kept in an intensive system have shown that proper management can prevent the occurrence of Gasterophilosis and EGUS on modern farms. Farming in clean stables, the use of alfalfa-based diets, regular feeding times, and especially antiparasitic drugs are some of the success factors in maintaining the health of donkeys in intensive systems against EGUS and Gasterophilus species infestations. However, more studies are needed on the risk factors for EGUS and Gasterophilosis in donkeys.

The authors proudly thank Dr. Mohammadi for his help with sedation techniques. We also thank Reza Valipour for the technical assistance in conducting the experiment.

Authors have declared that no competing interests exist.

This experiment was not supported by any Institute or funding.