Neonatal meningitis is one of the devastating form of infection in neonates with high mortality and poor long term neurological sequelae [1,2]. Accurate diagnosis of meningitis in neonates is challenging due to many diagnostic difficulties. One such challenge is interpretation of protein and sugar values, especially in preterm neonates due to increased permeability of blood brain barrier [3]. Currently, gold standard for diagnosis of neonatal meningitis is culture of Cerebrospinal Fluid (CSF) [4] and no other investigation apart from culture can reliably exclude meningitis in neonate. However yield of culture is very low due to use of antibiotics and low volume of CSF taken for analysis. Many adult and paediatric studies have demonstrated the utility of BACTEC culture method for increasing the yield of sterile body fluids including CSF. Most of these studies have demonstrated increased yield when CSF is inoculated in BACTEC bottles. There are no clinical studies in neonates which have evaluated this aspect. Hence this study was planned to evaluate the yield of CSF in BACTEC culture method versus conventional method in neonates undergoing lumbar puncture.

This was a prospective observational study conducted in a level III neonatal unit of a tertiary care pediatric hospital in South India. All neonates with clinical indication for lumbar puncture were assessed for eligibility. Inclusion criteria for the study included all of the following: Gestational age between 32 to 42 weeks and weight more than 1250 grams, age less than 28 days and clinical indication of lumbar puncture. Neonates who were moribund with life expectancy less than 24 hours, major life threatening congenital malformations, spinal abnormalities and contraindications for lumbar puncture like thrombocytopenia (platelets <30000 mm3) and INR>1.5 were excluded from the study. The study was approved by the institutional ethics committee and informed consent was obtained from all the parents.

All neonates who met all the inclusion criteria and none of the exclusion criteria were included in the study. These neonates underwent lumbar puncture as per unit protocol. Approximately 0.5 ml of initial CSF was drawn into a sterile syringe and inoculated into BACTEC bottle after cleaning the hub of BACTEC bottle with alcohol swab. Remaining CSF was collected in sterile vials for rest of the investigations including cytology, sugar, protein, gram stain and culture by conventional method. BACTEC Microbial Detection Systems and culture bottles provide both a microbial detection system and a culture media with suitable nutritional and environmental conditions for organisms which might be present in the test sample. For conventional culture method the CSF samples were inoculated onto conventional media consisting of blood agar plate, a chocolate agar plate, MacConkey agar plate and thioglycolate broth. 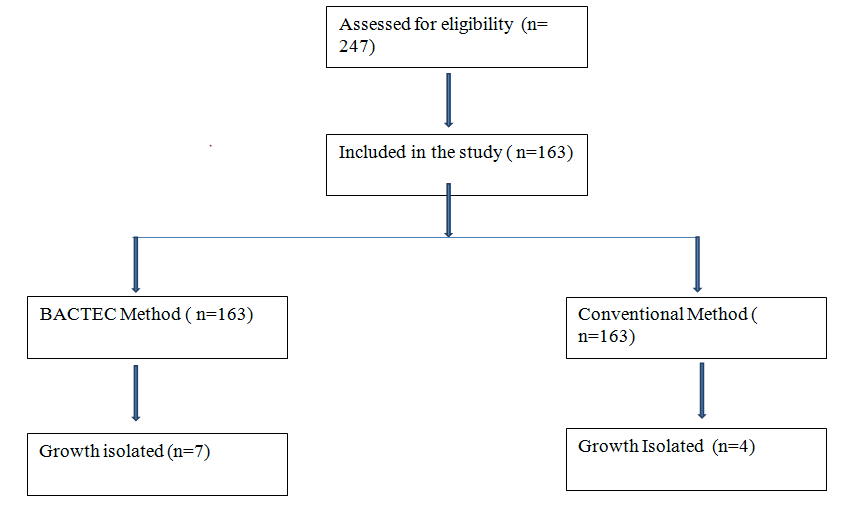 CSF culture yield in conventional method and BACTEC method was considered as primary outcome. The time required for isolation of organisms and contamination rate in both the methods were considered as secondary outcomes. Sample size was calculated based on the positivity rate in conventional method of CSF culture. Data from our own institute showed a positivity rate of 3.4%. In order to compare between two methods with 80% power and 5% level of significance, the total sample size required was 163 in each group.

A total of 247 neonates were assessed for eligibility of which 84 neonates did not meet inclusion criteria for various reasons. A total of 163 neonates were included in the final analysis. The baseline demographic, clinical and laboratory characteristics is depicted in Table 1.

There were 2(1.2%) and 3(1.8%) contaminants in BACTEC and conventional method respectively. The average time for isolation was 51.4 hours in BACTEC group as compared to 96 hours in conventional group (Table 3).

Table 3. Time of isolation of organism in BACTEC vs. conventional method.

The gold standard for diagnosis of neonatal meningitis is culture of CSF. Other CSF parameters including biochemical parameters and markers, either alone or in combination, cannot reliably exclude meningitis. Since the baseline yield of CSF by conventional culture methods is very low, a possibility of increasing the yield of CSF by culture in BACTEC method was explored in this study. Neonatal meningitis is a serious clinical condition with high mortality and morbidity [4]. The use of BACTEC culture system for culture of body fluids has been explored in many studies and has shown to improve the yield and time required for isolation as compared to conventional methods [5,6].

In a study by Akcam et al. BACTEC system was superior to traditional methods for isolation of organisms from body fluids and the highest yield was from cerebrospinal fluid as compared to other body fluids [7]. In a large analysis of 2,545 adult CSF samples by Young et al., BacT/Alert FAN method was superior to conventional method for culture of CSF samples. The positivity rate was 7.2% as compared to 3.1% in conventional method [8]. In our study even though there was a marginally increased yield in BACTEC method with statistically significant result (4.2% vs. 2.4%, p<0.01), it was not clinically significant to change the current practice of CSF analysis. There were only 4 samples which tested positive in BACTEC method which was negative in conventional method. Even in the neonates who were treated as meningitis based on other biochemical parameters, there was no increase in yield in BACTEC method. The possible reasons of low yield in our study could be due to prior administration of antibiotics, low volume sent for analysis, probability of small inoculum of organisms [9, 10].

The uniqueness of our study lies in the fact that it is the only study to the best of our knowledge which has evaluated this aspect in neonates. Our study is not without limitations. The volume of CSF used was less as compared to adult studies which might have an impact on low yield in our study. The use of prior antibiotics probably also had a role in low yield in BACTEC. In conclusion, culture of CSF neonates by BACTEC method marginally increases the yield without much clinical significance. The use of this method in neonates who have not received prior antibiotics and use of larger volume CSF in BACTEC method can be explored in large prospective studies.