Review Article - Journal of Food Microbiology (2018) Special Issue: Synbiotics: a combination of Prebiotics and Probiotics to improve gut microbioma and to prevent and fight diverse diseases

New insights on the effects of prebiotics, probiotics and synbiotics in the gastrointestinal diseases and cancer.

The gut microbiota is a natural community of microorganisms, among them lactic acid bacteria and bifidobacteria, which maintains a complex and bidirectional interaction with different organs of the host. On the other hand, it has been demonstrated that there is a relationship between gut dysbiosis and onset or worsening of different systemic diseases. The scientific advancements have contributed to growing interest on probiotics, which are live microorganisms used as functional food supplementation and that, when consumed in adequate amounts, can improve health and repair several systemic disturbances. Accordingly, there is an increase in the number of studies designed to the understanding of the beneficial effects of kefir, a complex fermented dairy product created through the symbiotic fermentation of milk by lactic acid bacteria and yeasts, contained within an exopolysaccharide and protein complex called a kefir grain. Although the benefits of kefir in diverse diseases have been demonstrated since decades ago, most of data demonstrating the beneficial effects of this synbiotic (prebiotic and probiotic) in cancer disease is recent. This review is focused on experimental and clinical studies demonstrating important mechanisms and effects of kefir in cancer processes.

The intestines are colonized by a wide variety of natural community majorly constituted of non-pathogenic microorganisms, which co-habit with the enterocytes in a symbiotic relationship and are collectively referred to as the gut microbiota [1] and has great impact on the health on human being [2,3]. Therefore, normal gut commensals provide host barriers against pathogenic microorganisms by killing them, consuming nutrients, promoting development and maintenance of intestinal mucosa and modulating immune response via inflammatory cytokines and gut antibodies [1,2,4]. The consumption of healthy foods helps to prevent and to fight undesiring microbes in the gastrointestinal tract [5]. On the other hand, bad alimentary habits contribute to the onset and aggravation of chronic diseases, including gastrointestinal disturbance [6] and even cancer processes [7]. Gut-microbiota influences the function of diverse organs through autonomic enteric and afferent/efferent (vagal) nervous system, neurotransmitters, and immune-effectors, suggesting a bidirectional interaction between the gut microbiota and the host’s organs function [8-12]. The disturbance of the gut microbiota (gut dysbiosis), which can be caused by acute and chronic infections of the gastrointestinal tract, antibiotic therapy, systemic diseases, aging process, diet lifestyle and excess reactive oxygen species (ROS), can affect the disfunction of diverse organs and systems and complex diseases such as cancer.

Prebiotics (such as non-digestible inulin and some oligosaccharides), probiotics (such as Lactobacillus and Bifidobacterium) or synbiotics (prebiotics and probiotics) are biomodulators which exert their beneficial activity on the host`s gut microbiota [13]. A growing number of studies have provided evidence that beneficial actions of this functional food include the repair of the balance of ROS/NO (nitric oxide) and biomodulation of the immune system [14-18].

Anti-oxidant and Anti-inflammatory Actions of Synbiotics

A growing body of evidence suggest that kefir supplementation counteracts the actions of excess of ROS, and it has been suggested as a promising preventive and curative therapy in several chronic diseases. Recent studies have demonstrated promising beneficial effects of kefir in cardiometabolic diseases [19], neurodegenerative disorders [20-22] and pancreatitis [21]. An important mechanism of action of kefir could include the biological opposition against the generation of ROS, which occurs when the antioxidant capacity of human physiology is exceeded, resulting in oxidative stress through various irreversible cellular damages by oxidation of proteins, lipids, carbohydrates and nucleic acids [23,24]. ROS sources include mitochondrial electron transport reactions and enzymatic mechanisms (e.g. NADPH oxidase, xanthine oxidase) [23,24]. Kefir components could directly scavenge intracellular ROS and kefir extract could increase the activity of ROS scavenging enzymes, such as catalase and superoxide dismutase. In addition, Cenesiz et al. [25] demonstrated, in a mouse model of carcinogen-induced colon cancer, that kefir is capable to reduce the lipid oxidation and increase the antioxidant glutathione (GSH), thus increasing NO concentration.

stimulate the innate and or the adaptive-immune response [26,27], corroborating the data from others showing that kefiran augments the immune response and suggesting that the modulation of biogenic compounds occur first in the intestine and later reach the immune system of the whole body [9]. Later, others demonstrated that initial consumption of kefir increases the levels of interleukin, TNFα and INFγ cytokines both in animals [26,27] and in in vitro experiments [28]. On the other hand, after the first days of kefir consumption, it has been observed that the majority of these cytokines quickly decreased back to control levels, while the anti-inflammatory cytokines remained chronically elevated [28,29]. Therefore, kefir seems to decrease proinflammatory cytokines and increase anti-inflammatory cytokine IL-10. Moreover, several studies with whole kefir, kefir fraction, or organisms isolated from kefir demonstrated that anti-inflammatory cytokines promote a Th2 response while simultaneously inhibit the pro-inflammatory Th1 response [26-28].

Now, is becoming clear that kefir supplementation plays a role as anti-inflammatory agent in several pathologies of gastrointestinal tract [28]. For example, It has also been reported a beneficial effect of kefir in the early stage of esophagitis (one day after damage induction) in histopathological features in rats, evaluating inflammation and injury in muscularis mucosa and collagen deposition [30].

Studies on gastric ulcer have suggested that kefir could have a beneficial effect on peptic ulcer disease induced by non-steroid anti-inflammatory drug, although the results were inconclusive [31]. Supporting this hypothesis, oral administration of kefir milk significantly improved total acidity, peptic, H+/K+ ATPase and gelatinases activities, malondialdehyde level and loss of mucus content associated with gastric ulcer in irradiated rats [32]. Finally, it is important to mention the preventive role of kefir on gastrointestinal infections. L. plantarum C4, isolated from kefir, increases resistance to intestinal infections through its immunomodulatory activity [33]. Also, pre-treatment with a microbial mixture containing bacteria and yeasts isolated from kefir, resulted in inhibition of Shigella flexneri internalization into human intestinal epithelial cells, along with the inhibition of the signalling via NF-κB that in turn led to the attenuation of the inflammatory response [34,35].

At the end of the twentieth century, several groups started to perform researches on the role of kefir on different tumoral or cancerous processes. These studies demonstrated that the synbiotic kefir and some of the bioactive compounds of kefir have important antimutagenic and anticarcinogenic activity [36-39], as well as great potential for inhibition of proliferation and induction of apoptosis in tumor cells, as has been reviewed by Sharifi et al. [40]. Currently, it is known that kefir has important effects on carcinoma, leukemia, colorectal cancer, malignant T lymphocytes, breast cancer and lung carcinoma demonstrated that kefir products have a significant effect on cellular process against cancer progression and apoptosis [40].

One of the most important advances was the establishment of the effect of kefir on breast cancer process. It was reported that after 7 days of treatment, kefir may modulate immune response in mammary glands increasing IL-10 in serum and decreasing interleukin-6 positive cells and increasing induce number of CD4 positive in mammary glands [16,17]. Later, it was proven that kefir also inhibits in vitro proliferation of tumor breast cells [41,42]. Interesting, antimetastatic and antiangiogenesis effects of kefir water has been demonstrated on murine breast cancer cells, probably by immunomodulation by stimulating T helper cells and cytotoxic cells [42]. Those authors showed that kefir water has relevant potential in the fighting of cancer process. This study brought out the potential of the probiotic beverage kefir water in cancer treatment.

Several studies focused on colorectal cancer demonstrated the potential interest of the use of kefir in this pathology. DNA damage induced by fecal water is decreased by kefir in a dose dependent manner in human colon cells [38]. Also, in vitro assays have shown that kefir inhibits the proliferation and induce apoptosis in HT29 and Caco2 CRC cells, yet it does not exhibit a significant effect on the motility and invasion of these cells [43]. On the other hand, kefir consumption did not significantly modify serum proinflammatory cytokine levels and the incidence of mucositis in patients with colorectal cancer [35] and it has no beneficial effects in terms of quality of life for patients with this type of cancer [44].

A strong inhibition of tumor growth by apoptotic tumor cell lysis was also reported after oral administration of milk and soy milk kefirs to mice inoculated with sarcoma 180 tumor cells (Liu) [50]. In conclusion, it has been demonstrated that kefir has a protective role in several oncologic diseases and it could be applied in cancer prevention or as coadjuvant in cancer treatment. This potential therapeutic use of kefir has been reviewed by Rafie et al. [51]. Effects of the synbiotic kefir in different types of cancer as explained in Figure 1. 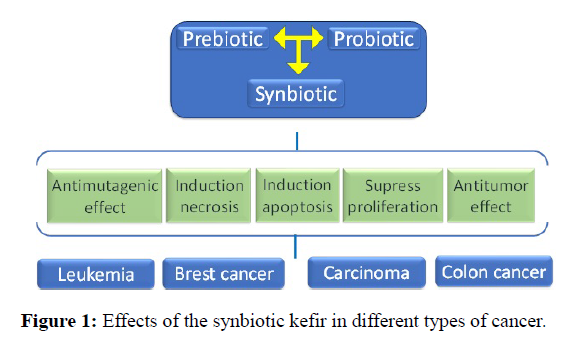 Figure 1: Effects of the synbiotic kefir in different types of cancer.

All authors have read and approved the final version of the manuscript.

All authors declare that they have no competing interests.