This paper studied the changes of nutrients such as total sugars, total acids and pH values in the process of 7 sweet cherry and 5 sour cherry varieties. The results showed that the changed trends of total sugar contents of sour cherry varieties were basically the same. The sugar content decreases rapidly in the first 8 days of fermentation, and gradually stabilized in the later stage. The sugar content of “Meizao” and “Zaohongzhu” decreasesd rapidly, with a advantage of short brewing cycle compared with other sweet cherry varieties; While changing, the total acid content of sour cherry was significantly higher than that of sweet cherry, among which “Meizao” had the lowest acid content; The pH values of 12 kinds of cherries showed a tendency of decreasing in the early stage and increasing in the later stage. The pH value of “Meizao” was significantly higher than that of other cherry varieties during the brewing process, and the pH value of “Russian sour cherry” was the lowest. Although with different cherry varieties, the pH values in the brewing process were quite different, the final pH values were maintained between 3.6 and 4.5.

In recent years, cherries (Cerasus pseudocerasus G.Don), as Rosaceae subgenus, are mainly distributed in places such as Shandong, Anhui, Henan and so on, and the main varieties include “red light”, “Meizao”, “black pearl”, “early-mahapphala”, “Rainey”, “pioneer” etc. [1]. In recent years, the cherry industry has developed rapidly and the yield has been increased rapidly. However, due to some limitations of cherries, such as difficult storage and transportation, short harvest period [2]. cherries are generally processed into juice, jam, dried fruit and cherry wine in addition to as fresh fruit. Among them, cherry wine not only prolongs its expiration date, but also greatly preserves the active ingredients of the fruit, thereby fully developing the cherry resources. In addition, cherry wine also has a very good health care effect, which is popular with the public [3,4].

Operation points: Select fresh and non-pest mature healthy cherry fruit, wash it with water, remove the cherry core with a core remover, and beat it with a beater. Add 2.5 L of cherry pulp into a 3 L glass jar with fermenting plug, then add 1.25 mL of meta-sulfuric acid solution, adjust the sugar content of the cherry pulp to 220 g/L with glucose, and add the activated yeast (weighed 0.5 g sugar first), after that, use the 10 ml 30°C water (not more than 40°C) to dissolve, add 0.2 g yeast, stir well). All the inoculum volume are 1 × 106 CFU/L, stand the middle product in 20°C biological tank to ferment. When the residual sugar content in the fermentation broth is ≤4.0 g/L, the fermentation is terminated by supplementing 0.5 mL of the metasulfuric acid solution. Afterwards, place the cherry wine in the 0~5°C atmosphere chamber for aging.

• Appraisal of fruit flavor and quality: 15 professional tasters were asked to evaluate different varietiesaccording to their taste, sour-sweet, sweet-sour, sweet [10].

• Determination of pH value of fruit: Weighed 5 g crashed cherry pulp, read it with the acidity meter, measured it 3 times in parallel, and the average value was calculated as the pH value [11,12].

Origin software and SPSS 19.0 were used for statistical analysis, and Duncan's method was used to compare the mean values (P<0.05).

The pH value of different varieties ranged from 2.11 to 4.40, with an average of 3.44 and a coefficient of variation of 10.17%. SPSS analyzing the variance showed that there was difference in pH value between different varieties, and Zaohongzhu had the highest content, at 4.40, which was significantly different from other cherries (P<0.05). 'Russian sour cherries' had the lowest pH, at 2.11. The cherries with higher pH values included 'Black pearl', 'Meizao', 'Red' and 'Chelan', etc. H-3 ', 'H-2' and 'H-8' had lower pH values.

The total acid content of different varieties ranged from 16.43 to 87.81 g/kg, with a mean of 38.09 g/kg and coefficient variation of 9.43%. There was a difference in total acid content among different varieties by variance of SPSS. The content of 'H-2' was the highest at 87.81 g/kg, which was significantly different from other cherries (P<0.05). Zaohongzhu was the lowest, at 16.43 g/kg. The cherries with higher total acid include 'H-8', 'Russian sour cherry' and 'H-3', etc. 'Red', 'Tieton', 'Black pearl' had lower content. 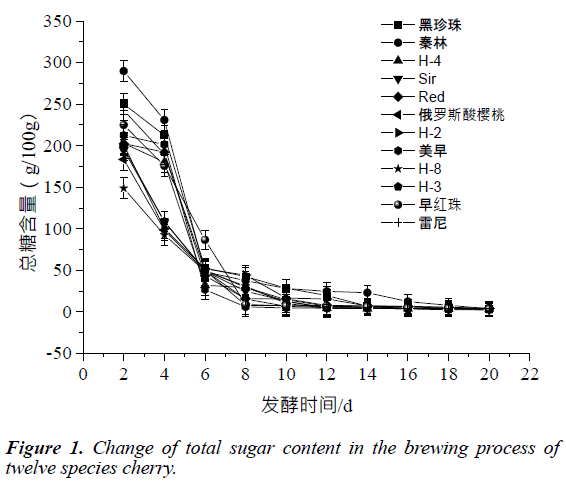 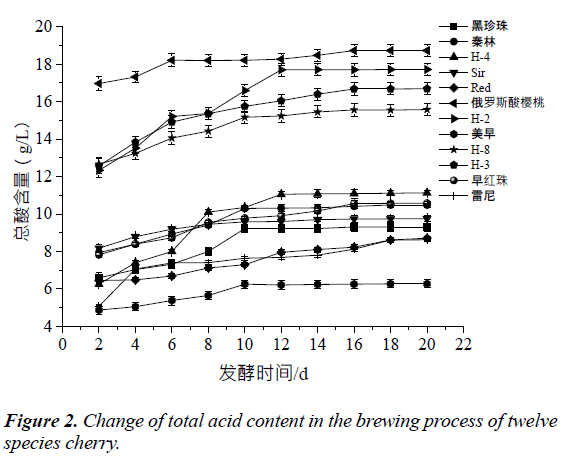 Changes of pH value: During the brewing process of cherry wine, many biochemical reactions are related to pH, and the change in pH is closely related to the quality of cherry wine. When the pH value is too high, the stability of cherry wine will be poor which will affects the quality of cherry wine, so controlling its pH value during brewing is one of the key links [16,17]. It can be seen from Figure 3 that the pH values of the 12 kinds of cherries in the fermentation process shows a trend of decreasing in the early stage and increasing in the later stage. The pH values of different cherry varieties during the winemaking process are significantly different, and there are some differences in the extent of increase and decrease. It is helpful to control the PH value of different kinds of cherry wine in the later stage. The pH value of 'Mei Zao' was significantly higher than that of other cherry varieties during the brewing process. The pH value remained stable in the early stage and decreased rapidly after the 18th day. The pH value of 'Russian cherry' was the lowest and increased gradually in the early stage of fermentation while dropped rapidly after 12th day. The increase in pH was due to the rapid growth of yeast to produce alcohol, which inhibited the invasion, growth and acid production of harmful microorganisms, but after entering the middle stage of fermentation, various microorganisms rapidly grew and produced lactic acid and lactobacillus, a small amount of carbon dioxide lowered the pH [18-21]. Although the cherry varieties were different and the pH values were greatly different during the brewing process, the final pH values were maintained between 3.6 and 4.5. 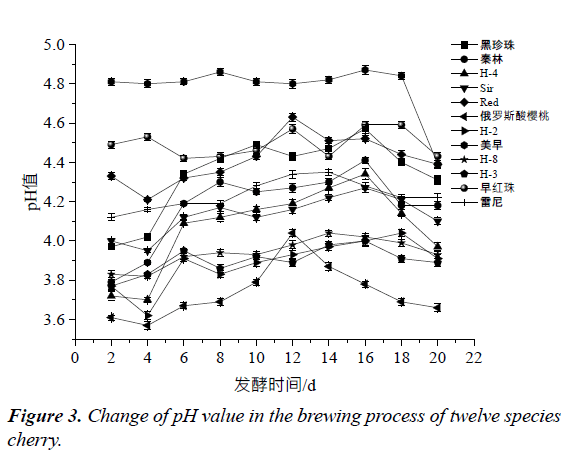 Figure 3. Change of pH value in the brewing process of twelve species cherry.

By analyzing the main components of 12 cherry varieties, the highest pH value was' Zaohongzhu' (4.40), and the lowest was' Russian sour cherry ' (2.11), which indicated that the pH value of sweet cherry varieties was generally around 3~4 while the sour cherry was generally concentrated around 2~3. The highest content of total sugar was "Red", respectively at 13.09 g/100 g and 12.75 g/100 g, which was significantly different from other kinds of cherries (p<0.05). The lowest content of total sugar was "Russian sour Cherry" (7.00 g/100 g). The highest total acid content was' H-2 ' (87.81 g/kg), and the 'Early Red Pearl' content was the lowest, which was 16.43 g/kg. The acid content of the sour cherry varieties was significantly higher than that of sweet cherry varieties.

The changed trend of total sugar content of sour cherry varieties was basically consistent that the sugar content decreased rapidly in the first 8 of fermentation and gradually stabilized in the later stage. The sugar content of "Mei Zao" and "Zao Hongzhu" decreased rapidly compared with other sweet cherry varieties, which had the advantage of short brewing cycle. In the changes of total acid content, the total acid content of sour cherries was significantly higher than sweet ones, "Mei Zao" had the lowest acid content among them; During the fermentation, pH values of all 12 kinds of cherries showed a similar tendency that increasing in the early stage and decreasing in the later stage. The pH value of 'Tieton' was significantly higher than others, and the pH value of 'Russian sour cherries' was the lowest. Although there were significant differences in pH values of different cherry varieties during fermentation, final pH values were maintained between 3.6 and 4.5. It can be seen that different cherry varieties have significant differences in pH value during fermentation and the increase and decrease of pH value has certain differences, which has certain guidance for controlling the pH value of different cherry wines in the later stage.