Szygium cumini is a short-lived fruit enriched in anthocyanins, the characteristic natural pigments and antioxidants. According to the industrial actors, the extracts having these natural pigments may be an alternative to existing synthetic colorants in food and cosmetic products. The anthocyanins are very sensitive to processing conditions therefore this research was attempted to study the integerated effect of other compounds on their stability in S. cumini extracts at different processing conditions mainly temperature (100°C for 10, 20, 40 and 60 min), pH (3, 5, 7) and light (natural light exposure for 2, 4 and 6 hours). Treated S. cumini extract was evaluated for total phenolic content by Folin- Ciocalteu Reagent and antioxidant potential by DPPH. From the instant exploration, it was deduced that stability of anthocyanins can only be seen for temperature at 10 and 20 minutes and duration of light treatment increases the activity of anthocyanin and antioxidant activity, whereas the pH stability of polyphenols and antioxidant activity could be seen at 3 and 5 pH respectively

Jamun (Syzygium cumini) is one of the underutilized fruit whose production, manufacturation and utilization are not properly entertained in Pakistan. S. cumini fruit is always pleasing to intake for its color, taste (sweetish sour) and flavour [1]. The harvesting of S. cumini takes place once in a year in the months of June and July. The ripe fruits are used for valuable products like jam, health drinks, and making preserves and wine [2]. S. cumini contains vitamins A and C, malaic acid, nicotinic acid, folic acid, calcium, potassium, sodium, iron, zinc, manganese and phosphorus [3]. Beside nutritional use, all parts of fruit mainly the seeds are used to cure a large range of diseases [4], the most important of which is diabetes mellitus [5,6]. S. cumini particular from Punjab region of Pakistan is beneficial for treating breast cancer [7]. Phytochemicals and anti-oxidants present in plants are helpful for the human body in a variety of ways as they have ability to protect against chronic, neurodegenerative diseases, and in the aging process [8]. Anthocyanin is major polyphenol present in S. cumini which also gives the purple colour to the fruit and responsible for its antioxidant activity [9]. These pigments could be a good source of natural food colorants for food processing industry [10]. Anthocyanin has shown antagonistic activity to some virus, fungi and bacteria and also protects food from microbial spoilage [11].

Phytochemicals and antioxidants are very unstable compounds and change their color with slight change in medium conditions. Heat, pH and light are among the important factors that can affect the stability of polyphenols and antioxidants compounds. These compounds vary by the effect of thermal processes due to their relation with chemical structure, concentration, localization in the cell, type of thermal processing applied and interaction with other food components [12]. Mazzeo et al. [13] studied the effect of boiling and steaming on carrot, cauliflower and spinach, they conclude that boiling effect cause huge effect on nutritional components of freezed vegetables as compare to steaming, leading to loss of polyphenols. Blanching treatment on Irish York cabbage was also examined, which shown a significant decrease of polyphenols at treatment of 80-100˚C with 72 to 84% loss of antioxidant capacity [14].

The chemical composition of Jamun fruit has been studied in Pakistan but there is no Information regarding effect of processing conditions on polyphenols and antioxidant potential of S. cumini. The present study was therefore undertaken to explore some effect of processing conditions (heat, light and pH) on bioactive and antioxidant compounds of S. cumini fruit.

Fresh Jamun fruits were collected from the fruit markets of Faisalabad city, Punjab province of Pakistan. The fruits were graded on the basis of maturation and ruptured fruits were discarded. The fresh and fully ripened fruits were shifted to laboratory immediately. The fruits were washed and dried at room temperature different parts of fruit such as pulp, seed and fruit coat were separated manually and pulp was collected and filled in polythene bags. The sealed bags were stored at freezing temperature until analysis.

Extraction of pulp was performed using ethanol, a food grade high polarity solvent. Extracting solvent prepared was consisting of ethanol and water in a ratio 1:1 (20 ml of each) and 10 ml of diluted sulphuric acid was poured into it (to maintain the purplish colour of sample). 1 g of fruit pulp was poured in extracting solvent and extraction was done using magnetic stirrer at 90 rpm and 50C for 1 hour. The mixture was separated out through filtration and the filtrate was centrifuged. The supernatant was collected and kept in the dark at 4°C until further analysis.

Three processing treatments were applied on extracts to determine their effect on bioactivity of Syzygium cumin pulp.

The extracted samples of S. cumini pulp were placed in oven in 4 opened beakers at 100°C for different time periods of 10, 20, 40 and 60 min [15]. The thermal effect was observed after each settled time.

Samples were gone through natural light treatments (exposure for 2, 4 and 6 hours) to check changes if any in its bioactivity [16]. Prepared sample was poured in 3 beakers which were placed under natural sun light.

The approximate pH of S. cumini is 3-4 respectively [17]. In this experiment 3 different pH levels were selected to evaluate the stability of S. cumini polyphenols by the method described by Chen et al. [18]. The extracting solvent was set to desired pH range (3, 5 and 7) with the help of sulphuric acid. Three different extracting solvents were prepared such as each had a specific pH range of (3, 5 and 7). Extraction was done by placing samples in each of them separately.

Total phenolic contents (TPC) were determined by spectrophotometric method using Folin-Ciocalteu reagent. Briefly 1 ml of 10% Folin-Ciocalteu reagent was added to a 0.5 ml of a known concentration of the sample. The mixture was mixed well and left for 6 min, and then 2 ml of a 20% sodium carbonate solution was added in the above mixture. The phenols was measured at 760 nm using the spectrophotometer after reacting for 60 min at 30˚C. A calibration curve was prepared using standard solution of gallic acid and the results of total phenols was expressed as lg of gallic acid equivalents (GAE) per gram of sample.

DPPH (2,2-diphenyl-1-picrylhydrazyl) is a stable highly colored free radical that can abstract labile hydrogen atoms from phenolic antioxidants with concomitant formation of a colorless hydrazine (DPPH-H) [19]. The free radicalscavenging activity (FRSA) of an extract can be expressed as the percentage of DPPH reduced by a given amount of extract. The FRSA of the extracts was evaluated according to the method described by Mimica Dukic, with some modifications. The extract was dissolved in 50% (v/v) aqueous methanol with a final concentration of 5 g/L. A small volume (0.1 ml) of the extract solution was mixed with 2.0 ml of a 0.1 ml DPPH solution in MeOH and the mixture was left in the dark at room temperature for 60 min. The absorbance was measured at 517 nm. The total FRSA of each extract was expressed as the percentage of DPPH reduced and was calculated by the following equation: FRSA=100 - (initial absorbance - final absorbance)/initial absorbance. The initial absorbance and final absorbance were the absorbance values of DPPH at time zero and after 60 min, respectively.

Thermal treatment: The TPC on thermally treated S. cumini fruit observed was (0.5460 for 10 min, 0.4857 for 20 min, 0.3427 for 40 min and 0.2817 for 60 min) whereas FRSA of thermally treated S. cumini fruit observed for different time intervals was (0.5127 for 10 min, 0.4410 for 20 min, 0.2983 for 40 min and 0.2694 for 60 min). We observed that S. cumini retains its stability for 10 min of duration; Decrease in absorbance is the evident of degradation of anthocyanin at high temperature as shown in Figure 1. The past research on the influence of time durations of thermal processing on berries quality also revealed the same outcome of decrement of polyphenols and antioxidants activity of berries with the increment of time [15]. Moreover, in most of the previous work the investigators found that the duration of thermal processing of fruits and vegetables decreases the contents of their bioactive compounds [20,21]. Thermal treatment for 40 and 60 min has shown great decrement of bioactive compounds in S. cumini. Similar results were reported by Mpiana et al. [22] when they studied antisickling activity and thermostability of anthocyanins extracts from a Congolese plant (Table 1). 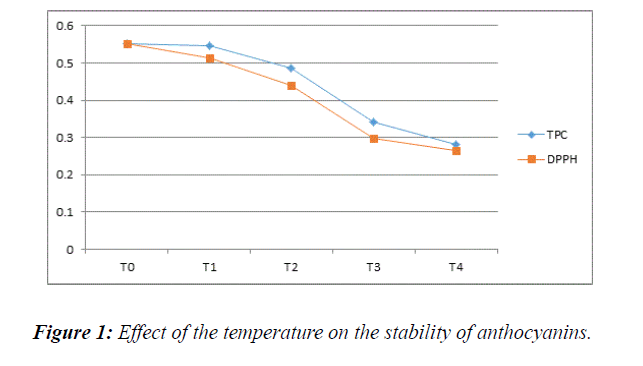 Figure 1: Effect of the temperature on the stability of anthocyanins.

Light treatment: The TPC of light treated S. cumini observed from our result was (0.5830 for 2 hours, 0.6134 for 4 hours and 0.6590 for 6 hours) whereas FRSA of treated S. cumini extracts was (0.5620 for 2 hours, 0.6399 for 4 hours and 0.7012 for 6 hours). The effect of light treatment on S. cumini reveals that the bioactivity of polyphenols and antioxidant activity of fruit increases with the duration of light exposure. Figure 2 illustrate that S. cumini extracts expose in light for 6 hours showed higher FRSA and TPC activity among all treatment times. This may be because the energy present in light can enhance the nutritional and functional components of the fruit. The result outcomes of light treatment on bioactivity of polyphenol compounds of S. cumini closely matched with the results of Qian li et al. [23] when they investigated the effects of supplemental light on phytochemicals of baby lettuce. The study by Pek et al. [16] on effect of natural light on changes in antioxidant and color parameters on vine-riped tomato fruit also revealed that exposure of tomatoes to natural light enhances the nutritional components of tomatoes to higher content as compare to those tomatoes which were kept in shade (Table 2). 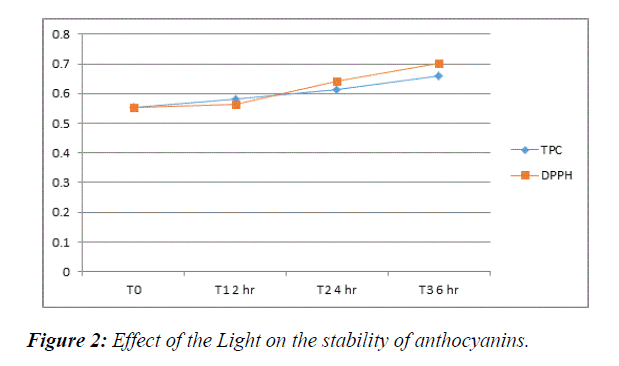 Figure 2: Effect of the Light on the stability of anthocyanins.

pH treatment: The TPC for different pH observed were (0.50300 at 3 pH, 0.5188 at 5 pH and 0.4874 at 7 pH) whereas antioxidants of pH treated S. cumini were (0.5172 at 3 pH, 0.5762 at 5 pH and 0.4638 at 7 pH). Bioactivity of polyphenols and antioxidant activity varies for different pH extracts. S. cumini fruit have pH between 3-4 normally [17] which shows that this fruit is acidic in nature. We set three different pH values of extracting solvent in which extraction was done. After the analysis it was seen that bioactivity of polyphenols and antioxidant activity remain stable for the extract having pH 3 and 5, while the highest degradation of polyphenols and antioxidants were observed for the extract of 7 pH as the absorbance decreases in high pH as shown in Figure 3. This revealed that the anthocyanins were not stable under alkaline pH and is stable under acidic pH values (Table 3). 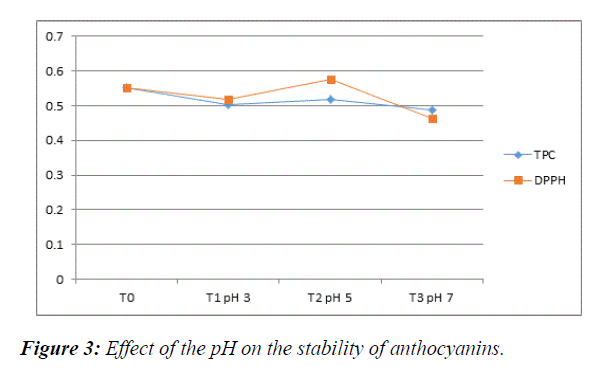 Figure 3: Effect of the pH on the stability of anthocyanins.

The effect of pH on stability of betacyanin pigments was studied by Karthiga, in which they concluded that betacyanin was very unstable in alkaline conditions whereas under acidic condition it was stable, this outcome relates to our research at some extent. Rakkimuthu et al. [24] reported similar results in C. hirsutus fruit extract, where the anthocyanins were stable at pH 1 and 3 and revealed highest degradation at pH ≥ 7.0 [25].