The Ota nevus or nevus fuscocaerulus ophtalmomaxillaris, recently named oculodermic melanocytosis, was described by the Japanese Ota in 1939. It consists of cutaneous hyperpigmentation in the territory of the first and second trigeminal branches, associated with ocular melanocytosis. This abnormal pigmentation is due to the aberrant migration of the cells of the neural crest, these cells being the embryological precursors of melanocytes. The sectoral form of the Ota nevi is rare.

This is a 42-year-old patient who consults for a change of optic correction, for whom the systematic examination reveals a sectoral iris heterochromia evolving since her childhood and which increases discreetly in size, according to the patient. Clinical examination finds patches of blue-slate color in the skin (in the territory of the first branch of the trigeminal) and in the sclera (Figure 1). The iris presents a sectoral hyperpigmentation ranging from 6 hours to 1 hour (Figure 2). This makes it possible to make the diagnosis of sectoral oculodermal melanocytosis. Intraocular pressure is normal. At the back of the eye, bilateral papillary excavation at 3/10 is noted. 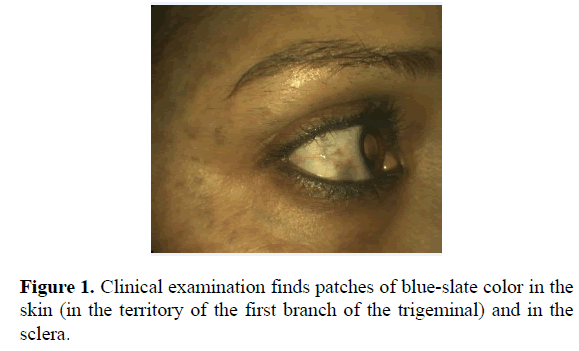 Figure 1: Clinical examination finds patches of blue-slate color in the skin (in the territory of the first branch of the trigeminal) and in the sclera.

Figure 2: The iris presents a sectoral hyperpigmentation ranging from 6 hours to 1 hour.

Oculodermal melanocytosis can be diffuse (affecting all quadrants of the eye) or sectoral (only interesting part of the eye). The latter is rarely reported in the literature [1]. The relationship between sectoral melanocytosis and uveal melanoma has been suggested in many publications [2-5].

The risk of degeneration of oculodermic melanocytosis, all forms combined, is estimated at approximately 1 in 400. However, the exact risk of transformation of the sectoral form is still unknown [1]. In a series of 89 eyes with oculodermic sectoral melanocytosis [1], 7 patients presented with melanoma, and this was in the hyperpigmented zone. That said, the importance of monitoring these patients at high risk of degeneration.

The second complication of this pathology is represented by glaucoma, which occurs in 10% of cases. It is thought to be related to a blockage of the circulation of the aqueous humor, in relation with the accumulation of melanocytes at the level of the trabeculum.

Patients with oculodermic melanocytosis should be informed about the potential risk of developing glaucoma and melanoma, especially uveal. Periodic monitoring is necessary, with measurement of intraocular pressure and complete ophthalmological examination.