Diseases caused by food pathogens contaminate food at any stages of food production, delivery and consumption in a food chain. The diseases can result from several forms of environmental contamination including water, soil, or air pollution, as well as unsafe food storage and processing [1]. Diseases transmitted through contaminated food can lead to public health problem [2]. These diseases contribute significantly to the global burden of disease and mortality. Annually, millions of persons become ill from foodborne diseases. In Nigeria and other parts of developing world, many of the foodborne cases ranging from mild to severe cases have always been reported [3].

Food poisoning cause by Staphylococcus species is a global challenge which has cause so many illnesses among the populations of the world and has also resulted to high cost of treatments and so many deaths [4]. In Nigeria, there are so many health cases which are attributed to consumption of foods that are contaminated by Staphylococcus species [5]. Most of the food samples hawked by the road sides in Nigeria are vulnerable to various source of contamination [6].

‘Awara’ is a local fried soya beans cake or cheese, commonly sold in northern Nigeria and is a cheap source of protein which is mostly consumed among middle class consumer and the poor classes of the northerners. It can also be taken at any time of the day as a snack [4-7]. The challenges with the production of ‘Awara’ is that they are usually fried by the road sides which predispose to contaminations by various pathogenic microorganisms most of which may be associated with foodborne poisonings [4] and sometimes the vendors used their hands to serve their customers instead of using spoons or fork where Staphylococcus species may be transmitted to the food and contaminate it [5].

The study was conducted in Wukari local government area of Taraba state, which is located in North–Eastern region of Nigeria at southern guinea savanna with coordinate’s latitude 7°, 51’N-7.850°N and longitude 9°, 47’E-9.783°E, annual precipitation of 1205 mm and it has an average temperature of 26.8°. This research took place during the raining season 2021.

A total of number twelve (12) samples were collected from four (4) locations of the Wukari old market. Five (5) samples from each of the four locations from the vendors/hawkers within the market. The samples were collected in sterile polythene bags directly from the sellers and immediately taken to the laboratory of the Department of Microbiology, Federal University Wukari for microbial analysis.

Total bacterial count was carried out using pour plate method [10,11]. Twenty-five gram of the food sample was placed in sterile 225 ml buffer peptone water to obtain a ratio of 1:10 and was thoroughly mixed, from which 1 ml was transferred to the first test tube containing 9 ml of buffer peptone water as diluent. This was repeated in other sets of the tubes containing 9 ml of the buffer peptone water to dilute to 10- 8. The procedure was repeated for each sample. From the last two dilutions, 0. 1 ml each was dispensed to the center of Petri dishes. Prepared and cooled molten nutrient agar and mannitol salt agar were poured into the Petri dishes, gently swirl and allowed to solidified and incubated at 37°C for 24 hours. At the end of incubation, plates with 30-300 colonies were counted using a colony counter and average was taken.

The colony forming unit was calculated as:

The medium mannitol salt agar was used for isolation and enumeration of Staphylococcus species. Gram staining technique was carried out to identify the morphology of the pathogens [12]. The biochemical tests carried used to identify Staphylococcus species include catalase, coagulase, citrate utilisation, haemolysin, indole, oxidase and urease tests.

Dilution from each of the suspension of the test isolates was prepared by picking a 24 h colony of the isolates using sterile wire loop into sterile test tube containing sterile normal saline to form turbidity that match with 0.5 scale of McFarland’s standard (1.5 × 108 cells/ml) [12].

Staphylococcus isolates were subjected to antibiotics to determine their susceptibility by means of disc diffusion method [13]. Broth culture of the test organisms’ equivalent to 0.5 McFarland standards were used to inoculate plates of Mueller-Hinton agar using sterile swabs. Antibiotic impregnated discs were placed on the plates of the pathogens and incubated at 37°C for 24 hours. Zones of inhibitions were measured and the results were interpreted [14] and all the results were recorded appropriately.

The morphological and biochemical characteristics of Staphylococcus species isolated from Awara sold in Wukari old market revealed that two species (Staphylococcus aureus and Staphylococcus epidermidis) were identified as presented in Table 2.

Table 2. Biochemical characteristics of all Staphylococcus species isolated from the food sample. 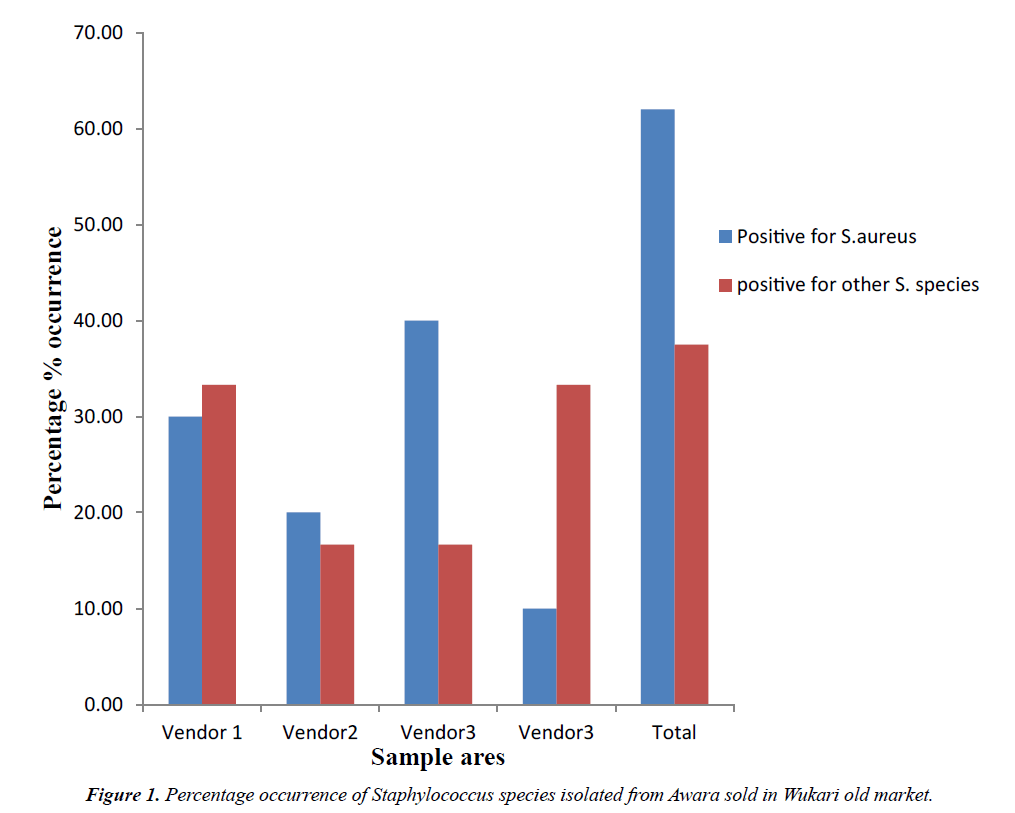 Antibiotics susceptibility of Staphylococcus species isolated from the food sample as presented in Table 3 shows that the isolates were 100% susceptible to Gentamycin (CN), none of the isolates was susceptible to Ciprofloxacin (CPX), Erythromycin (E), Levofloxacin (LEV), Ampiclox (APX) and Amoxil (AML). Fifty (50%), Thirty (30%) and Ten (10%) were resistant to Norfloxacin (NB), Rifampicin (RD) and Chloramphenicol (CH) respectively.

Staphylococcus aureus is an important food poisoning organism because it’s widely distribution in nature. Staphylococcus aureus could be transmitted to foods when contaminated food products are used as constituents in the processing of the foods. The isolation of S. aureus in Awara samples implies extreme contamination and potential health risk associated with these food samples [15].

The processing of this food normally involves heat treatment; it is obvious that considerable number of bacteria associated with raw materials would have been killed or suppressed during production [16]. From this research result there was high bacterial load on the food sample collected, this could occur as a result of contamination due to exposure and the handling of the food [17]. Therefore, the high microbial load on the foods could be due poor sanitary conditions during preparation, storage and personal hygiene of the food handlers [18].

The drug resistance among the Staphylococcus species could be due indiscriminate used of the antibiotics in the community where the bacteria were isolated [22]. The Multiple Antibiotic Resistances (MAR) index used in this study was 0.1 MAR index. This gives an indirect suggestion of the probable source of the organism and MAR index greater than 0.2, it indicates that the organism must have originated from an environment where these antibiotics are frequently used [22].

The antimicrobial resistance patterns of Staphylococcus aureus from foods are useful in epidemiological studies, as it provides adequate awareness about the safety of consumable foods contaminated with high level of potential microbes for food borne disease outbreak, resulting to a distribution that cannot be controlled and thus bringing about changes in public health and deterioration thereby increasing susceptibility rate [23].

Total bacterial count in the food samples ranged from 1.00 x 105 to 1.80 x 106 CFU/ml and the staphylococcal count on mannitol salt agar ranged from 1.2 x 105 to 8.0 x 105 CFU/ ml. The percentage occurrence of Staphylococcus species showed that 62.50% were Staphylococcus aureus isolates, while 37.50% were other species. None of the Staphylococcus species were ciprofloxacin, erythromycin, levofloxacin, gentamycin, ampiclox amoxil, streptomycin and some species were resistant to rifampicin (30%), rorfloxacin (50%), and chloramphenicol (10%). Two of the isolates had MAR index of 0.2 and one of the isolates had MAR index of 0.3. The bacterial load and presence of some resistant Staphylococcus species in the food sample can pose threat to human health in the study area. It is therefore, important to keep Awara fit for consumption by taking adequate measures to prevent contamination during and after production.