The study reports efficacy of Luvunga scandens Roxb. berry essential oil (LSEO) as antifungal, aflatoxin inhibitory and as antioxidant. Aspergillus flavus LHP-PV1 was taken as test fungus. Antifungal activity of the LSEO was done by food poisoning method and minimum inhibitory concentration (MIC) was found to be 3.5 μl/ml. Antiaflatoxigenic activity of LSEO was assessed in terms of minimum aflatoxin inhibitory concentration (MAIC) which was found to be 1.75 μl/ml. Total phenolic content of LSEO was found to be 4.45 μg/mg. LSEO also possess strong antioxidant activity, which was assayed by using 2,2-diphenyl-1-picrylhydrazyl (DPPH) having IC50 value equal 3.61 μl/ml. Strong antifungal, antiaflatoxigenic, and antioxidant potency of LSEO make it suitable for recommendation as plant-based preservative for food commodities during post-harvest storage.

The economic growth of developing countries is directly related with the agriculture. Production of multiple crops annually makes tropical and subtropical belt as epicentre of food production. Hot and humid environment of tropical and subtropical belt make them prone to attack of pests which further leads to huge loss of produce, creating catastrophic condition followed by famine in the related zone [1]. Among different pests, molds and mycotoxin contamination during post-harvest processing creates severe problem. Out of different reported mycotoxins, Aflatoxin B1 drags maximum attention of scientific community, because of its hazardous effects over animal and plant systems. In animals, including human being, they are reportedly acted as carcinogen, mutagen, hepatotoxicant, cause intoxication, listlessness, anorexia as well as inhibition of lipid and protein synthesis [2,3]. In plant system the functioning of vital cellular enzymes, photopigments and germination ability are also reduced significantly by aflatoxins [4]. Thermo stable nature of aflatoxin ensures their presence even in cooked food and they are also reported to promote generation of reactive oxygen species in food system [5]. The deteriorative effect of free radical over different biomolecules are also well reported [6]. Hence, toxigenic mold can causes both qualitative and quantitative loss to the stored food items. Based on aforementioned facts there is urgent need to control such factors in order to prevent food commodities from fungal as well as mycotoxin contamination. Although synthetic preservative are available against mold contamination and free radical generation but multiple side effects to human health are caused by synthetics preservatives due to residual toxicity provoking the utilization of some safer preservatives [7]. In this connection plant essential oil gains momentum among variety of plant product due to their volatile nature, utilization in traditional pharmaceutical preparation and most of them are kept in generally recognised as safe (GRAS) category and offering a safe and ecochemical approach to prevent stored food commodities from fungal and subsequent mycotoxin contamination [8]. Luvunga scandens belonging to family rutaceae, is native to North-East India, acting as antidote against snake bite and leaves are useful in ringworm [9]. In addition to this, the LSEO has reported insecticidal [10-12] and antifungal activity [13]. But, no report is available, for its activity against aflatoxin production. Therefore, present study is designed to assess the potency of Luvunga scandens EO as antifungal, antiaflatoxigenic and antioxidant plant product.

The toxigenic isolate of Aspergillus flavus ie. A. flavus LHPPV- 1 was selected as the test fungus for assessing the bioactivity of Luvunga scandens EO. This toxigenic isolate was obtained from mycoflora analysis of Pistacia vera sample. Potato Dextrose Agar (PDA) slants at 4°C was used for maintaining culture of fungus.

A seven days old culture of A. flavus LHP-PV-1 was used for preparation of spore suspension. Completely grown upper layer of fungal mat was scrapped and then filtered in 0.1% Tween-20 solution in distilled water. Spore density was maintained to 106 spores per mL by using haemocytometer. The spore suspension was preserved at 4°C [14].

Plant material and extraction of the essential oil

Berries of Luvunga scandens were collected from local medicinal plant market of Varanasi. Sample was identified by Prof. Dubey, Department of Botany, Banaras Hindu University, Varansi and the voucher specimen (Voucher specimen No. Ruta. 2016/2) was deposited in herbarium. The berris were then subjected to Clevenger hydro-distillation apparatus for four hours [15]. The EO fraction was separated and a pinch of sodium sulphate was added into isolated EO to absorb water droplets present as impurity. The separated EO was stored in dry amber vial at 4°C.

Method of Gholivand et al. [16] followed for determination of total phenolic content of Luvunga scandens EO by using the Folin-Ciocalteu reagent followed by spectrophotometric mesurement. A solution having 0.1 ml DMSO and 1000 μg EO was prepared and mixed with 46 ml of distilled water in a volumetric flask. The prepared solution was added with 1 ml Folin-Ciocalteu reagent and the mixture was thoroughly shaken using an electronic shaker followed by rest for 3 min to allow complete reaction. The solution was then added with three milliliters aqueous solution of 2% Na2CO3 and was incubated for 4 h at room temperature (25 ± 2°C). After incubation, the absorbance of each mixture was recorded at 760 nm. The similat protocol was also applied to standard solutions of gallic acid (0- 1000 μg/0.1 ml) and a standard curve was plotted. Total phenolic content of the oil was measured by comparing the absorbance value of the EO at 760 nm with the standard curve and expressed as μg gallic acid equivalent/mg of oil. Absorbance=0.0012 x gallic acid (μg)+0.024

Evaluation of toxicity of LSEO against A. flavus strain LHP-PV-1

Poisoned food technique was used to measure the toxicity of LSEO against A. flavus isolate LHP-PV-1 in terms of minimal inhibitory concentration (MIC) and minimal fungicidal concentration (MFC). Requisite amount of the EO was added separately in Petri plates containing 0.5 ml Tween-20(5%) and then 9.5 mL PDA was added to obtain different concentrations (0.25 to 5.0 μl/ml). Ten microliter spore suspension of A. flavus LHP-PV-1 isolate was inoculated onto prepared Petri plates. The control sets contained PDA with Tween-20(5%) but no EO. The inoculated Petri plates were incubated at 27 ± 2°C for 7 days. The diameter of A. flavus colonies of both treatment and control sets was measured. The lowest concentration, at which the growth of the A. flavus LHP-PV-1 was completely suppressed, considered as the MIC. MFC was determined following Kumar et al. [17] with slight modification. For this, the PDA medium disc of oil treated sets were cut out with the help of a cork borer and re-inoculated on fresh medium, and revival of their growth was observed after 7 days. The lowest concentration stopping revival of fungal growth was taken as the MFC. The percent growth inhibition was calculated following Pandey et al., 1982.

Evaluation of LSEO as aflatoxin B1 suppressor

Required amounts of Luvunga scandens EO were dissolved separately in 0.5 ml Tween-20 (5%) and added to 24.5 ml SMKY to achieve concentrations ranging from 0.25 to 3.5 μl/ml, in an Erlenmeyer flask (100 ml). Streptomycin (300 mg/l) was added to SMKY medium for preventing bacterial growth. In each set 25 μl A. flavus LHP-PV-1 (106 spores/ ml) was inoculated and then incubated for ten days at (27 ± 2°C). After incubation, the content of each flask was filtered by What man No. 1 filter paper and the filtered mycelium was oven dried at 80°C (12 h) to measure the biomass (Figures 1 and 2). The filtrate was then added with 20 ml chloroform in a separating funnel to extract the dissolved toxin. The chloroform extract was subjected to water bath at 70 oC and evaporated till dryness. The residue was dissolved in 1 ml chloroform. A 50 μl aliquot of dissolved aflatoxin was spotted on TLC plate (20×20 cm2 of silica gel). The TLC plate was developed in toluene/ isoamyl alcohol/ methanol (90:32:2;v/v/v) solvent system [18]. Ultraviolet fluorescence analysis cabinet at an excitation wavelength of 360 nm was utilized for observing the intensity of aflatoxin B1 (AOAC, 1984). The blue spots of AFB1 developed over TLC plate were scraped out and dissolved in 5 ml cold methanol, shaken and centrifuged at 3000g for 5 min. The optical density of supernatant was recorded at 360 nm, and the amount of AFB1 was measured following [19].

During hydrodistillation the percent recovery of LS EO was recorded to be 3.2% w/w. The EO was colourless and with sharp odour (Table 1). The phenolic content of LSEO was found to be 4.45 μg/mg. Phenolic compounds have crucial role as an antifungal and aflatoxin inhibitory agent by mitigating oxidative stress in the fungus [21].The phenolic compounds have also been reported responsible for development of resistance in natural food grains against mycotoxin contamination [22]. The presence of phenolics in LSEO strengthens its possible application against mycotoxin contamination The minimum concentration for complete inhibition of growth (MIC) of the toxigenic strain A. flavus LHP-PV1 of LSEO was found to be 3.5 μl/ml (Figure 1) and the funicidal concentration (MFC) was found to be more than 5.0 μl/ml. The MIC of LSEO was found lower than some previously reported synthetic preservative such as BHT, gallic acid and ascorbic acid [20], proves its superiority over traditionally used synthetic preservatives. A dose dependent reduction in aflatoxin production as well as fungal biomass was observed in LSEO treated set of A. flavus LHP-PV-1 grown in SMKY medium. The complete inhibition of aflatoxin production was found to be at 1.75 μl/ml (MAIC) which is very less than the MIC of the LSEO (3.5 μl/ml) (Table 1). This suggests that the LSEO completely check the production of aflatoxin B1 at half of the MIC. Reduction in fungal biomass leads to significant decrement in AFB1 production. Hence, to decrease the AFB1 production, fungal growth must be below the threshold level so that aflatoxin could not be produced. Different value for MIC and MAIC also suggests separate pathway for growth inhibition as well as for inhibition of aflatoxin production by LSEO. Hydrophobicity, of EO and its components causes breakage of lipid bi-layer of cell membrane and mitochondria resulting into enhanced cell permeability and finally leakage of ion and other cell conten [23-25]. Essential oil also inhibits the fungal growth by reducing the synthesis of ergosterol content of fungal cell membrane [26]. The LSEO also possess strong antioxidant activity, which was assayed by using DPPH having IC50 value equal 3.61 μl/ml (Figure 2).

Table 1. Effect of different concentrations of LSEO on aflatoxin B1 production and dry weight of A. flavus LHP-PV-1 in terms of percent inhibition.

Note: The means followed by same letter in the same column are not significantly different according to ANOVA and Tukey’s multiple comparison tests. SE: Standard Error. 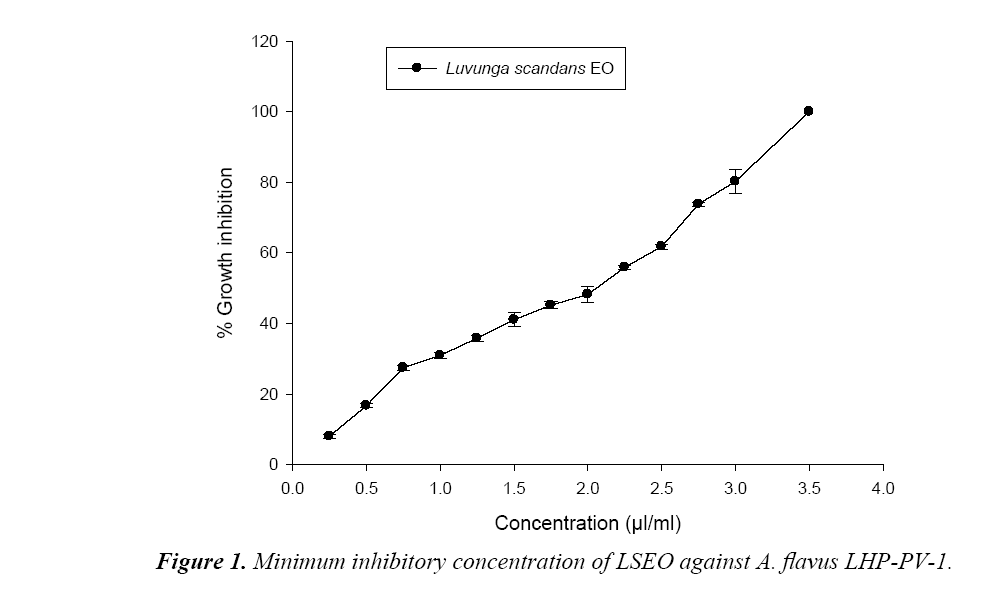 Figure 1: Minimum inhibitory concentration of LSEO against A. flavus LHP-PV-1. 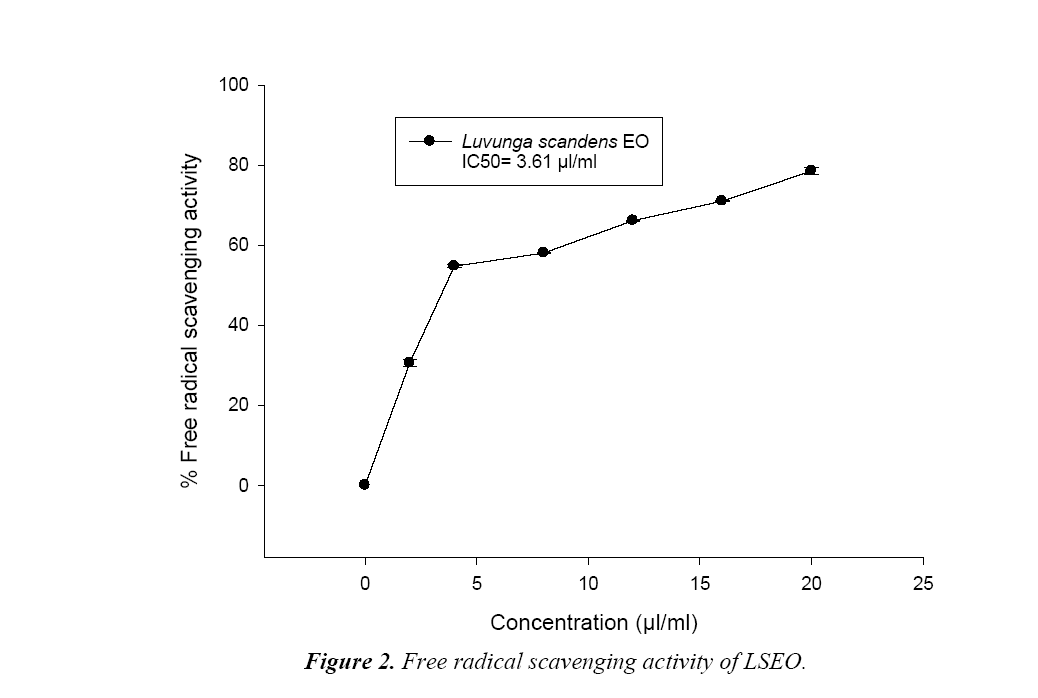 The presence of phenolic compounds is also a reason of strong antioxidant activity of the EOs [27]. Since, an ideal preservative should have both antimicrobial as well as antioxidant activity and reduced oxidative stress also causes decrement in aflatoxin production by A. flavus [4]. The antioxidant activity of LSEO is also better than some previously reported EO such as Mentha spicata [28], Lavandula officinalis, Petroselinum crispum, [29]; Semenovia tragioides [30] and Eucalyptus gunnii [31] which suggests the utility of LSEO as antioxidant over aforementioned EOs Promising activity of LSEO as antifungal, antiaflatoxigenic and as antioxidant justify its suitability for preservation of post harvest food items during storage. Due to volatile nature, the LSEO may be utilized as fumigant for stored food commodities and can also be easily eliminated from food items. However, for deciding the dose of LSEO as fumigant in food systems the storage condition, type of food items and fungal inoculum density should be kept in mind [32-34].

Based on strong antifungal, antiaflatoxigenic and antioxidant activity as well as the use of LSEO in traditional system of medicine, the LSEO can be recommended as preservative of stored food material for protection against deterioration caused by fungal and aflatoxin contamination. However, the findings of present study would deepen the interest of scientific community and food industries to conduct experiment for large scale application of LSEO as preservative.