In this research, the effect of radiation-processed oligo-chitosan on post-harvest loss of litchi fruit was investigated. Different concentrations of irradiated (40 kGy) chitosan solution (500, 1000 and 1500 ppm) were sprayed on litchi fruits both in stalked and stalkless form. Then the treated and untreated litchis were stored in different atmospheric conditions such as at (a) room environment (open and polythene covered) and (b) at 4°C in zip-bag. Fruits coated with irradiated chitosan showed significant delays in the change of weight loss, aesthetic view and microbial count as compared with the uncoated control fruits. The best result was achieved for storage in room temperature at 1500 ppm irradiated chitosan sprayed litchis, where up to 7 days litchis were in good quality. Further improvement was achieved by keeping the litchis in zip lock bag at 4°C. In this case, litchis maintained edible quality with proper aesthetic view up to 21 days. Peeled litchis were also stored at 4°C in air-tight jar in formulated chitosan solution where they maintained edible quality up to 4 months.

Litchi (Litchi chinensis Sonn.) is a widely accepted subtropical fruit with significant commercial value. Bangladesh has a good export potential being the second largest producer of litchi in South Asia [1]. Only about 10% of produced litchi can be processed because of its highly perishable nature [2]. The major loss of litchi fruits occurs due to damage during postharvest handling. Both microbial growth and browning enzyme such as peroxidase (POD) and polyphenoloxidase (PPO) can act together to accelerate damage of fruits by taking the advantage of minor injury in pericarp. As a result, quality and aesthetic value is reduced [3,4]. Poor storage facility, non-available cold chain and transportation injury contribute to the postharvest loss of litchi up to 50% [1]. Different studies have been reported on the preservation strategies of whole fruits such as chitosan coating [4]; chilled storage [5]; plastic films [3]; irradiation [1]; controlled atmosphere [6]; anti browning agents, osmo-vacuum drying and moderate vacuum packaging [7]; acid dipping, chemical coatings [8] and thermal processing [9]. Processing of peeled fruit using chitosan coating and subsequent chilled storage is another useful alternative [10].

Chitosan is the second most available natural polymer produced by deacetylating chitin. The major sources are the crustacean shells [11]. The recent commercial applications of chitosan in different sectors; even the use of chitosan in the past decades have made it an attractive mean [12,13]. In these days crab and shrimp shell wastes are used to produce chitosan with different molecular weights and deacetylation grades and thus with different functional properties [11,14]. Chitosan is insoluble in water and soluble in solutions of weak organic acid. Some chitosan derivatives (acetate, lactate, ascorbate, and malate) are water-soluble [15].

Chitosan has the ability to act against the food-borne yeast, bacteria and filamentous fungi and that’s why it is considered as a potential food preservative [16]. Chitosan has also been found to possess a film-forming ability to be used as edible coatings [17-19]. This coating can decrease transpiration, control the internal atmosphere and thus poses a positive effect on fruit’s shelf-life [20,21]. In recent studies chitosan is characterized mostly as a bacteriostatic agent [22]. Yet the full mechanism is not well understood and may be involved with the activities of other molecules [23]. Antimicrobial activity may differ depending on different species as the charges of surface area of related microbes differs [24].

Peeled litchis have priority to consumers due to ease in consuming and serving. But this form is very perishable for lacking pericarp and higher dehydration rate of the open pulp [25]. But edible coating can be helpful for the recovery andminimizing the weight loss of litchi fruits [21,26].

Accordingly, the present study was aimed to reduce the pericarp browning and arial decay of litchi fruits using chitosan. Emphasis was focused on developing the easy, low cost and effective strategies of improving litchi storability during its postharvest storage. Storage of peeled litchis also studied here to find out the probable extendable shelf life by using chitosan.

Mature litchis (variety Bombai) were obtained from a local garden of Shonargaon of Narayanganj near Dhaka, Bangladesh and transported to the laboratory of Institute of Radiation and Polymer Technology (IRPT), Atomic Energy Research Establishment (AERE), Savar, Dhaka (transportation time was 4 hours). Fruits of same variety were selected according to good appearance and free from infection and mechanical injuries.

Irradiated Chitosan and edible coating formulations were prepared in the laboratory from prawn shell using chemical extraction method [27]. Degree of deacetylation of the chitosan was 83%. 20 g of chitosan was dissolved in 2% acetic acid in distilled water to prepare 1 L of 2% chitosan solution and subjected to 40 kGy gamma radiation. The gamma irradiation was carried out by Co-60 gamma radiation source situated in IRPT, AERE, Savar, Dhaka at a dose rate of 11.5 kGy per hour.

Coating Application on Litchis was randomly distributed into various groups. One group is in ambient atmosphere both in open air and covered in polyethylene sheet. Other group was in zip-lock bag at refrigerator at 4°C. In case of ambient atmosphere four assemblies were assigned where each to one of four treatments as described in the next sentence whilst the fifth assembly provided untreated control. Samples (with stalk) kept in ambient atmosphere were denoted by LA-1: Control, LA-2: 1000 ppm chitosan sprayed (open), LA-3: 1000 ppm chitosan sprayed (covered) LA-4 1500 ppm chitosan sprayed (open), LA-5 1500 ppm chitosan sprayed (covered). Each assembly comprises with 20 pieces of litchis. Samples kept in refrigerator at 4°C were divided in two groups like litchis with stalk and stalk-less litchi. Samples were denoted by L-1: control, L-2: 500 ppm, L-3: 1000 ppm, L-4: 1500 ppm (litchis with stalk) and L-5: control, L-6: 500 ppm, L-7: 1000 ppm, L-8: 1500 ppm chitosan treated respectively (stalk less). All the samples were covered by polyethylene sheet as uncovered samples were subjected to very rapid moisture loss in the refrigerator. Fruits were washed using distilled water, air dried at room temperature and then irradiated chitosan solutions were applied (by spraying). After the treatment, fruits were air dried and stored at ambient environment (30 ± 1°C / 75 ± 5% RH) up to 7 days and at refrigerator at 4°C for 21 days. Litchis were analyzed for different parameters at a regular interval of 5 days.

Sensory evaluation was done to evaluate taste, flavor and aroma of the preserved litchis. A panel of ten judges with age ranging from 25-35 years was selected on their consistency and reliability of judgment. Panelists were asked to rate the difference between samples by allotting the numbers from 0-9, where 0-2 represent extremely dislike, 3-5 for dislike, 6-8 for good and 9 for excellent aroma, taste and flavor.

Biochemical Analysis, Moisture content etc. were determined according to the official methods of analysis of the Association of Official Analytical Chemists (AOAC, 1990) [28].

Oligo chitosan was prepared by irradiating the chitosan solution by gamma radiation at 40 kGy radiation dose. Then the peel-off litchi samples were dipped into oligo chitosan formulations of different concentrations (10, 30, 50, 70, 100 ppm) in an air tight jar and were stored at 4°C. Litchi fruit samples dipped in sterile water were served as control. 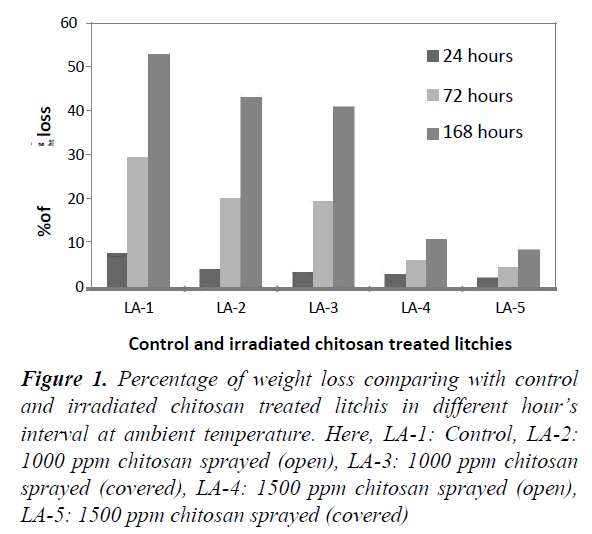 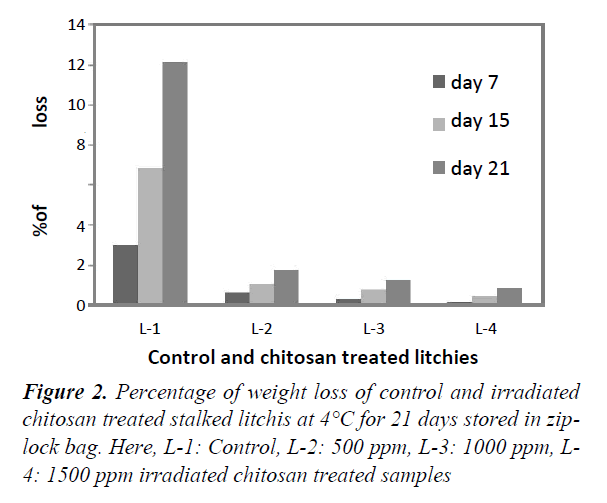 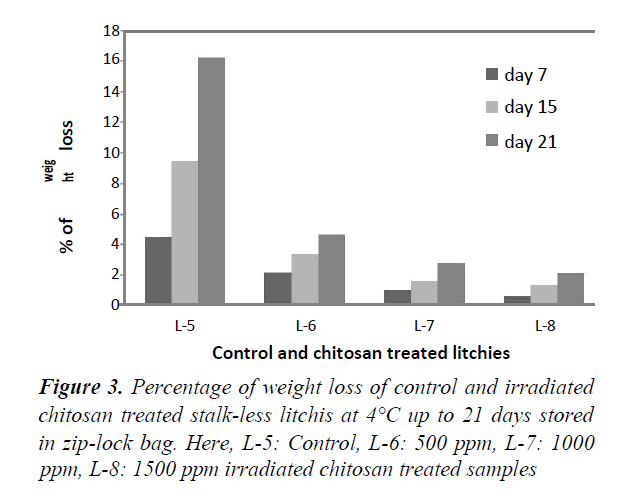 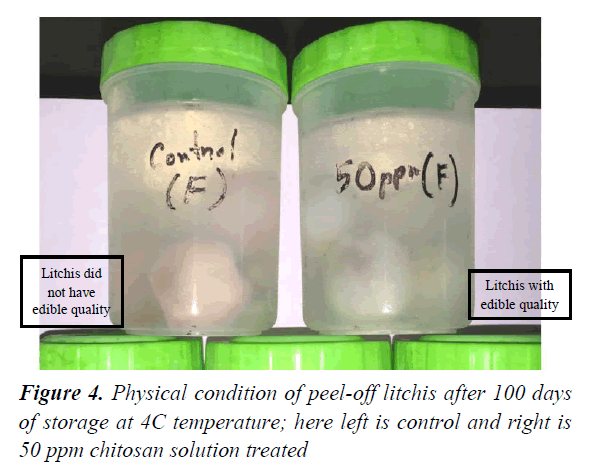 This protection against the weight loss supports the study of Tamer and L Copur who worked with 1% raw chitosan solution in various fruits [32]. Kumari also found similar result while treating litchis with 2% chitosan at 4°C. But Sun found only 2% less weight loss in litchi fruits [4,33]. The study of Ibrahim supports this moisture protection capability that treated pineapples with irradiated chitosan. Lin reported that respiration rate of litchis were reduced by using edible coating generated by 1% chitosan [34,35].

Table 1 depicts decay and microbial attack on control and chitosan treated litchis at ambient temperature after 48, 72 and 168 hours of treatment. It was found that after 168 hours, all control (LA-1) and 500 ppm chitosan treated litchis (LA-2) were dark in color and infected by microbes. On the other hand, only 3 out of 10 litchis were infected by microbes in case of 1500 ppm chitosan treated (LA-5) litchis within the same period of time. It is suggested that coating with irradiated chitosan acted as an antimicrobial agent and thus lowered the infection. Chitosan coating also helped to preserve the fruit's natural color by preventing moisture loss from the peel as well as from oxidation and thus increased shelf life.

Experimental results regarding aesthetic view and microbial attack on control and irradiated chitosan treated stalked and stalk-less litchis at 4°C temperature stored in zip-lock bag is presented in Table 2. Data was taken after 7, 15 and 21 days of interval. It was found that all control (L-1&L-5) and 500 ppm irradiated chitosan treated litchis (L-2&L-6) were infected by microbes after 21 days. But in this period of time only 5 out of 10 litchis and 6 out of 10 litchis were infected by microbes in case of 1500 ppm chitosan treated stalked (L-4) and stalk-less (L-8) litchis respectively. Results suggested that stalk-less litchis were more susceptible to microbial attack than stalked litchis. This was mainly due to the opening on the peel at stalk-less condition. Besides, stalk-less litchis lost moisture more rapidly than the stalked litchis that led to cracking of the peel which might induce microbial infection.

Table 3. Bacterial and fungal count of control and chitosan treated litchis after 3 days of storage in room temperature

The overall study indicates that 1500 ppm chitosan irradiated by 40 kGy radiation is very suitable preservation of litchi fruits both in ambient atmosphere and 4°C temperature. More longevity for consumption can be achieved by covering the litchis and lowering the temperature. we was also found that peel-off litchis can be a great source of off-season litchi source if it can be preserved by 50 ppm 40 kGy irradiated chitosan in air-tight jar at 4°C. Thus it can be concluded that radiation processed chitosan is a very suitable for shelf-life extension of litchis and may find a potent application to reduce post-harvest loss of litchis as well as in the food processing industries.