Microorganisms adhere themselves with different surfaces like indwelling medical devices, equipment’s of different industries like water, food and dairy products etc. Microorganisms after attachment produce EPS, which help them in the development of biofilms. Commonly known pathogens including, bacteria, fungi, viruses, protozoa and pathogenic cyanobacteria, are involved in biofilm formation. Biofilms are involved in many persistent and chronic infections in human and animals, increase resistance to antimicrobials, biofouling of water and spoilage or contamination of food and dairy products etc. Biofilms producing bacteria is a serious threat for public health globally but due to poor sanitary conditions and low economic resources chances of infections is high in developing countries. Effective control measures should be developed for the treatment and prevention of biofilm to get rid of serious problems.

Initially pathogens appeared in human communities, and spread to areas where they are not previously found are called enteric pathogens. These pathogens include: bacteria (E. coli, H. pylori, C. jejuni, M. avium complex), protozoa (C. cayetanensis, Cryptosporidium spp., Toxoplasma gonidii), viruses (noroviruses, Hepatitis E viruses) and pathogenic Cyanobacteria [1]. Approximately 99% of micro-organisms on planet earth live in communities known as biofilms [2]. Biofilm forming organisms are quietly broad in nature containing number of known pathogenic fungi and bacteria [3]. Due to biofilm formation pathogenic bacteria are not only capable of causing infection but they are also capable to survive in diverse environmental condition [4]. Microbial biofilms were first observed by Van Leeuwenhoek, on the surface of tooth [3]. Microbial biofilms were also studied by Characklis in water systems of industry and observed that biofilms are anti-susceptible to disinfectants like chlorine [5].

Microorganisms of multiple groups also constitute same biofilm, in which interstitial spaces and water channels are present for the transport of oxygen and nutrients, which help in the development of cells present in biofilm [6]. Recently, evidence shows that biofilms contain virulence factors, which help resident bacteria to attain virulence characters that are not present in single bacteria [7].

A biofilm constitute of many microbial cells associated with surface, present in an Extracellular Polymeric Substance (EPS) matrix. Biofilms are present on different surfaces, like biological tissues, medical equipments, pipes of water systems etc. [3]. Formation of biofilms depends on the type of microorganisms and material [6]. Biofilms have a tendency to trap particles, including various minerals and components of host system such as, RBCs, fibrin and platelets.

Biofilm-containing organisms develop slowly as compared to planktonic organisms [8]. Important characteristics of biofilm are; aggregation of biofilm with cells, exchange of resistance plasmids between cells, production of endo-toxins, resistance to antimicrobials and host defense system clearance [9,10]. Kind of substrate, cell surface hydrophobicity which help them in attachment with pilli, flagella, glycocalyx and fimbriae are also an important characteristics of biofilm [3,11].

In developing countries a disturbing feature of biofilm-based infections is higher resistance to antibiotics [12]. However, they also cause industrial pipe fouling, plant infections and nosochomial infections, causing great economic problems in industry and medicines [9,13-15]. There are many improved stratergies for biofilm control but due to collapse of current techniques new procedures are urgently required [16].

Role of biofilm in public health

Water is an important component of life. Adequate and secure water must be accessible to all, which result in many health benefits [19]. Microbial contamination results in many health related problems [20]. Many serious health issues are facing in developing countries related to safe drinking water, like diarrhea and death specially in infants. Primarily in Asian and African countries [21]. According to WHO, death rate due to water born infections exceeds 5 million people per year, in which more than 50% are intestinal infections? Cholera ranks first in people of low economic resources and poor hygienic conditions [19,21,22]. This issue is also sensitive in pregnant women, young children’s and elder persons [23].

Bacteria, including foodborne pathogens grow as biofilms in their normal habitats [29,30], leading to severe hygienic problems and economic loss due to spoilage of food. The growth of microbes on solid surfaces is a universal fact [31], which is an important factor of food-borne infections and biofilm development when not properly sterilized [32]. The ability of bacteria to adhere with surfaces is more implicated in many industries [33] especially pharmaceutical and food [34], in which L. monocytogenes is a common one [35]. Safety of food is an important public health issue that connects human wellbeing to different areas of food manufacturing like farming etc. [36].

People in many countries use ready-to-eat (RTE) and raw food, including products of seafood [36]. Second most common food borne pathogen in RTE was E. cloacae [29,35]. Similarly the most common pathogen in poultry farm is S. enteritidis which cause food poisoning in human worldwide. Biofilm is produced by almost 50% of them [37].

Foodborne infections due to consumption of seafood are a major cause of the worldwide hospitalizations and morbidity [38,39] because nutritional value of seafood is high, containing proteins, omega-3 fatty acids, micronutrients, minerals and vitamins [40,41]. Seafood includes species of marine mammals, mollusks, finfish, fish eggs and crustaceans [35]. Pathogens forming biofilm are generally resides in certain types of seafood, such as crabs [42], pacific oysters [43] and shrimp [44] etc. Seafood-related infections are caused by numerous viruses, bacteria, and parasites [35], forming biofilms on food contact surfaces, seafood, and in water [45] where they remain attached for long time [46] and show resistance to many antimicrobials [47,48]. When these biofilms are stirred by food-related and environmental factors, they come again to their planktonic state [49].

Common pathogens cause contamination in fish and seafood are A. hydrophila is most widely known specie [50,51] and an etiological agent of antibiotic and virulence resistance [52]. V. cholera is also an important source of seafood contamination i.e. diarrhea [53], during handling, manufacturing and processing [54,55]. Cholera has been known as the main cause of diarrhea in South East Asia [56-58] Haiti [59], Africa [60] and other developing countries [61]. In 1992, outbreak of V. cholera O139 was first reported in India and Bangladesh [62].

Salmonella spp. cause infections in poultry, seafood, dairy products, pork and beef [63,64], also at high salt and temperature [64-67], therefore it is a major challenge worldwide [67]. L. monocytogenes is an important pathogen, and was present in freshwater fish, crabs and catfish [68,69]. After contamination in food, this pathogen can also multiply at refrigeration temperatures [70].

Threats of biofilms in dairy industry

Due to change in situation of global marketplace, the dairy industry becomes of the major industry of the world in which perishable (e.g. yogurt, butter and cheese) and semi perishable (casein, milk powder) products are manufactured. Inadequate cleaning and sanitization help pathogens to make biofilm in milk processing units [47,71], causing both public health and economic loss. Instead of sanitation and cleaning process, it has been noticed that microorganisms can remain stay on the surface of equipment [72]. Biofilms are not only a way of contamination, but it can also reduce transfer of heat, increase rate of corrosion and resistance to friction of fluid [73]. Bacterial growth in dairy products can badly affect their functionality, quality and safety [74]. In dairy industries the most commonly occuring bacteria belong to the genus Enterobacter, Micrococcu, Listeria, Streptococcus, Bacillus and Pseudomonas [75-77].

Because of neutral pH and nutritive nature, milk is the most excellent medium for the reproduction of microorganisms [74]. Species like Pseudomonas, Legionella and Aeromonas originating from rinsing water also cause contaminations in dairy products. Other sources of contamination are formation of biofilms in milk pipelines, milk silos and storage tanks [78].

Biofilms are responsible for a large number of microbial diseases in both animals and humans [82].

Biofilm is also associated with many animal diseases. So role of biofilm should be carefully studied in the field of zoology. Important topics like food safety, animal welfare and health, animal disease control are extremely dependent on the ability to control bacterial quorum sensing and biofilm [83].

Several protozoa, bacterial and fungal biofilms are related to 60% urinary tract infections [87,88]. H. pylori is the most common cause of infections in humans after S. mutans [89], causes diseases in 20% of infected persons [90]. If UTI are not properly treated then other complications may also be develop such as bacteremia, acute pyelonephritis, bacterial prostatitis and vaginosis, renal infections, bladder cancer and sometime death [6,10,91].

Opportunistic organisms are causative agent of diseases that ranges from simple allergy to systemic infections affecting worldwide population [92]. Biofilms may be of a single or multiple species, depending on the conditions. Biofilms of Urinary catheter biofilm may be initially composed of single spp., but with the passage of time it may be of multi-specie Common bacteria isolated from indwelling medical devices are E. faecalis, S. aureus, S. epidermidis, S. viridans, E. coli, K. pneumoniae, P. mirabilis, and P. aeruginosa [93]. Among these S. epidermidis and S. aureus are commonly present on cardiovascular devices [94], causing about 40%-50% of infections related to heart valve and 50%-70% of infections related to catheter (Figure 1) [95]. 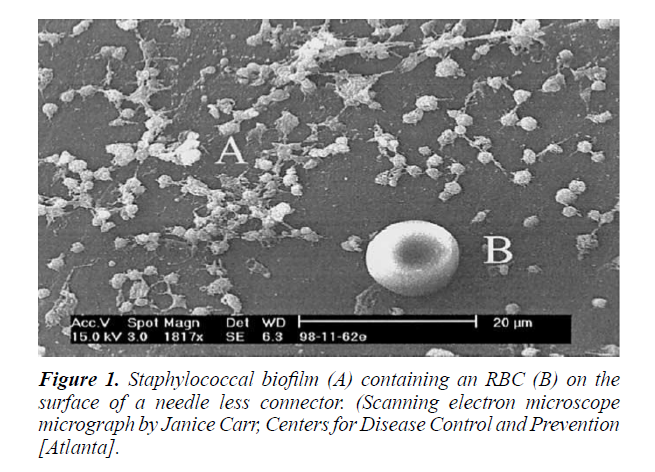 Figure 1: Staphylococcal biofilm (A) containing an RBC (B) on the surface of a needle less connector. (Scanning electron microscope micrograph by Janice Carr, Centers for Disease Control and Prevention [Atlanta].

The innovation of penicillin is considered as a golden age in the field of medicines is because it focused on a new era in the prevention and treatment of lethal diseases [96]. With the passage of time new antibiotics were also discovered like chloramphenicol, streptomycin and tetracycline. These antibiotics were first used during World War II [97]. However, with the passage of time and increasing use of antimicrobials, more bacteria developed resistance against them [98].

Bacteria associated with biofilm are more resistant to antimicrobials, because the complex structure of biofilm with EPS matrix prevents the access of antibiotics to bacteria. Due to change in environmental conditions bacteria in biofilm grow slowly or would be deprived from nutrition and gathering of waste. These changed state could make bacteria more antisuseptible to antibiotics, which results chronic and persistent infections [36,99]. Methicillin resistance in S. epidermidis and S. aureus (MRSA) is one of the main problem in medical field [100-102].

The mechanism of resistance in biofilm remain not completely understood [103], but for the prevention of biofilm an enzyme (e.g. alginate lyase and DNase) and quorum-sensing inhibitors related techniques are used, which help in the dissolvation of EPS matrix that increase antibiotic resistance towards biofilm [104].

Biofilm is a serious threat in public health in developing countries, because it is an example of defense mechanism in numerous bacteria. Biofilm are made by different species in their own unique way. Biofilms in drinking water, food/dairy industries are associated with many microbial pathogens, which affect the quality and quantity of food products and biofouling of water. The supply of contaminated water and food may be a threat to human and animal health. In developing countries, provision of safe and clean water/food is a major global subject, which increases the rate of infections in these countries. Growth of biofilms depends on many biotic and abiotic factors. If we control these factors through different techniques, growth of microbial biofilm can be stopped up to certain limit, which reduces the chance of infections.

Further research on biofilm related public health issue is needed to prevent and control infections related to drinking water industries, food industries and dairy industries. Research on this aspect should be proceed on many areas including, removal of genes expressed by organisms associated with biofilm, assessment of different control mechanisms for remediation of biofilms that colonize on medical devices and decrease antimicrobial resistance etc. 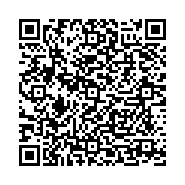