Bacteriophages are natural gift, could we pay further attention!

Bacteriophages, which occasionally termed phages, are known as "bacteria eaters" or “bacteria viruses” that infect and kill bacterial cells demonstrating specific infection based on the species of bacteria. These tiny microorganisms are abundant in nature and they do not infect human cells or any cell lines from other organisms. Bacteriophages have been documented as a potential substitute to antibiotics in animal health, as biopreservatives in foods and as tools for detecting pathogenic bacteria. In recent years there is a great interest for using them in food industry and medical therapies as potential biocontrol means and to treat bacterial diseases respectively. This article briefly summarizes the history and properties of the bacteriophages and highlights their potential advanced applications.

Bacteriophages, which occasionally termed phages, are known as "bacteria eaters" or “bacteria viruses” that infect and kill bacterial cells demonstrating specific infection based on the species of bacteria. These tiny microorganisms are abundant in nature and they do not infect human cells or any cell lines from other organisms. Bacteriophages have been documented as a potential substitute to antibiotics in animal health, as bio-preservatives in foods and as tools for detecting pathogenic bacteria. In recent years there is a great interest for using them in food industry and medical therapies as potential biocontrol means and to treat bacterial diseases respectively. This article briefly summarizes the history and properties of the bacteriophages and highlights their potential advanced applications.

The bacteriophage was first discovered in 1896 when Ernest Hanbury Hankin published his discovery about the presence of a biological substance in waters from Indian rivers and this substance showed the ability to kill the bacterium Vibrio cholerae in addition to its ability to pass through Millipore filters [1]. Later in 1915, the microbiologist Frederick Twort published his statement about the presence of transparent material within the filtrate of pure bacterial culture which showed break down the bacterial cultures of micrococci isolated from vaccinia [2]. Twort stated that this transparent material not capable to propagate in the absence of bacteria thus he defined it as bacterial secretion at that time. Two years later Félix d’Herelle stated a finding similar to Twort’s when isolated an active filtrate from the stools of shigellosis patients was able to destroy the cultures of Shiga bacilli and he concluded this active filtrate as living particles or viruses when replicating in their host cells [3]. d’Herelle confirmed his finding by applying this anti-Shiga microbe to experimental animals for competing shigellosis. The term "phage" was then used to describe this substance refer to the Greek word, which means to eat or to consume, Therefore, a bacteriophage is a bacteria eater. The exact nature of phage could not be determined according to the lack information about the genetic materials in the early 20th century. Bordet and Gartia presented challenging statements about the phage and its discovery [4,5].

In 1938 John Northrop stated that bacteriophages were created by living host by the generation of an inert protein which is changed to the active phage by an auto-catalytic reaction [6].

The invention of the Electron Microscope (EM) aided Helmut Ruska to first visualize and define the shape of a phage then he described it as round particles in addition to “sperm-shaped” [7]. Ruska continued his research in his thesis work on the nature and biology of bacteriophages [8]. Other researchers, Luria and Anderson identified diverse types of phages and described their common structure: a non-homogeneous round head with a much thinner tail, giving a kind of sperm-like appearance [9,10].

Phages were first used successfully to treat bacterial infections a decade before penicillin was discovered [11] however the shortage of understanding of basic phage biology and the developing of newly antibiotics subsequently delay this appreciated therapy.

The classic main structure for the phage is constituted of the head and tail (Figure 1). The head (or capsid) is a protein shell in an icosahedron shape which contains the phage DNA as double-strand (ds) DNA. The tail has generally six tail fibres holding receptors to recognise the attachment sites on the bacterial cell surface. Advanced studies on bacteriophages showed the presence of different morphological types and some of them have other attachment mechanisms do not rely on tails or tail fibres. Furthermore, there are two types of bacteriophage life cycle: virulent or temperate [12]. 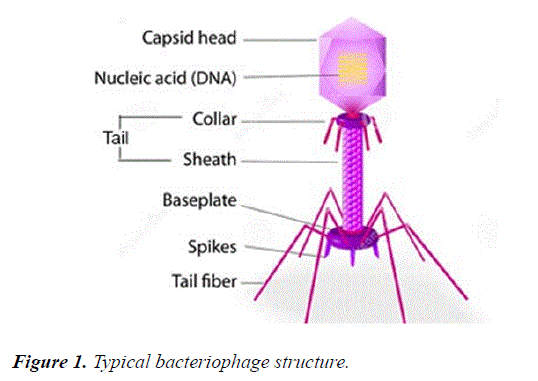 The virulent phages cause quick lysis and death of the infected bacterial cell, while temperate phages occupy portion of their life cycle in an inactive state called prophage. The mechanisms to be used by phages to inject their genome into the bacterial cell differ according to the morphology and nature of each phage. Then the phage genome is transcribed by host cell RNA polymerase and redirecting the metabolic processes of the bacterium to produce new phages. In the late stage of the reproductive cycle they produce an enzyme called “lysin” that degrades the cell wall of the infected bacteria to release the progeny phage [13].

Bacteriophages are considered as a severe risk in the dairy industry which threat the dairy bacterial starter causing failure in the production of cheese and fermented products [14]. However, they became well known for their several potential applications in food industry and they have been approved recently as food additives.

Since they are harmless to the human and animal cells, easy handling, in addition to their specificity to bacterial species thus make them unique candidates in food chain. Bacteriophages proposed applications include their use as substitutes to antibiotics in animal health for competing pathogens, as natural bio-preservatives in food, as disinfection for the contact surface and equipment and as tools in identification, characterization, classification and detection of pathogenic bacteria. Their possible bio control against the foodborne pathogens; Salmonella, Campylobacter, virulence, Enterococcus has been documented [15-18].

Although the discovery of antibiotics hold back the use of phage in the medical purposes but nowadays, several claims have been raised worldwide to go back and give attention to the phage therapy to avoid the widespread occurrence of multidrug-resistant pathogenic bacteria strains [19] as a result from the massive use of antibiotics.

Moreover, the antibiotic resistance problem accompanied an advanced progress of bacteriophage biology and molecular biology which arose a fresh look to the phages as promising powerful therapeutic agents. Phage therapy involves using phages or their products [20-22] as bio agents for the treatment or prophylaxis of bacterial infectious diseases. The advantage of phage therapy depends on the ability of the bacteriophage as natural antibacterial to regulate bacterial populations by induce lysis to the bacterial cells in the site of infection with specific action to one single species or in some cases a single strain within a species.

This specificity keeps the entire microbiome of the patient which is altered negatively by the antibiotics. Advanced strategies such as bioengineered phages and purified phage lytic proteins have been suggested for potential new phage therapy.

The future of bacteriophage research is blooming for both basic and applied science concerning the human health plus food industry and even more, could we pay attention for this powerful gift!