Foodborne illnesses are one of the major problems associated with contaminated foods due to their processing. Dodo-Ikire is indigenous to Ikire in Osun state and is a ready-to-eat plantainbased snack prepared, packaged and sold in different areas including Ile-Ife. This study evaluated the bacterial content of twenty samples of Dodo-Ikire sold randomly around Ile-Ife. Plate count with Nutrient Agar (NA) and culture methods using Shigella-Salmonella Agar (SSA) was used for evaluation. Also, an antibiotics sensitivity test was carried out on the identified isolates. The antibiotics used includes; Ciprofloxacin (5 μg), Ceftazidime (30 μg), Nitrofurantoin (300 μg), Augmentin (30 μg), Ofloxacin (5 μg), Cefixime (5 μg), Gentamicin (10 μg), Cefuroxime (30 μg). Sixteen bacterial isolates were obtained from the samples. Plate count revealed that the bacterial load of the samples ranged from 2.60x107 cfu/ml to 9.00x109 cfu/ml. According to the results of the biochemical test, four genera of bacteria were identified: Shigella sp. (82%), Klebsiella sp. (6%), Salmonella sp. (6%), and Escherichia coli (6%) with Shigella sp. having the highest incidence. The most effective antibiotics were Gentamicin and Cefixime, which were effective against all the bacterial isolates. The least effective was Ceftazidime as all bacterial isolates were resistant to it. This study shows that Dodo-Ikire sold in Ife and its environment is contaminated with one or more bacteria because of the unhygienic practices surrounding its processing, storage, and packaging which can pose health risks to the consumers. This study recommends maintenance of the standard hygienic procedure for the preparation, package and handling of foods

Shigella sp. are a Gram-negative, rod-shaped, immotile, and non-spore–forming bacteria and a causative agent of acute diarrhoea that may progress to bloody mucoid diarrhoea, also known as bacillary dysentery (or shigellosis) [1]. Shigella is the most common cause of diarrheal disease and has remained a major pathogen responsible for increased rates of morbidity and mortality caused by dysentery each year around the globe, particularly affecting children aged <5 years in developing countries. The Shigella sp. comprise of subgroup A (S. dysenteriae), subgroup B (S. flexneri), subgroup C (S. boydii), and subgroup D (S. sonnei). Each subgroup contains several serotypes [2].

Shigellosis can occur in pandemic, epidemic, and sporadic forms. Epidemiological reports have shown that the epidemic subgroup of diarrhoea typically occurs as a result of infection with S. flexneri in developing countries and S. sonnei in industrialized countries [3]. Shigella sp. is categorized by the World Health Organization (WHO) as bacteria mainly causing infections in the community. Shigellosis is a great public health threat, because its infective dose is on the order of 10-100 organisms compared to other enteric pathogens(usually it is 105–108 for Salmonella and Vibrio, respectively) [4].

Plantain (Musa sapientum var Paradisiacal Linn) is one of the most important staple food crops serving as meal in all kind of variety and recipes for millions of people both in the developed and developing countries [5]. The cultivation of the crop is appealing to many farmers as it has a low labour requirement for production compared with cassava, maize, rice and yam [6].

Plantain thus contributes significantly to food and income security engaged in its production and trade, particularly in the developing world. Nigeria is the largest producer and consumer of plantain, producing over 10.5 million tons annually, which accounts for approximately 10% of total global production [7]. This invariably makes Nigeria one of the largest consumers of the crop, which in Africa provide more than 25% of the carbohydrates and 10% of the daily calorie intake for more than 70 million people [8].

There are a large variety of ways in which plantain is consumed in Africa; these include eating raw, frying, boiling, porridge, conversion to flour and whole lot of other methods which differ by location and tradition. There several ways of frying plantain, one of such include using over-ripe plantain in the making of “dodo-Ikire” -a popular, age-long snack which originated from Ikire town of Osun state in the south western part of Nigeria.

Dodo Ikire originated from “waste not, want not” culture aimed at redeeming the spoilage of plantain by turning it into food. The snack is prepared by frying over-ripe plantain mixed with a few fairly ripe ones in excess palm oil. After frying, the oil from the lumpy mix is then drained by pressing a few spoonfuls through a funnel which results in the usual conical shape of the Dodo Ikire.

Consumption of ready-to-eat snacks is gaining ground across the world and Nigeria is not left out, as consumers daily realize the impact of snacks, especially in most big cities [9]. This is largely believed to be driven by convenience-driven lifestyles, job demands and dietary habits [10]. There are wide varieties of ready-to-eat snacks in Nigeria including those of local origins, like the popular “dodo Ikire. The snack is being wrapped and displayed in low density nylon or open plastic/ metal containers, with little or no attention to loss of sensory attributes and microbiological quality [11].

This work was designed to evaluate the isolate and characterize Shigella sp. in dodo Ikire samples. Also, to determine the antimicrobial susceptibility profile of the isolated strains and to provide information on the safety or otherwise of Dodo- Ikire as a snack consumption.

Samples were randomly collected by buying Dodo-Ikire as packaged at Fajuyi Hall, Ibadan Road, OAU Market, OUI Gate and Toll Gate, Modomo and transported to the laboratory for immediate analysis.

The samples were weighed and 5 g from each source was cut out and weighed aseptically. The 5 g of each of the samples was then soaked in 45 ml peptone water contained in conical flasks. These were then incubated for 24 hours at 37°C. Serial dilution was carried out by taking 0.1 ml from the conical flask mixture and dispensing into a test tube containing 9 ml sterile distilled water.

Preliminary identification was done via observation on the differential media, morphological characterization and physical properties.

The method used was the Bauer standardized disk agar diffusion method and Hinton agar was used as the plating medium due to its low tetracycline content and sulfonamide inhibitors.

A total of sixteen bacterial isolates were used for this study. the bacterial load and colony characteristics of the samples were observed macroscopically on nutrient agar and the microscopic analysis of the isolate through gram staining, it was observed that all the isolates were gram negative and rod shaped. Biochemical tests were performed on the sixteen unknown isolates and the presumptive identity of the isolates was recorded. from the biochemical tests, four genera of bacteria were identified which are: shigella sp. (82%), klebsiella sp. (6%), salmonella sp. (6%) and Escherichia coli (6%) with percentage prevalence respectively shown in Figure 1, represented on a pie chart while the analysis of sntibiotic susceptibility pattern from sampling sites is presented in Figure 2. Table 1 shows antibiotic susceptibility pattern from sampling sites while Table 2 shows analysis of the antibiotic susceptibility pattern from sample sites. 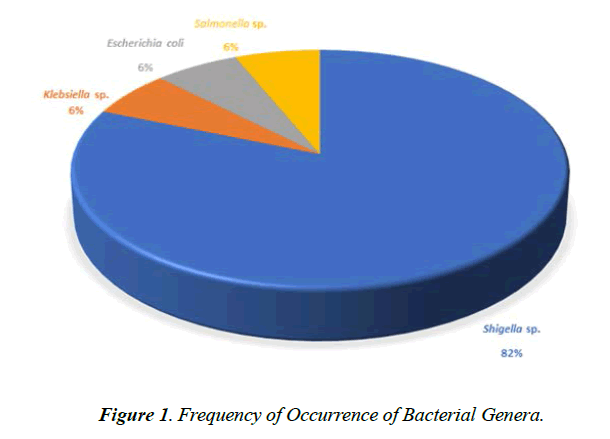 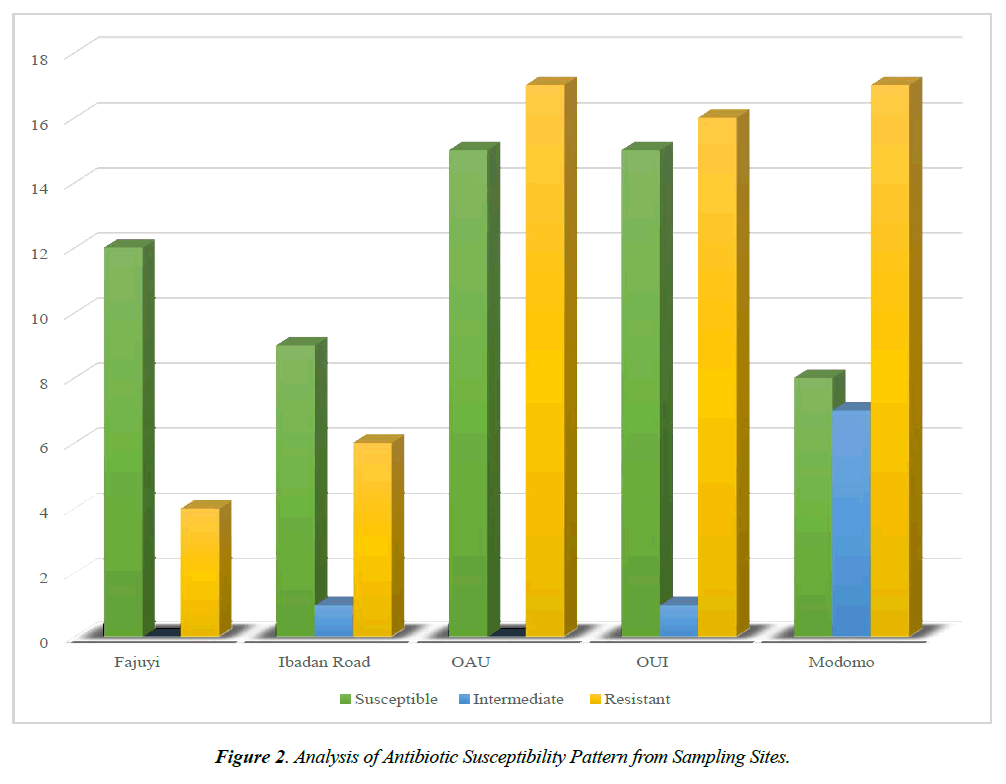 Pathogenic bacteria are the most common known causes of food contamination and food borne illness. In this study, the total viable count ranges from 2.6×107-9.0×109 CFU/ml. The International Commission for Microbiological Specification for Foods (ICMSF, 1996) states that ready-to-eat foods with plate count between 0-103 is acceptable, between 104 -≤ 105 is tolerable and 106 and above is unacceptable. Hence, the Dodo- Ikire provided in Ile-Ife campus to students is of unacceptable microbiological quality.

The varieties of bacteria obtained from Dodo-Ikire in this study may attribute to several factors which include the primary contamination of the raw materials to the handling of the finished products. The utensils used in the preparation of Dodo- Ikire and sanitary condition of the processing environment especially air and dust-in-air may have contributed to increase in the level of contaminants.

The large number of Shigella sp. found in the Dodo-Ikire may have resulted in poor hygiene and handling of the plantain used in the production, as most producers prefer to use spoilt over-ripe plantain because it’s cheaper. Also some of the Shigella sp. may have survived the frying process and the Dodo-Ikire are furthermore infected by poor and unhygienic packaging and handling by the vendor. These vendors are mostly women who may have cleaned up their babies’feces, without properly washing their hands, thereby increasing the Shigella sp. in the Dodo-Ikire. Contact with other fecal matter from people, animals or carcasses can also increase the yield of Shigella.

Consumption of Shigella sp. infected food can lead to diarrhoea and shigellosis. Although severe infection resulting in shigellosis can cause seizures, bloodstream infection and arthritis, death rarely occurs (San Francisco Department of Public Health). Salmonella sp. found in this study may also have resulted from poor hygiene and handling of the Dodo-Ikire during packaging and not from the plantain used for the production, this is because very few Salmonella sp. can survive the frying process [12]. This explains why the percentage of Salmonella sp. found in this study is very low. Escherichia coli found in this study may have also resulted from contact with faecal matter or other contaminated food items packaged together with the Dodo-Ikire. Bacterial cross-contamination is important to note when handling ready-to-eat food.

Klebsiella sp. are routinely found in the human nose, mouth and gastrointestinal tract as normal flora, but can behave as opportunistic human pathogens leading to a wide range of disease states such as pneumonia, urinary tract infections, septicemia, meningitis and diarrhoea [13].

The presence of these species in areas where they can be easily transmitted out, especially in the nose and mouth, may have contributed to their prevalence in the Dodo-Ikire samples in this study. Improper handling and lack of good hygiene by the vendors and handlers may have contributed to this. For the antibiotic susceptibility pattern, it is important to note that antibiotic resistance has been a major problem to the use of antibiotics. Many of the highly resistant bacteria are those that are easily transmissible and often members of the normal flora, because these are usually being exposed to inappropriate doses of antibiotics either through self-medication by individual during a brief illness or incompletion of dosage prescribed by health professionals.

From this study it has been concluded that most Dodo-Ikire sold in Ife and environs is contaminated with one or more Bacteria, especially Shigella sp., because of the unhygienic practices surrounding its processing, storage and packaging which can pose health risk to the consumers. However, if preventive measures are not taken, outbreak of foodborne disease is imminent.

Dodo-Ikire should be processed, stored and distributed under strict hygienic measures to avoid contamination. Regulatory bodies such as NAFDAC should be put in place and unannounced periodical inspection must be done by regulators to see to the poor hygienic practices of food handlers and to apply sanctions where necessary. Relevant agencies in public health and food safety should organize training and teaching on food safety and hygiene for food vendors especially compliance of Hazard Analysis and Critical Control Points Principles (HACCP) during preparation, packaging and serving of this food to consumers. All the equipment used should be well taken care of in terms of proper washing and sterilization to prevent the entries of pathogens before been kept after usage.