Department of Biology, College of Science, University of Babylon, Iraq

Microbial pathogens in food may cause spoilage and contribute to the foodborne disease incidence, and the emergence of multidrug resistant and disinfectant resistant bacteria such as Staphylococcus aureus (S. aureus), Escherichia coli (E. coli), and Pseudomonas aeruginosa (P. aeruginosa) has increased rapidly, causing the increase of morbidity and mortality [1].

Morbidity and mortality are mainly caused by infectious diseases all over the world. The World Health Organization reported that 55 million people died worldwide in 2011, with one-third of the deaths owing to infectious diseases [2]. Antibiotic resistant microorganisms can increase mortalityrates because they can survive and recover through their ability to acquire and transmit resistance after exposure to antibiotic drugs, which are one of the therapies to infectious diseases [3]. Antibiotic resistant bacteria threaten the antibiotic effectiveness and limit the therapeutic options, even for common infections [4].

Organic acids are increasingly used in food safety as preservatives [5] and generally recognized as safe substances (GRAS) by the FDA and are approved as food additives by European Commission, FAO/WHO and FDA [6]. The antibacterial effect of organic acids on different types of pathogenic bacteria tartaric, citric, lactic, malic, propionic, and acetic acids [5]. Acetic acid has been investigated as an antimicrobial agent for use in meat, including poultry, beef and pork to extend its shelf-life and decontamination of bacteria, such as Salmonella or Escherichia coli [7]. The objects of the study, antibacterial effects of acetic acid against different types of bacteria cause food spoilage.

A total of 120 samples were collected, including 40 raw milk, 40 cheeses, and 40 yoghurt was collected randomly from Babylon province. All samples kept in the icebox at 4 °C and were transported to the laboratory Vet. Public Health for analyzes.

Isolation and identification of bacteria

Ten milliliters of samples were taken with 90 ml of normal saline and homogenized to make an initial dilution (10-1). Serial dilutions up to 10-6 were made for each sample, then (1 ml) from each corresponding dilution (10-5 and 10-6) were inoculated into various selective media such as nutrient agar, mannitol salt, Eiosin methylene blue (EMB) blood and MacConkeys agar then incubated at 37°C for 24 hours [8]. Isolates were identified to the species level based on the standards biochemical and microbiological methods [9].

The antimicrobial drugs used were Amoxicillin (10 μg), Gentamicin (10 μg), Erythromycin (25 mg) Ciprofloxacin (5 μg), Amikacin (30 μg) and Oxacillin (30 μg). The antimicrobial susceptibility testing was done by the agar disc diffusion method as described by the Clinical and Laboratory Standards Institute [11]. In brief, a 0.5 Mac-Farland standardized suspension of the bacteria was prepared in 0.85% sterile normal saline solution. A sterile cotton swab was dipped into the standardized suspension of bacteria and then uniformly streaked over the entire surface of the Mueller-Hinton agar. Then, the paper discs impregnated with a fixed concentration of antibiotics were placed on the agar surface and incubated in an inverted position at 37°C for 24 hours. after incubation for 24 hours, clear zones of inhibition were produced by the bacterial growth and diffusion of the antibiotics and these were measured in millimeter using a caliper and interpreted as susceptible, intermediate and resistant [11].

Minimum inhibitory concentration was determined using different concentrations (0.5%, 1%, 1.5%, 2% and 2.5%) of the acetic acid. Sterile cork borer of 8.0 mm diameter was used to bore well in the pre-solidified Mueller Hinton agar (MHA) plates and 100 μl volume of each dilution was added aseptically into the wells made in MHA plates in triplicate that had food- associated bacteria. 100 μl distilled water introduced into the well in place of acetic acid was used as a control. All the test plates were incubated at 37°C and were observed for the growth after 24 hrs [10]. The zones of inhibition were measured in diameter according to Lingham T et al. [5]. 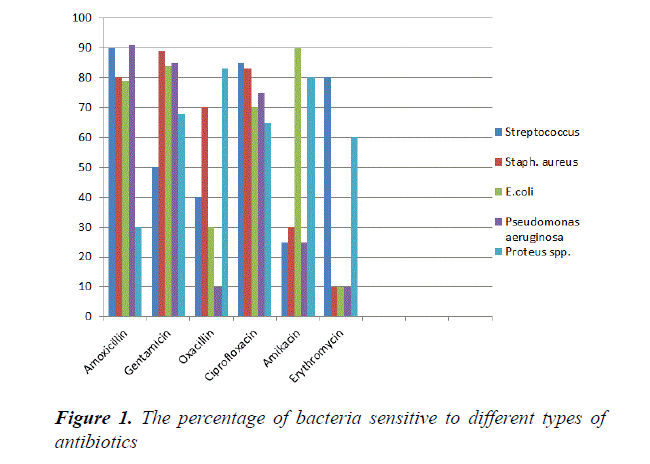 Figure 1: The percentage of bacteria sensitive to different types of antibiotics

This study indicates that the acetic acid antimicrobial agent can reduce the pathogenic bacteria and increase the shelf life of food products.

I would like to thank all the faculties who participated in the study.