Objective: As the second common malignant tumor in females, cervical cancer severely affects public health. Epithelial-Mesenchymal Transition (EMT) occurs in tumor cells and is a key factor for tumor infiltration and metastasis. MicroRNA (miRNA) can inhibit mRNA translation and thus may be associated with tumor EMT. This study treated cervical cancer Hela cell line with neo-gambogic acid, to investigate its regulation on mRNA, aiming to elucidate its effects on EMT occurrence and drug resistance.

Materials and Methods: Human cervical carcinoma Hela cells were transfected with miRNA106b and miRNA93 vectors, and treated with different concentrations of neo-gambogic acid (0.5 μg/ml, 1.0 μg/ml, 1.5 μg/ml and 2.0 μg/ml) for different time points (24 h, 48 h and 72 h), followed by cisplatin treatment. Real-time PCR was used to detect the expression of miRNA. Cell invasion and migration were detected by Transwell assay, while Western blot was used to quantify the EMT-related protein expression.

Cervical cancer is one of the most common malignant tumors in females. About 500,000 women were diagnosed with cervical cancer each year worldwide, only fewer than breast cancer. In China, there were over 135,000 newly-diagnosed cervical cancer patients each year, ranked as the second major cancer causing mortality in Chinese women [1]. Epithelial- Mesenchymal Transition (EMT) is a feature of tumor stem cells. Recent study has shown the close association with EMT formation as well as the occurrence and development of epithelial-derived malignant tumors [2]. The occurrence of EMT is mainly due to the loss of epithelial cell polarity, thus acquiring partial features of mesenchymal cells, leading to cell invasion and migration. Both in vivo and in vitro studies have found the widespread existence of EMT in pulmonary carcinoma, breast cancer and prostate cancer [3]. Gamboge is secreted from Garcinia maingayii and has multiple effects including anti-toxicity and haemorrhage prevention. Recent study has shown the inhibitory role of gamboge on tumor cell growth, suggesting it might be a potential approach for treating breast cancer, lymphoma and skin cancer [4,5]. Basic study has indicated the major effective component of gamboge during anti-tumor effects as gambogic acid, neo-gambogic acid and iso-gambogic acid, all of which had wide spectrum of antitumor and potent activity [6]. This study selected cervical cancer Hela cell, on which neo-gambogic acid was applied to test its regulatory effects on mRNA expressions, in an attempt to analyze its effect on EMT in cervical cancer, as well as on the drug resistance.

Human cervical carcinoma Hela cells were cultured in RPMI1640 medium in a humidified chamber with 5% CO2 at 37°C.

Recombinant pC1R1-miRNA106 expression vector was digested by EcoRI enzyme, and was extracted for target gene and linearized vector fragments for de-phosphorylation to prevent auto-circulation. Cells at log-phase were seeded into 6- well plate and divided into pcDNA3.1-miRNA106b transfection group and pcDNA3.1-miRNA93 group. MiRNA106 and miRNA93 vectors were transfected into cervical cancer Hela cells following the manual instruction of Lipofectamine 2000 kit.

Hela cells at log-phase were counted and seeded into culture plate for attachment growth overnight. DMEM medium containing 2% Foetal Bovine Serum (FBS) was used for 24 hincubation, and replaced by DMEM containing 10% (FBS). Neo-gambogic acid at 0.5 μg/ml, 1.0 μg/ml, 1.5 μg/ml and 2.0 μg/ml were added into DMEM and incubated for different time periods (24 h, 48 h and 72 h), in parallel with the control group, in which Hela cells were not treated.

Both experimental and control cells were treated with 20 μmol/ml cisplatin in a humidified chamber with 5% CO2 at 37°C.

Hela cells at log-phase after transfection were collected and total RNA was extracted by Trizol kit following manual instruction. Total RNA concentration was determined by D260nm/D280nm.

200 ng total RNA was used to synthesize cDNA based on polyA tails. Using cDNA as the template, PCR amplification was performed using primers (Table 1) under the following conditions: 95°C denature for 30 s, followed by 40 cycles composed of 95°C denature for 5 s, 60°C annealing for 30 s.

Cell invasion assay: Matrigel was used to pre-coat Transwell chamber at 4°C overnight. Serum-free culture medium was used to hydrate the basal membrane, which was then incubated at 37°C for 1 h. After transfection, Hela cells were inoculated into the upper chamber of Transwell, while the bottom chamber was filled with RPMI1640 culture medium. The chamber was stained by Giemsa dye, observed and counted under an inverted microscope.

Cell migration assay: Using the same procedures as the invasion assay, cells were seeded into the chamber without artificially basal membrane.

Protein was extracted from Hela cells after transfection followed by detection of the concentration by a BCA assay kit. Proteins (40 μg per well) were separated in 8% SDS-PAGE and transferred to membrane, which was blocked under room temperature for 1 h. Mouse anti-human vimentin, N-cadherin and E-cadherin polyclonal antibody were diluted by 1:1200. Mouse anti-human SNAIL monoclonal antibody was diluted by 1:700 and incubated at 4°C overnight. Secondary antibody was then added for 1 h incubation, followed by development.

SPSS17.0 software was used for statistical analysis. Data were presented as mean ± standard deviation (SD). At least three independent experiments were performed for each assay in this study. Two-way analysis of variance (ANOVA) with Bonferroni post-test was performed for comparison of the significance among multiple treatment groups at different time points. A statistical significance was defined when p<0.05.

Expression of miRNA106b and miRNA93 in Hela cells

To evaluate whether neo-gambogic acid affects the expression profile of miRNA106b and miRNA93 in Hela cells, real-time PCR were performed. Results showed that with higher concentration and/or elongated treatment time of neogambogic acid, the expressions of both miRNAs were significantly decreased (p<0.05).

At all concentration sub-groups, the expressions of these two miRNAs in experimental group were significantly lower than those in the control group (p<0.05) (Table 2).

As reduced cell invasion and migration were observed in Hela cells after neo-gambogic treatment, suggesting this reagent might affect EMT. To investigate that, we measured the protein expression levels of E-cadherin, N-cadherin, Snail and Vimentin by western blot.

Results showed that with higher concentration and/or elongated treatment time of neo-gambogic acid, the expression levels of N-cadherin, Snail and Vimentin were all decreased while E-cadherin protein expression was elevated (p<0.05).

At all concentration sub-groups of experimental group, there was a significant difference compared with control group (p<0.05, Table 3 and Figure 2).

Table 3. Expression of EMT-related proteins in Hela cells after transfection. 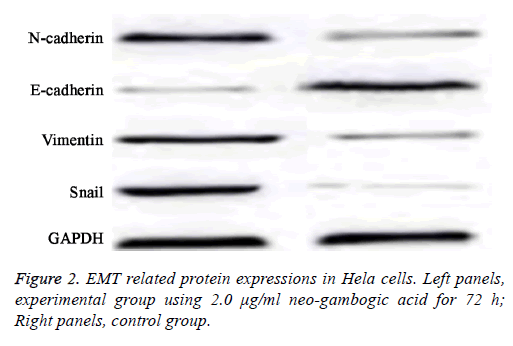 To further investigate the effect of cisplatin treatment on the expressions of miRNA, we performed real-time PCR to detect the expression of miRNA106b and miRNA93 expression in cisplatin treated Hela cells. Results showed that in those cisplatin-treated cells, elongated time period and higher concentration of neo-gambogic acid further decreased miRNA expressions (p<0.05, Table 4).

The rapid increase of cervical cancer incidence and the younger age of patients have been observed recently. Although the improvement of diagnostic technique has significantly reduced the mortality rate, the strong malignancy and higher mortality rate still severely affect the survival time and life quality of patients [7].

EMT is widely distributed in multiple malignant tumors with epithelial tissue derivation, and is mainly featured as the loss of epithelial cell polarity and acquirement of mesenchymal cell property, thus facilitating tumor infiltration and migration [8].

Recent studies have indicated that miRNA mutation and further expressional alternation may modulate the posttranscriptional expressions of target genes, thus affecting the sensitivity of tumor cells in response to chemotherapy agents [9]. As a family of non-coding RNA, miRNAs can specifically bind to 3’-untranslated region (3’-UTR) of target gene(s) to degrade mRNA, thus mediating post-transcriptional modification [10].

In this study Hela cells were transfected with miRNA106b and miRNA93. With different concentrations and time periods of neo-gambogic acid treatment, we found the decrease of the expressions of both miRNAs with higher concentration and/or elongated treatment periods. These results suggested that intervention using neo-gambogic acid on Hela cells could decrease the expression of miRNA106b and miRNA93 in a dose-dependent and time-dependent manner. Previous study has shown the synergistic effect of miRNA106b and miRNA93 in miRNA106b family in gastric carcinoma as they can suppress the expression of cell cycle-dependent protein kinase inhibitor P21, P57 and P27, leading to facilitation of G1/S transition of cells to accelerate cell cycle of cancer [11]. In breast cancer, it has been known that miRNA106b, miRNA93 and miRNA25 had synergistic effects on modulating SMAD37 to activate TGF-β signaling pathway, resulting in the acceleration of EMT [12].

In summary, neo-gambogic acid can decrease the expression of miRNA106b and miRNA93 in Hela cells in a dose- and timedependent manner. Neo-gambogic acid could also increase the sensitivity of Hela cells in response to cisplatin and decrease the incidence of drug resistance. It may also inhibit cell invasion and migration via elevating E-cadherin and depressing N-cadherin, Snail and Vimentin expressions, thus managing occurrence and progression of EMT, although its exact molecular mechanism requires further illustration in the future.