Citation: Elezi B. Survival of the patients after the first episode of AMI according to the risk factors. J Pharmacol Ther Res 2018;2(2):10-13.

Introduction: The term “risk factors” describe those characteristics that are found in healthy persons that are connected in an independent way with the occurrence of the associated cardiovascular disease. This term includes the lifestyle, biochemical and physiological modified characteristics, and also the personal unmodified characteristics such as: age, gender, and family history in the occurrence of cardiovascular disease in the early age (male<55 year’s old, female<65 years old).

Methodology: It is a cohort study for a period of 3 years, to value the prognostic abilities of the clinical characteristics of the patients in the moment of hospitalization in undesired results in long-term like the new occurrence of the infarct. To assess the effect of risk factors of cardiovascular disease in the occurrence or not in an another episode of AMI, we used the analysis curve of survival Kaplan Meier in the SPSS 16. A p<0.05 is considered significant.

Results: From 65 patients involved in the study, at the end of the study period, 16 of them had had an interest events (death/reinfarct) that is a significant way lower than its non-repeating (p<0.05). Change in the level of survival of individuals with AMI according to the presence or not the high blood pressure, according to the family history, use or not tobacco for the AMI is not statistically significant (Log Rank p>0.05). Changes in the level of survival of individuals according to the cholesterol level normal or high, presence or not of the diabetes has changes in the statistics (Log Rank p<0.05).

Conclusion: Knowledge of the risk factors that are also a prognosis factor of the patient performance with AMI helps in defining patients that needs to undergo a more specific check-up to avoid these undesired results. The reason that patients has been smokers, have, hypercholesterolemia history are at a higher risk to have a reserved prognosis of the disease (recurrence of myocardial infarct or death). Knowledge of this group would help in composition of personalized pursuance of the patients trying to reduce chances of the repeating of AMI and elimination in the time the recurrence of AMI.

Overall, the concept of risk factors poses a major advantage to the development of strategies for the prevention of coronary diseases [1-10].

The study included 65 patients with AMI (new episode the AMI). 16 patients or 24.6% had a recurrent AMI during the study years.

The study is designed as a cohort study for a three year period from 2009-2012. The study included patients that were admitted to the Elbasan hospital and treated for the new AMI during 2009.

They are taken in pursuit patients that have both residential district center of Elbasan. The study was performed partly in the regional hospital in Elbasan near the cardiology pavion and partly in the health centers of the city of Elbasan (part of cohort study).

The presence of coronary artery disease. A previous coronary artery disease in quality of ischemic heart disease different from AMI (obtained from the Medical file). After a history of diabetes as taken from the patient (dichotomous variable yes/ no). High values of hyperlipidemia (according to anamnesis if the individual gets or does not treat hyperlipidemia). Family heredity about the occurrence of AMI in the family (mother/ father or sibling/brother), defined as dichotomous variable yes or no).

The effect of the risk factors of the survival of patients with AMI was estimated at technique of Kaplan Mayer on the SPSS 16. A p<0.05 is considered significant.

Study included 65 patients with AMI (new episode of AMI). One in five patients were female (or 21.5%), presenting a significant difference and statistically significant compared to the men (78.5%) (On chi square p<0:05).

Table 1 provides data on the average age of patients and the standard deviation. The minimum age of a myocardial infarction is 48 years and maximum 85 years.

Table 1. Average age of the patients with new AMI

As indicated on in the graphic (Figures 1-6) at the end of three-year study period, 65 patients were included in the study, about 16 (25%) of them had have an event of interest (re-myocardial infarction) which significantly is most lower than his repeating of event (75%) (chi square, p<0:05). 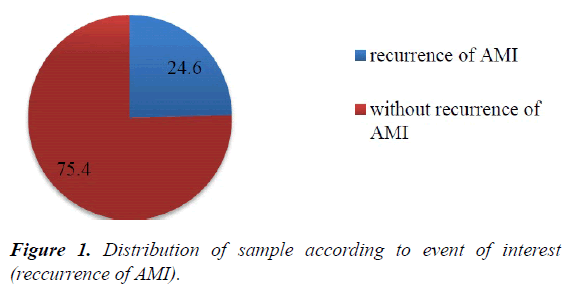 Figure 1. Distribution of sample according to event of interest (reccurrence of AMI). 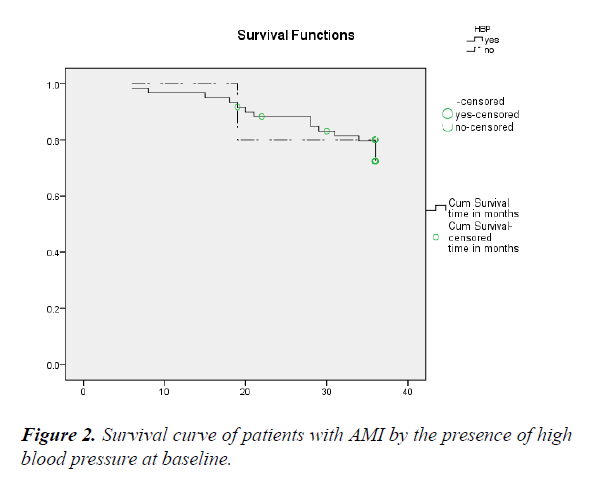 Figure 2. Survival curve of patients with AMI by the presence of high blood pressure at baseline. 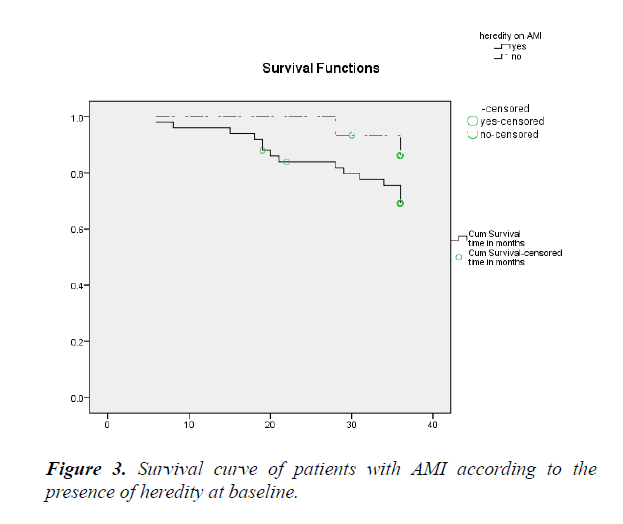 Figure 3. Survival curve of patients with AMI according to the presence of heredity at baseline. 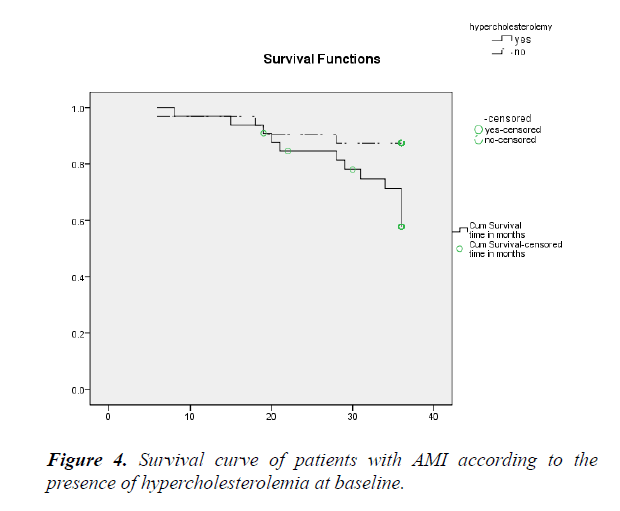 Figure 4. Survival curve of patients with AMI according to the presence of hypercholesterolemia at baseline. 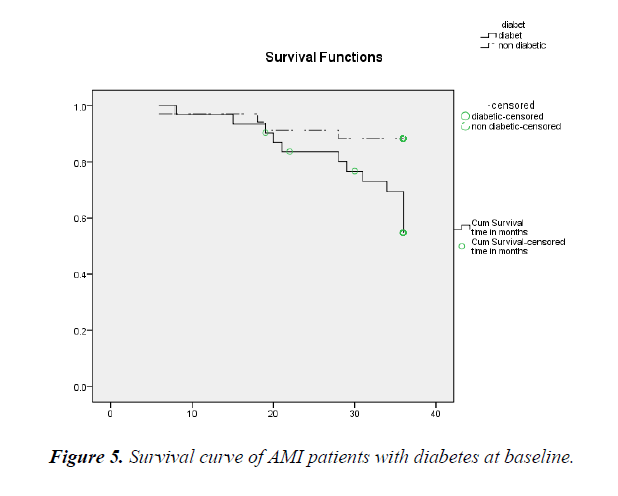 Figure 5. Survival curve of AMI patients with diabetes at baseline. 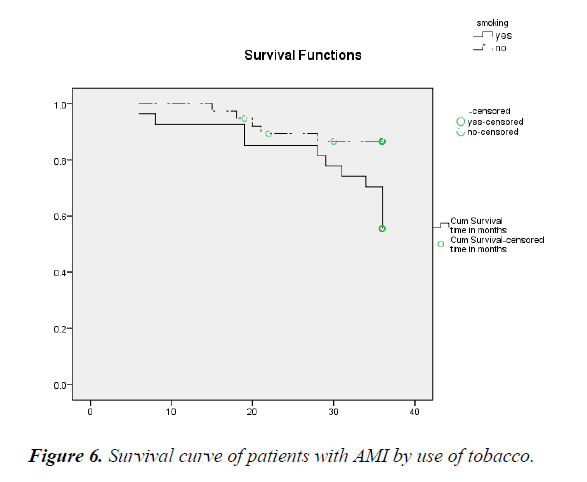 Figure 6. Survival curve of patients with AMI by use of tobacco.

Table 2. Distribution of risk factors in subjects who have passed the AMI.

Survival is higher in individuals that who not had high systolic blood pressure at the time of entry into the hospital than in individuals who have had arterial systolic pressure. The change in the survival rate of individuals by presence or wash arterial pressure does not change statistically (Log Rank p>0.05).

Survival is higher in individuals who are not diganosticated as diabetic at the time of hospital admission than in individuals who have diabetes in their history. Changes in the survival rate of individuals according to the presence or not of diabetes are statistically significant (Log Rank p<0.05).

In our best knowledge this is the first study that attempted to identify the risk factors on the survival of the patients after an episode of AMI and to prepare the foundation for further advance studies. Risk factors for cardiovascular disease have different effects on the progress of patients with AMI during the first years after the first episode of AMI. Knowing the risk factors that are and prognostic factors in the progress of patients with AMI helps determine who should undergo a more specific control to avoid these undesirable results. Patients who are smoking users at the time before the AMI episode are more likely to have an unsuccessful outcome compared to patients who have not been smoking users. This finding is consistent with other studies conducted where smoking is defined as a defective prognosis determinant [11,12]. High blood pressure and heritage are not prognostic factors in the progress of patients. This may be related to the fact that high blood pressure has been found in most patients who have had an AMI episode and have been undergoing treatment but are in line with the conclusions of other studies conducted in Brazil [10,12,13]. Contrary to another study underlining the fact that high blood pressure is a risk factor for undesirable results during the AMI episode [14,15]. This diversity can be linked to the methodology of study and selection of the sample. One of the most prognostic factors is hypercholesterolemia. Patients who have had high cholesterol levels are more likely to have recurrent AMI episodes during their course. This is related to the fact that high levels of cholesterol affect the performance of improving cardiac muscle function by increasing its susceptibility to a future episode of cardiovascular or myocardial infarction [12]. Even diabetes is another important factor that affects the performance of patients. The results of our study are consistent with other studies that consider diabetes as a significant factor [9,10,12-13].

Knowledge on risk factors present on admission may improve the long-term prognosis of patients. This is because patients who have been smoking, diabetes, history of hypercholesterolemia are at risk for having the poorer prognosis of the disease (re-occurrence of myocardial infarction or even death). So among the known risk factors for cardiovascular disease, the strongest prognostic factors for the long-term performance of patients who have had an AMI episode are the use of tobacco and the presence of diabetes and hypercholesterolemia. This is a finding consistent with the findings of the Framingham study [9,12]. Presence in the history of patients who have had an episode of myocardial infarction puts these patients in a no favourable prognosis regarding the progression after the episode of acute myocardial infarction.