The Department of Gastrology and Minimally Invasive Intervention Center for Digestion, The 309 Hospital of Chinese PLA, Beijing, 100091, China

Background: thymidine phosphorylase (TP) has been identified as a specific marker enzyme that is expressed in tumor-infiltrating macrophages, being associated with tumor angiogenesis and poor prognosis in patients with intestinal-type gastric cancer. However, the clinical and prognostic significance of TP expression in gastric cancer remains controversial. Publications were identified which assessed the clinical or prognostic significance of TP expression in gastric cancer from January 1995 to May 2013. A meta-analysis was performed to clarify the association between TP expression and clinical outcomes. A total of 13 studies met the inclusion criteria, and comprised 1541 cases. Analysis of these data showed that there was no statistically significant association of TP and tumor differentiation (pooled OR = 0.88, 95% CI: 0.67–1.15, Z = 0.94, P = 0.95, fixed-effect). There was significant association between the expression of TP and clinical parameters such as lymph node metastasis (pooled OR = 2.35, 95% CI: 1.42–3.88, Z = 3.34, P = 0.0009 random-effect) or lymphatic invasion (pooled OR = 1.71, 95% CI: 1.02–2.87, Z = 2.02, P = 0.04 random-effect).Moreover, in identified studies, the expression of TP was correlated with reduced overall survival (relative risk [RR] = 1.73, 95% CI: 1.06–2.82, Z = 2.19, P = 0.03). TP expression is associated with tumor aggressiveness and poor prognosis. If this finding is confirmed by well-designed prospective studies, TP expression may be a useful prognostic indicator for clinical outcome in patients with gastric cancer.

Gastric cancer is one of the leading causes of cancerrelated deaths worldwide, especially in Far East Asia, in countries such as Japan, China, and Korea [1]. Increasing evidence suggests that solid tumors, including gastric cancer, require neovascularization for growth and metastasis. It is also thought that the degree of tumor angiogenesis is related to clinical outcome, suggesting that angiogenic properties are correlated with tumor aggressiveness [2,3]. Recent studies have shown that macrophages, as well as malignant cells, are an important source of such angiogenic factors in solid tumors [4]. Kawahara et al reported that TP could be a specific marker enzyme that is expressed in tumor-infiltrating macrophages, being associated with tumor angiogenesis and poor prognosis in patients with intestinal-type gastric cancer [5].

TP, an enzyme originally isolated from platelets and also known as platelet-derived endothelial cell growth factor (PDECGF), catalyses the reversible phosphorolysis of thymidine to deoxyribose 1-phosphate and thymine. It has been proposed that one role for TP is to control the intracellular levels of thymidine, which at high concentrations becomes toxic to cells and causes replication errors in DNA [6]. Direct evidence of a role for TP in angiogenesis comes from experiments in which xenografts from transformed fibroblasts transfected with TP form more highly vascularized tumors than controls [8]. In addition, xenografts of the breast carcinoma line MCF-7, when transfected with TP, form more rapidly growing tumors than controls [8]. Increased expression of TP has been reported in a number of tumor types. TP expression was 260-fold higher in invasive cancers than in normal bladder samples and 40-fold higher in invasive cancers than superficial cancers [9,10].

A comprehensive computer literature search of abstracts about studies in human subjects was performed to identify articles about the prognostic role of TP expression in gastric cancer. The MEDLINE and EMBASE databases, from January 1995 to May 2013, were used with the following key words: “thymidine phosphorylase” or “TP” or “platelet-derived endothelial cell growth factor” or “PDECGF” or “gastric carcinoma” or “gastric cancer”, and “overall survival” or “OS”. All searched studies were retrieved, and their bibliographies were checked for other relevant studies identified were hand-searched to find additional eligible studies.

Information was carefully extracted from all eligible publications independently by two of the authors according to the inclusion criteria. Disagreements were resolved in consensus. The inclusion criteria were: (1) articles dealing with the expression of TP and either prognostic factors or overall survival (OS) of gastric cancer; (2)articles containing sufficient data to allow the estimation of an odds ratio (OR) or a relative risk (RR) of OS; (3) articles were reported in the English or Chinese (4) articles published as original research. Reviews, comments, duplicated studies, and articles unrelated to our analysis were excluded. Studies with fewer than 50 patients, follow-up less than 2 years, and relevant articles using RT-PCR or ELISA were also excluded.

The meta-analysis was performed as previously described [13]. For ease of analysis, the following data of the expression of TP and clinicopathological factors were comcombined into single categories: TP-negative and positive; and well and moderate differentiation. ORs with 95% CI were used to evaluate the association between the expression of TP and clinicopathological factors, including tumor differentiation, lymph node status and lymphatic invasion. Survival data were extracted from original papers as described by Parmar et al. [14]. Differences between the expression of TP and OS were quantified using RR with 95% CI. Heterogeneity across studies was evaluated with the Q test and P values. ORs and RRs were calculated by a random-effects model when the P value was less than 0.05. Otherwise, a fixed-effects model was used. The Begg and Egger funnel plot was used to assess publication bias. Statistical analyses were estimated using Review manager software. P values were two-sided, with significance at P < 0.05.

A total of 13 publications met the criteria for this analysis [12,15-26]. The total number of patients was 1541, ranging from 67 to 183 patients per study. Main characteristics of the eligible studies were summarized in Table 1. Thirteen articles dealt with clinicopathological factors. Six studies determined with OS. There was only one kind of methods used to evaluate the expression of TP in gastric cancer specimens: immunohistochemistry (IHC). 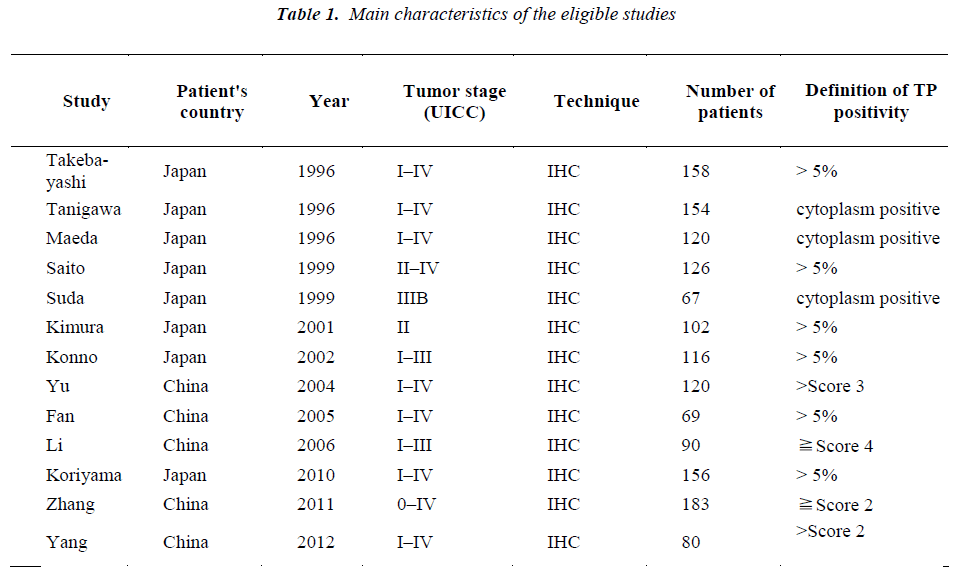 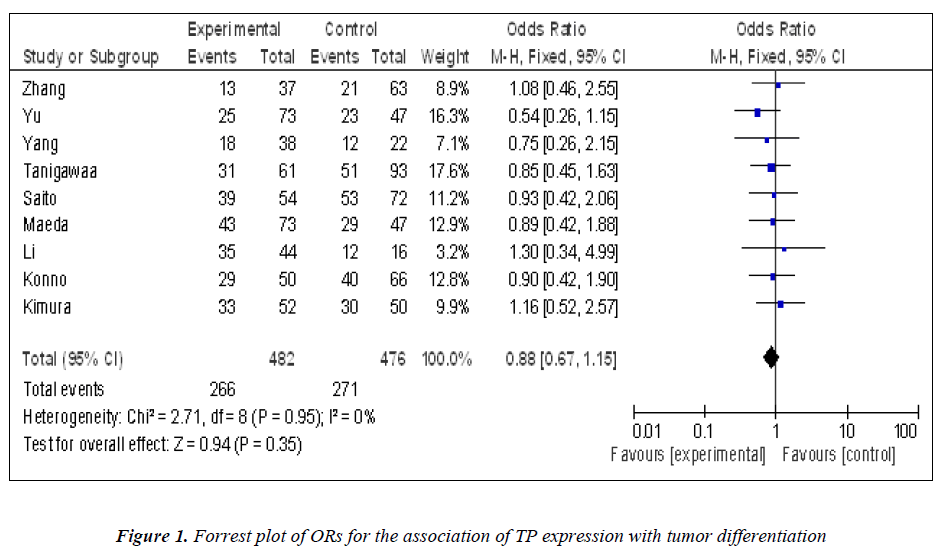 Figure 1: Forrest plot of ORs for the association of TP expression with tumor differentiation. 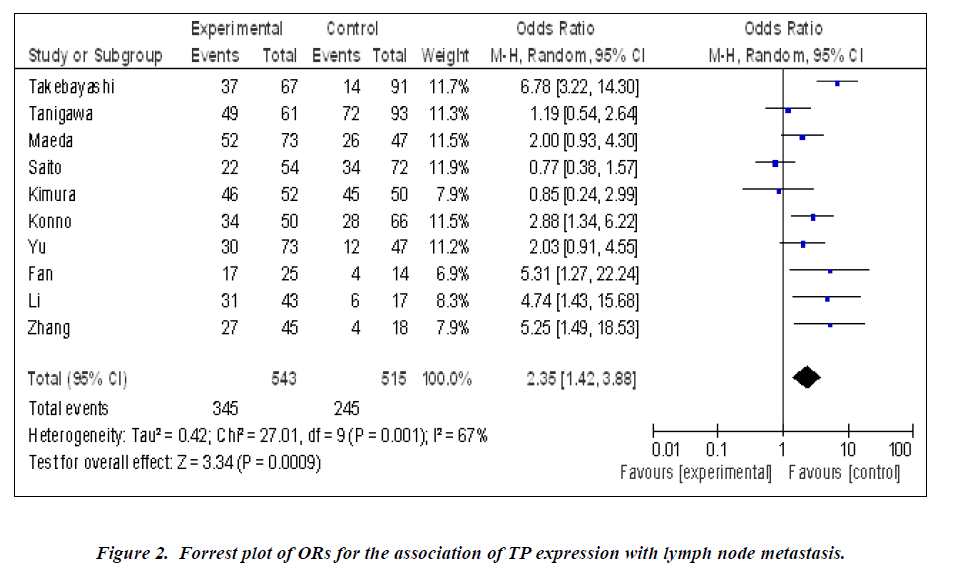 Figure 2: Forrest plot of ORs for the association of TP expression with lymph node metastasis. 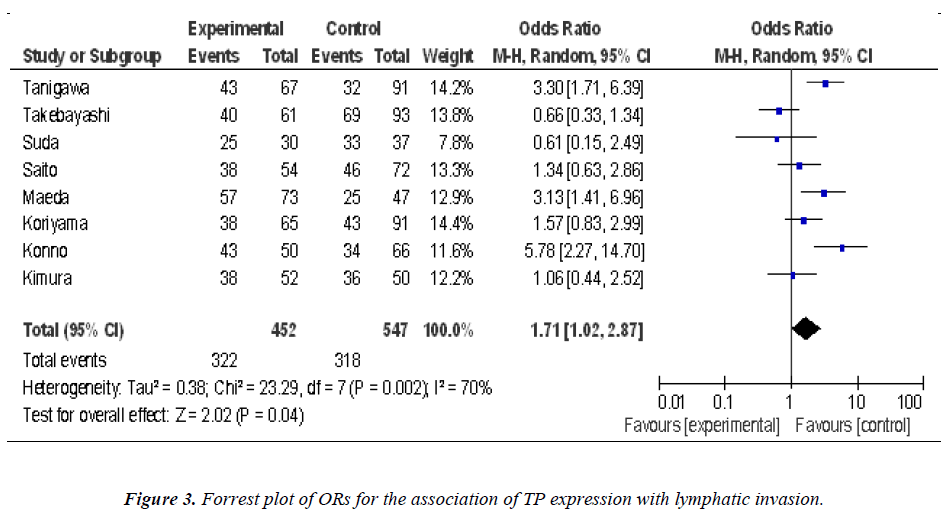 Figure 3: Forrest plot of ORs for the association of TP expression with lymphatic invasion.

The meta-analysis was performed on six studies (868 patients) investigating the association of TP expression and OS. The pooled RR was calculated using the methods described above. As the test for heterogeneity was significant (P < 0.0001), a random-effect model was used to calculate the RR. The presence of TP expression was highly correlated with poor OS (pooled RR = 1.73, 95% CI: 1.06–2.82, Z = 2.19, P = 0.03) (Figure 4). This indicated that TP was an independent prognostic factor in gastric cancer. No significant publication bias was detected. 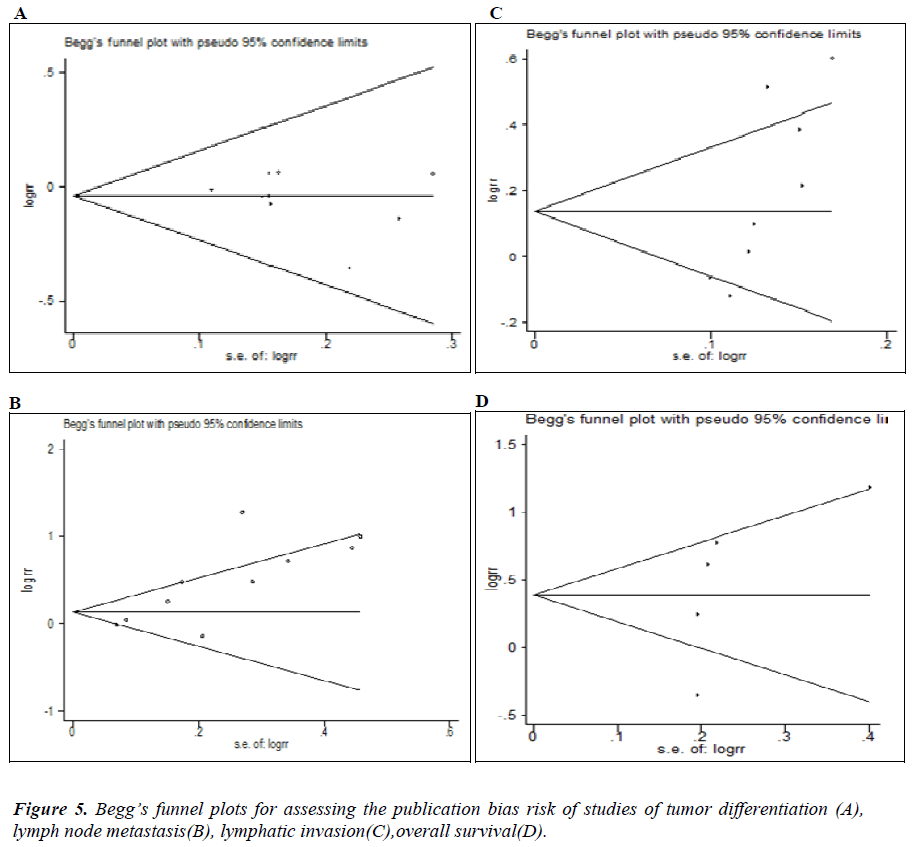 To our knowledge, the present meta-analysis is the first article to systematically examine the association between the expression of TP and gastric cancer survival. Our results indicated that the expression of TP, as detected with IHC, was significantly associated with lymph node metastasis , lymphatic invasion and OS, indicating that it might be a marker for poor prognosis of gastric cancer.

TP, an enzyme involved in pyrimidine nucleotide metabolism, has been shown to have angiogenic activity [27]. It can induce endothelial cell migration and tube formation in vitro [28]. Generally, TP expression is correlated with higher microvessel density, higher tumor stage, and more metastasis. An association of TP with tumor grade is evident in bladder, cervical, and renal cell cancer, but not in the other investigated cancers [29]. Furthermore, in most cases, TP appeared to be associated with poor prognosis, although there are conflicting reports for some cancers. For example, seven of the nine studies on colon cancer reported a significant correlation between TP and bad prognosis, while Saito et al. demonstrated that TP is associated with good prognosis [30]. As for gastric cancer, Tanigawa et al. [21] reported that the expression of dThdPase was significantly associated with the intratumoral microvessel counts and the incidence of hematogenous metastasis. However, no association was found between the expression of dThdPase and the overall survival of patients with gastric carcinoma . Takebayashi et al. [11] reported that the gastric cancer patients with dThdPase-positive carcinoma showed a significantly worse prognosis than those with dThdPase-negative carcinoma. This discrepancy might be caused by differences in tissue fixation processing, and staining techniques, experience of the observer in selecting hot spot and the technique of counting the dThdPase-positive cells. Thus, a meta-analysis was performed to try to resolve these apparent discrepancies. It was notable that the association was observed in our meta-analysis of TP expression and lymph node metastasis , lymphatic invasion and OS, suggesting that this protein can be developed for clinical applications.

A dThdPase inhibitor, 6 amino-5-chrolouracil, inhibited angiogenesis induced by dThdPase in a mouse gelatin sponge implant assay [27]. In addition, Takao et al. demonstrated that inhibition of dThdPase suppressed metastasis of dThdPase-transfected KB-3-1 cells in vivo [31]. Taken together with this evidence and our results, the growth of tumor expressing dThdPase may be inhibited by suppressing dThdPase expression.

To be sure, there were some potential limitations in this study. First, in prognostic factors meta-analyses, variability in definitions, outcomes, measurements, and experimental procedures might contribute to between-study heterogeneity [32]. In the current meta-analysis, despite the fact that we tried to optimize standardization, some remaining variability in definitions was unavoidable. Second, as reported above, potential publication bias was a concern. We restricted our review to articles published in English or Chinese language because other languages were not accessible to the readers. This selection could favour the positive studies that are more often published in English while the negative ones tend to be more often reported in native languages [33].