Oxidative stress is increased in diabetes and the overproduction of the ROS (full form ?) in diabetes is a direct consequence of persistent hyperglycemia for the production of inflammatory cytokines such as tumor necrosis factor (TNF)-α and interleukin (IL-6) in renal cells, which are the factors responsible for diabetic complications i.e. diabetic nephropathy. The study aimed to predict the development of type 2 diabetic nephropathy due to persistent hyperglycemia induced oxidative stress producing inflammation. Serum levels of inflammatory markers (IL-6 and Tnf-α), antioxidants, [Glutathione reductase (GR) and Glutathione peroxidase (GPx)], plasma malondialdehyde (MDA), fasting blood sugar, urea and creatinine levels were estimated in controls (n=50), controlled diabetes without diabetic nephropathy, T2DM without microvascular complication (n=50, groupI) and T2DM with diabetic nephropathy (n=100, group II). Sample was collected from J.A group of hospitals, GRMC, Gwalior (M.P) and ethical committee has approved this research work. Statistical method was done by using one way Anova utlizing Dunnet T3 test. Serum levels of inflammatory markers (IL-6 and Tnf-α), malondialdehyde, fasting blood sugar, were high in group II as compared to both group I and controls, (P<0.001), with group II having more significant than group I (P<0. 001). Antioxidant enzyme glutathione peroxidase was found to be decreased in both groups of diabetic patients as compared to controls, (P<<0.05), with group II showing significant than group I at (P<0.001). Glutathione reductase was found to be normal range in all the groups. Serum urea and creatinine levels were increased in group II, (P<0.001), but serum levels were within normal range in group I and healthy controls. Results of the present study indicates that inflammatory markers and oxidative stress are increased with decreased antioxidant defense levels in patients with diabetic nephropathy due to hyperglycemia induced oxidative stress.

Diabetic nephropathy is the most common cause of microvascular chronic complication of type-2 diabetes mellitus which is associated with considerable morbidity and mortality, finally leading to end-stage renal disease [1]1. Diabetic nephropathy is a progressive disease that takes several years to develop. It involves various functional clinical abnormalities of the kidney such as elevated creatinine, urea, albuminuria, decline glomerular filtration rate, elevated arterial blood pressure, and fluid retention [2,3]. The pathogenesis of diabetic nephropathy is likely to be multifactorial: it strongly dependent on the duration of diabetes; other risk factors include oxidative stress induced poor glycemic control, hypertension, hypertriglyceridemia, which increases production of cytokines IL-6 and Tnf-α from endothelial cells casing inflammation in type-2 diabetes [4].

Oxidative stress has been defined as a loss of balance between reactive oxygen species (ROS) and protective antioxidant defense system[5]. Increased oxidative stress induced by hyperglycemia may be due to multiple mechanisms (eg, the activation of polyol pathway, inhibition of pentose phosphate pathway, mitochondria dysfunction, activation of NAD(P)H oxidase, and uncoupling of endothelial NO synthase [eNOS], as well as impairment of antioxidant defense system [6, 7]. The oxidative stress generated by hyperglycemia increases reactive oxygen species (ROS), which leads to the activation of various redox-sensitive cell signaling molecules and the production of cytotoxic materials. This is followed by cellular dysfunction and damage, and ultimately results in diabetic micro and macrovascular complications [8, 9].

There is a strong belief that renal glomeruli are particularly sensitive to oxidative stress, suggesting the involvement and participation of ROS in the pathogenesis of diabetic nephropathy. Possible mechanisms for the induction of inflammation in vascular tissues may include activation of PKC pathway and oxidative stress upregulation of RAGE and activation of innate immunity [10]. For instance, carboxymethyllysine- protein adducts due to malondialdehyde, AGEs, can increase the expression of a variety of proinflammatory molecules and NF-κB through the interaction with RAGE in renal cells causing diabetic nephropathy in T2DM [11]

The study was carried out in Department of Biochemistry in collaboration with Department of Nephrology J.A group of Hospitals, G.R Medical College, Gwalior. The ethical committee of GRMC has approved this research work. The diabetic nephropathy patients attending Department of Nephrology in GRMC, J.A group of hospitals were included in this research work by their consent. The standard screening procedures such as fasting blood sugar, creatinine and radiological findings etc. were the criteria for selection.

Details of study are as follows:

Experimental designs of study are as follows: 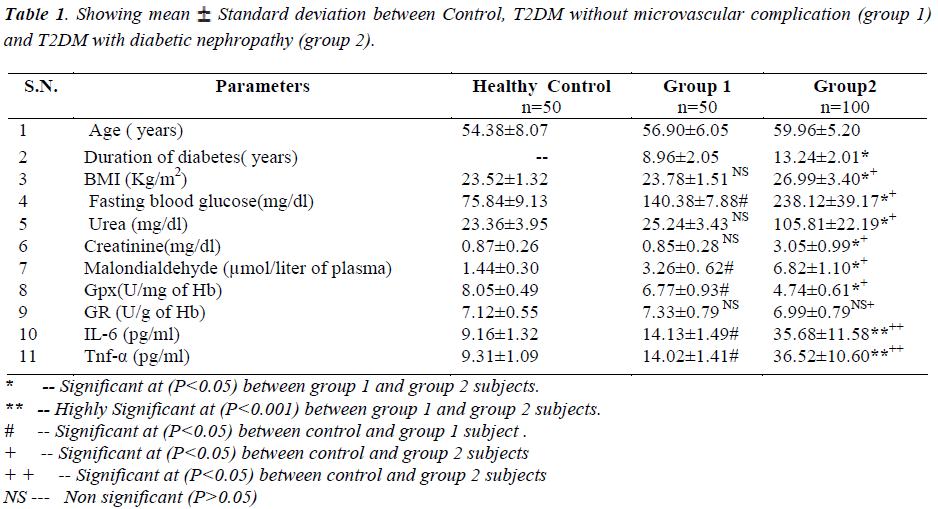 Statistical analysis was done by using One Way Anova utilizing Dunnet T3 test. One Way Anova was used to estimate differences between control, T2DM without microvascular complication and in T2DM with diabetic nephropathy. All parameters were given as mean± standard deviation. The criterion for significance was P < 0.05.

Diabetic nephropathy patients (group 2) have significant increase in fasting blood sugar, serum urea, creatinine, malondialdehyde and inflammatory markers (IL-6 and Tnf-α) levels but decrease in glutathione peroxidase as compared to both T2DM without microvascular complication (Group 1) and healthy controls. All the parameters are showing highly significant at (P<0.05).

Fasting blood sugar, serum urea and creatinine was increased in group 2 as compared to group 1 and healthy controls and was significant at 5% (P<0.05) .

The body mass index (BMI) was increased in group 2 as compared to group 1 and healthy controls and was significant at 5% (P<0.05) .

Inflammatory markers (IL-6 and Tnf-α) was increased in group 2 as compared to group 1 and healthy controls and was significant at 5% (P<0.001).

Oxidative stress depicts the existence of products called free radicals and reactive oxygen species (ROS) which are formed under normal physiological conditions, become deleterious when not being quenched by the antioxidant systems. The body mass index (BMI) increased in group 2 as compared to group 1 and healthy controls might be due to fluid retention in diabetic nephropathy patients. Peroxidation of cell membrane lipids, oxidation of proteins, renal vasoconstriction and damage to DNA are the negative biological effects of reactive oxygen species.. Our study showed moderate decrease of Glutathione reductase in both group 2 as compared to group 1 T2DM subjects but glutathione peroxidase level was significantly decreased in both group 1 and group 2 T2DM subjects as compared to healthy controls which might be due to hyperglycemia induced oxidative stress, glycation of antioxidant enzymes, low hemoglobin concentration and due to excess utilization of NADPH in renal mesangial cells via polyol pathway in type -2 diabetic nephropathy subjects (group2). Our study results were also consistent with (vaishali srivastava et. al 2004)[20].

ROS produced in hyperglycemia increases peroxidation of cellular membrane lipids as well as increasing the oxidation of proteins that yield protein carbonyl derivatives, producing high level of MDA in the diabetic nephropathy subjects which is a suggestive feature of oxidative stress in long standing type-2 diabetes. Our results are also consistent with the study reported by Cvetkovae et al, 2009[21].

End-stage renal failure (ESRD) due to diabetes mellitus has been recently described as a worldwide medical catastrophe. Development of diabetic nephropathy, a condition characterized by renal hypertrophy, is associated with pathophysiological changes in the entire kidney: glomeruli, vessels and the tubulointerstitium. A cellular nodular lesion is the main feature of the disease in the glomerulus. In the renal vessels, the presence of arteriosclerosis often compromises the tubulointerstitium, promotes fibrosis, and eventually leads to ESRD. The appearance of microalbuminuria (30 to 300 mg/dl) is an early indicator of renal involvement in this disease. Once overt proteinuria (>300 mg/dl) is present, confirming diabetic nephropathy, a steady decline in GFR occurs, so that about 50% of these patients can reach ESRD within 7-10 years. Our study shows increase in IL-6 and Tnf-α levels in group 2 subjects as compared to group 1 and healthy controls which might be due to hyperglycemia induced oxidative stress and advanced glycation end products which finally regulates the transcription of nuclear factor-Kappa binding (nf-Kb) in the nucleus producing cytokines, the mediators of inflammation in type 2 diabetic nephropathy subjects.

The released cytokines may have direct effect on the protein permeability barrier of the glomerulus causing alterations in hemodynamic factors of renal cells like glomerular basement membrane thickening, renal mesangial cell expansion and hyperplasia of extracellular matrix, a crucial lesion of diabetic nephropathy and a strong predictor of renal progression in long standing type-2 diabetic patients. Our study results are also consistent with (Alexandraki, 2006; Navarro-Gonzalez et al, 2008) [22, 23] showing increasing levels of cytokines (TNF-α and IL-6) in type2 diabetic nephropathy subjects.

So, finally our study concludes that inflammation is a cardinal process in the appearance of diabetes due to persistent hyperglycemia. The inflammatory milieu i.e. reactive oxygen species production in diabetic kidney contributes significantly to the development of diabetic nephropathy in T2DM.