Human myiasis is a rare parasitosis caused by infestation of larvae of the order Diptera. It is present in underdeveloped countries related to poor hygiene, alcoholism and mental illness. The infection can affect the skin, subcutaneous tissues and cavities, and the most frequent anatomical site of ophthalmomyiasis is the eyelid. Orbital involvement is rare and corresponds to 5% of cases, with an unfavorable prognosis. Less than 40 cases of orbital myiasis have been described in the literature, 3 of which are Brazilian cases, 3 reports in England, the United States and Canada. The authors describe two cases of orbital and eyelid ophthalmomyiasis, respectively. Both patients from rural areas and poor hygiene conditions. Oral Ivermectin was administered at a dose of 12 mg/day with no response in 24 hours, and then the surgical approach with good evolution in both cases was considered.

Myiasis is a parasitosis, which is determined by the invasion of certain fly larvae of the order Diptera in human tissues or from tissues of other vertebrates such as sheep and goats [1]. Most cases of primary myiasis in humans are caused by two species: Dermatobia hominis and Cochliomyia hominivorax [2,3,15]. Though rare, human myiasis is commonly seen in tropical and subtropical, overpopulated countries and with bad conditions of personal hygiene and public sanitation [3,4].

The objective of this study is to show two distinct presentations of the same parasitosis (orbital and palpebral ophthalmomyiasis) and to discuss the approach to this pathology not only from the descriptive and therapeutic points of view, but also as a disease with a large impact on public health.

LSM, 44 years old male, was admitted in the Accidents & Emergency sector of Hospital das Clínicas (Faculdade de Medicina, Universidade Federal de Minas Gerais- Brazil) with right orbital myiasis. He is a smoker and heavy drinker. He has a neurocognitive disorder, which made it difficult to obtain data from anamnesis. There was no reference of a previous pathology or wounds in the ocular or periorbital region.

During ectoscopy, the following was observed: a painful periorbital edema with induration on palpation, characterizing a case of orbital cellulitis, and also thickening of the lower eyelid with the withdrawal of the margins and the upper eyelid in a necrotic process. The presence of a large amount of living larvae of myiasis occupying the whole surface of the orbital cavity made it impracticable to visualize the eyeball (Figure 1). 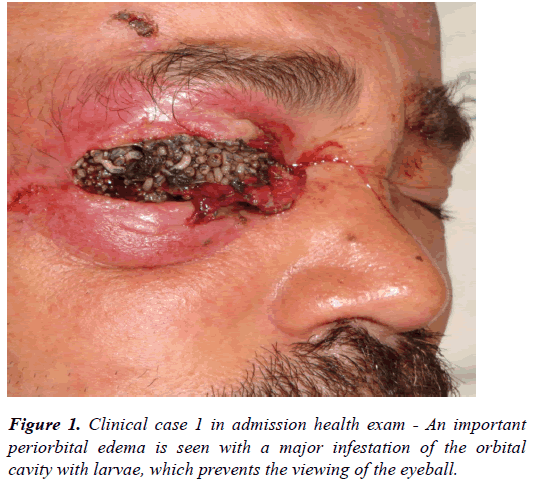 Figure 1: Clinical case 1 in admission health exam - An important periorbital edema is seen with a major infestation of the orbital cavity with larvae, which prevents the viewing of the eyeball. 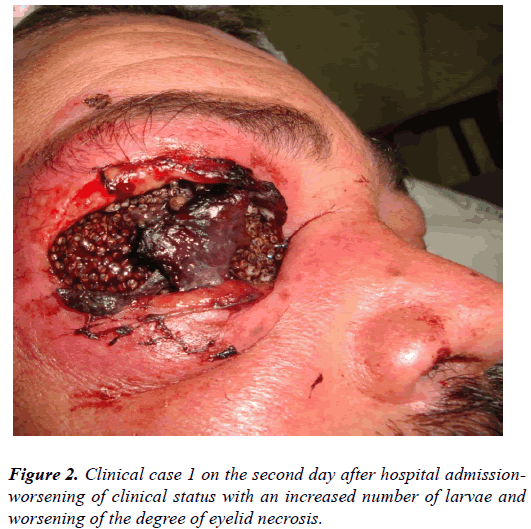 Figure 2: Clinical case 1 on the second day after hospital admissionworsening of clinical status with an increased number of larvae and worsening of the degree of eyelid necrosis.

He was psychiatrically diagnosed with schizophrenia and was prescribed with diazepam 5 mg and Lorazepam 1 mg via oral route, haloperidol 2.5 mg intravenously every 24h and bed restraint was indicated.

CT scan of the orbit showed a large area of right periorbital inflammation with loss of the eyeball architecture, thickening of the scleral wall and hyperdense areas extending to the orbital apex. Extrinsic muscles and optic nerve were in anatomical conformation (Figure 3). 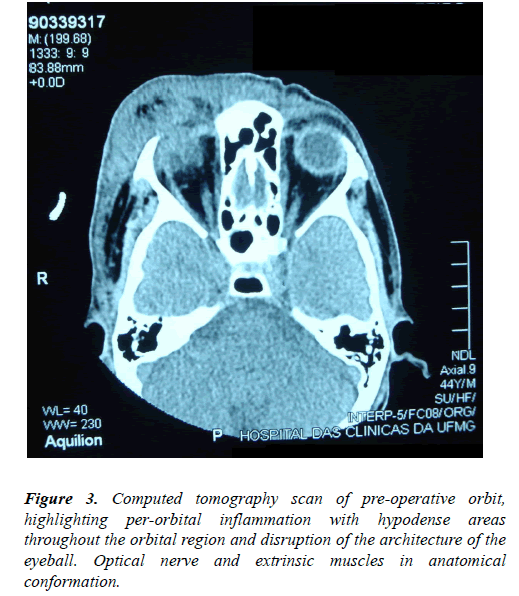 Figure 3: Computed tomography scan of pre-operative orbit, highlighting per-orbital inflammation with hypodense areas throughout the orbital region and disruption of the architecture of the eyeball. Optical nerve and extrinsic muscles in anatomical conformation.

Given the inadequate response after 48h of oral ivermectin and a high risk of intracranial extension of the lesion, we have decided to perform a surgical exploration of the right orbital cavity.

Initially, larvae were mechanically removed and superficial necrotic tissue was debrided. Atrophic eyeball was found with absence of cornea, diffusely thickened sclera and living larvae in the intraocular space (Figure 4). All the orbital content was exenterated, and parasites were also found in the apex region. The cavity was left only with the periosteum coating aiming at granulation and cicatrization later. 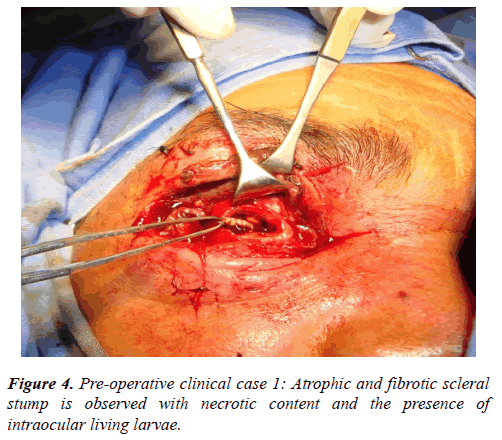 A total of 295 larvae were removed from the patient’s orbital cavity. Compressive dressing was applied, medication was maintained and an urgent neurological assessment was required because of a possible intracranial extension of the infection. The hypothesis of cranial involvement was discarded after magnetic resonance imaging (MRI) and liquor puncture was performed on the second day of the postoperative period. When changing the dressing, three living larvae were still found in the cavity. Anatomopathological result has shown diffuse ectoparasites in between the fibrosis tissue, however, with no areas suggesting neoplasm in the sample. Larva was identified in the parasitological study as C. Hominivorax (Figure 5). 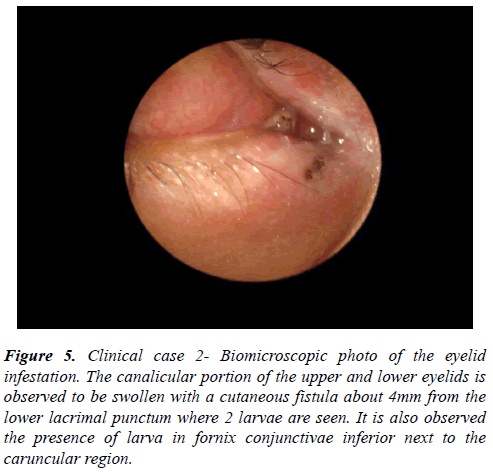 Figure 5: Clinical case 2- Biomicroscopic photo of the eyelid infestation. The canalicular portion of the upper and lower eyelids is observed to be swollen with a cutaneous fistula about 4mm from the lower lacrimal punctum where 2 larvae are seen. It is also observed the presence of larva in fornix conjunctivae inferior next to the caruncular region.

JL, 34 years of age, male was admitted in the Accidents & Emergency sector of Hospital São Geraldo – Hospital das Clínicas-UFMG with right palpebral myiasis. He lives in the rural areas and he is a heavy drinker but denies smoking. He sought the health service alone and with no referral of possible contacts. He complained of intense eyelid and nasal pruritus and mentioned finding a living larva while blowing his nose on the previous day. He denies any previous eyelid trauma or lesions. He was referred to clinical evaluation together with psychiatric evaluation and opted for the administration of vitamin B12 and Benzodiazepines, in addition to the patient’s follow-up throughout the hospitalization.

During ectoscopy, the presence of an edema in the canalicular portion of right lower and upper eyelid was observed with the withdrawal of the margins. Cutaneous fistula was observed through biomicroscopy on the circular lower eyelid with 4 mm of diameter, and about 4 mm from the right lower lacrimal more larva was found in the lower conjunctival cul-de-sac next to the caruncular region, which, with every blink, would move inside the possible micropuncture created between the lower conjunctival fornix and the skin (Figure 6-8). A great number of pseudomembranes were formed in upper and lower tarsal conjunctives, mechanically removed during the examination. 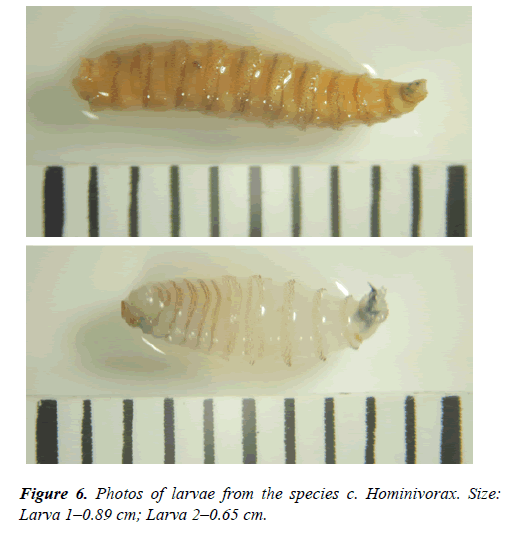 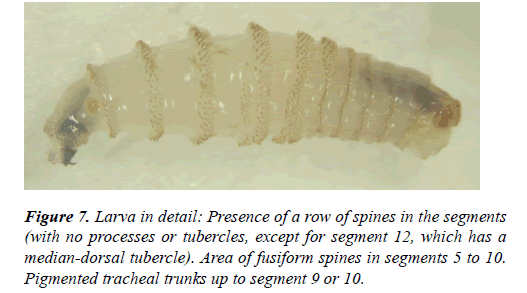 Figure 7: Larva in detail: Presence of a row of spines in the segments (with no processes or tubercles, except for segment 12, which has a median-dorsal tubercle). Area of fusiform spines in segments 5 to 10. Pigmented tracheal trunks up to segment 9 or 10. 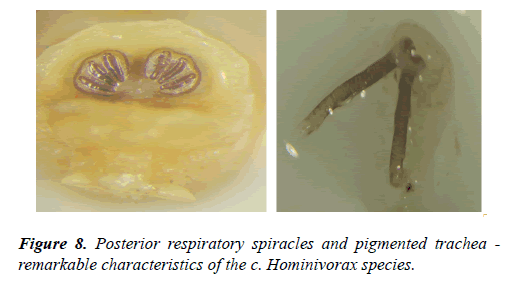 Oral ivermectin 12 mg (two 6 mg tablets) was administered with no response after 24 hours of observation. Lacrimal ducts were suspected to be involved due to the fact that larva was reported in the nasal cavity. Irrigation of lacrimal ducts was carried out through the upper and lower lacrimal punctum with the patient referring the early physiological saline solution in the oropharynx with little reflux and with no presence of larvae in the nasal cavity during the otorhinolaryngological examination.

Surgical exploration performed 24 hours after admission. Viscoelastic substances used in cataract surgeries were used in an opening of a cutaneous and conjunctival fistula, with a delay in the appearance of larvae and mechanical removal of three larvae. When the fistula was enlarged, a larva was found in between the pretarsal orbicularis muscle. Upper eyelid had no parasites. Due to an important edema, a monocanalicular intubation of the right lower lacrimal duct was performed with silastic and silk suture 5.0.

On the first day of the postoperative period, the patient found another larva on the nose. Silastic was withdrawn after 7 days of postoperative period with a positive irrigation of the right lower lacrimal punctum in oropharynx. Upper lacrimal pathway was also patent. Improvement was seen in the edema and in the conjunctive, also with papillae and no pseudomembrane formation.

Most cases of Ophthalmomyiasis are limited to the larval invasion in superficial periocular tissues or by their penetration in the eyelids, conjunctive or sclera. The most severe form of Palpebral myiasis usually has a favorable outcome, different from the orbital myiasis, which, in all cases revised in the literature [1-8] have a negative outcome. In the present case, the rapid infestation and the degree of necrosis in the tissues made it impossible to preserve the orbital contents, with no other option except the exenteration. In contract with data shown in the literature [1,2,8], oral ivermectin used before the surgical procedure was not efficient in the preoperative control of the infestation neither in the orbital myiasis nor in the palpebral one, requiring the early removal of living larvae from the orbital cavity and from the eyelid, respectively. One of the reasons to the treatment failure might be a possible underdose to that proposed in the treatment of these parasitoses. Some studies have obtained good results with higher oral doses (300 ug/kg/day) [16], or even with subcutaneous ivermectin (300 mg/kg/dose) according to Duque et al., (2011) for oral myiasis [9].

As shown in the two case reports, ophthalmomyiasis may have a favorable outcome when early diagnosis and treatment are provided; however, it may evolve as a very mutilating pathology. Severe conditions such as the orbital myiasis reflect a social reality very far from what is expected from Brazil as a model of public health care and should be reviewed as a whole with educational measures, case notifications and a closer proximity to the parasitologist and public institutions to plan to eradicate the parasite.

Despite the decentralization of health in Brazil, it is still difficult to include isolated rural areas in terms of health care, which slows the diagnosis and treatment of parasitoses. 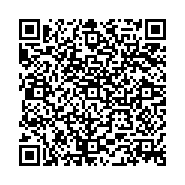