A randomized controlled trial was done in Italy in which fathers went through a two-hour pre-natal education session on infant care as well as breastfeeding assistance to their partner. The result was a 33% difference in breastfeeding initiation among women whose partners had attended the class, in comparison with the controls [8]. Another study in Italy, also found that teaching fathers how to prevent and manage the most common lactation difficulties had a marked, positive impact on breastfeeding continuation. Few (15%) mothers whose partners had been simply told about the benefits of breastfeeding were still breastfeeding at age six months; but when the men were individually given information for just 40 minutes on management of common problems (for example pain and discomfort, fear that baby isn’t ‘getting enough’ and breastfeeding-issues when mum returns to work) the percentage of mothers still breastfeeding at age six months was 25%. The impact was particularly strong among women who had reported difficulties with lactation (4.5% vs. 24%) [9].

In Kenya, most community programs seeking to improve the well-being of women and children target young mothers and their children [1]. Few initiatives in the country have engaged men in efforts to improve the infant feeding [1]. A pilot project done in Western Kenya, engaged men through nutrition education on the infant and young child feeding practices through group training of men facilitators using a training manual targeted to men [10].

Nutrition education materials on recommended breastfeeding and complementary feeding practices with specific information tailored for fathers emphasizing their unique and vital role in the success of breastfeeding and complementary feeding were developed. The education material was based on the UNICEF integrated infant and young child feeding counseling, a training course released in 2012 [11] and Infant and Young Child Feeding and Gender manual prepared by the Infant & Young Child Nutrition (IYCN) Project for the men's groups activities [10].

The study was a randomized controlled trial (RCT) where participants were randomized into either an intervention (receiving education on infant feeding) or a control group (not receiving education on infants feeding). The target population was fathers (husbands of women who are recruited at 6 months pregnant at the time of recruitment into the study) and motherinfant pair.

Calculation of the sample size was done using the formula by Johnson et al. [12]. The study expected an effect size of 20% based on the intervention of nutrition education targeting both father and mother. This was because the outcome was expected to be better than that of a previous study done in Italy which conducted the nutrition education sessions post-natal thus, not much time for father-mother pairs to make an early informed decision. Our study conducted the nutrition education sessions pre-natal with the expectation that father-mother pairs will be in a position to make an early informed decision which could influence right from early initiation of breastfeeding. The study in Italy had considered a difference in the effect of the intervention of 15% and used a standard deviation of 0.58 [9].

Considering a 10% attrition rate, the total sample size was 145 which was the number considered for the intervention group which would receive the nutrition education intervention.

Overall, 290 father-mother pairs were enrolled in the study. Ten participants were recruited per day from those who agreed to take part in the study from a daily attendance to the antenatal clinic of 75 pregnant women with an estimate of a third being 6 months pregnant according to the hospital profile. Contacts of the recruited study participants were taken and used to follow up on the fathers for their consent to participate in the study.

All the women who were 6 months pregnant between January and April 2016 and attending the antenatal clinic at Kisumu County Hospital were eligible for inclusion in the study. Once recruited, each woman provided the telephone contact of the father-to-be. The latter were then invited to participate in the study. A meeting between the father-mother pairs and the study team took place within 2 weeks of the first contact. The pair were asked to pick one among pre-numbered papers which randomly put them in either the intervention or control group.

Delivery of the nutrition education intervention

Direct (teacher-directed), interactive (discussion, sharing) and experiential (learner-centered, activity-oriented) instructional strategies were used in the education sessions. Demonstrations on positioning and attachment of the baby to the breast, expressing of breast milk and food demonstrations were done for maternal nutrition and complementary feeding to show how to ensure consistency, frequency, and variety per different age groups. Role plays were done to demonstrate how the father can rub the back of the mother to stimulate milk production, how a father can encourage the mother to build her confidence in breastfeeding, cup feeding for the expressed breast milk and playing with the baby to stimulate growth and development. Case studies were done on how to manage common breast conditions such as engorgement, inverted nipples, and flat nipples. Procedures for preparing nutritious meals based on promoted recipes were described during the sessions. The recipes were based on the seven food groups recommended for children [6]. Fathers were also enlightened on the supportive role they can play such as ensuring there is adequate nutritious food for the mother during pregnancy and lactation, supporting the mother during delivery by encouraging her to put the baby to the breast within an hour of birth, rubbing the mothers back to stimulate milk production, holding the baby for the mother to get rest, cup feeding the baby on expressed breast milk, providing adequate nutritious food for the baby during complementary feeding, helping in feeding the baby, helping in taking care of older children and doing household chores.

The study considered the social cognitive theory for behavior change. Father involvement through nutrition education was expected to result in adequate knowledge on infants feeding by the father and fathers' know-how of the supportive role they can play in infant feeding. This would result in positive environmental influence to the mother and improved adherence to recommended infant feeding practices at the household level. Hence leading to an improved nutritional status of the infant expected to contribute ultimately to the reduction in malnutrition rates and morbidity patterns.

At baseline, the odds of fathers in the intervention group being more knowledgeable about breastfeeding than fathers in the control group were measured. The result was not statistically significant (Table 1).

Note: EBF: Exclusive Breastfeeding; The level of significance based on odds ratio is p-value <0.05.  The figures in the bracket are ‘n' with N=145 in the control group and N=145 in the intervention group. The figures outside bracket represent the % within the group.

Table 1. The odds ratio for father's knowledge about breastfeeding pre-intervention.

Note: EBF: Exclusive Breastfeeding; The level of significance based on odds ratio is p-value <0.05. * used for P<0.05 and ** used for P<0.01. The figures in the bracket are ‘n' with N=142 in the control group & N=137 in the intervention group. The figures outside bracket represent the % within the group.

Pre-test and post-test results for the intervention group 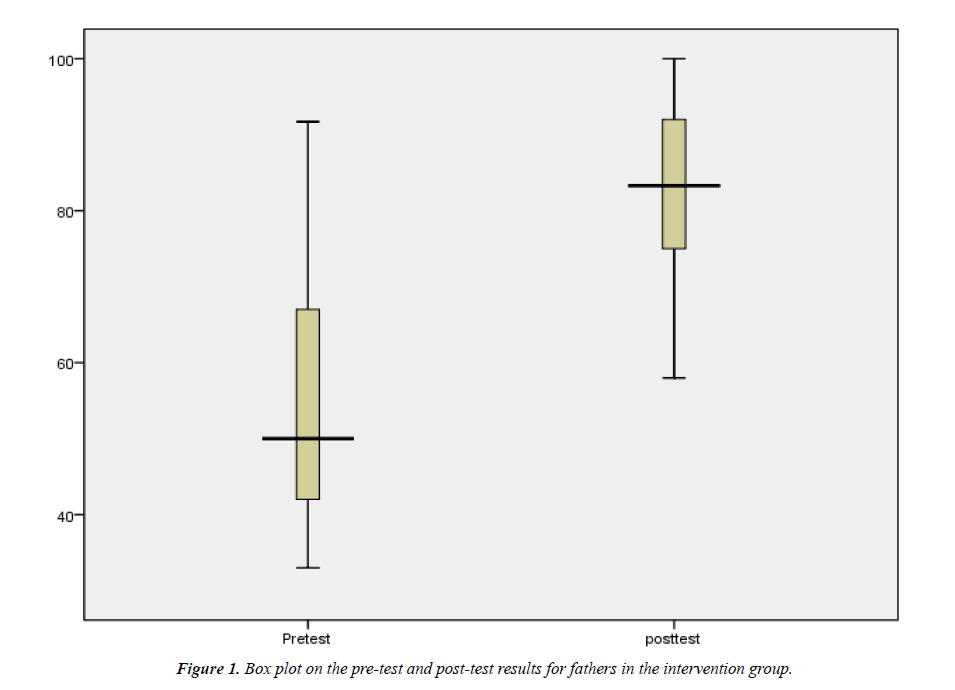 Figure 1. Box plot on the pre-test and post-test results for fathers in the intervention group.

Assessment and rating of the nutrition education sessions

In terms of time allotment, the majority of the fathers (73.4%, n=106) felt that the 4 hours allocated was about right while 58.5% (n=85) of the mothers shared the same view. Over half (55.3%, n=80) of the fathers were of the opinion that the content taught was extremely relevant in assisting participants in practicing recommended infant feeding practices. A third (54.5%, n=79) of the mothers agreed to the opinion of the content being extremely relevant in assisting in the practice of recommended infant feeding practice. In terms of teaching quality, over three-quarters (75%, n=109) of the fathers felt that it was very high with a similarly high percentage of the mothers holding the same opinion (77%, n=112). The teaching method which encompassed a lot of discussions, demonstrations and role plays was termed by a majority of the fathers 67% (n=97) and mothers 74.8% (n=108) as appropriate. On the other hand, the interest level of the participants in the contents taught was rated as very high by both the father and mother at 79.3% (n=115) and 81% (n=117), respectively.

Chi-square results where p>0.05 indicates not statistically significant, N=290, n=145 for both the control and the intervention groups.

Table 3: Rating for the nutrition education sessions by the intervention group.

Studies have shown that a lack of knowledge can influence the success and duration of breastfeeding [13-15]. The fathers’ knowledge level about breastfeeding was considered key for supporting the mothers’ decisions and actions [8]. Similar to our study at baseline, a cross-sectional study was done in Brazil that assessed paternal breastfeeding knowledge during pregnancy. The findings showed a lack of breastfeeding knowledge among the fathers with a specific knowledge deficit on how to manage breastfeeding complications, promote lactation and assure a proper latch [16]. Our findings indicated an increase in knowledge on infant feeding by fathers when fathers were exposed to nutrition education. This, therefore, is a pointer that nutrition education strategies that involve fathers could positively impact on their knowledge levels..

In our study, the nutrition education sessions took place prenatal within a hospital setting to fathers and mother in the intervention group. The exclusive breastfeeding rates were higher in the group in which both the mothers and the fathers were educated about exclusive breastfeeding than in the groups in which there was no education and in which only the mothers were educated[14]. Recommendations from another study are that nutrition education to the father should take place during the antenatal period and the baby’s first quarter [17]. A trial offering fathers a 2-hour breastfeeding antenatal class and postnatal support found that breastfeeding levels were increased at 6 weeks post-partum [18,19]. Another study that invited fathers to attend breastfeeding antenatal classes alongside their partner increased the duration of exclusive, but not overall, breastfeeding [14].

Health professionals can utilize opportunities such as antenatal visits to educate the fathers on infant feeding which can be a cost-effective channel of reaching the fathers. Majority of the fathers reported receiving new information and seeing relevance on what was taught. This can demystify the notion that childcare is only a woman's concern and look for avenues to reach out to the fathers as well.

The main limitation of our study is that though it draws upon literature from other countries, the analysis does not take into account possible cultural similarities and diversities with regards to what constitutes a father’s support. Hence further research that includes testing an international model of the fathers’ support relating to infants feeding which could build on and expand the findings reported here, paying particular attention to the cost-benefit analysis to investigate the cost-effectiveness of the classroom-based nutrition education strategy and to ascertain the feasibility of implementing it in various settings. In addition, the study sample was selected from a hospital setting which has possible differences with the community settings as antenatal clinic visits are not optimal in Kenya which could have affected the representation of the population sampled.

Nutrition education to the fathers can improve their knowledge on infant feeding and equip them with skills on providing a supportive role. The fathers revealed a lack of knowledge on infants feeding prior to the intervention which points to the importance of healthcare professionals to consider avenues of reaching out to the fathers in prenatal infant feeding promotion interventions. The time allotted for the nutrition education session can be split to cover the 4-hour session during different contact points during the antenatal period.