Sepsis is a major health problem worldwide and is associated with a high mortality. However, as ICU-mortality is decreasing in developed countries, cognitive and physical impairment in survivors of critical illness constitutes an increasing burden on the health care system and significantly reduces quality of life in affected patients. Intensive Care Unit Acquired Weakness (ICUAW) is a frequent problem which is caused by either critical illness polyneuropathy, critical illness myopathy or a combination of both. As a prominent negative regulator of skeletal muscle mass myostatin has been extensively studied in different pathologies involving muscle wasting and dysfunction such as muscular dystrophy, sarcopenia and heterogenous causes of cachexia (chronic inflammatory diseases, cancer etc.). In this review we focus on myostatin’s potential role as a biomarker and pharmacological target in the setting of critically ill patients.

Sepsis is a major health problem worldwide and is associated with a high mortality. However, as ICU-mortality is decreasing in developed countries, cognitive and physical impairment in survivors of critical illness constitutes an increasing burden on the health care system and significantly reduces quality of life in affected patients. Intensive Care Unit Acquired Weakness (ICUAW) is a frequent problem which is caused by either critical illness polyneuropathy, critical illness myopathy or a combination of both.

In this review we focus on myostatin’s potential role as a biomarker and pharmacological target in the setting of critically ill patients.

;) family. Since it was first described by McPherron, et al. [1] it has raised scientific attention for its role as a negative regulator of muscle growth. Myostatin is predominantly expressed in skeletal muscle but can also be found in adipose tissue [1] and heart muscle [2]. Myostatin gene deletion in mice lead to a significant increase in skeletal muscle mass caused by both hyperplasia (increase in number of fibres) and hypertrophy (increase in fibre size). Conversely, systemic overexpression of myostatin in adult mice resulted in significant loss in muscle and fat mass similar to that observed in human cachexia [3]. In 2004 the case of a hypermuscular child with a homozygous mutation in the myostatin gene resulting in a premature termination codon and therefore a loss-of-function was reported [4]. At 4.5 years of age the infant was able to hold two 3kg dumbbells in horizontal suspension with his arms extended. These findings amongst many others fueled hope that myostatin inhibition might be a useful pharmacological target in treating muscular dystrophy, sarcopenia and cachexia in numerous clinical settings.

Sepsis is recognized as a major health problem on a global scale and is associated with a high mortality [5]. The pathophysiologic reaction in sepsis involves activation of both pro- and anti- inflammatory mediators culminating in a dysregulated host response and life-threatening organ dysfunction that often requires intensive care [6]. Incidence of ICUAW is a growing concern, as ICU mortality is declining in developed countries affecting many survivors of critical illness [7,8]. Research has tried to unravel the role of myostatin in critical illness, sepsis and its potential influence in the development of ICUAW

Latent myostatin is activated by proteolytic cleavage from its inhibitory prodomains. The active myostatin dimer then binds to the Activin Receptor Type II B (ActRIIB) which forms a heterodimer with Activin-Like Kinase 4 (ALK 4) or ALK 5. Phosphorylation of transcription factors Sma- and Mad-Related Protein (SMAD) 2 and SMAD 3 by the intracellular kinase domains of the ALKs leads to a complex formation with SMAD 4 and finally translocation of the complex to the nucleus. The transcription factors induce genes involved in protein degradation [9] and inhibition of myoblast proliferation and differentiation [3].

Of note, other members of the TGF-

; 1 itself, bind to ActRIIB as well inducing protein breakdown [12].

Role of Myostatin in Animal Models of critical Illness/Sepsis

Smith, et al. [13] reported a reduction of both myostatin mRNA levels in muscle tissue and of plasma levels in septic rats that had been subjected to cecal ligation and puncture for sepsis induction.

Due to their outstanding role as a negative regulators of myoblast proliferation, differentiation and muscle growth, myostatin and other members of the TGF-

; superfamily have been targeted pharmacologically to prevent muscle-wasting in sepsis and critical illness. LY364947 competitively binds ALK 4 and 5 inhibiting heterodimer formation of ALK 4 and 5 with ActRIIB. This results in blocking of myostatin, activin A and TGF-

; may have a biphasic action with an anti-inflammatory action during the first hours of sepsis and a catabolic action in the later, more chronic stages of sepsis.

In a recently published knockout rodent model of sepsis induced by Cecum Ligation and Puncture (CLP) myostatin-deficient mice showed improved survival, less muscle wasting 14 days after CLP, a more efficient bacterial clearance (as determined from abdominal lavage and blood from cardiac puncture 16h after CLP) as compared to body-weight-matched wild-type mice. Mice were euthanized 14 days after CLP for final analysis [19]. The discrepancies between the mentioned animal models may arise because of the lack of selectivity of the inhibitor used, which also blocks activin A and TGF-

ICUAW is reported to occur in about 25% to 67% of patients depending on the clinical setting [15] and is caused by either axonal neuropathy, primary myopathy or both. ICUAW leads to longer hospital stay, prolonged weaning and is independently associated with mortality [8].

As a negative regulator of muscle mass myostatin has been studied in different ICU settings. It was found to be decreased significantly 4 and 30 days after cardiovascular and orthopedic surgery with an inverse correlation to C-Reactive Protein (CRP) [16]. The acute phase of patients with burn injury comprising>10% total body surface area (within 48 hours of trauma) was accompanied by a significant decrease in myostatin, whereas in the chronic catabolic phase after 9 months to 12 months myostatin (Figure 1) was upregulated and inversely correlated with muscle strength [17]. Data from a large cohort of critically ill patients of a medical ICU showed that low myostatin levels inversely correlated with established markers of systemic inflammation such as leukocytes, CRP, procalcitonin and IL-6 and were associated with a poor outcome [18-20]. 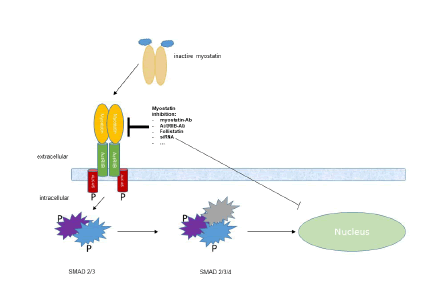 Myostatin is activated after cleavage from its prodomain. The myostatin dimer then binds to the Activin Receptor Type II B (ActRIIB). ActRIIB recruits type 1 receptor serin kinases Activin- Like Kinase 4 (ALK 4) or ALK 5. This heterodimer phosphorylates and activates Sma- and Mad-related Protein (SMAD) 2 and SMAD 3, which form a complex with SMAD 4 before migration to the nucleus where it exerts its function as transcription factor.

Myostatin serum levels in a small subset of patients at day 7 following ICU admission, our study lack Myostatin evaluation at multiple time-points during ICU treatment. We established an ideal prognostic cut-off value that best discriminates between ICU patients with a favourable or unfavourable outcome. Importantly, this cut-off value does only apply to our cohort of patients and clearly needs further validation before clinical implementation. Together, our results need to be validated in larger, multi-centre cohorts of ICU patients to fully understand the regulation of Myostatin in critically ill patients and its role in predicting patient’s outcome.

The role of myostatin in critical illness and sepsis and its potential implication in ICU-acquired weakness and muscle wasting is still not completely understood.

In different cohorts of both medical and surgical patients on an ICU downregulation of myostatin correlated with the increase of well- established markers of systemic inflammation as CRP in the acute phase of critical illness.

It can be hypothesized that downregulation of myostatin in the early phase of systemic inflammation constitutes a physiologic reaction to a harmful stimulus, whereas its compensatory upregulation in the course of prolonged inflammation or sepsis promotes protein degradation and muscle wasting.

Pharmacological inhibition of myostatin signaling pathways and myostatin gene knockout in animal models of sepsis lead to preserved muscle mass and, in the case of myostatin knockout, to improved survival compared to control groups. In the future, components of the myostatin pathway may serve as pharmacological targets to attenuate the harmful long-term consequences of critical illness.

In summary, more research is needed to elucidate the role of myostatin in a “normal” physiological inflammatory reaction in comparison to the dysregulated host response seen in sepsis which results in life-threatening organ dysfunction and to find pharmacological targets for a clinical use.

The authors declare no conflicts of interest