Background: Synthetic musk has been considered as emerging organic pollutant in pharmaceutical and personal care product pollution. Toxicology experiments show that it has potential developmental toxicity and endocrine disrupting effects. However, there is little concern regarding galaxolide and heavy metals as emerging pollutants in medicine and cleaning industry pollution of soil. In this paper, the joint effect of galaxolide and cadmium on soil microbial community function was studied.

Results: Results showed that the carbon sources utilizing ability of soil microorganisms have been improved under galaxolide and its combination with cadmium. The utilization efficiency of esters was the highest in the six kinds of carbon sources, while it was lower for sugars and acids. Under the joint stress of 500 and 1000 mg•kg-1 galaxolide and cadmium, the Shannon index was significantly increased by 14.04% and 11.51% (p<0.05), the Simpson index was 54.64% and 41.49% (p<0.05), the McIntosh index was 224.12% and 179.51% (p<0.05), respectively.

Conclusions: The utilization of carbohydrate, esters, alcohols and carboxylic acids, as well as species richness and dominant population, were significantly promoted under the joint stress of 500 mg•kg-1 galaxolide and cadmium (p<0.05). The homogeneity of the population was broken after galaxolide addition.

Synthetic musk is widely used in pharmaceutical, cosmetics, and personal care products as an additive [1]. Toxicology experiments show that it has potential developmental effects on toxicity and endocrine disrupting [2]. Synthetic musk is able to be accumulated in the body tissue, appear in breast milk, and through the placental barrier to enter the embryo or fetus body [3]. It found that Synthetic musk can also increase the sensitivity of carcinogens and lead to testicular atrophy in animal experiments [4]. Galaxolide (HHCB) is one of the typical synthetic musk. As a new type of pollutants, it has become an important part of the drug and Personal Care Category of Pollutants (PPCPs). Its existence, distribution, migration, transformation and potential toxic effects in the environment have been received more and more concerns by researchers [5,6].

Soil is not only an important part of the ecological environment, but also the main receptor of the complex pollution of many environmental pollutants. The research on soil compound pollution has become one of the hot spots in the field of environment [7,8]. The Galaxolide (HHCB) and Cadmium (Cd) in soil were derived from sewage irrigation and sludge utilization, thus causing the combined pollution. The Combination of HHCB and Cd can enhance the toxicity of single pollution to animals and plants [6,9]. Therefore, it has become a new potential hazard in the environment. Microorganism is an important component of soil ecosystem, which plays a key role in the process of organic matter decomposition, nutrient cycling and plant nutrient utilization [10]. The differences in the utilization of various carbon sources in Biolog micro plate by soil microbes were responded to the differences of microbial community metabolism in soil. The method has been widely used to evaluate the diversity of soil microbial metabolism caused by pollutants [11,12]. At present, there is no report about the research on the microbial functional diversity of HHCB and Cd contaminated soil using Biolog method. In this work, Joint effects of HHCB and Cd on soil microbial community function were studied using Biolog at community level. The paper provides basic data and theoretical basis for establishing the ecological toxicity diagnosis index, risk assessment and restoration criteria.

Brown soil was collected from the surface layer (0-20 cm) of farmland (42º08.606’ N, 123º20.712’ E) in Shenyang City, Liaoning Province in the Northeast of China, which was permitted by the Shenyang Environmental Protection Bureau of China. After transferring samples to our lab, the fresh soil was sieved through a 2 mm mesh, stored at 4°C refrigerator. The general physicochemical properties of the soil and its background concentrations of Cd and HHCB are listed in Table 1.

Table 1. Physical and chemical properties of the soil before experiment.

Soil culture experiments: Each soil microcosm was carried out by the cultivation of two 200 g of the collected soil (spiked with different concentrations of Cd and HHCB). The HHCB stock solution was diluted with acetone to a concentration of 20 g•L-1 to facilitate solubilization in the aqueous system. A given amount of the stock solution of HHCB or CdCl2 was transferred into the soil, stirred, and mixed thoroughly. The mixed soil was put into a fume cupboard until the acetone completely volatilized. The soil samples were then covered with aluminium foil and incubated in a glasshouse for 4 weeks at 25 ± 2°C. During the incubation period, the soil moisture contents of the samples were periodically monitored by weighing and were adjusted to 60% of the WHC by adding sterile water. Samples from each soil microcosm were collected at 4 weeks for the subsequent testing. The final nominal concentrations of Cd and HHCB were 0 or 10 and 0, 100, 500 or 1000 mg•kg-1 dry weight soil, respectively. A control microcosm was also prepared without the addition of HHCB or Cd. Each treatment contained three replicates to minimize experimental errors.

Biolog analyses: Briefly, 5 g of fresh soil was suspended in 45 ml sterile saline solution (0.145 mol•L-1) on a rotary shaker at 180 r•min-1 for 30 min at 25°C. Suspensions were left to settle for 10 min before diluting. Ten-fold serial dilutions were prepared with 0.145 mol•L-1 of sterile saline solution. The 10-3 dilution was used to inoculate the Biolog Eco microplates with 150 μL of the diluted solution added to each well of a Biolog Eco plate. The plates were then sealed and incubated at 28°C in the dark for 10 days, and the absorbance at 590 nm was measured every 24 h. The absorbance of each well was read using an automated Biolog Microplate Reader (Biolog Inc.) at a wavelength of 590 nm (A590). And the data were collected using Microlog 4.01 software (Biolog Inc.). The readings at 72 h of incubation were used for subsequent the analysis of index and carbon source.

Average Well Color Development (AWCD) of substrate utilization at A590 was calculated as the average OD across all wells per plate using AWCD.

Three types of index computation formula are as follows [13]:

Where ni represents the relative optical density of the ith well which was corrected by color development in the control well (water only).

Where pi is the ratio of individual carbon source utilization against the sum utilization.

The data from the interaction between HHCB and Cd was analysed by a two-way ANOVA with SPSS 20.0 software for Windows. All values were mean ± SD of three replicates. Data in the same column followed by different letters were significantly different (P<0.05). The experimental figures were plotted by Origin 8.

Average Well Color Development (AWCD) is an important indicator to reflect the metabolic activity of soil microbes. The carbon source utilization of microbial biomass can be characterized by the AWCD value [14]. The AWCD variation of soil microbial community under the stress of HHCB and Cd are shown in Figure 1. 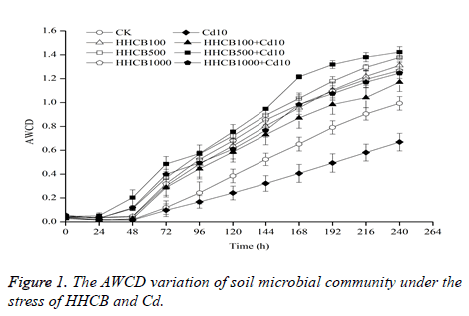 Figure 1: The AWCD variation of soil microbial community under the stress of HHCB and Cd.

All values are mean ± SD of three replicates. Data in the same column followed by different letters are significantly different (P<0.05). The same below.

The effect on McIntosh homogeneity index: The McIntosh diversity index is based on the diversity index of Euclidian distance in the soil microbial community. As shown in Table 2, the McIntosh index was significantly higher than the blank control 224.12% and 179.51% under the joint stress of 500 and 1000 mg•kg-1 HHCB and Cd (p<0.05). The McIntosh index was significantly increased and the homogeneity of the population was broken after HHCB addition.

Table 3. Utilization of carbon substrates by soil microbial community under the stress of HHCB and Cd.

The Shannon, Simpson and McIntosh indices were significantly promoted under the joint stress of 500 and 1000 mg•kg-1 HHCB and Cd. It indicated that the species richness and the dominant population were significantly promoted in the compound contaminated soil, and the homogeneity of the population was broken after HHCB addition. This phenomenon may be due to the improvement of the microbial metabolic function of compound contaminated soil and the species of carbon source utilization by HHCB. Also, some bacteria can promote its own growth and reproduction rate using a single carbon source. The characterization bacteria, which can make full use of a single carbon source, may become the dominant population and destroy the population uniformity of the soil. The other possibility is that the degradation of HHCB in soil, the biodegradation of HHCB has been supported and confirmed by many studies [18,19]. Sikkema [20] and his team worker has put forward the toxic effect of anesthesia hypothesis. They thought that the fat-soluble compounds would combine with fat-soluble molecules on the bacteria cell membrane, thus affecting the membrane structure and penetrating. In the same way, HHCB is a fat-soluble compound. It may also change the permeability of cell membrane, which makes it easier for Cd to get into the microbial cells, and improve the microbial toxicity of Cd. There were some other people who thought that Cd has inhibitory effect on soil microbial activity, it may decline the number and activity of microorganisms in soil, leading to the inhibition of microbial biodegradation, resulting in longer retention time of HHCB in soil [21]. Chen [22] has reported that HHCB can improve other toxic effects by disrupting cellular defense system and produce inhibitory effect of xenobiotic system for a long time, leading to the reducing of the cell's ability to resist exogenous chemicals and resulting in amplification of the toxic effects of exogenous chemicals. The existence of HHCB can promote the activity of these microorganisms and it leads to the increase of the carbon sources utilization and the three indexes.

The utilization efficiency of esters was the highest, while sugars and acids have lower utilization efficiency compared with others 6 kinds of carbon sources. A previous study reported that carbohydrates were the carbon source most strongly utilized by soil microbes under the stress of the veterinary antibiotic oxytetracycline [23]. This discrepancy may be attributed to the different chemical characteristics and compositions of HHCB and oxytetracycline. On the other hand, the mechanism of combined toxicity of compound pollution is obviously different from that of single pollution.

The ability of utilizing carbon sources in soil microorganisms has improved under HHCB and its combination with Cd. The utilization efficiency of esters was the highest, while sugars and acids have lower utilization efficiency compared with other 6 kinds of carbon sources. The utilization of carbohydrate, esters, alcohols and carboxylic acids were significantly promoted under the joint stress of 500 mg•kg-1 HHCB and Cd (p<0.05).

We gratefully acknowledged financial supports provided by the National Natural Science Foundation of China (Grantor. 21277150 and 31370523).