Background: Human Fibroblast Activation Protein (FAP) is a surface glycoprotein expressed on cancer associated fibroblasts in the majority of epithelial cancers. Tumor promoting effects of FAP expression was reported in several cancers. However, in gastric cancer, its clinical significance is unclear.

We collected 112 archived Formalin-Fixed, Paraffin-Embedded (FFPE) gastric cancer tumor tissues of the patients diagnosed at our hospital during December 2010 to 2014. Meanwhile, tumor adjacent normal gastric tissues were collected as well. The study was approved by the local Ethical Committee. All the included patients had signed the informed consent of this study. The clinicopathological features of each patient were obtained from the archived medical record. The TNM classification was performed according to the 7th Edition AJCC Cancer Staging Manual.

We measured the expression of FAP on the FFPE slides of the gastric cancer patients by Immunohistochemistry (IHC). Sample sections were de-paraffinized in xylene and then rehydrated with decreased concentrations of ethanol. Slides were then washed with 1x PBS for 5 min. To block the endogenous peroxides, slides were submerged in 3% H2O2 methanol for 10 min. Antigen retrieve was performed by heating the sections with Reveal Decloaker (Biocare Medical, CA, USA) in the microwave for 15 min. Slides were then permeabilized by 0.1% Triton X-100 PBS-T Buffer for 20 min. Primary anti-FAP antibody (1:100 dilution, Abcam, USA) was added to incubate at 4°C overnight. On the second day, HRP conjugated secondary antibody (1:1000 dilution, Abcam, USA) was added to incubate for 1 h at room temperature. DAB was used as the chromogenic reagent. Each slide was evaluated by two researchers independently and blindly to the clinical information. The FAP positive area of each slide was estimated.

The statistical analysis was performed with SPSS 17.0 (IBM, USA) and GraphPad Prism 7 software. The association between FAP expression and clinicopathological features was analyzed via Chi-square analysis. To analyze the prognostic value of FAP expression, we conducted Cox’s proportional hazard model analyses. Survival curves were plotted by Kaplan Meier method.

Patients who survived through the endpoint of follow-up or got lost from the follow-up were considered as censored cases in the survival curves. ROC curve analysis was performed to determine the cut-off point of FAP expression. The point with highest sum of sensitivity and specificity regarding to the OS of patients was chosen as the cut-off point.

Difference of means was tested by t-test. Two-tailed P values of all the statistical analysis less than 0.05 was considered as statistically significant.

We collected a total number of 112 gastric cancer patient’s tumor tissue and the corresponding adjacent normal tissue to evaluate FAP expression. The basic information of included patients was shown in Table 1. Briefly, the average age of these patients was sixty-four, with 31.25% females and 68.75% males. All of the collected tumors were adenocarcinoma. Around half of these patients were at advanced TNM stage (III or IV stage) at diagnosis. FAP expression was evaluated via IHC method on FFPE tissue samples. The FAP positive signal was predominantly detected in the fibroblastic cells, but not in the gland cells. As shown in Figure 1, tumor adjacent normal gastric tissues had minimal amount of FAP positive cells (Figure 1A). Whereas, in cancer samples, a large amount of FAP positive cells were detected (Figures 2A-2C). Based on positive area, we assigned an expression score for each case: 1 (less than 25% positive), 2 (25%-50% positive), and 3 (more than 50% positive). 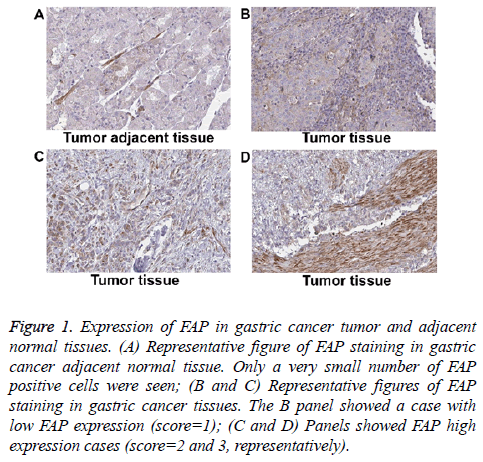 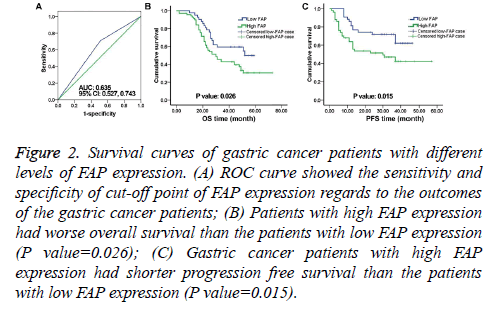 Determination of cut-off point of FAP high and low expression

The prognostic value of FAP expression in gastric cancer patients

Aiming to further explore the role of FAP expression in gastric cancer development, we evaluated its prognostic value by analyzing the archived follow-up data.

In the multivariate HR analysis (Table 3), high FAP expression was identified as an independent adverse prognosticator of the gastric cancer patients with a HR of 2.257 (95% CI: 1.154-4.413).

The tumor stroma consists of various non-malignant cells, including endothelial cells, fibroblasts, immune cells, and so on [1,2]. Co-evolution and “reprogramming” of the stromal compartments are necessary for human cancer development [1,2]. Among the stromal cells, CAFs make up the major cell types, and reactive CAFs frequently accumulate in gastric cancer tissues [1,2]. FAP was known to be expressed in the reactive CAFs and predicted adverse prognosis in various cancers, such as colon cancer and pancreatic cancer [8,9]. However, its role in gastric cancer is unclear. In the present study, we investigated the clinical significance of FAP expression in gastric cancer patients and highlighted the potential tumor promoting effects of FAP in gastric cancer.

It was widely accepted that cancer progression depends on dysregulation of protein expression, i.e. upregulation of tumor promoting proteins and down-regulation of tumor suppressing proteins. Via comparing the gastric tumor tissues and adjacent normal gastric tissues, we noticed that FAP was up-regulated in most gastric cancer patients, suggesting that FAP might be a tumor promoting factor in gastric cancer. Meanwhile, we analyzed the correlation between FAP expression and clinicopathological parameters of gastric cancer. Importantly, we found that high expression of FAP was correlated with primary tumor invasion and TNM stage. These data were in line with the previous study, which indicated that FAP significantly enhanced invasion and migration of gastric cancer cells [13].

Proteins expressed in tumor stromal cells have shown critical values in predicting cancer patient’s survival. In breast cancer and gastric cancer, down-regulation of caveolins-1 expression in CAFs, but not in tumor cells, was correlated with poor survival [12,14]. In our study, we observed that FAP was predominantly expressed in the CAFs of gastric cancer tissue. Clinically, patients with high FAP expression showed shorter survival time than patients with low FAP expression. In the HR analyses, FAP expression was identified as the independent prognosticator of OS and PFS. A recent study also investigates the expression and clinical significance of FAP in gastric cancer patients by analyzing The Cancer Genome Atlas [15]. Mengmou et al. found that the highest FAP-α expression was observed in the poorly differentiated gastric cancer and elevated FAP-α expression correlated with adverse clinicalpathological characteristics and poor survival [15]. Meanwhile, FAP-α upregulation was associated with activation of tumor progression related pathways. Our major results were in line with the previous study. Also, our study provided a protein level validation of Mengmou’s report, further confirming the tumor promoting effects and clinical significance of FAP expression in gastric cancer.

To validate our findings, a prospective study is highly recommended regarding the clinical significance of measuring FAP expression in gastric cancer patients.