Methodology: Sorghum seeds were germinated in growth chamber (under lab cold condition) at a constant 12°C for five weeks. After two weeks, germinated seeds and germination rates were counted and calculated at weekly intervals for four times. The same seed lots for lab cold test were also planted 45 days earlier than the normal planting time in the field (early-spring cold planting). In addition to seedling dry weight, germinated seeds and seed germination rates were also counted and calculated at weekly intervals for three times.

Conclusion: Compared with the field test, the lab test is less labor intensive. For a large-scale screening of seedling cold tolerance, the lab test may be conducted initially followed by selection of superior accessions from the lab test for further evaluation under field conditions.

Early planting (or early sowing) may increase yield of sugar, grain or biomass; but it depends on many factors (e.g. rainfall, soil types and temperatures, cultivars, and crops). For example, early planting soybean in southwestern Japan can increase grain yield [1]. But planting peanut in early to mid-April instead of early to mid-May in the state of Georgia can increase the risk of tomato spotted wilt virus (TSWV) incidence [2] and lead to yield reduction. Sorghum seeds can be planted in early April for achieving a higher yield or earlier harvesting time for a double-cropping system in Texas, but selection of cultivars with early spring cold tolerance is important. Sorghum cultivars with early spring cold tolerance have several obvious advantages: faster and better seedling emergence and establishment, an extended growing season in the same region, and slightly expanded planting zones from the south to north regions [3]. Significant seedling cold tolerance exists in sorghum. Several studies have been conducted on seedling cold tolerance in grain sorghum [3,4]. Three SSR markers for different QTL for early-season cold tolerance have been identified, and they are mapped in different chromosome regions [5-7]. However, little research has been conducted on cold tolerance in sweet sorghum. The U.S. sweet sorghum collection is maintained by the Plant Genetic Resources Conservation Unit (PGRCU) at Griffin, GA. These sweet sorghum accessions are used as experimental materials for screening seedling early-spring cold tolerance under both lab and field conditions. Therefore, the objectives of this study were to (i) determine the germination rates of sweet sorghum accessions under cold conditions in both lab and field; (ii) determine the correlation coefficients among investigated traits; (iii) determine the correlation coefficients of germination rates between lab and field conditions; and (iv) identify accessions with cold tolerance under both lab and field conditions and recommend them to sweet sorghum breeders as parental materials for developing new cultivars.

Table 1. Information on PI number and identifier for the selected sweet sorghum accessions.

Lab cold germination test: The growth chamber (Percival Scientific, Inc., model GR36L) was set at a constant 12°C and 60% humidity with eight hours of light and 16 hours of dark.

Seeds were treated with thiram before testing. Fifty seeds were evenly spread out onto a double layer of wetted germination paper towels, wrapped up, and bound in place with a rubber band. The bound paper towels were then transferred standing upright into a lattice plastic tray (to allow air circulation around towels) and placed in the growth chamber. Whenever the paper towels needed to be rewetted, 12°C water was used from a carboy stored within the same growth chamber. High humidity (~60%) was maintained by keeping an open plastic basin containing clean tap water at the bottom of the growth chamber at all times. After two weeks, the wrapped paper towels were opened on a clean table to count germinated seeds, which were removed from the towels. Seeds not yet germinated were then wrapped up again and put back into the growth chamber for further germination. Following the same procedure, seeds were recounted at weekly intervals three more times. Germination rates for each accession were calculated cumulatively for each counting time.

Field early-spring planting evaluation: Normal planting time for sorghum in Lubbock, TX is around May 15th, but the planting time for early-spring cold tolerance test in this study was April 1st (45 days earlier than the normal planting time). The same seed lots for the growth chamber test from 212 accessions were also used for the field planting evaluation. Twenty-five seeds were planted in a 6 x 1 meter row, and two replicates were planted for each accession. The seedling emergence was first counted fourteen days after planting. Seedling emergence was recounted at weekly intervals two more times. Similar to lab germination rates, the seed germination rates in the field were also calculated cumulatively.

Seedling dry weight and emergence index: At 28 days after counting, the above-ground seedling tissues from five seedlings for each accession were cut, harvested, and then were dried in an oven at 80°C for 72 hours. After drying, the seedling tissues were weighed and the dry weight recorded (g/5 seedlings). Emergence index (EI), a measurement of rate of emergence, was calculated using the following formula: EI=Σ (Ej x Dj)/E where Ej=emergence on day j, Dj=days after planting, and E=final stand. The final stand counts were taken at 28 days and 35 days for field test and lab test, respectively [8]. 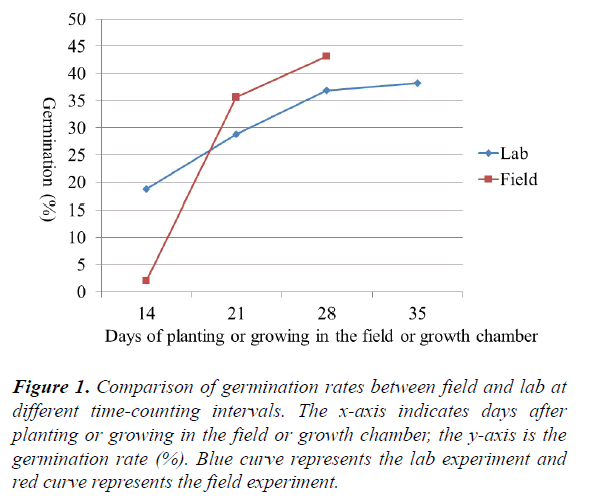 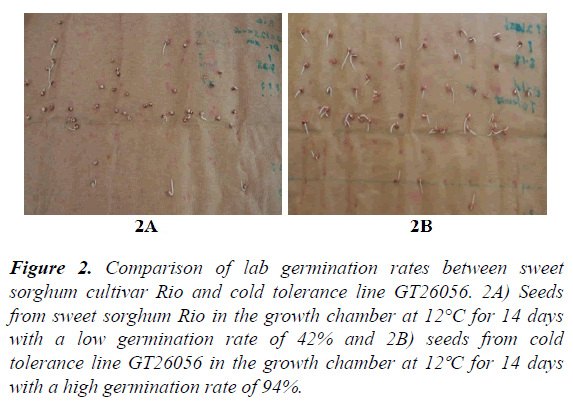 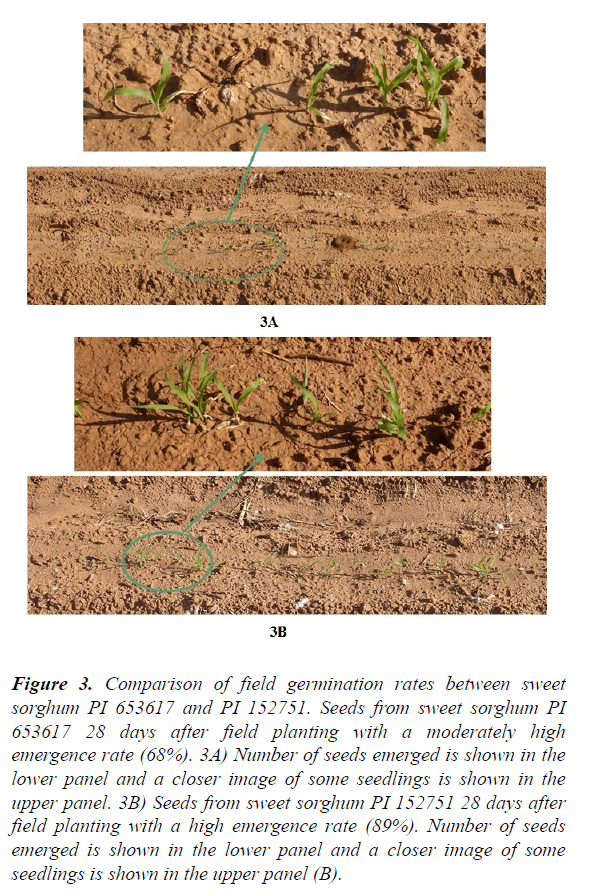 Table 4. Difference in seed germination rates between field and lab from some selected accessions.

Unique germplasm accessions identified: Besides the four checks (Rio, BTx623, GT26056, and PI 610727) which had high germination rates under the field cold conditions, three other accessions (PI 146890, PI 653617, and PI 195754) were identified with high field germination rates of 92%, 82%, and 80%, respectively. These three accessions also had lower emergence indexes (EI) (18.29, 17.63, and 18.52 respectively) than the average EI (19.45). The lower the EI value is, the earlier the seeds germinate. This means that these three accessions not only had high germination rates but also had earlier emergence. Compared with other accessions, the seedlings from these three accessions could establish more robustly than other lines within the same time window. For seedling dry weight, PI 146890 and PI 653617 averaged 0.838 g and 0.826 g, respectively, which is similar to the average (0.72 g). PI 195754, however, was 1.363 g, significantly higher than the average. Seedling dry weight (obtained from the early spring planting) may be an important indicator for early spring cold tolerance. PI 195754 was originally curated in China (GRIN database). The Chinese sorghum germplasm collection is known to contain accessions with good tolerance to early spring cold temperature [9-11].

The authors have declared that no competing interest exists.

This study discovered the relationship between lab cold germination test and field seedling cold tolerance performance that can be beneficial for sweet sorghum breeders. This study will help sweet sorghum breeders to select parents from the unique accessions to make crosses for developing new cultivars in their breeding programs.

The authors would like to thank Mr. Jerry Davis from the Department of Statistics, University of Georgia for his excellent assistance in statistical analysis.