Results: Thirty-one eyes from 40 patients were randomized. Through 52 weeks, endophthalmitis, progression of traction retinal detachment, iris/angle neovascularization and neovascular glaucoma were not observed. The q8week and q16week groups received an average of 8.4 and 5.4 injections, respectively, through 52 weeks. Adverse events at any time through 52 weeks such as worsened visual acuity>30 letters (6 eyes), new rhegmatogenous retinal detachment (1 eye), and recurrent VH (4 eyes) occurred infrequently and were more common in the q16week group. Preoperative average visual acuity (VA) was 37 letters (20/200) for randomized eyes. Endolaserless vitrectomy resulted in statistically significant 52-week visual acuity 33 letter gain to 72 letters (20/40). Visual acuity outcomes favored (not statistically significant) the q8week group where average acuity was 77 letters (20/32) with a 52-week 40 letter gain versus 66 letters (20/50) with a 52-week 24 letter gain in the q16week group.

DRCR Protocol S concluded that their findings supported either anti-VEGF therapy or PRP as viable PDR treatment [8]. The PROTEUS study showed that adding ranibizumab to PRP was more effective than PRP alone in regressing neovascularization in eyes with high-risk PDR [9]. The CLARITY trial further supports anti-VEGF aflibercept therapy in PDR eyes [7]. When PDR was present in eyes being treated for DME in DRCR Protocol T, aflibercept resulted in greater PDR regression rates compared to ranibizumab and Bevacizumab [6].

Given the above information, intravitreal aflibercept injection (IAI) may represent a useful therapy before, during, and after vitrectomy for PDR-related vitreous hemorrhage. We previously reported the short-term 4-month results with endolaserless vitrectomy and aflibercept for eyes with PRP-naïve PDR-related VH [11-13]. Herein, we report 52-week safety and efficacy results for our expanded cohort of 40 eyes.

This is a phase I/II, open-label, randomized, prospective, single center interventional study. Eligible subjects were identified and provided with a copy of informed consent. Informed consent documentation and relevant supporting information was submitted and approved by the Institutional Review Board (IRB)/Ethics Committee (EC).

Adult subjects with Type 1 or Type 2 diabetes mellitus and PDR-related VH requiring vitrectomy. Vitrectomy need was determined by a non-study, standard of care visit prior to the screening study visit. Exclusion criteria are listed in Table 1.

Only one eye per patient was eligible and was randomly assigned after vitrectomy with equal probability to either a q8week or q16week treatment group. Figure 1 presents the injection and randomization schedule.

PDR was monitored and assessed for progression by postoperative clinical exam and q12 week standard 7-field fundus photography and Optos wide-field fluorescein angiography/photography. If progression of PDR occurred at a visit where IAI was not mandatory, IAI was required at that visit and in 4 weeks. If regression of the progressed PDR was not evident after 2 consecutive monthly IAI, then PRP could be administered. Criteria for PDR progression and regression are summarized in Table 2.

Eyes with clinical and optical coherent tomography (OCT) DME in the q8week group were to receive appropriate IAI per label as part of the mandatory schedule through 16 weeks. Starting at week 12 and week 20 in the q16 and q8week groups, respectively, eyes were eligible to receive additional 2mg IAI (monthly) for the treatment of DME (Table 3).

Visual field outcomes were evaluated by the mean cumulative score and change for the combined 30-2 and 60-4 Humphrey visual field (HVF) decibel thresholds from week 4 to week 52. 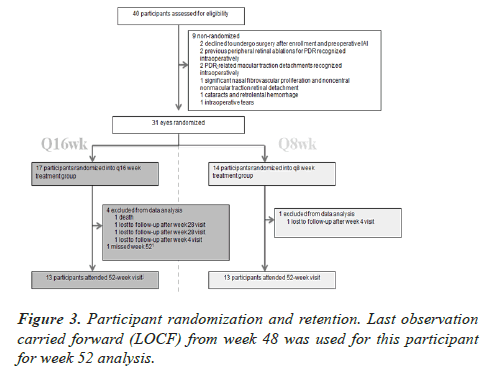 Figure 3: Participant randomization and retention. Last observation carried forward (LOCF) from week 48 was used for this participant for week 52 analysis.

Table 6. Baseline Demographics for 31 randomized eyes. One subject declined vitrectomy after enrollment and receipt of pre-operative IAI. This subject continues follow-up for safety as a nonrandomized eye. One subject was unable to undergo vitrectomy after enrollment and receipt of pre-operative IAI due to accelerated hypertension at time of surgery. This subject has been lost to follow-up since the decision to not undergo surgery. Thirty-eight of 40 enrolled eyes underwent vitrectomy surgery. Seven of those 39 eyes were not randomized due to intraoperative evidence of previous peripheral retinal ablation (2 eyes), traction retinal detachment involving the macula (2 eyes), significant nasal fibrovascular proliferation and noncentral nonmacular traction retinal detachment (1 eye), cataracts and retrolental hemorrhage (1 eye), and intraoperative tears (1 eye). These seven non-randomized eyes received intraoperative endolaser and did not receive intraoperative IAI and continue follow-up for safety as nonrandomized eyes. 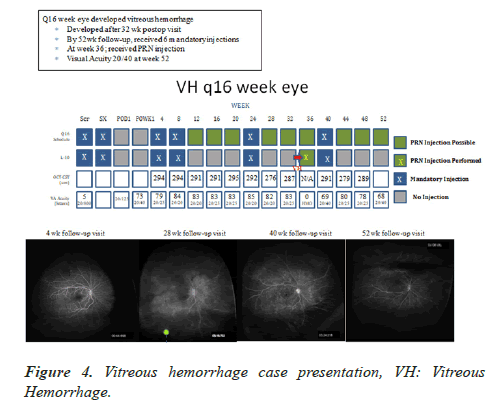 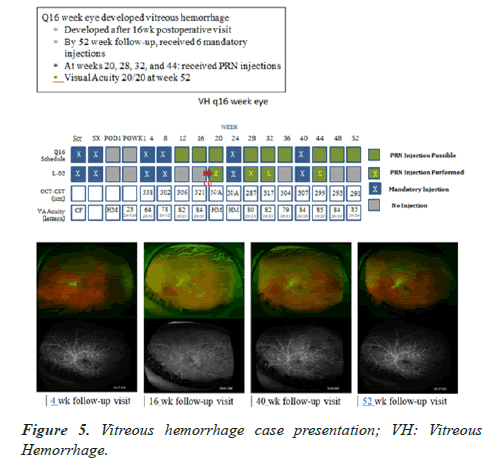 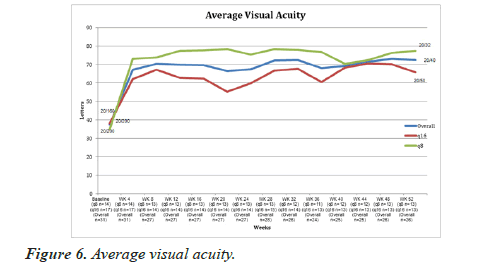 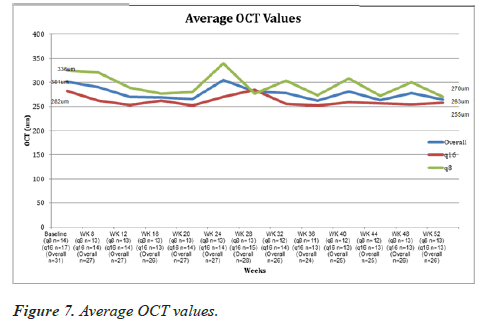 Sample size for HVF score analysis was a limitation in our analysis. Also, due to equipment malfunction, not all patients were able to undergo visual field testing at their week 52 visit (Table 14). Baseline mean total HVF point score combining 30-2 and 60-4 was 2573 dB [SD, 658 dB] at week 4 for 28 randomized eyes. For the 21 total randomized eyes from both groups with both baseline and 52-week HVF testing, average total score was 2269 dB [SD, 649 dB] at week 52 with an average change of -440 dB (p<0.007; one tailed t-test). Additional secondary treatment outcomes are summarized in Table 15. 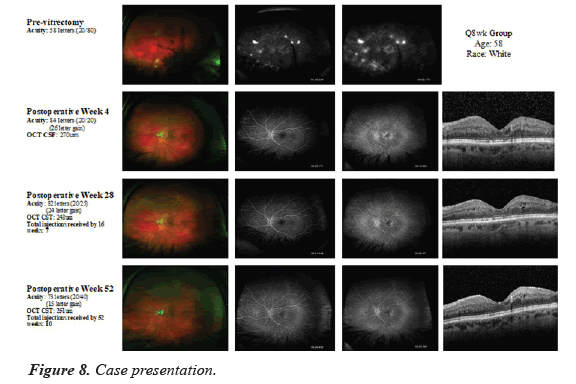 Our 1-year results indicate safety, moderate-term durability, and significant VA improvement after endolaserless vitrectomy with aflibercept for PDR-related VH. Through 52 weeks, endophthalmitis, progression of traction retinal detachment, iris/ angle neovascularization, and neovascular glaucoma were not observed. Adverse events at any time through 52 weeks occurred infrequently and were more common in the q16week group. VA improved soon after surgery with a 52-week letter gain of 33 letters. VA loss at week 52 occurred in 5 eyes (3 from DME recurrence, 0 from proliferative consequences, and 2 of unclear etiology).

Our 1-year endolaserless PPV VA results are consistent with previous one year results from the DRIVE-UK study which retrospectively evaluated vitrectomy with endolaser for a nonclearing VH subgroup of 60 eyes (excluding traction retinal detachment) [14]. Other retrospective studies of vitrectomy with endolaser for PDR-related VH (without traction) yield no better visual outcomes than our results [14-17]. Aflibercept with endolaserless vitrectomy safety and efficacy results appear comparable to using endolaser while avoiding vitrectomy for the 3 q16week eyes and 1 q8week eye with recurrent vitreous hemorrhage by administering pro re nata (PRN) aflibercept and presumably reducing other endolaser PRP side-effects such as DME exacerbation or visual field compromise. Our visual field results are limited due to small numbers but indicate some overall visual field loss (statistically significant). Given the DRCR Protocol S finding of reduced visual field scores from years 2 to 5 in the ranibizumab group [8], planned longer-term evaluation is necessary in our cohort to document our long-term visual field outcomes. We also demonstrated macular thinning in both groups and a low incidence of OCT>300 um at 52 weeks. While much of our visual gain is likely due to clearance of vitreous hemorrhage by PPV alone, aflibercept-related macular thinning may result in greater acuity gains observed in the q8week group.

Post-operative wide-field fluorescein angiography, employed in our approach, is a key component for neovascularization monitoring. After endolaserless PPV, PDR progression at any time through 52 weeks, was observed in 21% and 29% of q8week and q16week eyes, respectively, despite mandatory aflibercept injections. Interestingly, absence of neovascularization at 52 weeks was found in 71% of q8week eyes but in only 35% of q16week eyes. These findings speak to the issue that while anti- VEGF therapy can cause regression of neovascularization, it is likely that neovascularization will recur without some form of maintenance anti-VEGF. While it has been proposed that PRP may be a more durable treatment for PDR and neovascularization than anti-VEGF therapy, results from our major PDR trials for eyes not requiring vitrectomy have not borne this out. Through 1 year, 65% and 6% of CLARITY study PRP eyes required additional PRP and vitrectomy, respectively [14]. Through 5 years, 54% and 22% of DRCR Protocol S PRP eyes developed vitreous hemorrhage and need for vitrectomy, respectively [8]. The above trials monitored neovascularization via clinical examination and did not monitor with wide-field or standard fluorescein angiography, which may account for potential undertreatment and relatively high rates of vitreous hemorrhage. The DRCR Protocol S required at least 1200 spots of laser in the PRP group which is significantly less than the 1600 spot requirement established by the DRS and ETDRS trials decades ago. Thus, under-treatment with PRP is another possible cause for relatively high rates of proliferative consequences in our more recent PDR trials. This may also limit the support for advocates of a “lighter endolaser PRP” during PPV. In the PROTEUS study, which evaluated PDR eyes with high-risk characteristics not requiring vitrectomy, complete neovascularization regression was observed in 44% in eyes receiving both PRP and ranibizumab versus only 25% in the PRP monotherapy group [9]. Thus far, evidence does not support the notion that adding endolaser to aflibercept or endolaser alone would necessarily provide improved longterm durability or safety for PDR eyes requiring vitrectomy for vitreous hemorrhage. It is also possible that removal of the vitreous scaffold may be somewhat protective for proliferative consequences even without administering endolaser PRP.

Nevertheless, there understandably remains reticence for adopting endolaserless PPV especially for more advanced PDR. Aflibercept demonstrates superior outcomes to other anti-VEGF agents for DME eyes with worse VA and for regression of PDR [1,2,6]. In DRCR Protocol S, eyes with greater baseline severity of PDR demonstrated better visual outcomes with ranibizumab than PRP [18]. These data may reduce concerns for omitting endolaser for more severe PDR. Given the absence of any other anti-VEGF agent use for this endolaserless approach, it remains unclear whether aflibercept is the optimal agent. Concerns are escalated especially for patients at risk for non-compliance with follow-up visits[19] even within a structured clinical trial, such as DRCR Protocol S, only 66% of patients completed the 5-year visit [8]. Our 1-year noncompliance rates are equally concerning. One initially non-compliant patient returned later without visual compromise or complications. Longer-term follow-up of compliant and non-compliant endolaserless patients may help determine critical outcomes after poor adherence to visits. It is also concerning that half of our nonrandomized patients were noncompliant after undergoing PPV with endolaser. In addition to compliance concerns, cost, systemic health, and frequency of visits remain a consideration when choosing a treatment approach [8].

The strengths of our study include the prospective nature, use of ETDRS BCVA, modest but significant number randomized, two clinically relevant dosing regimens, visual field assessment, protocol specific PRN dosing criteria based on clinical, OCT, fundus photographic, and, importantly, wide-field fluorescein angiographic analyses. In addition, our inclusion criteria required that vitrectomy was indicated and planned prior to enrollment. Baseline acuities were wide ranged and our population is likely representative of real-world eyes.

The limitations of our study include a modest number and only 1-year data. Our study received approval to include 40 eyes with 3 years duration. This will address the ultimate safety of both dosing regimens and compliance rates. Other limitations include an absence of a control group such as standard or limited or “lighter” peripheral endolaser PRP, PRN dosing, or comparison to other anti-VEGF agents. Our randomized eyes with “simple” vitreous hemorrhage and exclusion of traction macular detachment may have a favorable prognosis with other therapies. Our study intends to evaluate safety and potential efficacy of this new surgical approach and is not intended in a smaller pilot study to make comparisons to vitrectomy with endolaser, observation, anti-VEGF injections without surgery etc.

Our favorable results do not necessarily support widespread adaptation of endolaserless vitrectomy. Additional study follow- up and widening experience will determine the continued balance and contemplation between anti-VEGF therapy and endolaser PRP [12].

Siobhan Ortiz, Thomas Bailey, and Ken Ivey at Southeast Retina Center, provided technical and data support. Dr. Dennis Marcus has full access to all the data in the study and takes responsibility for the integrity of the data and the accuracy of the data analysis.

Regeneron Pharmaceuticals Inc. was responsible for manufacturing and supplying the drug used in the study. The investigator-initiated study received clinical research grant support from Regeneron to conduct the trial. The sponsor was Southeast Retina Center and Dr. Marcus was responsible for the design of the study, conducting the study, data collection, data management, data analysis, interpretation of the data, preparation, and approval of the manuscript. Regeneron, the funding organization, reviewed the manuscript prior to submission. 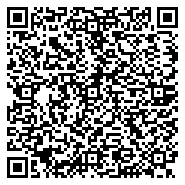