Citation: Sharma J, Deb B, Kumar P. Developments in the area of bladder cancer genomics and its importance in the treatment selection. J Mol Oncol Res. 2018;2(3):58-62.

With the advent of next-generation sequencing technologies, tremendous progress has been made in the understanding of the genomic landscape of several tumor types. Clinicopathologically bladder carcinoma is classified into non-muscle invasive bladder cancer and muscle invasive bladder cancer. Patients are often diagnosed with bladder carcinoma at an advanced stage, owing to a lack of early clinical symptoms and effective biomarkers for early detection. Failure of chemoradiotherapy at an advanced stage usually results in a poor outcome. Currently, there are limited targeted therapies available for bladder carcinoma. Thus, there is an immediate need to identify alternative strategies and novel therapeutic targets for the treatment of bladder carcinoma. The genomic underpinnings of bladder carcinoma may lead to the better understanding of this disease and improved targeted therapy. A large number of genomic alterations including somatic mutations, copy number alterations and fusion genes were identified to be involved in the pathogenesis of bladder carcinoma. A high mutational burden was observed in bladder carcinoma as compared to other tumors. Recurrent somatic mutations in genes such as TP53, KMT2D, RB1, FGFR3, KDM6A, STAG2 and PIK3CA were identified. Multiple signaling pathways such as the cell cycle pathway, DNA repair pathway, chromatin remodeling and histone modifications were found to be altered. Most likely, targeting mutated genes of these altered pathways could provide opportunities for personalization of bladder carcinoma therapy. This review discusses the molecular alterations, altered identified genes and the molecular pathways involved in bladder carcinoma.

Bladder carcinoma is one of the most common malignancies of the urinary system with a high mutational load as compared to other solid tumors [1]. At diagnosis, the majority of bladder carcinoma cases (75%-80%) are non-muscle invasive bladder cancer (NMIBC) (Ta, non invasive papillary carcinoma; T1, tumor invades subepithelial connective tissue) [2] and 20%-25% of cases present as muscle invasive bladder carcinoma (MIBC) (T2-T4) [3,4]. NMIBC cases have a high recurrence rate (50%-70%) and moderate progression rate (10%-15%) [4]. NMIBC was initially suggested to arise from epithelial hyperplasia accounting for the loss of chromosome 9, which was considered an early event in tumorigenesis. Whereas, MIBCs were contemplated to be more genomically instable and arise mainly from dysplasia [5].

The current treatment regimens and interventions are mostly determined by the clinicopathological characteristics of the tumor. NMIBCs are generally treated with transurethral resection of bladder tumor (TURBT), by administration of Bacillus Calmette-Guerin (BCG) and intravesical chemotherapy [6]. The standard therapy for MIBC treatment is radical cystectomy (Figure 1). However, a perioperative mortality rate of 2.5%-5.2% exists [7,8]. In case of recurrence, patients are subjected to a numerous cystoscopic examinations. Thus, NMIBC is an expensive cancer to treat that place a huge demand on health care [9]. Systemic treatment for bladder carcinoma has been inadequate and limited to cisplatin-based chemotherapy with little progress over the past several decades. Furthermore, the development of multiple tumors in the same patient is conversant to the bladder carcinoma. A single clone may spread via intraepithelial migration to develop into more than one independent tumors [10-12]. This accounts for the intratumoral heterogeneity of these tumors and treatment becomes further challenging. 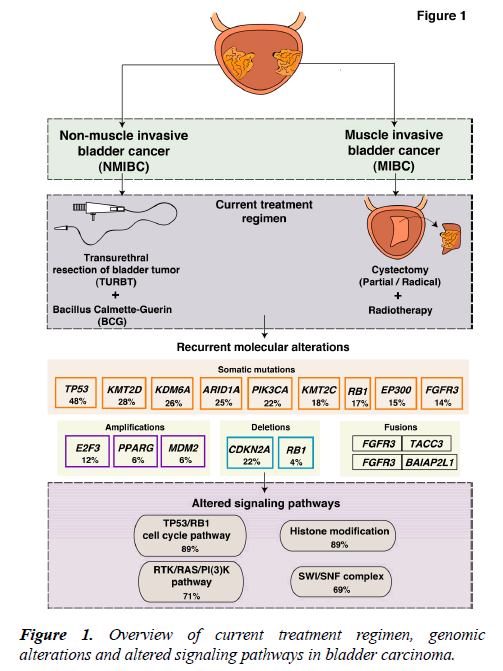 During the last decade, many research groups including the International Cancer Genome Consortium (ICGC), the Cancer Genome Atlas (TCGA), and the Chinese Cancer Genome Consortium (CCGC) conducted both large-scale and small-scale cancer genome studies worldwide. These studies identified molecular alterations including somatic mutations, copy number alterations and chromosomal rearrangements in various tumor types including bladder carcinoma. Bladder carcinoma has the third highest mutational frequency followed by lung cancer and melanoma [1]. Targeting common alterations in bladder carcinoma could result in novel trial design to determine the best therapy for patients. An overview of known molecular alterations in bladder carcinoma is shown in Figure 1. The targeted therapies approved by FDA for the treatment of bladder carcinoma are: Atezolizumab (Tecentriq™), nivolumab (Opdivo®), durvalumab (Imfinzi™), avelumab (Bavencio®), pembrolizumab (Keytruda®) (cancer.gov/about-cancer/treatment/types/targeted-therapies/ targeted-therapies-fact-sheet). Furthermore, longitudinal sequencing of matched primary and metastatic tissues from the same patients would strengthen the management of this disease. Recently, the introduction of immunotherapy in bladder carcinoma specifically the immune checkpoint inhibitors have been explored. Despite the successful introduction of various checkpoint inhibitors in bladder carcinoma, the objective response rate (ORR) lies within 46.4% ORR in programed death-ligand 1 (PD-L1) positive and between 0% and 26.2% ORR in PD-L1 negative patients [13-15]. Thus, most patients do not benefit from immunotherapy and hence the deeper understanding and detailed molecular characterization of bladder carcinoma is utmost needed.

Several studies from various research groups including the TCGA group [16,17] and others [18-26] have carried out whole-genome sequencing (WGS) and whole-exome sequencing (WES) of bladder tumor tissue samples. A large number of genes were found to be mutated from different studies (Figure 2). In 2014, the TCGA group analyzed 131 high-grade MIBC cases and thirty-two significantly mutated genes were identified [16]. Recently, the TCGA extended the study and analyzed 412 MIBC cases. Fifty-eight significantly mutated genes were identified including TP53 (48%), KMT2D (28%), KDM6A (26%), ARID1A (25%), PI3K3CA (22%), KMT2C (18%), RB1 (17%), EP300 (15%), FGFR3 (14%), STAG2 (14%) [17]. These genes are known to play an important role in various functions, such as cell cycle regulation (TP53, RB1, CDKN1A and CDKN2A), chromosomal segregation (STAG2), chromatin remodeling (KDM6A, ARID1A, EP300, MLL2, BRWD1 and MBD1), receptor tyrosine kinase activity (FGFR3, TYRO3, ERBB3, TGFBR1, ERBB2, ERBB4 and IRS4), and migration of cells (RHOB and RHOA). Overall, one or more cell-cycle genes were altered in 93% of the TCGA tumor samples, most often TP53 and CDKN2A [16]. Interestingly, some of these mutations are mutually exclusive: CDKN2A and TP53, CDKN2A and RB1, TP53 and MDM2 [17], suggesting that they have redundant downstream targets affecting the pathogenesis of bladder carcinoma. The amplified/deleted genes were found to be involved in various important cellular processes including proliferation, apoptosis and migration of cells. A study by Guo et al. reported frequent alteration in STAG2, ESPL1 and NIPBL genes which are known to be involved in sister chromatid cohesion and segregation (SCCS) [19]. In contrast to other cancers, bladder cancer is a unique cancer type with genetic lesions in genes involved in the SCCS process. Cohesion is also affected by inactivation of the tumor suppressor pathway by inactivating RB1. This inactivation leads to defects in the SCCS process that further causes segregation errors in mitosis resulting in chromosomal instability. Lamy et al. performed WES of tumors from 29 patients initially diagnosed with early stage bladder tumors (14 with non-progressive disease and 15 with progressive disease). Tumors from patients with progressive disease showed a higher variance of the intrapatient mutational spectrum and a higher frequency of APOBEC-related mutations [25]. It has been reported by Glaser et al., that the APOBEC family of enzymes are major contributors to mutations and development of hypermutation phenotypes in bladder carcinoma [27]. The TCGA group determined that the high mutational load was associated with APOBEC-signature mutagenesis [17]. 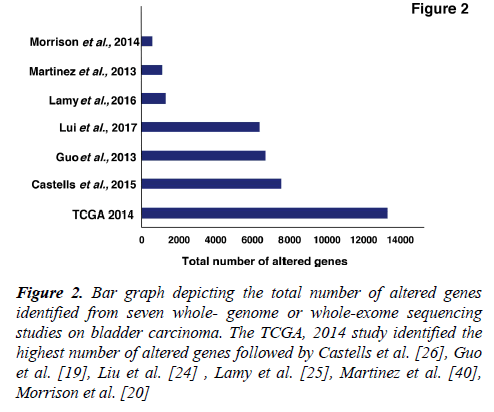 FGFR3 has long been implicated in bladder carcinoma. The mutations are known to affect kinase-activating sites and are amenable to therapeutic targeting [28]. A recurrent translocation FGFR3-TACC3 gene fusion on chromosome 4 (4p16.3) results in a constitutively activated FGFR3 receptor dimer. The breakpoints are located on exon 4 of TACC3 and on exon 18 of FGFR3 [29]. A total of nine FGFR3–TACC3 fusions and five FGFR3–BAIAP2L1 fusions were reported in bladder tumor cell lines and bladder tumors [30]. FGFR3 fusions were found to be extremely sensitive to FGFR-selective agents in the urothelial cell lines. The presence of a fusion gene(s) might aid in the selection of patients with bladder carcinoma for FGFR-targeted therapy [31]. A detailed list of frequently altered, amplified, deleted and fusion genes is provided in Table 1.

Accumulation of mutations result in acquired changes in the genome of patients with bladder carcinoma. These mutations have a major impact on the regulation of protein expression and function. The mutation frequency in NMIBC and MIBC overlap mutually. Large-scale genome-wide profiling poised to identify key signaling pathways altered in bladder carcinoma. These discovered pathways might be therapeutically targetable in the future. Thus, improving the prognosis of the bladder carcinoma patients. Frequent dysregulation of many key signaling pathways have been reported in bladder carcinoma by the TCGA group [16,17] (Figure 3). The cell cycle pathway is one of the major signaling pathway which has been reported to be altered in bladder carcinoma (Figure 3A). Inactivation of TP53, RB1 and CDKN2A was shown predominantly in MIBC [32,33]. CDKN1A, which is a cell cycle checkpoint regulating gene, is also found to harbor an inactivating mutation with a frequency of 11% [33]. TP53 and CDKN1A double loss of function mutants have been proposed to have enhanced sensitivity to CHK1 inhibitors where intervention with drugs such as Gemcitabine could result in better treatment [34]. Alterations in ERCC2 (9%) and ATM (14%) which were important DNA repair pathway intermediates and also observed to be altered in patients with bladder carcinoma. MDM2 amplification (6%) as well as overexpression (19%) has been observed in MIBC [17]. MDM2 is a direct transcriptional regulator of TP53 and it regulates an autoregulatory feedback loop. Moreover, MDM2 amplification and overexpression are reported to be mutually exclusive to TP53 mutations [17]. 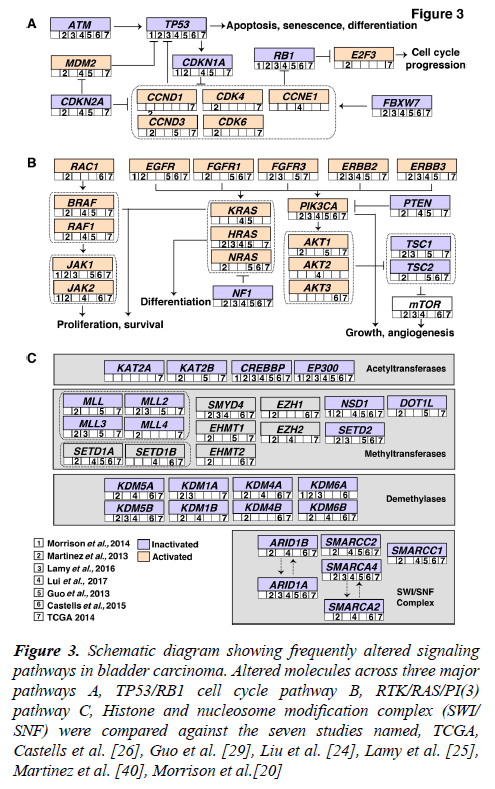 The RTK/RAS/PI(3) pathway has been frequently observed in MIBCs (71%) to affect cell growth and proliferation [17]. The RTKs, EGFR, ERBB2, ERBB3, FGFR1 and FGFR3 are usually activated in bladder carcinoma which also activates RTK/RAS signaling. RAS–RAF signaling cascade further leads to phosphorylation of several downstream substrates that are responsible for multiple cellular effects such as proliferation and survival. Role of HRAS, NRAS, or KRAS in the RAS-RAF-MAPK pathway has been proven to control proliferation, differentiation, and survival of eukaryotic cells (Figure 3B) [35]. Activated RAS contributes to several phenotypic aspects of the malignant cells in bladder carcinoma including angiogenesis, cell growth and invasiveness [36,37]. Activated RAS may also directly activate PI3K. PIP3 recruits PDK1 and AKT, resulting in activation of AKT as well [4]. AKT1 is predominantly expressed in bladder carcinoma followed by AKT2 and AKT3. AKT1 is robustly involved in tumorigenesis and invasion of bladder carcinoma cells and it is evident that the inhibition of AKT1 could lead to suppressive effects in patients with bladder carcinoma [38]. EGFR mutations have been targeted by Erlotinib and Afatinib, and currently undergoing clinical trials in bladder carcinoma [37]. Similarly, ERBB2 amplifications are targeted by Trastuzumab and Pertuzumab; KRAS and NRAS by Cetuximab [37].

Pathways regulating the histone modification and chromatin remodeling (Figure 3C) are also frequently altered in bladder carcinoma. 89% of MIBCs harbor a mutation in one or more chromatin-regulating genes [16]. Several genes of the chromatin remodeling pathway such as ARID1A (4.2%), CREBB (14.2%) and KDM6A (4.9%) were deleted in bladder carcinoma. Also, histone methyltransferases including KMT2A, KMT2C and KMT2D, histone acetylases (CREBBP, EP300, KANSL1), ARID1A (SWI/SNF chromatin remodeling complex intermediate) and polycomb group genes (ASXL1, ASXL2) were observed to be frequently mutated [17]. Chromatin remodeling genes were frequently mutated in bladder carcinoma and targeting these genes would be advantageous for chromatin abnormalities. Drugs targeting histone modifying enzymes have received a wider recognition since such agents could effectively restore the epigenetic state of the genome back to normalcy due to the reversible histone modifications. Inhibitors targeting histone acetyltransferases, histone methyltransferases, histone demethylases are also moving rapidly to the clinical practice [39].

Bladder carcinoma is heterogeneous with a high genomic complexity. The large-scale sequencing efforts revealed signatures and underlying mutational spectrum. However, it is requisite to sequence large number of samples from patients with both NMIBC and MIBC to establish a more detailed mutational profile. Also, clinical trials are obligatory to stratify patients before treatment. We have provided a deeper insight into the genomic landscape of bladder carcinoma. The dysregulated pathways may be useful for designing targeted therapy to select the most effective treatment options for the intensive management of this disease.