Correlations of zinc-fingers and homeoboxes 2 (ZHX2), p53, and survivin expression in a variety of malignant tumors

Malignant tumors are one of the greatest threats to human health, and their occurrence and development are governed by multiple genes and their multi-step actions. Many oncogenes [1], tumor suppressor genes [2], and cell cycle-associated genes [3] are involved in carcinoma occurrence and development. Zinc-fingers and homeoboxes 2 (ZHX2) is a transcriptional repressor and a member of the human ZHX family that also includes ZHX1 and ZHX3. It can form homodimers and regulate a number of nuclear factor-YA (NFYA)- regulated genes via an organized transcription network [4]. A recent study showed that ZHX2 represses expression of alpha-fetoprotein (AFP) [5], glypican-3 (GPC3) [6], and H19 [7], and reduces multidrug resistance protein 1 (MDR1) [4] expression in liver cancer cells. ZHX2 abnormal expression is related with tumorigenesis of hepatocellular carcinoma (HCC) [5-7], myeloma [8], and lymphoma [9], but, until now, there have been no reports on ZHX2 protein expression in lung, esophageal, and breast carcinomas. p53 is a human tumor suppressor gene, and imbalance in its mutation and expression could lead to the occurrence of a variety of tumors [10]. Survivin is a new member of the inhibitor of apoptosis (IAp) family and is currently the most powerful inhibitor of apoptosis found. It is highly expressed in a variety of tumors [11]. How does ZHX2 work in the occurrence and development of these and other cancers? Does ZHX2 interact with p53 and survivin? The answers to these questions are unknown. In this study, we investigated the expressions of ZHX2, p53, and survivin and their relationships in many common human carcinomas.

The tumor tissues and corresponding paraneoplastic normal tissues of 36 cases of esophageal cancer (squamous cell carcinoma), 38 cases of gastric cancer (adenocarcinoma), 42 cases of lung cancer (including 12 cases of squamous cell carcinoma, 19 cases of adenocarcinoma, five cases of glandular squamous cell carcinoma, and six cases of neuroendocrine carcinoma), and 38 cases of breast cancer (invasive ductal cancer) were collected from the Department of Pathology, the First Affiliated Hospital of Guangxi Medical University, from January 2010 to January 2014. The pathological grading referred to the tumor classification and diagnostic criteria of WHO, and the tumor size, invasion depth, and staging criteria referred to the tumor lymph node metastasis (TNM) staging systems of the above tumors developed by the Union for International Cancer Control (UICC); all the patients did not undergo preoperative radiotherapy, chemotherapy, or immunotherapy. This study was conducted in accordance with the declaration of Helsinki. This study was conducted with approval from the Ethics Committee of Guangxi Medical University. Written informed consent was obtained from all participants.

The dewaxing of paraffin sections and EDTA high-pressure hot antigen retrieval was performed. The sections were then incubated with 3% H2O2 at 37°C for 10 min to remove the activities of endogenous peroxidase. The primary antibodies of ZHX2 (diluted 1:2000, Santa Cruz Biotechnology Co., Dallas, USA), p53(DAKO, North America, Inc., Carpinteria, CA, USA), and survivin (DAKO, North America, Inc.) were added in a drop-wise manner and incubated at 37°C for 1.5 h, and rinsed with PBS. The secondary antibodies were added drop by drop and the incubation continued at 37°C for 30 min before being rinsed with PBS. Following this, 3,3'-diaminobenzidine (DAB; DAKO, North America, Inc.) coloring, hematoxylin restaining, dehydration, hyalinization, and mounting with neutral gum was performed. The negative control used PBS to replace the primary antibodies.

SPSS16.0 statistical software was used to analyze the expressions of ZHX2, p53, and survivin in the tumors and adjacent tissues, as well as the relationships among these three factors and with the clinical pathologies (χ2 test or Fisher's exact test); to determine the correlations among ZHX2, p53, and survivin, the Spearman’s rank correlation analysis was performed, with test level set as α=0.05. 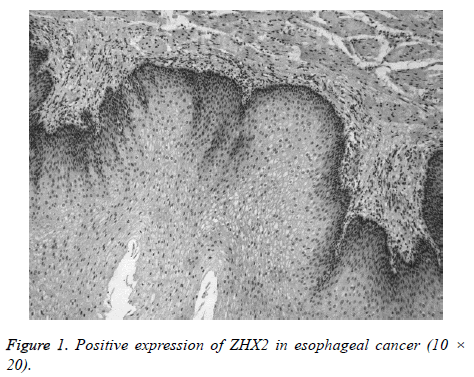 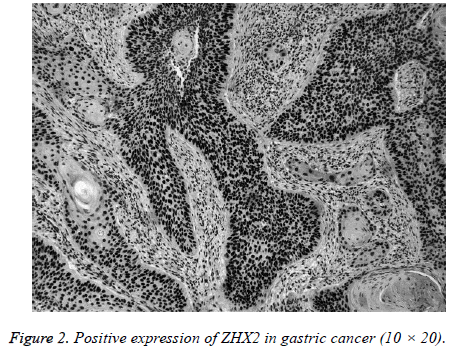 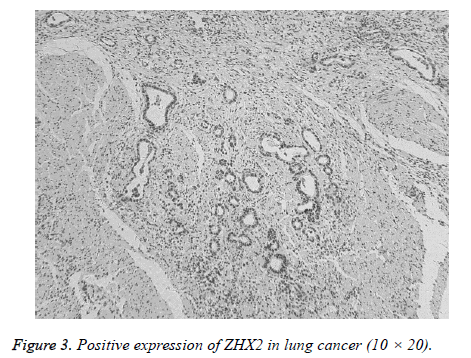 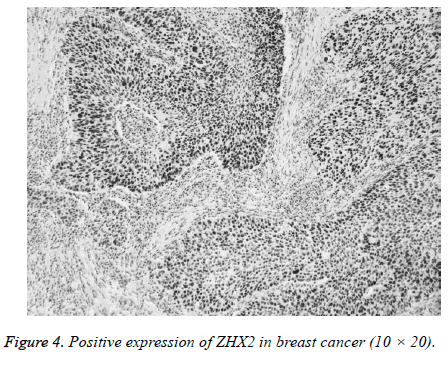 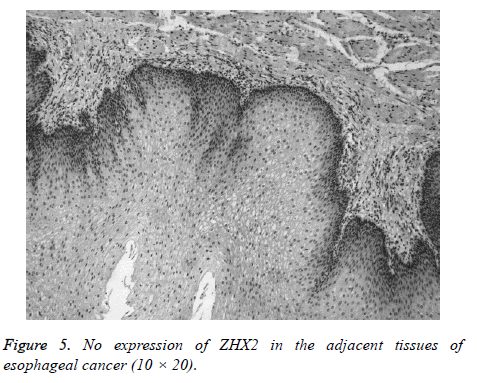 Figure 5. No expression of ZHX2 in the adjacent tissues of esophageal cancer (10 × 20).

Relationships of ZHX2 and clinicopathological features

Table 4. Relationships of ZHX2 and clinicopathological features in esophageal cancer.

Table 5. Relationships of ZHX2 and clinicopathological features in gastric cancer.

Table 6. Relationships of ZHX2 and clinicopathological features in lung cancer.

Table 7. Relationships of ZHX2 and clinicopathological features in breast cancer.

Correlations among ZHX2, p53, and survivin

ZHX2 is a member of the human ZHX family, with two zincfinger structures and five homologous structure domains [13]. Presently, certain studies have shown that ZHX2 could inhibit tumor cell proliferation and AFP expression in HCC [7], inhibit tumor cell proliferation in Hodgkin lymphoma [9], and inhibit tumor diffusion in multiple myeloma [8]. Whether the abnormal ZHX2 gene expression is associated with occurrence and development of other neoplasms, and with the abnormal expression of p53 and survivin, is unknown. Accordingly, we detected the expression of ZHX2, p53, and survivin in esophageal, gastric, lung, and breast cancers to investigate the role of ZHX2 expression in cancer occurrence and development.

The results of this study showed that ZHX2 was highly expressed in the tumor tissues of esophageal, gastric, lung, and breast cancers compared to adjacent normal tissues, suggesting that ZHX2 expression is associated with the occurrence of these common cancers. As a transcriptional repressor, the normal function of ZHX2 would be to inhibit cell proliferation, suppressing tumor formation [14], but the results of this experiment revealed different phenomena. The mechanisms of how ZHX2 could promote the occurrence and development of tumors are still not clear. Previous studies have reported that although ZHX2 could inhibit the proliferation of HCC, its expression in HCC exhibiting a high TNM stage was greater than in those presenting with a low TNM stage. Expression was especially significantly increased in HCC with metastasis [15], suggesting that the functions of ZHX2 might change with the tumor progression; for example, it acts as a suppressing factor in the early stage, but becomes a contributing factor in the late stage, with the ZHX2 mechanisms now promoting the occurrence and development of tumors. Certain previous studies have shown that several transcription factors also present such functional inversion during the development of tumors.

In most cancers, tumor size is closely correlated with the malignancy degree and prognosis of the patients. In addition, many studies have shown that the expression levels of a variety of cancer-associated factors were related with tumor size [16-18] tumors with a larger volume have a higher malignant degree and present a poorer prognosis. According to the results of this study, in gastric, colorectal, lung, and breast cancers, the expression of ZHX2 was associated with the tumor size. The groups with relatively smaller tumors showed a lower ZHX2 expression, compared to those with relatively larger tumors, suggesting that in addition to promoting the occurrence of tumors, ZHX2 could also affect the tumor cell proliferation. Given the relationship between the tumor size and its malignancy degree, ZHX2 could therefore be used as an indicator for judging the malignancy degrees of tumors.

Our results showed that ZHX2 was further expressed with increasing invasion depth in esophageal and gastric cancers, while its expression was connected with the existence of regional lymph node metastasis in lung and breast cancers— the cases with regional lymph node metastasis exhibited stronger expression of ZHX2 than those without lymph node metastasis indicating that ZHX2 was closely related to the biological behaviors of the tumors. Furthermore, previous studies have shown that the expression imbalance of tissue inhibitor of metalloproteinase (TIMP) and matrix metalloproteinase (MMP) might promote tumor invasion and metastasis [19,20]. These two genes are regulated by nuclear factor YA (NF-YA), and the regulation of expression of downstream genes by ZHX2 is through its binding with NFYA [4]; therefore, it could be presumed that ZHX2 is involved in tumor invasion and metastasis by affecting the expression of downstream genes via NF-YA.

It has been reported that p53 plays important roles in the occurrence and development of a variety of tumors, and its mutation or expression imbalance are closely associated with tumors [10]. It is believed that p53 expression is related to tumor metastasis [22]. In this experiment, all tumor tissues exhibited a higher expression of p53 compared to that in their adjacent normal tissues, supporting the relationship between p53 expression and the occurrence and development of tumors. This study also found that in gastric and lung cancers, the expressions of p53 and ZHX2 were positively correlated. Considering the relationships ZHX2 was shown to have with the invasion depth of gastric cancer, as well as with the regional lymph node metastasis of lung cancer, ZHX2 could collaborate with p53 to determine the extent of progress of these two cancers. In addition, previous studies have shown that NF-YA is involved in the expression regulation of p53 and that TobBp1 could mediate the gain-of-function mutations of p53 via NF-YA and p63/p73 [23-25]; accordingly, it could be speculated that in gastric and lung cancers, ZHX2 also regulates p53 via NF-YA, thus promoting tumor invasion and metastasis. However, this needs further experimental proof.

The anti-apoptotic factor survivin also plays an important role in the occurrence and development of tumors. This study proved that the expression of survivin in various cancer tissues were significantly higher than those in the adjacent normal tissues, and, in colorectal cancer, expression was further enhanced with the deepening of invasion. Thus, this study supports the role of survivin in promoting the occurrence and development of tumors. The correlation analysis showed that in gastric cancer and colorectal cancer, the expression of survivin and ZHX2 were positively correlated, signifying that in some cancer tissues, ZHX2 could act synergistically with p53 and survivin, or at least one of them, co-promoting the generation, invasion, and metastasis of tumors. Although previous studies also showed that, in general, survivin negatively correlated with p53, and inhibiting the expression of survivin could enhance p53 expression and increase p53- mediated apoptosis [26,27], according to the results of this study, although p53 and survivin were positively correlated with ZHX2 in some cancer tissues, p53 and survivin did not have a relationship in all cancers. In most of the cancer tissues tested, however, the highly expressed p53 had normally occurring mutations and lost the role of inhibiting the cell proliferation [28,29]; therefore, the results of this study are not contradictory against the previous findings.

In addition, the expression of ZHX2 was also related to age in breast cancer. The ZHX2 expression in the low-age group was higher than that in the relatively older group, suggesting the expression of ZHX2 might be associated with hormone secretion. While the grouping based on the expression of estrogen (ER) and progesterone (PR) showed no difference in the expression of ZHX2, it could not dismiss the existence of certain regulatory mechanisms between ZHX2, ER, and PR. Therefore, however, ZHX2 could not be considered as a potential indicator for determining whether breast cancers show signs of hormone therapy. As for the relationships of ZHX2 and age in lung cancer, survivin and gender in gastric cancer, and survivin and classification in lung cancer, because there were fewer experimental cases and no relevant literature is currently available, no practical significance could be recognized yet.

In summary, ZHX2 plays catalytic roles in the occurrence and development of common human cancers, such as esophageal, gastric, colorectal, lung, and breast cancers, and even in some cancerous tissues. A proposed mechanism is as follows: ZHX2 interacts with NF-YA and influences target genes, such as p53 and survivin. This then controls apoptosis and cell proliferation that both have roles in cancer occurrence and development when dysregulated. The relationships of ZHX2 with the invasion depth in digestive tract tumors, the regional lymph node metastasis in lung and breast cancers, and the tumor size and differentiation degree all prompted the idea that ZHX2 was related with the growth, invasion and metastasis of tumors. Therefore, ZHX2 could be used an indicator to judge the malignancy degree and analyze the biological behaviors of tumors. In the future, ZHX2 could be expected to become a diagnostic indicator for the above cancers, and to provide new therapeutic targets in gene-targeting treatment of cancers.

This study was supported by Scientific and technological research projects in Guangxi Universities, KY2015YB065 and Guangxi Youth Scientific Foundation (No.0728057).