Analysis and Seasonal Variation of Heavy Metals in Water and Sediment from Adyar Estuary.

Levels of heavy metal pollution in coastal environment are increasing continuously due to human activities and various studies have been conducted. The main objective of this study was to determine the selective physico-chemical properties of water, heavy metal concentration (As, Pb and Hg) and its seasonal variation in water and sediment sample collected from Adyar estuary located in Chennai, Tamilnadu state, India. The results revealed that the heavy metal concentration was higher during pre-monsoon season in water and the order of concentration Pb>As>Hg. In sediment sample the concentration of Pb and As was higher during Pre-monsoon and Hg was higher during monsoon season, the order of accumulation was Pb>As>Hg. The result shows that the physico-chemical properties were higher during monsoon, however the results were within the permissible level recommended by EPA.

More than three-quarters of the world’s human population lives in coastal watersheds [1]. Not surprisingly, the amounts, types and ecological impacts of pollutants discharged to estuarine and coastal waters are closely linked to population growth in these watersheds [2,3]. Heavy metals are conventionally defined as elements with metallic properties and an atomic number >20. Heavy metals concentrations in aquatic ecosystems are usually monitored by measuring their concentrations in water, sediments, and biota [4]. There is still a general concern about the impact of metals in the aquatic environment [5]. Pollution by heavy metals is a serious problem due to their toxicity and ability to accumulate in the biota [6]. Metal pollution has a harmful effect on biological systems and does not undergo biodegradation and accumulated in living organisms, thus causing various diseases and disorders even in relatively lower concentrations [7]. A substantial level of heavy metals causes the major hazard to the environment and accumulates in the ecosystem through two major paths; the first path due to emission from automobiles, mining, burning of coal, industries and natural earth crust, secondly the deposition of waste materials by humans. Heavy metals constitute one of the most dangerous groups because of their persistent nature, toxicity, tendency to accumulate in organisms and undergo food chain amplification and eventually threaten the health of humans that consume them and they are non-degradable [8]. Metals contamination is one of the major environmental problems in many countries and these contaminants generally come from various industries like leather, agricultural, textile industries etc. The most commonly occurring metals at these sites are lead, chromium, arsenic, zinc, cadmium, copper, and mercury. The presence of these metals in groundwater and soils may cause a significant threat to human health and ecological systems [9]. According to ATSDR 2015 Priority List of Hazardous Substance arsenic, lead and mercury occupy top three orders of the hazardous substance from 2011 [10]. Arsenic (As) is classified chemically as a metalloid, having both properties of a metal and a nonmetal; however, it is frequently referred to as a metal. As is a profoundly omnipresent and potential component, which causes toxicity to aquatic organisms in various levels. It might happen in surface water environment as an outcome of both regular defilement and anthropogenic exercises. Among metallic pollutants, arsenic is also one of the most relevant environmental global single substance toxicants [11]. Arsenic contamination of groundwater has been reported from many countries including Bangladesh, West Bengal, India, Vietnam, Argentina, China, parts of the USA [12,13] and Nepal. In India, there were seven states have so far been reported affected by arsenic contamination in groundwater above the permissible limit of 50 μg/L [12]. Mercury (Hg) is perceived globally as an imperative contaminant. Hg and its compounds are persistent bio-aggregate and toxic. Consequently, mercury contaminations represent a serious risk to humans and ecosystems [14]. In aquatic environments, mercury is found as a metallic or elemental form, inorganic compounds or organic compound. Mercury is a persistent environmental pollutant with bioaccumulation ability in fish, animals, and human beings [15]. Mercury salts and organomercury compounds are among the most poisonous substances in our environment. In the environment, lead is known to be toxic to plants, animals, and microorganisms. Effects are generally limited to especially contaminated areas [16]. Pb contamination in the environment exists as an insoluble form, and the toxic metals pose serious human health problem, namely, brain damage and retardation [17] and most deleterious effects on the hemopoietic, nervous, reproductive systems and the urinary tract, intrauterine death, prematurity and low birth weight [18]. Metals generally enter the aquatic environment through atmospheric deposition, erosion of geological matrix or due to anthropogenic activities caused by industrial effluents, domestic sewage and mining wastes [19].

Water and sediment samples were collected from the region (Figure 1) of the Adyar estuary corresponds to the mouth of the estuary and encloses the sand bar which was open during the collection period. Samples were collected from August 2014-April 2015 and in order to study effects of seasonal variation in the concentration of heavy metals. The study period was divided into Monsoon (southwest monsoon), Postmonsoon (northeast monsoon) and Pre-monsoon. The pH was determined by using systronic digital pH meter (Range 0-14.00, Accuracy ±0.01). Electronic conductivity and Total dissolved solids were estimated by using elico EC (Range - 1 ppm to 100 ppt, Accuracy 1% of range)/TDS analyzer (Range- 0 to 200 mS, Accuracy 1% of range). Biochemical oxygen demand in wastewater sample was determined in mg/L as method prescribed in APHA-AWWA-WPCF [20] and Chemical oxygen demand was determined by Dichromate reflux method as per APHA AWWA-WPCF. Electrical conductivity and total dissolved solids were measured using elico EC/TDS-analyzer. The water samples were analyzed for heavy metals by Inductively Coupled Plasma Mass Spectrometer (ICP-MS) Model ELAN DRC II, Perkin-Elmer Sciex ELAN 5000 Instrument, USA. The data was statistically analyzed using 17.0 (SPSS 17.0) and Microsoft excel was used for data entry. 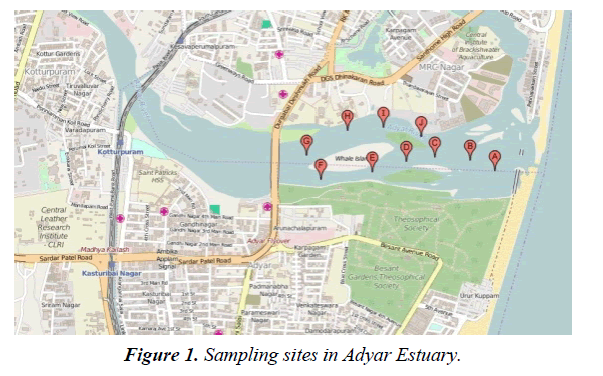 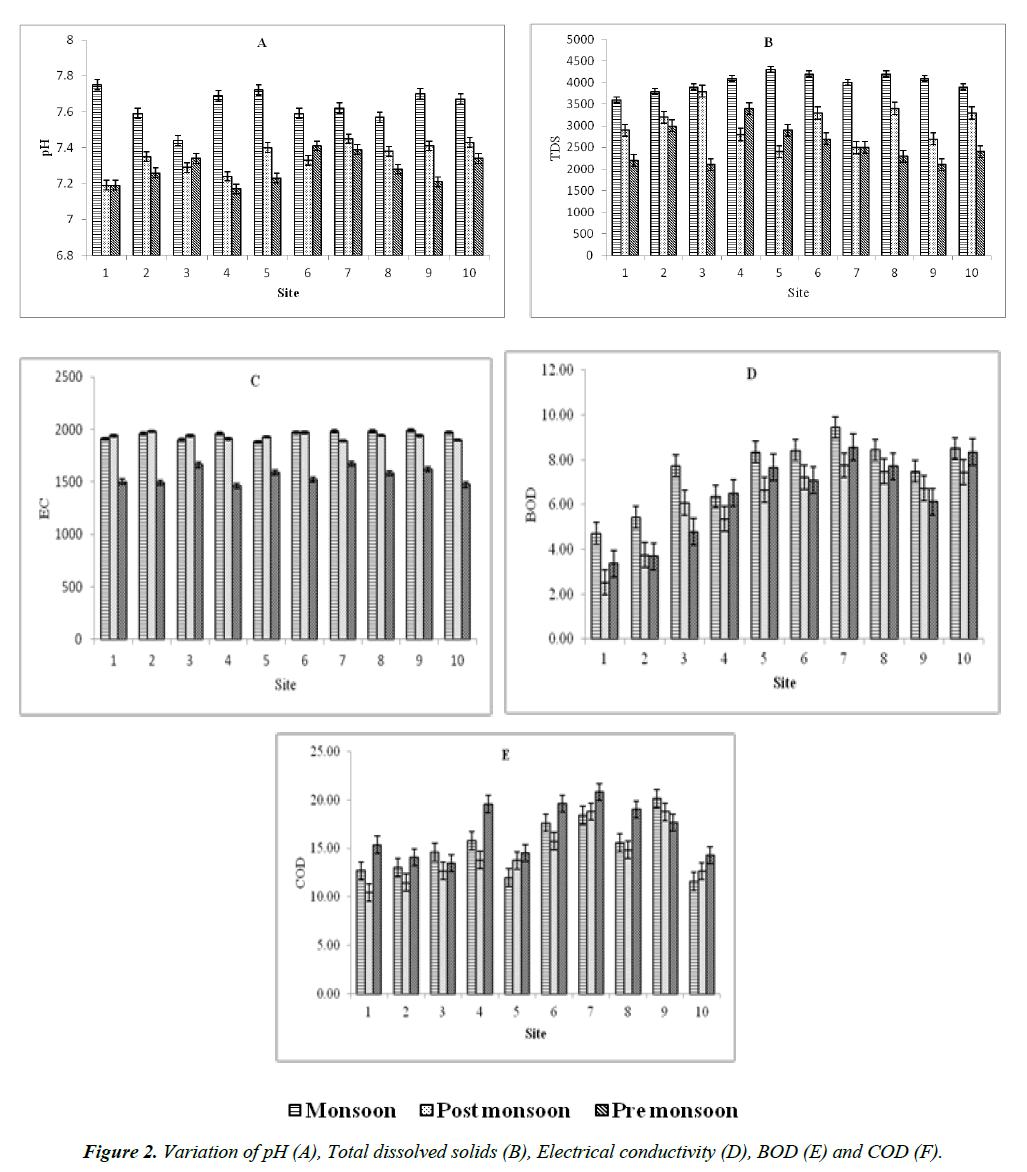 Table 2: Concentration of heavy metals in water and sediment in various seasons. 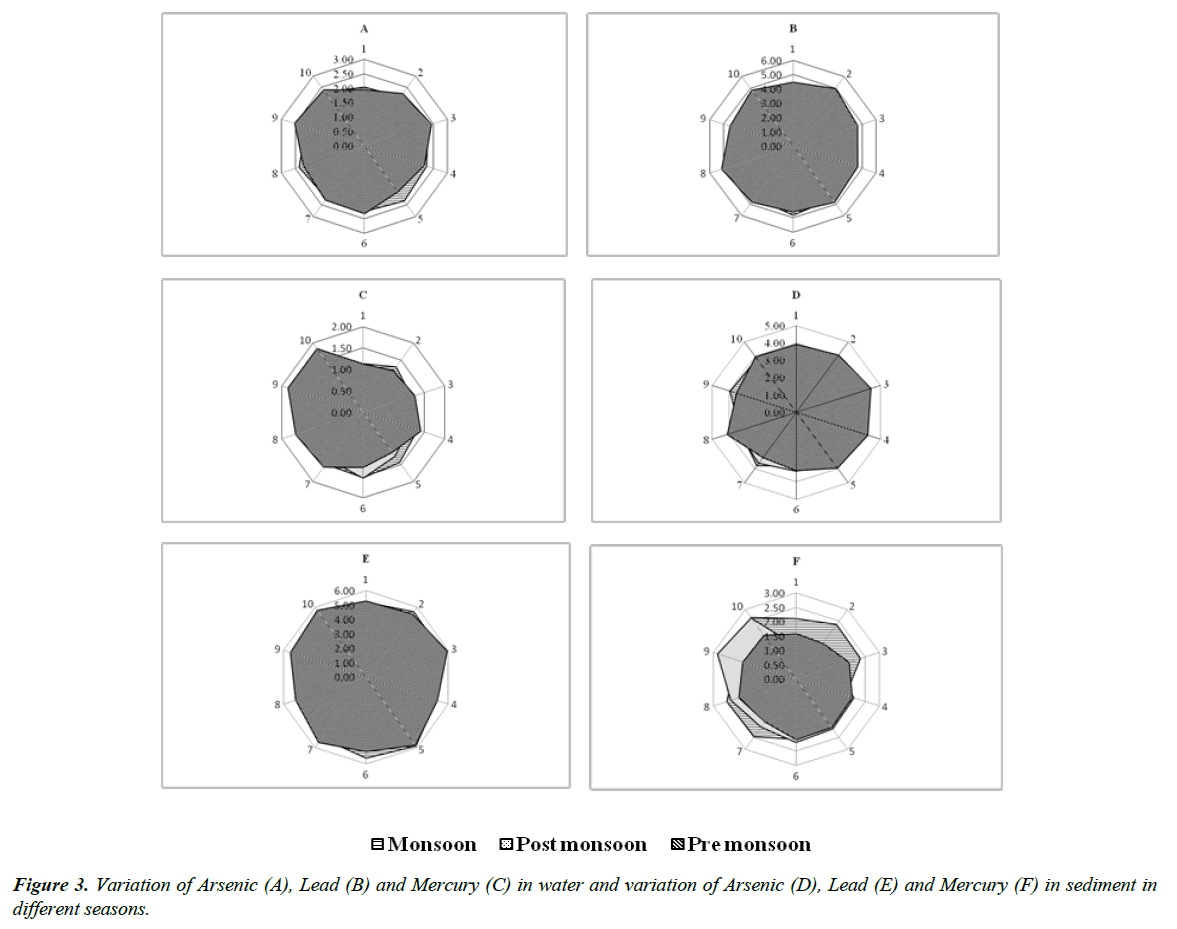 Throughout the study period, the pH, COD and BOD values are found within the permissible limits in Adyar Estuary. The pH values were found to be 7.17 to 7.75 and higher during monsoon. In generally agreed that the pH of a stream must not be less than pH 4.5 and not more than 9.5 if fish are to survive [21]. Higher value of BOD recorded during the monsoon season could be due to the microbial utilization of oxygen and occasional freshwater input and low BOD in the post-monsoon season due to effective assimilation of organic load [22]. Maximum COD during the pre-monsoon season was due to decrease in freshwater inflow, land drainage, domestic sewage and industrial inputs increase in salinity, temperature and phytoplankton productivity and microbial utilization of oxygen at the time of decomposition [23]. Low COD observed during the post-monsoon season may be due to the presence of heavy river run-off, decreased mixing of agricultural and domestic wastes, land drainage into the estuary and decreased biological activity due to decreased salinity and temperature. A high Conductivity value reflects the presence of the excess concentration of various ions present in the industrial effluent [24]. The EC and TDS values of Adyar estuary were found higher during monsoon. During monsoon, there was very good rainfall activity during the month of August over peninsular India, The rainfall activity over major parts of peninsular India enhanced during the last two weeks of August and the first week of September due to the two well-marked low pressure areas. Existence of an upper air circulation over Comorin area and neighborhood on 22nd August 2014 resulted in vigorous monsoon activity over South Tamilnadu on 23rd August 2014. This resulted 222.6 mm total rainfall by the end of August 2014. Hence the maximum levels of pH, EC, TDS and BOD were observed during this monsoon season. Since there was less total rainfall (20.2 mm) resulted high COD in Adyar estuary during pre-monsoon

The maximum concentrations of As (2.53 μg/l), Pb (5.15 μg/l) and Hg (1.85 μg/l) in water and As (4.45 μg/g), and Pb (5.92 μg/g) in sediment were observed during pre-monsoon may be due to the settlement of heavy metals from the domestic and industrial waste water and solid waste. Mercury (2.65 μg/g) concentration in sediment was higher during monsoon. Sediments can accumulate large quantities of chemicals particularly poorly soluble organic compounds that may be taken up by fish, both through contact with sediment and interstitial water and from food [25]. Sediment associated chemicals may or may not be bioavailable and there is a paucity of information on their combined effects on exposed organisms [26]. The introduction of heavy metals, in various forms, in the environment, can produce considerable modifications of the aquatic communities and their activities. Migration of these contaminants into non contaminated areas as dust or leachates through the soil and spreading of heavy metals containing sewage sludge are a few examples of events contributing towards contamination of the ecosystems [27]. The obtained results of pH, TDS, EC, As, Pb and Hg in water were within the acceptable limits as prescribe in EPA, Schedule VI (Environmental Protection Act 1986). However, there was significant variation in pH, TDS, EC, BOD during monsoon and COD during pre-monsoon season. There was significant variation in the concentration of heavy metals in water and sediment during pre-monsoon. The order of accumulation in water and sediment as follows Pb>As>Hg.