Use of steroids in kerosene poisoning- A case report

Hydrocarbon poisoning, though preventable, is still one of the most common reasons for PICU admission in low- and middle-income countries. Reason for admission of the child to PICU is to keep a close watch on the clinical conditions and various clinical parameters of the child. The chances of arrhythmias and seizures in these patients are quite high depending upon the degree of body damage and the inflammatory response of the body to the corresponding hydrocarbon. Kerosene is the most common ingested hydrocarbon may be because of its attractive color, low cost and easy availability in rural populations. Chances of aspiration pneumonitis are high if the viscosity of the used hydrocarbon is less as it spreads faster over a larger area. The chances of morbidity and mortality are high in a case of aspiration pneumonitis and its effect is mainly dependent upon the quantity of ingestion. Gastric lavage is contraindicated. Treatment is mainly supportive. Steroids are not routinely recommended. Here we are reporting a case of kerosene ingestion leading to pneumonitis after parents induced vomiting by them. The diagnosis of aspiration pneumonitis was made on the basis of symptoms and signs with the of investigations like Chest X-ray, oximetry monitoring. Thereafter, the patient required mechanical ventilation but responded dramatically to injectable steroids.

The hydrocarbons are mainly classified based on clinical significance as follows-

Two mainly affected systems with ingestion of hydrocarbons are pulmonary and central nervous system. Pulmonary effects can be as early as 6 hours and may appear up to 48 hours too [3-5]. Depending upon the viscosity and surface tension of the hydrocarbons there occurs involvement of many body organs and their systemic effects. Systems usually involved are GI System, neurological system, respiratory system, cardiac system, hepatobiliary system and out of this, the respiratory system is mainly affected. Secondary bacterial infections are also commonly seen. Inducing vomiting in this case scenario is not recommended, but if Vomiting either induced or spontaneous both can increase chances of respiratory symptoms like aspiration pneumonitis. Conventional treatment given is symptomatic and supportive only, which may also include managing airway and oxygenation if required. There is no proven role of prophylactic antibiotics or steroids in this type of case scenario that is hydrocarbon poisoning till date.

Here we report a case of a 1 year 6 months old female patient, who presented in the emergency department, 24 hours after alleged history of consumption of kerosene, who required high pressure mechanical ventilation, but responded dramatically to pulse steroid therapy.

A 1 year 6 months old female brought to casualty with history of kerosene ingestion of unknown amount. Following which parents induced vomiting. Later, on the same day the child had some breathing difficulty which was taken to a private hospital from where it was referred to us the next day. In casualty, the child was grossly distressed. Her respiratory rate was 70 per min with moderate retractions and grunting. Her SPO2 was 93% with 4 liters of oxygen by prongs. She was immediately admitted to PICU and started on noninvasive ventilation by prongs. She was febrile 38.3 degree Celsius and her heart rate was 140/min. intubated and ventilated after 17 hours of admission in view of increasing distress, falling consciousness and falling SPO2 below 90%. Her total leukocyte count (TLC) was elevated, 22300/ dl. She was started on injection ceftriaxone.

Initially she started on SIMV with PS mode with PIP of 19, PEEP of 6 with FIO2 60%. But her requirement kept on increasing with PIP OF 26, PEEP of 10 and FIO2 80% by day 3. Airway was secured, breathing and circulation was maintained buy gastric lavage was not performed because of corrosive property of ingestant. The results of ET secretion culture were received on day 4 of ventilation and a decision was taken to start with methylprednisolone 2 mg per kg. There was gross improvement in P:F ratio and decreasing oxygenation index (OI) after starting steroids. We were able to extubate the child on day 3 of steroid and day 6 of ventilation. After extubation the child was put on oxygen with nasal prongs at 2 lit/min. oxygen was stopped after 24 hours. After 3 days of injectable steroids, it was made oral. It was tapered and stopped over 7 days. During this period no side effects of steroids were identified. Child discharged after a total 14 days of stay (Figures 1 and 2). 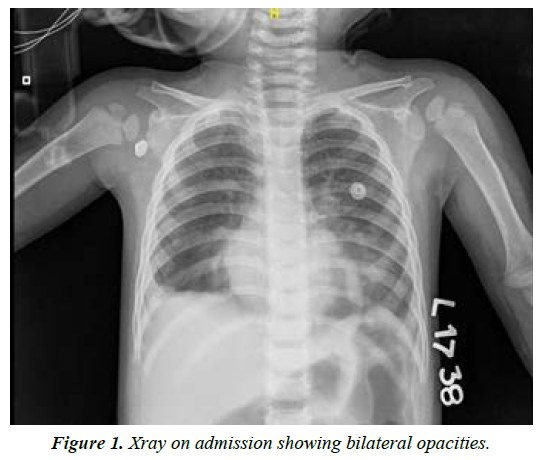 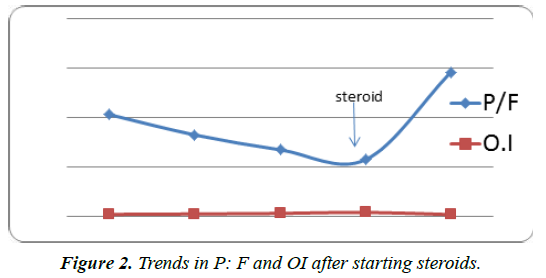 Figure 2: Trends in P: F and OI after starting steroids.

On the day of discharge, vitals were stable and O2 saturation was 98%. On respiratory examination, there was no wheeze or accessory muscles of respiration.

In a retrospective study done at PGI Chandigarh, it was seen that hydrocarbon ingestion constituted 35% of all poisonings admitted to PICU, kerosene was commonest of all (85%). Most cases visited in summer months may be kerosene being missed as water. Most patients were symptomatic by 4 hours symptomatic patients had chest radiographic abnormalities, the commonest being bilateral lower lobe infiltrates. Hypoxemia at admission was evident in nearly one third of patients and was associated with poor outcome. These patients had signs of severe respiratory disease, higher frequency of lavage and leukocytosis and increased need for mechanical ventilation6. They didn’t describe the treatment given to them.

In a study by Gondion et al (10%), the radiological findings included alveolar consolidation (51%), ground glass appearance (39%) and alveolar nodules (23%). The treatment hydrocarbon poisoning is mainly supportive but various studies and clinical trials are in support of its use in the case of poisoning. The usage of steroids is in favor of reducing the pulmonary fibrosis but they do come up with an adverse side effect i.e. secondary infections due to immunocompromised status of the individual. The usage of antibiotics in the case of hydrocarbon poisoning is controversial but it is generally to provide coverage from the infection while the usage of corticosteroids.

They can present with ever as early as half an hour of ingestion. Sometimes fever can persist for a few days and can be a marker of severity of lung involvement [3]. Treatment is mainly supportive. As of now steroids or prophylactic antibiotics are not recommended [3,6-9]. Though corticosteroids have often been administered, they have not shown any proven benefit to mortality or morbidity but they significantly reduce the progression of disease and lung fibrosis thereafter.

In our case the patient was not responding to the usual line of management hence the decision was taken to try steroids. Methylprednisolone was given in anti-inflammatory doses 2 mg/kg/day. We wanted to report this case as it highlights drastic recovery in our case of kerosene poisoning. We think that though steroids are not recommended they can be considered on a case-to-case basis after considering other factors and discussing with parents.

The exposure to kerosene can be via various routes includinginhalational, ingestion and dermal. Accidental ingestion of kerosene is a common cause of PICU admission. The main causes of morbidity and mortality include aspiration pneumonitis, secondary bacterial pneumonia and ventilator associated pneumonia. The higher risk of compilations is due to the properties of these hydrocarbons. Those with a low surface tension and low viscosity, e.g. kerosene, naphtha etc. lead to a more complicated course than liquids with high viscosity and high surface tension such as motor oils, tar, petroleum jelly etc.

In case of accidental ingestion of hydrocarbons, the management includes airway management, oxygen administration, resuscitation, early intubation and continuous respiratory monitoring. Gastric lavage or induced vomiting are contraindicated as this can lead to aspiration. Steroids, though not recommended for routine use, should be considered on a case to case basis requiring high pressure mechanical ventilation in which other factors like secondary pneumonias are ruled out.

The role of steroids is debatable and studies are still underway, but these have shown some benefits in certain conditions. In a retrospective study done in Turkey from 2008-2010 showed that out of 54 patients, 18 were administered corticosteroids, the majority of which showed significant improvement on the X-Rays after treatment.8 Some studies have also pointed to the fact that steroids reduce inflammation and thereby, fibrosis of the lung parenchyma. Steroids are not the treatment of choice as they can lead to secondary bacterial infections. Certain studies have also shown no or insignificant difference on steroid administration to kerosene poisoning patients [10- 15].

Thus, the role of steroids in hydrocarbon poisoning is still controversial and more studies are required in this field to know their advantages and disadvantages and make them an accepted treatment modality for this emergency situation.