Methods: Fifty participants with NPC were divided into Pre-RT Control (PC), Acute Reaction Period (ARP), and Delayed Reaction Period (DRP) groups based on the course of RT. A Region of Interest (ROI) based analysis was performed on the Cerebral Blood Flow (CBF) and anatomic data.

Radiotherapy (RT) plays an indispensable role in the curative treatment for patients with Nasopharyngeal Carcinoma (NPC). However, the brain tissue is quite vulnerable to radiation, which is inevitably contained within the radiation field. Therefore, acute and late effects of RT on the brain tissue are frequent [1]. Numerous studies have adopted special MRI methods to investigate minor changes in temporal White Matter (WM) or whole brain after RT [2-5]. However, few studies have explored the global Cerebral Blood Flow (CBF) or Gray Matter (GM) changes. Thus, whole brain perfusion and structural alterations in NPC patients undergoing RT are unclear, as is the relationship between CBF and GM changes.

CBF is an important physiologic parameter for investigating brain perfusion and function [6]. By employing endogenous arterial blood water as a tracer, three-dimensional Arterial Spin Labeling (ASL) can provide reliable and non-invasive CBF measurements, and is thus a great choice to measure CBF in humans [7,8]. Voxel-Based Morphometry (VBM) assesses Gray Matter Volume (GMV) voxel-by-voxel, and has been used extensively in structural investigations [9-12]. The objective of the current study was to use a new threedimensional fast spin echo pseudo-continuous ASL (3D FSE pCASL) MRI sequence to detect perfusion distribution abnormalities in the whole brain caused by RT for NPC and explore the relationship with gray matter changes, and to supplement imaging evidence of hemodynamically-related pathophysiology for brain tissue impairment induced by RT.

This study was conducted according to the World Medical Association Declaration of Helsinki. The local Medical Ethics Committee approved the study. After the procedures of the study were explained, written informed consent was obtained from all individuals.

A total of 50 patients pathologically-diagnosed with NPC based on biopsy were enrolled. All participants were Hans, right-handed, and divided into pre-RT control (PC (before RT)), acute reaction period (ARP (received the first RT in the past 1-6 months)), and delayed reaction period (DRP (received the first RT in 7-24 months)) groups. The exclusion criteria were as follows: patients diagnosed with intracranial primary tumors; a history of intracranial surgery or head injury that could affect brain perfusion; left-handedness; and routine MRI abnormalities or contraindications for MRI. The routine MRI images were examined by two experienced neuro-radiologists.

A total of 248 anatomic images, 76 ASL images scanned by MRI and 38 CBF maps automatically generated based on ASL data for each patient were acquired for further data analysis. Participants were asked to remain still with their eyes closed in the scanner.

One of the authors performed image pre-processing using Statistical Parametric Mapping software (SPM8; Welcome Department of Cognitive Neurology, UK http://www.il.ion.ucl.ac.uk/spm/), VBM8 based on MATLAB (Math Works, Natick, MA, USA), and the Resting-state fMRI Data Analysis Toolkit (REST 1.8; http://www.restfmri.net/forum/?q=rest13). For each participant, ASL images were preprocessed as follows: the original image was converted to Neuroimaging Informatics Technology Initiative (NIFTI) format; the image quality was checked and individuals with low SNR were eliminated; 3D T1 image data were transformed into Montreal Neurologic Institute (MNI) space and segmented into White Matter (WM), GM, and Cerebral Spinal Fluid (CSF) and a T1 brain tissue image was created; CBF maps were accurately co-registered with the structural T1 brain images and spatially normalized into a standard stereotaxic space, and during this process, the final CBF maps were resampled to a 2 × 2 × 2 mm3 isotropic voxel size; CBF maps were converted into z-score maps to control individual hemodynamic variation and spatially smoothed with a 4-mm isotropic Gaussian kernel to normalize CBF maps as required and CBF values were extracted by means of anatomic Regions of Interest (ROIs), which were defined by Anatomic Automatic Labeling (AAL) templates (Figure 1). 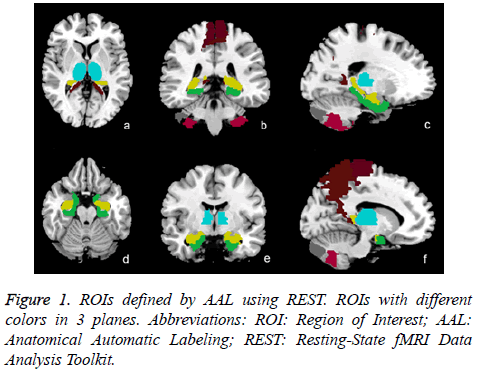 Three-dimensional structural images were processed using a toolbox for Data Processing and Analysis for Brain Imaging (Dpabi; http://rfmri.org/dpabi14) based on the VBM8 toolbox and Diffeomorphic Anatomical Registration Exponentiated Lie Algebra (Dartel) software. The VBM procedure involves the segmentation of the original anatomic MRI images in GM, WM, and CSF tissues, followed by GM image normalization to templates in stereotactic space to acquire optimized normalization parameters, which were applied to the raw images. Then, GM images were smoothed using a 6-mm full width at a one-half maximum (FWHM) isotropic Gaussian kernel. Finally, the relative GM volume (rGMV) was extracted by means of ROIs for further statistical analysis.

All data were represented as means ± SD (± s) of three or more independent experiments. If the data are homogenous, Analysis of variance, Student-Newman-Keulsa and Pearson’s correlation will be used. If the data are not homogenous, Kruskal-Wallis, Games-Howell test, as well as Spearman Rank Correlation analysis will be used. All the analyses were carried out using the SPSS19.0 software (SPSS Inc., Chicago, IL, USA). Values less than 0.05 were considered to be statistically significant.

Table 1 shows that all groups were essentially of equal mean age, and had a similar distribution of gender and education level (all p>0.05).

Table 1. Demographic summary of participants enrolled in the study.

When compared with the PC group, patients in the ARP group had higher perfusion in the left cerebellum_8, left cerebellum_crus_2, left paracentral lobule, and bilateral thalamus (all p<0.05). However, the DRP group had no significant statistically difference with other groups (all p>0.05), as shown in Table 2.

Correlation between the CBF and GMV

Table 4. Correlative analysis of CBF and rGMV in the subjects.

A series of studies have explored microstructural changes in brain tissues induced by RT in NPC patients using MRI methods, including Diffusion Tensor Imaging (DTI) [2-5,13-15] and proton magnetic resonance spectroscopy (1HMRS) [5,16]. Most of the studies investigating brain tissue changes have been limited to the temporal lobe. Specifically, studies using 1H-MRS has suggested that the N-acetyl aspartate (NAA)/creatine (Cr), choline (Cho)/Cr and NAA/Cho ratios decreased during the early delayed reaction, then increased similar to pre-RT [3,16]. Another study using DTI reported that the fractional anisotropy (FA) value decreased after RT. However, the Apparent Diffusion Coefficient (ADC) value significantly increased [4] in the whole brain, and extensively in white matter after RT. The Mean Diffusion (MD) values increased were in numerous brain areas [2]. All of the above studies suggested early and dynamic micro-injuries of nerve tissue after RT in the temporal region or whole brain; however, few studies have explored whole brain CBF and gray matter volume abnormalities.

In the current study, the ASL method was utilized to assess RTinduced perfusion alterations in NPC patients. A high perfusion pattern in the ARP group was observed in the left cerebellum_8, left cerebellum_crus_2, left paracentral lobule and bilateral thalamus. The physiopathology leading to brain perfusion changes may be multifactorial, including mitochondrial disturbances, vascular abnormalities, and inflammatory factors, which widely affect the brain in the long term [17-20]. The cerebellum and thalamus are close to the target area of RT, thus we speculate that the brain gray matter showing high perfusion may be directly induced by radiation. Recent animal studies have confirmed that brain blood vessels expand by radiation during the acute period, and may be lead to hyperperfusion [1,21]. However, only the right paracentral lobule had a decreased rGMV at that point in time, which indicated that high perfusion did not result in a larger GM volume.

In the DRP group, perfusion was gradually restored to near the level of the PC group; no significant difference was observed with the other groups. When compared with the ARP group; however, VBM detected expansion of the GM in the left cerebellum_8, bilateral cerebellum_crus_2 and right paracentral lobule in the DRP group. The results further established that the increase in cerebral rGMV in the DRP group was not caused by high cerebral perfusion, but may be due to other reasons, such as enlargement or increase in nerve cell or stromal element size. This finding was verified by further correlation analysis showing that the CBF and rGMV were negatively related.

Both animal experiments and a functional imaging study confirmed that brain morphology may change to adapt to function [22]. Brain perfusion alterations may also be associated with cortical thickness abnormalities [23]. Although CBF and rGMV abnormalities were observed and showed a negative relationship in several specific areas in the current study, other studies have suggested that increased cortical thickness may involve higher brain perfusion [24]. Therefore, the mechanism of how RT influences brain perfusion and structure appears to be complicated. In functional brain disorders, perfusion pattern changes can occur independently of anatomic changes or precede anatomic changes which were established in the current study [7].

Tools of measuring brain CBF, such as dynamic susceptibility contrast-enhanced perfusion-weighted imagine (DSC-PWI), H2O15 Positron Emission Tomography (PET) and ASL are important methods in investigating brain pathophysiology and function [25-27]. Because of non-invasive features, several important technical improvements, such as ASL, it is currently possible to easily obtain whole-brain perfusion parameters, thus becoming a good choice for disease screening and routine longitudinal tracking clinically and for research purposes [28,29]. ASL is comparable to DSE-PWI with respect to CBF, and also reveals similar brain activity patterns to PET [30,31]. Furthermore, ASL has several advantages over PET or DSCPWI, such as avoiding potentially harmful exogenous tracers, higher spatial and temporal resolution, and less susceptibility to the effects of Blood-Brain Barrier (BBB) permeability changes [7,30,32-34]. In addition, the current study adopted a new pCASL method based on the 3D-FSE sequence with spiral readout to increase SNR and reduce motion artefact and susceptibility distortion [35,36]. Due to the prominent labeling efficiency, superior SNR and lower inter-subject variability than conventional ASL, pCASL has become the best choice for brain perfusion and functional studies [7,37,38].

There were limitations in our research. First, CBF might be affected by chemotherapeutics, thus further research should take this into consideration. A further voxel-by-voxel analysis should be performed to acquire more accurate overall results.

This study suggests that early, transient, and complicated brain perfusion and GMV abnormalities caused by RT for NPC, which may be due to the micro-injuries of brain vascular and nerve tissues. No similar reports exist and therefore more research is required to confirm our results. Moreover, our research indicates that the new 3D FSE pCASL technique allows a complete exploration of global brain perfusion abnormalities induced by RT, and a more widely available clinical application in the future.