This study included a total of 96 consecutive patients undergoing curative surgery for colorectal cancer at the National Cancer Center East Hospital from February to December 2012 (Table 1). Patients receiving neoadjuvant therapy were excluded from this study. The study subjects’ clinical data and other information were collected from the hospital’s electronic medical records. To follow up on their postoperative course, all subjects were instructed to present to the hospital once every four months for the first 2 years and once every 6 months for the following three years. At the time of follow-up, all subjects underwent chest, abdominal, pelvic CT examinations and blood sampling tests according to the protocol of the Japan Colon Cancer Research Group. In addition, all subjects underwent lower gastrointestinal endoscopy in the 2nd and 5th postoperative years and were instructed to present to the hospital once a year after 5 years of follow-up. All experiments were performed after obtaining comprehensive written informed consent from all subjects. This study was approved by the National Cancer Hospital Ethical Review Board (No. 2012-067) and was performed in accordance with relevant guidelines and regulations. 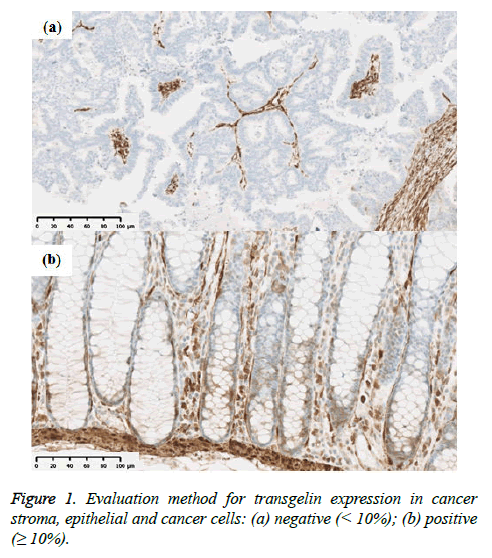 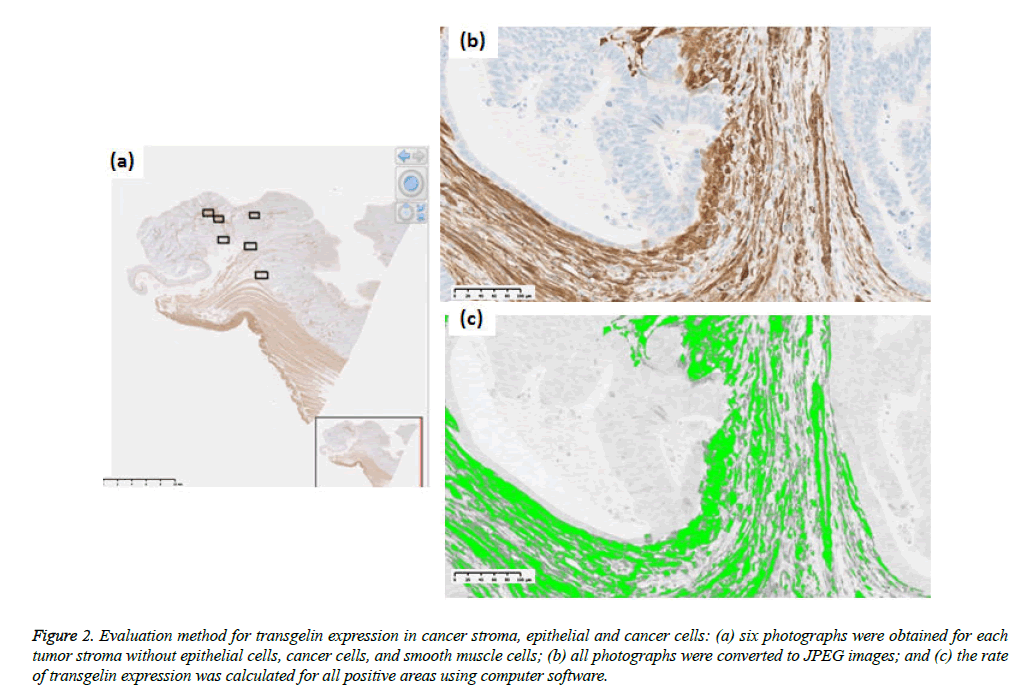 Figure 2: Evaluation method for transgelin expression in cancer stroma, epithelial and cancer cells: (a) six photographs were obtained for each tumor stroma without epithelial cells, cancer cells, and smooth muscle cells; (b) all photographs were converted to JPEG images; and (c) the rate of transgelin expression was calculated for all positive areas using computer software.

Examination for differences and similarities between Transgelin and α-SMA expression

Transgelin expression and clinicopathological features were examined for association by the Mann-Whitney U test. The cut-off value for each material was determined using the ROC curve. Transgeln and the area of α-SMA were evaluated for correlation using Spearman's rank correlation coefficient "r". DFS was calculated using the Kaplan-Meier method. All analyses were performed using JMP version 13.0.0 (SAS Institute Cary, NC, USA). All calculated P values were two-tailed and P values < 0.05 were considered statistically significant.

Table 2: Staining positive rate by each organization of Transgelin. 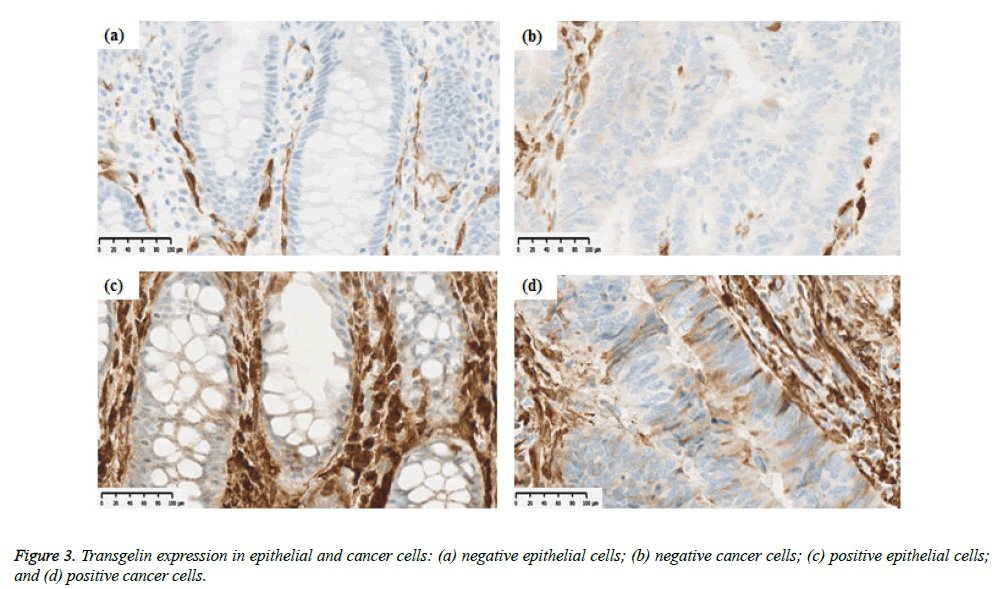 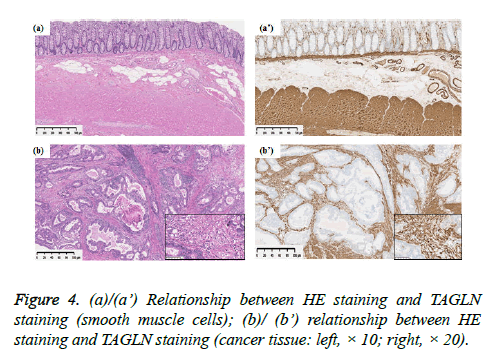 Table 3: In Transgelin of Tumor stroma and cells, the results of tests by area ratio for each charactarestics. 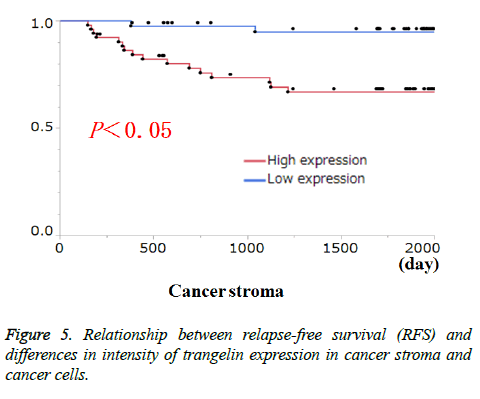 Figure 5: Relationship between relapse-free survival (RFS) and differences in intensity of trangelin expression in cancer stroma and cancer cells. 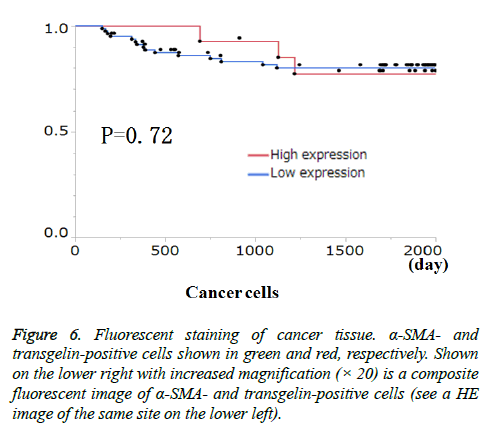 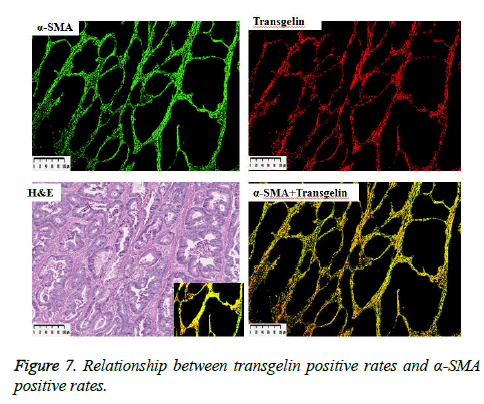 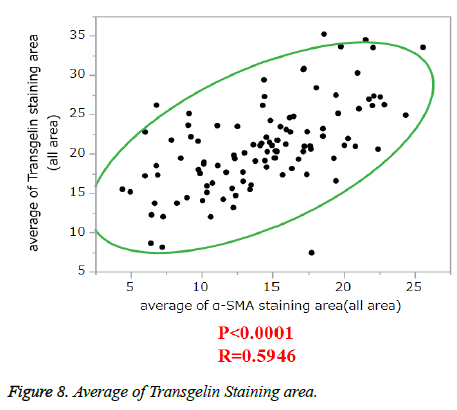 Given the strong association and co-expression of Transgelin with α-SMA, Transgelin expression in cancer stroma may serve as a CAF marker, as well as a prognostic biomarker. Again, Transgelin, an actin-binding protein, may upregulate α- SMA expression in colorectal cancer tissue. We earlier reported that α-SMA expression was associated with tumor elasticity, which is in turn associated with clinical outcome, suggesting that mechanical properties of cancer tissue may have a role to play in regulating cancer cell migration as well as determining the malignant potential of cancer cells. Therefore, Transgelin expression in cancer stromal fibroblasts may be involved in the regulation of tumor stiffness through α- SMA expression, thus enhancing the malignant behavior of tumor cells. Further bio-mechanical study is required to validate our study findings [11,12,16,17].