Green Leafy Vegetables (GLVs) contain an immense variety of bioactive non-nutritive health enhancing factors. GLVs have an abundance of phenolic compounds. The AOA of phenolic compounds is mainly due to the redox properties, which allow them to act as reducing agents, hydrogen donors, singlet oxygen quenchers, heavy metal chelators and hydroxyl radical quenchers Total phenoplic content (TPC) of organic and conventional GLVs was determined using Folin-Ciocalteu reagent spectrophotometrically with Gallic acid as the standard. Fresh samples of GLVs were extracted separately with water, methanol and ethanol for the estimations. Curry leaves (Murraya koenigii), a commonly used green in most India preparations had the highest phenolic content ranging from 3468.80 ± 88.03 to 5084.53 ± 123.49 μg of GAE/g of FW in all the solvents of both OG and CV farming system. Agathi (Sesbania grandiflora) and fenugreek (Trigonella foenum graecum) had more polyphenolics in water extract. These greens are generally cooked in water medium; hence they are a valuable source of phenols in the diet. In our study, a one-way between extracts of solvents ANOVA was conducted to compare the effect of solvents used in the extraction of total phenols in each type of farming methods (OG or CV). The results elucidate that the quantity of total phenolics in GLVs varied among different extracting solvents.

Green leafy vegetables (GLVs) are micronutrient dense nature’s gift to mankind that provide more vitamins per mouthful than any other food. They are a rich source of calcium, iron, β-carotene, vitamin C, dietary fibre and many trace minerals. GLV also contain an immense variety of bioactive non-nutritive health enhancing factors such as antioxidants, phytochemicals, essential fatty acids and dietary fibre. There has been a growing recognition of importance of these phyto nutrients in the prevention of non-communicable disease especially in the past two decades. Various studies reported the presence of abundant phenolic compounds some of them namely quercitin, kaempferol and acacetin in GLVs [5]. The commonly co`nsumed greens are coriander (Coriandrum sativum), curry leaves (Murraya koenigii), amaranth, mint (Mentha spicata), fenugreek (Trigonella foenum graecum), drumstick (Moringa oleifera) etc. These greens are inexpensive, and it is advisable to include at 50g in one’s diet daily. They contain vital nutrient required for growth and maintenance of health.

Polyphenols encompass several classes of weakly acidic chemicals related to, or built upon the phenyl ring. Polyphenols contain one or more phenolic hydroxyl groups directly attached to these carbon-based aromatic phenyl-ring compounds. Reactive Oxygen Species (ROS) easily oxidize these to quinones, a property that helps account for their free radical scavenging capacity. Polyphenols have diverse functions in plants and are a major class of secondary plant metabolites. The major plant Polyphenols by volume is lignin [6]. Plant polyphenols may have beneficial and/or detrimental effects on mammals. After plants die, phenolic compounds can persist for weeks and affect decomposition. They also have an impact on the shelf life of harvested produce [7].

In the present study, Total Phenolic Content (TPC) of the selected samples was estimated by using Folin-Ciocalteu method. The data obtained was consolidated and tabulated for statistical analyses. We hypothesised that there is no difference between the total phenolic content of OG and conventionally grown GLV. In addition, we used three solvents for the extraction of phenols, viz., water, methanol and ethanol and hypothesised that there is no difference in the quantities of phenols in the extracts using the three solvents.

The Folin-Ciocalteu (F-C) method of assay is the simplest method available for the measurement of phenolic content in products. This method is a development of Folin-Denis reagent used in the early 19th century for the determination of tyrosine in proteins [8]. F-C reagent can be prepared by dissolving 100 g sodium tungstate (VI) dihydrate and 25 g sodium molybdate (VI) dihydrate with 700 ml distilled water, 100 ml concentrated hydrochloric acid, and 50 ml of 85% phosphoric acid to which is added 150 g of lithium sulphate hydrate. This reagent is very stable if protected from reductant and light even if diluted. For many years now, the F-C method of assay has been in use as a measure of Polyphenols in natural products, and the basic mechanism is an oxidation/ reduction reaction with the phenolic group being oxidized and the metal ion reduced [9].

The quantity of TPC was determined using Folin-Ciocalteau reagent as per the method proposed by [2] and Gallic acid was used as the standard. The absorption was measured at 725 nm using UV VIS double beam spectrophotometer. The method was validated according to national and international guidelines. The optimum conditions for analysis time, wavelength, and standard substance were 30 min, 760 nm, and Gallic acid, respectively. Under these conditions, validation by UV/Vis spectrophotometry proved the method linear, specific, precise, accurate, reproducible, robust, and easy to perform. The requirements for analytical application and the reliability of the results were met by this method.

The standard curve was obtained using gallic acid for total phenolic content. The calibration curve was plotted between the concentrations of 0-50 μg of Gallic acid (Figure 1) for phenolics. 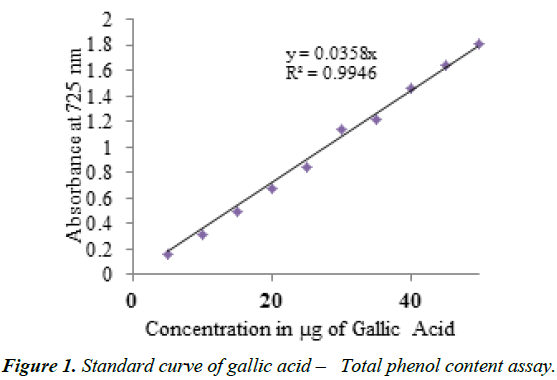 The results of total phenolic content were expressed in μg of Gallic acid equivalence (GAE) /g Fresh Weight (FW). The increase in absorbance is based on the intensity of colour developed and is directly proportional to concentration of standard for total phenolics. The R2 value obtained in the calibration curve was 0.9946, for total phenolics, All the assays were carried out in UV-Vis Double Beam Spectrophotometer of Systronics, Model No. 2201. All the procedures were done in triplicates and for concordant values.

The extract was prepared according to the method used earlier by others with some modifications [10]. One hundred gram of the plant material was weighed, macerated and homogenized. Five to ten grams of the homogenised sample was extracted with distilled water, methanol or 80% ethanol. Extraction was carried out for 2 h at 50°C using an orbital shaker at 200 rpm. The ratio of samples to extraction medium was 1:25. The mixture was centrifuged at 2500 rpm and the supernatant was transferred into brown bottles and stored at -4°C. The extracts were suitable diluted for the estimation of total phenols. The extraction solvent selected was 80% ethanol based on the results [11] using some common Malaysian herbs while water is the usual solvent used by the public when consuming these GLVs [12].

TPC of the samples were evaluated using Folin-Ciocalteu reagent [13], in which 150 μl of samples were diluted with 2400 μl of deionized water. Thereafter, 150 μl of Folin-Ciocalteu reagent (0.25N) was added, mixed for 3 minutes and the reaction mixture was then neutralized with 300 μl of Na2CO3 (1N). The final mixture was incubated for 2 h in the dark and UV absorbance were taken at 725 nm. Gallic acid was used as standard and results were reported in micromol gallic acid equivalent per gram fresh weight (μM GAE/g FW).

Antioxidant potential of phenolic compounds is a scientifically established reality now [14]. The data on TPC of GLVs are given in Tables 1 and 2 for organic and conventional samples separately. Ten GLVs were analyzed for TPC using water, methanol and ethanol solvents according to the procedure explained in the above section.

Curry leaves (Murraya koenigii) had the highest phenolic content ranging from 3468.80 ± 88.03 to 5084.53 ± 123.49 μg of GAE/g of FW in all the solvents of both OG and CV farming system. The TPC of GLVs are in the following order: curry leaves (Murraya koenigii)> mint (Mentha spicata)> agathi (Sesbania grandiflora)> fenugreek (Trigonella foenum graecum)>manathakkali (Solanum nigrum)>coriander (Coriandrum sativum). The table below gives the data obtained in the present study.

The other GLVs were found to have varying levels of phenols. The quantity of phenolics ranging from 177.23 ± 5.47 to 5084.53 ± 123.49 expressed as μg of GAE/g FW of GLVs. In the OG and CV GLVs methanolic extracts had the highest TPC in mint (Mentha spicata), coriander (Coriandrum sativum) leaves, manathakkali leaves (Solanum nigrum). Curry leaves (Murraya koenigii) had higher phenolic content in OG methanolic extracts whereas agathi (Sesbania grandiflora) and fenugreek (Trigonella foenum graecum) had more polyphenolics in water extract. The amount of total phenolics in water extracts ranged from 349.16 ± 30.51 to 4404.10 ± 506.91 μg of GAE/g FW.

TPC in curry leaves (Murraya koenigii) and fenugreek leaves (Trigonella foenum graecum) had similar amount of Polyphenols [15] which was 158.33 mg of tannic acid/ 100 g. However, some others [16] reported that total phenols in fenugreek leaves (Trigonella foenum graecum) was 217.5 mg of catechol/ 100 g FW. Reported TPC of some common GLVs ranged from 5.0 to 69.5 mg of TAE/ g of extracts [17]. Therefore, it can be said that the TPC of vegetables varies widely depending on the variety of vegetables. Comparison is difficult, as method of extraction solvents used; method adopted to extract phenol and standard compounds adopted varied among the studies.

Coriander leaves (Coriandrum sativum), curry leaves (Murraya koenigii), manathakkali leaves (Solanum nigrum) and mint (Mentha spicata) had greater phenol content in methanolic extracts than ethanol and water. Furthermore, methanol is the most suitable solvent in the extraction of polyphenol compounds due to its ability to inhibit the reaction of polyphenol oxidase that causes the oxdation of phenolics and its ease of evaporation compared to water [22]. 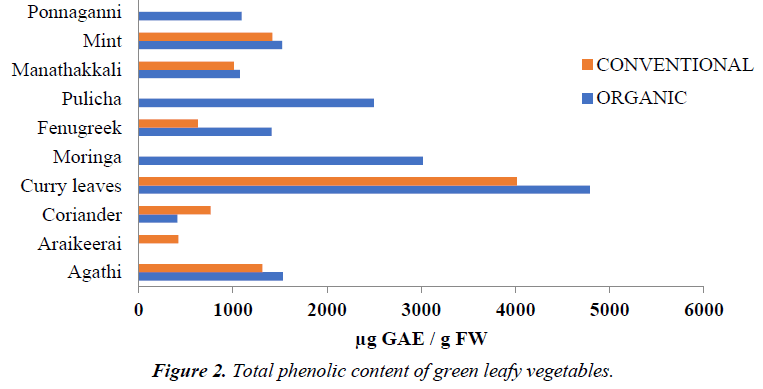 Among the GLVs assayed, which did not have an OG or CV counterpart, OG moringa greens (Moringa oleifera) had the highest TPC followed by pulicha greens (Hibiscus canabinus), ponnaganni (Alternathera sessilis) and arai keerai. The TPC in OG pulicha (Hibiscus canabinus) and moringa greens (Moringa oleifera) ranged from 177.23 ± 5.47 to 3769.17 ± 228.95 and 2606.72 ± 48.54 to 3414.63 ± 113.26 μg of GAE/g FW respectively. Apart from this, water extracts had lower phenol content in all the unpaired GLVs except CV araikeerai (Amaranthus tristis) which had 451.98 ± 38.23 μg of GAE/g FW. The results elucidate that the quantity of total phenolics in GLVs varied among different extracting solvents.

TPC in leaves of amaranth species and spinach leaves was 84.9 ± 13.02 and 33.8 ± 7.33 mg of GA/ 100g respectively in the raw food sample [25]. The phenol content was higher in amaranth species and it was directly proportional to the AOA measured using β-carotene and linoleic acid system. In their study, they also added that the phenol content was ranked first in GLVs assayed when compared to other vegetables and roots and tubers.

The most probable reasons for these variations in the values may be due to reason that phenolic compounds may be water-soluble, lipid soluble, insoluble, or bound to cell walls. Therefore, the efficiency in extraction is a very important factor in quantitative analysis of AOA of food samples besides the natural occurring causes of the variation

Different levels reported in these studies may be attributed to the different plant species, crops, protocol of analyses and standards used to express TPC by the investigators. The AOA of phenolic compounds is mainly due to the redox properties, which allow them to act as reducing agents, hydrogen donors, singlet oxygen quenchers, heavy metal chelators and hydroxyl radical quenchers [15]. The antioxidant activity of phenolic compounds is mainly due to its redox properties, which can play an important role in adsorbing and neutralizing free radicals, quenching singlet and triplet oxygen, or decomposing peroxides [26].

The results of this study indicate that GLVs had phenolics that vary widely in different extracts and agricultural pattern. Further research is needed to find out the various factors influencing phenolic content in plants.

The authors are grateful for the funding received from the University Grants Commission, New Delhi, India, under the Major Research Project for College/University Teachers to carry out the research work.