Objective: This research was to study the inactivation of HCCS1 gene in Chinese patients with Non- Small Cell Lung Cancer (NSCLC) and the mechanism of MicroRNA 139-5p in the inactivation process.

Conclusion: As a tumor suppressor gene, HCCS1 (hVPS53) gene has abnormal changes in many tumor tissues. This study shows that the MicroRNA 139-5p methylation acted on Chinese HCCS1 non-small cell lung cancer gene suppression caused by the loss of heterozygosity and abnormal methylation of gene silencing, may be the mechanism of HCCS1 gene inactivation.

RNA (microRNA, miRNA) can regulate the expression of negatively in the post transcriptional level [4], participate in the occurrence and development of many kinds of tumors. MicroRNA plays an important role in the metastasis and invasion of tumor cells [5-7]. The specific role of microRNA-139-5p (miR-139-5p) in the development of lung cancer and the related mechanisms are not very clear. The short arm of human chromosome 17 has a high frequency of loss of heterozygosity in a variety of tumors, HIC-1 and other tumor suppressor genes have been cloned from this site [8], 17p13.3. In 2001, the 17p13.3 gene was cloned for the first time, which was named HCCS1. In this paper, we analysed the inactivation of HCCS1 gene in Chinese Non-Small Cell Lung Cancer (NSCLC) and the mechanism of MicroRNA 139-5p in the inactivation process of HCCS1.

51 cases of lung cancer tissue samples in this study were collected from April 2015 December~2015 surgical resection and postoperative pathological diagnosis were diagnosed as NSCLC patients, the clinical characteristics of patients are shown in Table 1 for each patient from the cancer tissues and the tissues of 2 copies, a rapidly placed liquid nitrogen freezing, another place in the formalin fixed. All patients were not treated with chemotherapy or radiotherapy before operation.

The total RNA was extracted from cancer tissues and adjacent tissues according to Triblue specification [9]. 50 mg Triblue 1 ml were added to tissue, homogenized, kept in room temperature for 5 min, added chloroform 200 μl, 13400 Xg 4ºC centrifugal for 10 min, new 1.5 ml to learn from the upper water pipe, isopropanol. 3 times of volume (pre cooling) were added and then mixed, placed on ice 20 min. 4ºC, 13400 Xg centrifugal for 15 min. Discard the supernatant with 75% is 200 μL rinse for 1 times, fast dry centrifugal liquid, drying after adding sterile water DEPC 50 L dissolved RNA, according to the operation of subsequent experimental procedures or the remaining RNA save -80˚C. The total RNA was quantified by UV spectrophotometer.

HCCS1 (hVPS53) gene was amplified by real-time fluorescence in IQ5 (Bio-Rad- Co., Ltd) fluorescence PCR instrument [11]. PCR process [11]. 10 μL was taken from the PCR reaction products, 2 μL 6X loading buffer was added and mixed into the sample of the 2% agarose gel, observed under UV lamp observation and took a picture.

Envision method was used; first, it was treated with poly-lysine slides, continuous paraffin sections of 4 μm, dried for 1 h. All the process was referenced from [12].

SPSS 13 software was used to analyse the relationship between HCCS1 (hVPS53) and MicroRNA 139-5p and clinicopathological features. 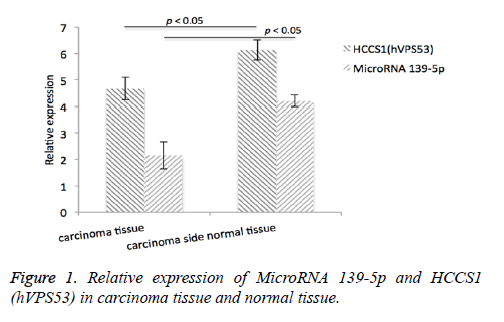 In this study, we analysed the relationship between the inactivation of HCCS1 and MicroRNA 139-5p in non-small cell lung cancer cells. In this research, we utilized several experimental techniques to detect the changes of HCCS1 gene expression in primary lung cancer tissues. The results showed that the majority of tumor tissues did not express HCCS1 protein, and HCCS1 methylation in the promoter region of LOH was the main mechanism of HCCS1 gene inactivation. Interestingly, we found that the level of MicroRNA 139-5p has the same tendency with HCCS1 changes.

HCCS1 (hVPS53) protein was found in the search of tumor suppressor genes, which has high homology with the homologous protein of Arabidopsis, yeast, nematodes, fruit flies and mice [13]. It was very conservative in evolution and plays a very important role in the process of life. When the human hepatoma cells were induced, the tumor cells were obviously inhibited and the tumor cells were inhibited in nude mice. Observation in hepatocellular carcinoma was detected in HCCS1 (hVPS53) expression was significantly lower than that of the adjacent tissues [14], liver specimens of HCCS1 (hVPS53) gene mutation, single nucleotide deletion, the deletion of exon deletion and localization caused by reading frame change. Overexpression of hVPS53 (HCCS1) with HCCS1 (hVPS53) gene replication defective recombinant adenovirus Ad-HCCS1 mediated high expression [15]. Cell viability test showed that HCCS1 (hVPS53) protein could significantly inhibit the growth of human hepatoma cells and human colon cancer cells [16].

The normal tissue had higher levels of HCCS1 (hVPS53), and cancer tissue had lower levels of HCCS1 (hVPS53), also think that HCCS1 (hVPS53) is a protective factor, this study further found that MicroRNA 139-5p in this process have the same phenomenon. It was found that the methylation level of MicroRNA 139-5p in cancer tissues was much higher than that in normal tissues. Therefore, inactivation of HCCS1 (hVPS53) gene may be related to the methylation of MicroRNA 139-5p. At the same time, the difference of mRNA and protein levels in cancer tissues and adjacent tissues was related to lymph node metastasis. The mRNA and protein levels of tumor with lymph node metastasis were lower than those in adjacent tissues (p<0.05). In this study, the number of cases of squamous cell carcinoma was much higher than that of adenocarcinoma and the relationship between the changes of HCCS1 (hVPS53) mRNA and protein level and the pathological type of tumor were not observed. The relationship between TNM and tumor grade and tumor grade was not observed. In addition, due to the limited number of samples, we need to analyse more samples to clarify the potential relationship among them.

This study was supported by Science Foundation of Shanghai Municipal Commission of Health and Family Planning (Grant No.20124350).