The abstract must include the following separate sections:

Background: Hydatid disease, which is caused by larvae of Echinococcus multilocularis. Is common in husbandry area. It’s serious disease to human that has a significantly high fatality rate. However, as a non-echinococcous endemic area, Guangxi has not reported on hydatid disease, and this first primary patient may provide new possible routes of infection and diagnostic ideas.

Case presentation: A brief description of the patient’s clinical and demographic details, the diagnosis, any interventions and the outcomes. The patient suffered from hypertension for 6 years and hypo tensors were used to control the blood pressure. In 2014, he was confirmed to have hepatic cyst. In December 2016, he had been hospitalized in the Department of Encephalopathy because of intracerebral haemorrhage, which led his left limb activities impaired. This patient reported a hepatic cyst detected by B-mode ultrasound during the physical examination 1 year ago. He did not pay close attention to it and did not receive any re-examination. Recently, B-mode ultrasound in another physical examination showed hepatic cyst (176 × 158 mm). No obvious abnormality was found in the gallbladder, pancreas, spleen and both kidneys. Computed tomography scan can be applied to examine all organs in human body and is an important diagnostic examination for echinococcosis.

One patient comes from RongShui County, Guangxi Zhuang Autonomous Regions. This patient was admitted to the hospital because he had a pain at the right upper-abdominal during six days. He suffered from hypertension for 6 years. During that period, his maximum systolic pressure was 200 mm/Hg and routinely he used to take oral Nifedipine sustained-release tablets, Enalapril dispersible tablets, and Betaloc tablets to control the blood pressure. In December 2016, he had been hospitalized in the Department of encephalopathy because of intracerebral haemorrhage, which led his left limb activities impaired. In 2014, he was confirmed to have hepatic cyst. Throughout that period, the patient did not seek for any systematic diagnosis and treatment. He admitted that he did not permanently reside in epidemic areas, and was not in contact with infested water in area where schistosomiasis is endemic. More so, he did not consume raw fish, or have a history of contacting industrial poisons, dust and radioactive substances. Physical examination revealed: Temperature, 36.5 ; Pulse, 58 times/min; Respiratory, 20 times/min and Blood pressure, 122/68 mm/Hg. His sanity was on the best side, no stained yellow on the skin or any signs of sclera, no swelling of superficial lymph nodes on whole body, and no cardiopulmonary abnormalities. The abdomen was flat, bilateral and roughly symmetric. In the bilateral abdominal wall, there was no varicose vein and peristaltic wave in the intestine. Abdominal examination showed tenderness, there was pain on pressure in the right abdomen, mainly on hypochondriac region, but without rebound tenderness. Murphy sign was negative (-). At the right subcostal area, three transverse fingers could touch a mass size of about 10 cm. It was presented as follows: medium texture, painful, clear border, smooth surface and good mobility, and the spleen weren’t felt. There was no evidence of fluid moving, no punch at hepatorenal region and the peristaltic sound was normal. The upper left arm muscle strength was at level lll, muscular tension had slightly increased. The left lower and right limbs muscle strength, and muscle tones were normal. Edema was not observed in both legs.

This patient reported a hepatic cyst detected by B-mode ultrasound during the physical examination 1 year ago which is shown in Figure 1. He did not pay close attention to it and did not receive any re-examination. Recently, B-mode ultrasound in another physical examination showed hepatic cyst (176 × 158 mm) which is sown in Figure 2. No obvious abnormality was found in the gallbladder, pancreas, spleen and both kidneys. 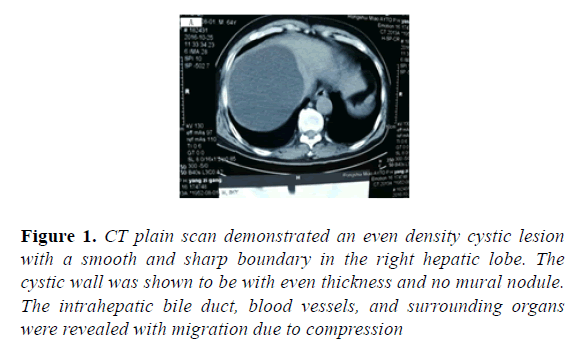 Figure 1: CT plain scan demonstrated an even density cystic lesion with a smooth and sharp boundary in the right hepatic lobe. The cystic wall was shown to be with even thickness and no mural nodule. The intrahepatic bile duct, blood vessels, and surrounding organs were revealed with migration due to compression 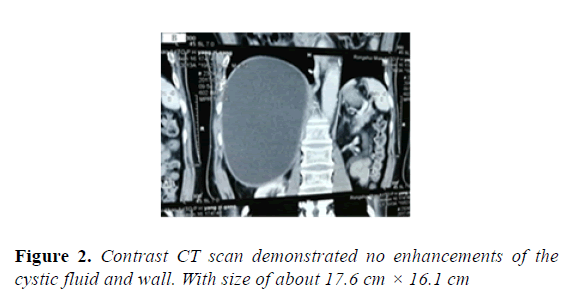 Figure 2: Contrast CT scan demonstrated no enhancements of the cystic fluid and wall. With size of about 17.6 cm × 16.1 cm

CT scan can be applied to examine all organs in human body and is an important diagnostic examination for Echinococcosis which is shown in Figure 3. Plain scan can help to locate lesions and demonstrate calcifications. Contrast scan can further demonstrate the radiological signs of its complications, define the range of alveolar Echinococcus cysts, and reveal small metastasis [2-10,17-20,26]. Take the hydatid cyst fluid examination during the surgerywe found a large number of protoscolex of cystic fluid from the etiological examination which is shown in Figure 4. 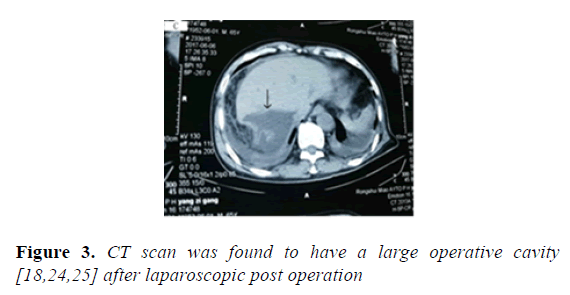 Figure 3: CT scan was found to have a large operative cavity [18,24,25] after laparoscopic post operation 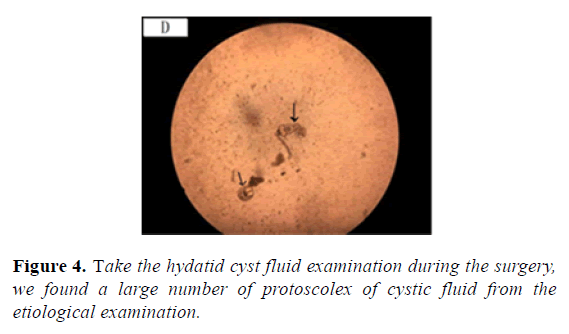 Figure 4: Take the hydatid cyst fluid examination during the surgery, we found a large number of protoscolex of cystic fluid from the etiological examination.

Cystic echinococcosis in the liver should be differentiated from the following diseases [10-16,23].

Non-parasitic cyst: Both simplex hepatic cyst and multilocular hepatic cyst are rarely accompanied by calcification, which is a key point for differential diagnosis. Hepatic echinococcosis is characterized by cyst-in-cyst sign, with daughter cysts mostly clinging to the internal wall of mother cyst.

Bacterial hepatic abscess: The internal density of hepatic abscess is uneven in most cases, with fluid-gas level within the lesion. Calcification and small vesicles are observable in its parenchymal part By contrast scan, no enhancements can be revealed within the lesion but obvious enhancements of the wall of hepatic abscess and the septa, with low density edema surrounding the abscess wall. In the cases of hepatic echinococcosis, the cystic wall showed no obvious enhancement by contrast scan, commonly with calcifi cation. And the lesion is commonly multiple, with other signs detectable in the surrounding hepatic tissues and abdominal cavity. In addition, hepatic abscess causes serious systemic toxic symptoms, with obvious increase of the WBC count but casoni test negative. The casoni test negative helps its differentiation from intrahepatic cystic echinococcosis.

Echinococcosis, also known as hydatidosis, mainly perils in husbandry areas. In this case, the patient’s history of living was not in a husbandry area, and the patient never left home, never been to hydatid disease epidemic area. So this is the first primary case of hydatid disease in the Guangxi Zhuang Autonomous Region. The CT scan demonstrated well-defined low density lesion in the liver, with no enhancement by contrast scan, which was considered to be a benign lesion. In combination with detected protoscolex, the diagnosis was defined to be cystic echinococcosis in the liver. The canine is one of the main hosts of the echinococcosis. Guangxi has the custom of eating dog meat; there are a lot of dogs running around, which is one of the possible factors of echinococcosis transmission. But we have not figured out how the animals in the non-endemic areas are suffering from hydatid disease. This is one of our next research directions.

There are too few existing samples to study more about the source of infection and the mode of transmission. We need to do more work to collect samples and understand the possible distribution and infection of echinococcosis in Guangxi from the living environment, lifestyle, eating habits, etc. Through the next studies, we hope that we can get the control strategies of echinococcosis which suitable in Guangxi.

We thank the anonymous peer reviewers for their critical and constructive comments that strengthened the presentation of this work.