Methods: We randomly selected 20 patients diagnosed with GC by clinical signs and symptoms, imaging diagnosis and laboratory diagnosis in department of general surgery in University Medical department Affiliated Hospital from January 2014 to December 2015. Gastric cancer tissues and adjacent tissues were studied with immuno histochemistry staining and the expression level of MAP4K4 level was detected postoperatively. The relationship between the MAP4K4 expression level and the clinical stage, pathological grade relationship was analysed. The Kaplan-Meier method was used to analyse the effect of MAP4K4 expression level on clinical outcome.

Gastric Cancer (GC) is one of the most common types of cancer and the second reason for cancer-related high mortality worldwide [1], as well as the fifth most common cancer [1]. The radical surgery usually has a poor prognosis coupled with unsatisfying treatment effect of molecular target [2], which also make the gastric cancer become one of the three major reasons for cancer related deaths in global [1-3].

MAP4K4 is another risk factor associated with gastric cancer discovered in recent years [4-6]. As a MAPK kinase isoform 4, it belongs to the Mitogen Activated Protein Kinase (MAPK) family. MAPK family is a conserved serine/threonine protein kinase system and plays a very important role in the process of extracellular signal delivering to cytoplasm [7]. MAPKs also play significant role in regulating and controlling the whole process of cell proliferation and differentiation, the main function of which includes the regulation of cell proliferation and apoptosis [8-10]. In addition, MAPKs can also take part in cell motility regulation, cytoskeleton, proliferation and rearrangement [11-14]. MAP4K4 gene can conduct over expression [15,16-18] in many types of human cancers. However, we found that in patients with gastric cancer, the expression level of MAP4K4 and its correlation with clinical prognosis is not clear, so we have conducted deep exploration on the expression level of MAP4K4 and its relationship with clinical prognosis in patients with gastric carcinoma [19].

We randomly selected 20 patients diagnosed with GC as case group by clinical signs and symptoms, imaging diagnosis and laboratory diagnosis in department of general surgery in University Medical department Affiliated Hospital from January 2014 to December 2015.

All the subjects needed fasting 8 h before blood test, and were collected ulnar venous blood under fasting on the next morning. In addition, the blood was sent to the Department of Biochemistry detection in our hospital within 2 hours by using Beckman CX9 automatic biochemical analyser (USA).

Before the examination, the patients received local anaesthesia and gastroscopy. Gastrointestinal endoscopy was checked before examination to determine whether the front of the lens can be manipulated for changing direction.

First H and E dyeing were conducted. Then we put sodium citrate buffer (pH 6.0) incubated at room temperature for 3% H2O2 for 5 to 10 minutes in order to eliminate the activity of endogenous peroxidase, and flushed it by PBS with 2 minutes/ time for 3 times. 10% normal goat serum was applied for sealing with incubation for 10 minutes at room temperature and 4°C for the whole night. PBS was used again for flushing; and dropped appropriate dilution ratio of biotin labelled second antibody (1% BSA-PBS used for diluting) with PBS for flushing, 2 minutes/time for 3 times. Then we dropped horseradish peroxidase labelled streptavidin (PBS used for diluting) and incubated at 37°C for 10-30 minutes; DAB coloration; Tap water flushed it fully, redyed, dehydrated till transparent state and sealed. Avdin was utilized to seal endogenous biotin. We heated and boiled the liquid in pot for antigen repair.

Statistical analysis was performed by the software SPSS 20.0, measurement data were presented by mean ± standard difference (X ± s), and count data by ratio, normal distribution statistical data by Analysis of Variance (ANOVA); non-normal distribution data between the two groups were compared by using paired t test and χ2 test, and Cox regression model was established for the risk factors related. In addition, we used the Kaplan Meier method for survival analysis and correlation analysis with P<0.05 considered as significant differences.

We did pathological typing statistics in the group of gastric cancer patients, of which we found that 6 (6/20) had squamous cell carcinoma, 12 (12/20) adenocarcinoma, and 2 (2/20) other pathological types, as shown in Table 3 and Figure 1. 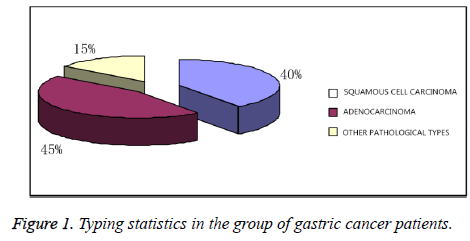 Figure 1: Typing statistics in the group of gastric cancer patients. 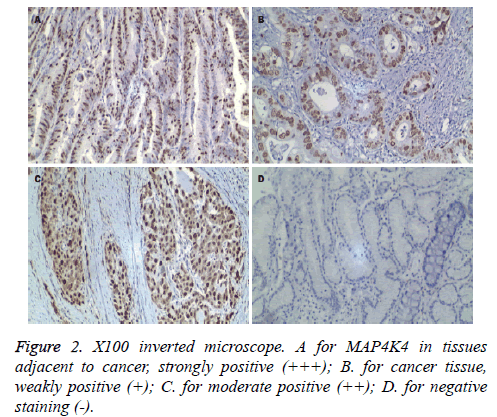 Regression analysis on kinds of influencing factors of prognosis

According to previous literature and reports, we pointedly selected pathological types relevant to gastric cancer expression. Moreover, we made univariate analysis on whether distant metastasis occurred, carcinoma tissue volume, recurrence situation, and patients’ age and weight, etc. discovering that level of MAP4K4 gene expression was correlated with lymph node metastasis and pathological staging of gastric cancer in cancer tissue (P<0.05). However, it had no relation to tumor size of gastric cancer and recurrence and metastasis, etc. (P>0.05), as shown in Table 4.

Table 4: Univariate analysis on kinds of influencing factors of prognosis. 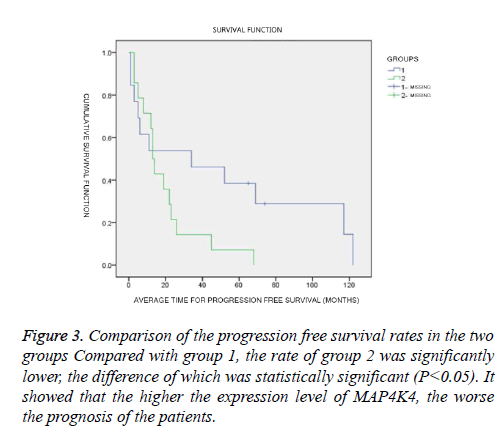 Figure 3: Comparison of the progression free survival rates in the two groups Compared with group 1, the rate of group 2 was significantly lower, the difference of which was statistically significant (P<0.05). It showed that the higher the expression level of MAP4K4, the worse the prognosis of the patients. 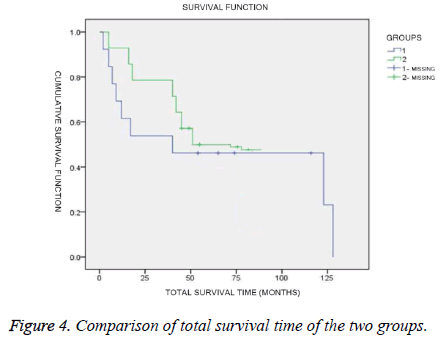 Figure 4: Comparison of total survival time of the two groups.

Compared with group 1, the time of group 2 was significantly lower, the difference of which was statistically significant (P<0.05). It showed that the higher the expression level of MAP4K4, the worse the prognosis of the patients.

Gastric cancer is ranked the top five in common cancers, and at present, in China's elderly patients over 60 years old, the morbidity of patients with gastric cancer has a increasing trend year by year. Due to symptoms of early gastric cancer are similar to that of gastritis, usually presenting gastralgia, stomach discomfort, acid reflux and other non-specific symptoms mainly. Therefore, the diagnosis of it is difficult, and it seriously affects the patient's quality of life. Thus, it has very important significance for understanding the clinical prognosis of patients and rationally using medical resources to conduct the diagnosis of gastric cancer and clinical prognostic analysis for patients.

MAP4K4 is abbreviation of MAPK kinase isoform 4, belongs to the Mitogen Activated Protein Kinase (MAPK) family. MAPK family is a conserved serine/threonine protein kinase system and plays a very important role in the process of extracellular signal delivering to cytoplasm [3]. The main function of MAPKs includes the regulation of cell growth, migration, differentiation, and apoptosis and stress related reactions [3]. Liu et al. used biological information analysis and quantitative polymerase chain reaction for detecting expression level of MAP4K4 in gastric carcinoma, and eventually found in gastric cancer, the expression level of MAP4K4 was significantly increased, the conclusion of which were basically similar to ours [20]. Using small interfering RNA to knock MAP4K4 genes in cancer cells, we found that the proliferation of gastric cancer cells received significant inhibition, and most cells stalled in the G1 period. The results showed that, after the silence of MAP4K4, the apoptosis of cancer cells could be induced and increased by raising the rate of Bax/Bcl-2. And previous studies on Bax/Bcl-2 showed that it played a main role in regulating cell proliferation and apoptosis [20].

The average ages of the patients were close to 60 years old, which was consistent with the age of high incidence in gastric cancer in China. Blood oxygen saturation of patients was (93.5 ± 9.8%), and red blood cell count (3.29 ± 1.27) × 109; haemoglobin (56.5 ± 12.7) g/L, which were lower than the normal reference values, which we thought was related to the cancer tissue invasion and anaemia caused by chronic consumption, and anaemia caused secondary decreasing of patients’ blood oxygen saturation. After screening, no collected patients with gastric cancer were found heart disease and lung disease, whose pulmonary functions were normal. The symptoms of anaemia may have relationship with patients’ primary gastric cancer diseases.

In addition, as also found in our study, in 20 patients, 9 (9/20) patients had a history of radiation exposure; 18 (18/20) patients Helicobacter pylori infection; 13 (13/20) cases family history; 14 (14/20) cases family history of gastric cancer; 7 (7/20) patients a history of smoking; 11 (11/20) cases a history of drinking; 8 (8/20) cases reflux esophagitis. 6 cases were squamous cell carcinoma, and 12 (12/20) cases were adenocarcinoma; 2 (2/20) cases other pathological types of. We further understood the patients’ medical history by questionnaires about them; COX regression analysis showed that the expression level of MAP4K4 gene in cancer tissues had something to do with lymph node metastasis and stage of gastric carcinoma (P<0.05), and nothing to do with tumor size and recurrence, metastasis, etc. factors of gastric cancer (P>0.05). This showed that the detection of MAP4K4 level in cancer tissues had certain implications for indicating the pathological types of patients and the risk degree of lymph node metastasis. The higher the malignancy degree of gastric cancer, the higher the expression level of MAP4K4. This was inseparable from the regulation function of MAP4K4, and after silence, the expression levels of Notch signalling pathway could be reduced, which activated Bax/Bcl-2 and started cell apoptosis.

Though further analysis by Kaplan-Meier on the relationship between expression level of MAP4K4 and median survival time as well as total survival time, we finally found that in group -~+, average time for progression free survival was (49.80 ± 14.42) months; median time (34.00 ± 27.56) months; and in group ++~+++, average time for progression free survival (19.57 ± 4.76) months, median time (13.00 ± 1.25) months. Comparing the progression free survival of the two groups, the difference had statistical significance (χ2=13.167; P=0.005). And in group -~+, the average total survival time was (65.00 ± 116.70 months), the median (50.00 ± 39.90) months, the difference of which was statistically significant (χ2=10.084; P=0.003). We believed that in the gastric cancer tissues, high expression levels of MAP4K4 usually indicated strong proliferation state and usually the higher the expression level of MAP4K4, the worse the prognosis or outcomes of patient, which were consistent with previous studies of gastric cancer. By detecting the expression level of MAP4K4 in cancer tissues of patients, it has a certain indicating function on the prognosis and survival situation of patients.

In summary, we believe that it has important theoretical and clinical significance to detect expression level of MAP4K4 in patients with gastric cancer for indicating patients’ survival and prognosis as well as severity of disease, which is also of some economic significance for tips on mortality risk in patients with gastric cancer, rational use of medical resources and reduction of the burden on the family.