The effect of crude oil spill on the surface water of the Lower Niger Delta (Sombriero River).

Crude oil spill on the ecosystem of the Niger Delta area of Nigeria had been on the front burner for over three decades. This article viewed crude oil spill impact on the physicochemical properties and heavy metals of the Sombriero river axis of Bille, Abonnema and Degema in March, 2018. Samples were collected from nine sampling points along the stretch of the river 500 meters apart each sampling point. The physicochemical parameters (pH, electrical conductivity, alkalinity, turbidity, total dissolved solids, total suspended solids, chloride, and ortho-phosphate and total hardness) were analyzed using APHA standard methods whereas the heavy metals (iron, zinc, copper, chromium, cadmium, nickel and lead) were determined with Atomic Absorption Spectroscopic method. The results got were compared with the baseline data from previous work published by the same authors. The results of the physicochemical properties and heavy metal concentrations showed effect of crude oil impact on the river due to corrosion of crude oil pipelines, sabotage (illegal refining), oil production operations and transportation of the crude oil products in jerry cans loaded in local wooden boats being ferried along the coastal river as some of the parameters were higher than the initial conditions of the river. Some of the heavy metals are carcinogens that affects human through the food chain. Therefore, crude oil spill on the river should be prevented.

The Niger Delta is an area of intensive and extensive crude oil exploration, exploitation and production and there are industrial installations like pipeline materials, flow stations, gas clusters and gas flaring sites; all of which have adverse impact on the environment [1]. Crude oil spillage is a major environmental problem associated with oil exploration and exploitation activities. It has also caused regional crisis in the Niger Delta in onshore areas where most pipelines and flow lines are laid above the ground. Pipelines which have an estimated life span of about fifteen years are old and susceptible to corrosion. Most of the pipelines are as old as twenty to twenty-five years. Even Shell Petroleum Development Company (SPDC) admits that ‘most of the facilities were constructed between the 1960s and early 1980s at the then prevailing standards’ [2]. The major impact of oil spills are destruction of farmlands, soil fauna and flora Figure 1a, poisoning of both surface and ground water Figure 1b, destruction of aquatic life and other economic livelihood [2]. 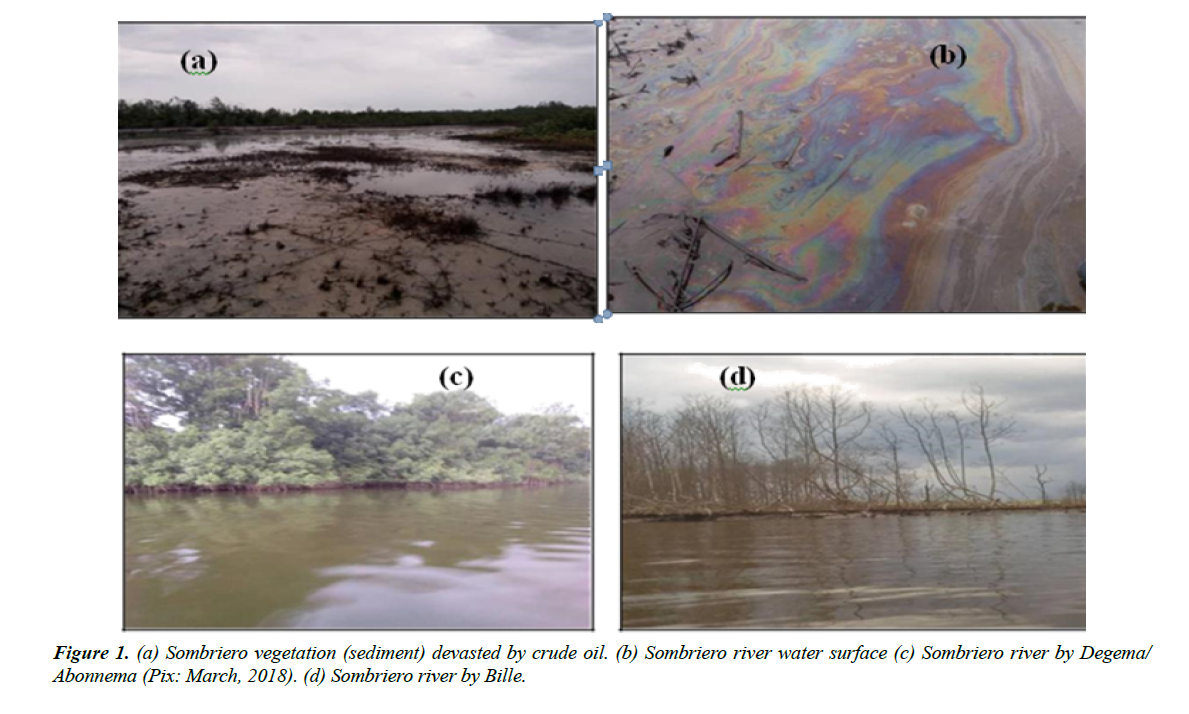 Crude oil spill can pollute streams and rivers and can have a devastating effect on the water environment by spreading over the surface in a thin layer Figure 1b that stops oxygen getting to the plants and animals that live in the water. It harms insect and animals such as periwinkles, crabs and crayfish; prevents photosynthesis in plants, disrupts the food chain and takes a long time to recover or remediate. Animals such as are particularly vulnerable [3]. Moreso, fishing which are the traditional occupation and the people’s source of income is being eroded as a result of crude oil spills. Many affected residents especially in the worst affected areas have not recovered from the loss of their livelihood and income from the effect of crude oil spill [4].

The Sombriero River drains the western part of Rivers state [5] and it is within the estuarine mangrove zone with tropical rain forest Figure 1 [6]. The vegetation of the Sombriero River is mangrove forest which is included in a highly complex trophic system [3] and fringes the river at the left and right banks consisting of mangrove trees (Rhizophora, Avicennia and Nypha fruticans) arising from a characteristic muddy substrate that produces a foul odour which once served as a source of both fuel wood for indigenous people and a habitat for biodiversity has now oil toxicity that had depleted and devitalize the ecology Figure 1c [2]. The volatile, quickly penetrating viscous properties of crude oil have wiped out large areas of vegetation. The loss of vegetation occurs when spill happens close to and within the drainage basin and the hydrologic force of both the river and tides forced spilled crude oil to move up into the areas of vegetation [7] but when it occurs near the shore, the whole adjourning district is invaded by nauseating pungent smell as air current carries volatile components for a distance. The risk of fire is also high as ship and boats that mowed near the habour are warned to leave the affected areas. Moreso, swimming and other recreational activities are suspended from the water body (river) due to the spill [8].

The physicochemical characteristics of water are vital as they may directly or indirectly affect its quality and subsequent suitability for the production and distribution of fish and other aquatic lives [9]. Also, the level of heavy metal toxicity on estuarine organisms affects the physicochemical composition of the ecosystem [10]. Hence, the essence is to compare the present results to the baseline data and deduce possible causes and how to prevent it.

Sombriero River is located across six (6) Local Government Areas of Rivers State (Akuku-toru, Degema, Asari-toru, Abua- Odual, Ikwerre and Emohua) between Latitude 4º 22' 47'' N and Longitude 6º 52' 20'' E. It is a distributary of the River Niger which drains into the Atlantic Ocean connected to other rivers via creeks in the coastal area of Niger Delta Figure 2 [5]. 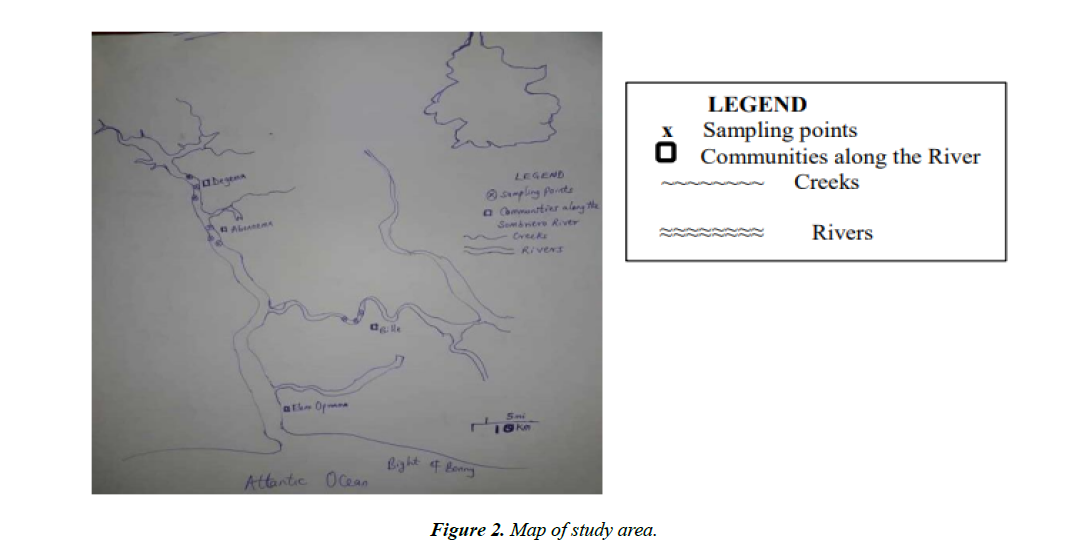 The sampling was carried out during the dry season of March 2018 in order to secure the river specific conditions rather than those modified by the rains (run-off) rainy season. The sampling points for each location were 500 meters apart- along the stretch of the Sombriero river axis of Bille, Abonnema and Degema. These sites were chosen because they are the frequently used transportation routes for ferrying crude oil. The composite samples were obtained by sampling from the entire sampling stations. The sampling containers used were washed, rinsed with 1M Nitric acid after which they were severally washed with demineralized water and finally with the sample solution before collection of samples for analysis. The samples were collected with a 2L plastic hydro bios water sampler and transferred to clean 2L polyethylene containers with screw caps. Samples used for heavy metals were preserved by the addition of 4mL concentrated nitric acid. All the samples were transported in an ice-chest to the laboratory and preserved in a refrigerator at 4ºC. The samples were analyzed within 24h of arrival.

The results of the physicochemical properties and heavy metal parameters of the Bille, Abonnema and Degema axis of the Sombriero River are presented in Tables 1 and 2 and Figures 3 and 4. The appearance/color of the water at Bille was darkish brown with hydrocarbons odour while at Degema/Abonnema was cloudy. The pH of the samples was within the specification as reported earlier [6]. The electrical conductivity as compared to 2010-2012 reduced significantly at Degema and Abonnema but was almost same for Bille location. This is in contrast with Ezekiel et al. 2011 who reported as high as 18730.58μS/cm. The alkalinity increased almost ten times as compared to the baseline report and it is not harmful to aquatic life and humans [11]. Turbidity, total suspended solids and total dissolved solids also increased exponentially as compared to baseline result. The chloride content and total hardness reduced significantly and minimally. This may be the reason why the electrical conductivity reduced as well. No significant difference observed in terms of phosphates and this is in agreement with [12]; that, the concentration of phosphate is low in surface waters.

The study provided information on the effect of crude oil spill in 2018 on the Sombriero River as compared to 2010, 2011 and 2012 with increased concentrations of alkalinity, turbidity, total suspended solids, total dissolved solids, Fe, Zn especially Cu and Cr that are carcinogenic which can affect humans through the food chain but showed relatively reduced concentrations of electrical conductivity, chlorides, total hardness and Pb which indicated that, the ions present in the water might have reacted with the crude oil. However, efforts should be geared towards ensuring that, the crude oil spills are prevented/reduced to the minimum by improvement of asset integrity management (routine testing and inspection, upgrade of flow station and facilities, replacement of flow line with defects), surveillance by host communities, awareness campaigns as to dangers involved in illegal bunkering, enhanced communities interactions and the presence of Military Joint Task Force.