A 40-year-old man presented with a gait disturbance and sensory ataxia. He was not an HIV carrier or homosexual. About 20 years prior, he noted skin lesions usually seen in early-stage syphilis, but did not receive adequate treatment. Magnetic resonance imaging of the spinal cord demonstrated increased signal intensity within the dorsal column on T2-weighted images, with longitudinal extension from C2 to T10, and without gadolinium-enhancement. These findings mimicked sub-acute combined degeneration. He was diagnosed as having neurosyphilis, as the criteria for syphilitic meningomyelitis were met, and was treated with the intravenous penicillin G potassium (24-million IU/day for 14 days). The initial treatment failed to relieve his neurological symptoms and abnormal spinal cord findings were observed 6 months later, despite improvement in cerebrospinal fluid rapid plasma regain level and Treponema pallidum hemagglutination assay titers. Providing young and sexually active people with appropriate information is a crucial public health measure to prevent progression of syphilis when treatment is not performed during the asymptomatic phase between early and late symptomatic phases.

Syphilis is a sexually-transmitted disease caused by Treponema pallidum. The pathogenesis has not been fully clarified. Generally, the infection is acquired through sexual contact with a person in the early stage of syphilis. Transmission occurs when T. pallidum is present in lesion exudate that enters the body through mucous membranes or damaged skin. Syphilis is divided into primary, secondary, latent and tertiary stages. Three to six weeks after exposure, an infected person usually develops initial sclerosis and a hard chancre at the infected site (primary symptomatic syphilis). During the latency period of a few weeks to months that follows, the bacteria spreads via blood circulation, and the infection becomes generalized, giving rise to rashes appearing on the skin or mucous membranes (secondary symptomatic syphilis). Primary and secondary symptomatic syphilis are collectively called early symptomatic syphilis. A few years to some decades after infection, gummas, neurological and/or cardiovascular symptoms characteristic of late symptomatic syphilis appear. Infected persons are often asymptomatic during the period between the early and late symptomatic phases, often resulting in delayed diagnosis and treatment. Neurosyphilis can be asymptomatic or cause different disorders, and is classified into several types based on the lesion in the spinal cord: Syphilitic meningomyelitis, syphilitic spinal pachymeningitis spinal vascular syphilis, syphilitic poliomyelitis, and tabes dorsalis. Neurological symptoms can appear in any stage of syphilis. During secondary syphilis lesion of the central nervous system develops in up to 40% of patients [1]. Subacute combined degeneration (SCD) of the spinal cord is a neurologic complication of vitamin B12 deficiency. The lesions of SCD include degeneration of myelin and axonal loss in the posterior and lateral columns of the spinal cord, typically beginning in the thoracic region and subsequently ascending or descending. The patient with SCD mainly presents with sensory ataxia due to dysfunction of the dorsal column [2]. We herein report a case of a patient who was neither an HIV carrier nor homosexual and had syphilitic meningomyelitis presenting with sensory ataxia mimicking SCD of the spinal cord on magnetic resonance imaging.

A 40-year-old man developed unsteady gait in September 2017. Because the gait disturbance was gradually progressive, he was able to walk unaided. He visited an orthopedist in November 2017. His essential neurological findings were profound sensory deficits of the bilateral lower extremities with a positive Romberg sign and urinary incontinence without loss of muscle strength in the upper and lower extremities. Cervical, thoracic, and lumbar X-rays demonstrated narrowing of the intervertebral space at T5/6, T10/11, and L5/S1. He consulted our hospital for evaluation and diagnosis.

He was unmarried, heterosexual, and had a history of contact with a sex worker when he was in his 20s. He went to an urologist due to a rash on his penis but did not receive adequate medication.

On admission, his body temperature was 36.2°C with a pulse rate of 65/min, a respiration rate of 13/min, and blood pressure 132/78 mmHg. His height was 170 cm and his weight was 82 kg. Physical examination showed no specific findings. Three months after onset of unsteady gait and urinary incontinence, a detailed neurological evaluation identified lightning-like severe pain in both legs and buttocks, dysesthesia, decreased sensation to pin-prick in the bilateral distal lower extremities, profound sensory deficits, total loss of vibratory sensation, severely impaired proprioception in the bilateral lower extremities to the level of the iliac crests, a gait disturbance due to sensory ataxia, diminished deep tendon reflexes in all four extremities, and impaired urination and impotence, but no Argyll-Robertson pupils, loss of muscle strength in the upper and lower extremities, or Babinski and cerebellar signs. The patient could barely walk unsupported.

Total spine and spinal cord magnetic resonance imaging (MRI) demonstrated increased signal intensity within the dorsal column on T2-weighted images from C2 to T10 (Figure 1) without gadolinium-enhancement, suggestive of longitudinally extensive myelitis. MRI findings of the brain were within normal limits. The urine was normal as were the results of routine hematology and blood chemistry. Lumbar puncture was performed. The cerebrospainal fluid (CSF) showed pleocytosis of 71 cells/mm3, with predominance of lymphocytes (69 cells), and an elevated protein level (0.86 g/L). Serological tests for syphilis were performed. The rapid plasma reagin (RPR) was positive (+) and the T. pallidum hemagglutination assay (TPHA) was positive (+). The TPHA (C. O. I) was 683.90, the TPHA IgM-fluorescent treponemal antibody (FTA) test was positive (2+), and the fluorescent treponemal antibody absorption (FTAABS) test was positive (3+). The CSF RPR was positive (×4), and the CSF TPHA was also positive (×2,560). No malignant cells were detected, and oligoclonal bands were detected in the CSF. The HIV enzyme-linked immunosorbent assay was negative and serum vitamin B12 level was within normal limits. The levels of soluble interleukin-2 receptor and angiotensinconverting enzyme were within normal range. Autoantibodies against aquaporin-4, antinuclear antibodies, and anti-SSA and -SSB were negative. The patient was seronegative for both myeloperoxidase-antineutrophil cytoplasmic antibody (ANCA) and proteinase 3-ANCA. 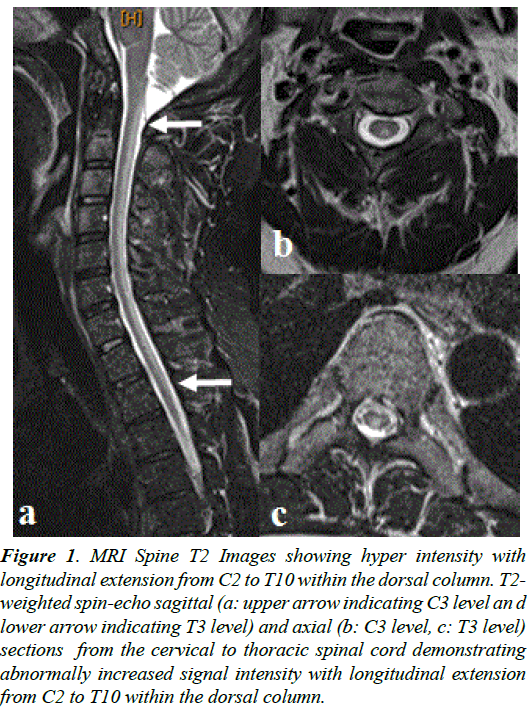 He was diagnosed as having neurosyphilis, and met the criteria for syphilitic meningomyelitis. He was treated with intravenous penicillin G potassium (24-million IU/day for 14 days). The initial treatment failed to relieve his neurological symptoms and abnormal spinal cord findings were observed 6 months later despite improvement in the CSF RPR and THPA titers (Table 1).

The patient, who was neither an HIV carrier nor homosexual, was diagnosed with tabes dorsalis, specifically syphilitic meningomyelitis with longitudinally extended spinal cord lesions mimicking SCD on MRI. He had noticed the initial dermatological findings usually seen in early-stage syphilis, but did not receive adequate treatment. He had presumably been in the latent stage of syphilis before presenting with myelopathy. The spinal cord involvement in neurosyphilis is classified into three clinical subtypes including meningomyelitis, meningovascular disease, and tabes dorsalis [3]. The pathogenesis in this case was considered to be meningomyelitis based on the clinical course and pleocytosis with elevated total protein levels in the CSF. It is interesting to note that the patient’s MRI features in the spinal cord demonstrated increased signal intensity within the dorsal column onT2-weighted images, with longitudinal extension from C2 to T10 without gadolinium-enhancement. In HIV carriers, longitudinally extended spinal lesions including transverse myelitis [4] and incomplete Brown-Séquard syndrome [5] on MRI have been reported in syphilitic myelitis. However, it is rare for MRI to demonstrate longitudinally extended spinal cord lesions mimicking SCD in a non-HIV carrier, as in this case [6,7]. The characteristic MRI features of syphilitic meningomyelitis are reported as having a “guttering candle appearance” and a “flip-flop sign” [8,9]. On the other hand, the lesions of SCD include degeneration of myelin and axonal loss in the posterior and lateral columns of the spinal cord, typically beginning in the thoracic region and subsequently ascending or descending [2]. A long segment of the thoracic cord is usually involved in syphilitic meningomyelitis. T. pallidum might invade the spinal cord via the vessels and meninges, leading to parenchymal inflammation and break-down of the blood-spinal cord barrier [8,9]. The gadolinium enhancement seen on MRI, which had not been demonstrated in this case, might represent meningeal inflammation and spinal cord ischemia or edema secondary to meningovascular syphilis. The reason for failure to treat his symptoms and MRI findings might be due to the belief that the clinical course of his syphilitic meningomyelitis was too advanced to treat, and because the late symptomatic phase of myelopathy was not active prior to treatment, but instead chronic. In recent years, increased incidence of asymptomatic and early symptomatic syphilis has been reported not only in Japan [10,11], but also in other countries. Providing young and sexually active people with appropriate information is a crucial public health measure to prevent progression of syphilis when treatment is not performed during the asymptomatic phase between early and late symptomatic phases.