Surgical treatment for 76 patients with posttraumatic osteomyelitis of the tibia

This study aimed to assess the methods and curative effect of surgical treatment for post-traumatic osteomyelitis of the tibia. From March 2005 to June 2012, a total of 76 patients (49 male patients and 27 female patients) with posttraumatic osteomyelitis of the tibia were enrolled. Among the 76 patients, 9 patients were treated with infection elimination and bone graft surgery of vancomycin-loaded calcium sulphate; 60 patients with bone and soft tissues defect were treated with infection elimination, flap graft surgery and vancomycin-loaded calcium sulphate; 7 patients were treated with infection elimination and bone transport. 6 cases of transplanted flaps necrotized partly after the surgeries, but the wounds healed after dressing changing or skin grafting; 4 cases of sinus recurred, and the patients were cured by reoperations. All the patients were followed up with the average period of three years, with the recurrence rate of 5.2% and cure rate of 94.7%. Taken together, after the thorough debridement, applying microsurgery techniques of flaps combined with bone graft of vancomycin-loaded calcium sulphate, could obtain satisfactory surgical results.

With the development of construction and transportation industry in recent years, open tibio-fibula fractures combined with skin soft tissue defects, or inappropriate handling of internal fixation for closed fractures, usually cause traumatic osteomyelitis, and which is one of the current challenging problems that the orthopedists are facing. At present, there were only a few related studies on this topic and no standardized therapeutic regimen has been proposed. Considering the current problems, 76 patients with posttraumatic osteomyelitis of the tibia had received different surgical treatment according to their different infected focuses and bone soft tissue defects in our department. All the surgical treatment had reached satisfactory curative effect, and the conclusion was summarized below. These findings might help optimize the current treatment for such disease.

From March 2005 to June 2012, 76 cases of patients with posttraumatic osteomyelitis of the tibia had received surgical treatment. Among the 76 patients, 4 of the patients received their first surgery in our department, and other 72 patients received first surgery in other hospitals; their infection course was from 26 days to 16 years, with an average of 3 months. All the patients gave their written informed consent and this study was approved by the ethic committee of our hospital.

All the 76 patients have medical history of traumatic fractures and related surgery. 11 patients of the 76 suffered osteomyelitis after their surgery of closed tibial fractures, and the symptoms of osteomyelitis showed as repeated inflammation and formation of fistula near the surgical sites. 65 patients were with open fractures combined skin soft tissue defects, and their symptoms were mainly showed as exposure of fracture ends and the internal fixation, inflammation of surrounded soft tissues, and purulent secretion.

After their admission to hospital, all the patients had been taken routine examination of blood tests, erythrocyte sedimentation rate (ESR) and hypersensitive C-reactive protein (hs-crp). Before the surgery, patients with wounds had been taken for regular bacterial culture and drug sensitive tests. According to the results of wound bacterial culture, 7 cases of wounds were without any bacteria, 26 cases with Staphylococcus aureus, 12 cases with Pseudomonas aeruginosa, 9 cases with Staphylococcus epidermidis, 9 cases with Enterobacter cloacae, 4 cases with Enterococcus faecalis, 3 cases with Escherichia coli, 1 case with A. calcoaceticus-A. baumannii complex, and 6 cases with more than two bacteria.

All the patients were examined with X-ray examination and CT, and the patients without internal fixation were examined with MRI. X-ray examination is one of the routine examinations, which mainly examines the position of fracture ends and the healing state of fractures; CT scan and 2D/3D reconstruction further asses the size of bone defects and find the necrotic bones; MRI examination for patients without internal fixation detects the infected focus inside medulla of tibia and its surrounded inflammation in soft tissue. 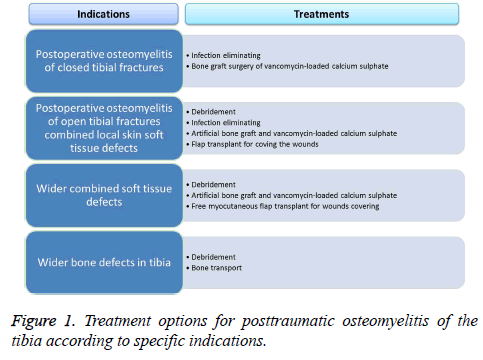 Figure 1: Treatment options for posttraumatic osteomyelitis of the tibia according to specific indications. 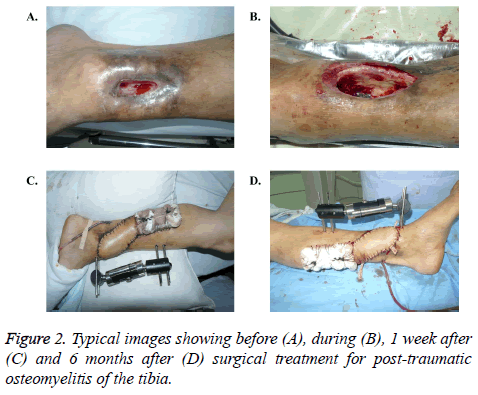 Figure 2: Typical images showing before (A), during (B), 1 week after (C) and 6 months after (D) surgical treatment for post-traumatic osteomyelitis of the tibia.

After the surgical treatment, all patients had taken 4 to 6 weeks’ antibiotic therapy. Besides that, the patients who received flap surgery had taken anti-inflammatory and antiossification therapy, and had been closely observed toward their blood circulation changes and received timely symptomatic treatment. After the patients’ discharge from hospitals, they had been required to take regular reexaminations and receive guidance of recovery exercise after their discharge from hospitals.

The criterions of cure of posttraumatic tibial osteomyelitis are listed below: no inflamed hot pain and purulent secretion around the local focuses; the indicators of blood tests, are normal; and X-ray examination shows that infected nonunion are healed [1,2].

Among the patients who received surgical treatment of debridement, infection eliminating, artificial bone graft and flap transplant for wounds covering, 6 patients’ transplanted flaps necrotized partly after the surgeries, but the wounds healed after dressing changing or skin grafting; 4 patients’ sinus recurred, but were cured by re-debridement and reoperation of bone transplant. According to the follow-up result, the recurrence rate is 5.2% and the cure rate is 94.7%; the patients with osteomyelitis of proximal joints were left different levels of functional disturbance, while the patients with posttraumatic osteomyelitis of middle tibia had a satisfactory recovery of affected limb function (Table 1).

Difficulties in treatment of posttraumatic osteomyelitis of the tibia

Posttraumatic osteomyelitis of the tibia is one of the challenging problems for orthopedists, especially for that which usually combined with soft tissue defects; the main difficulties of its treatment include the tibial bone defects which occurred after the debridement and soft tissue covering problems. There were several traditional treatments, which mainly listed as following three: 1) Infection eliminating after the debridement, then bone graft surgery after the infection was controlled; 2) Infection eliminating, autologous micromorselized bone graft combined flap transplant; 3) Bone transplant techniques for treating osteomyelitis with wide bone defects [2,3]. All the treatments have their own advantages and disadvantages, for instance, the treatment of infection eliminating and bone graft surgery is easy to operate, but it requires long hospital stays, and the wounds are covered by scars, which can lead to repeated inflammation.

Thorough debridement is the key factor of success surgery. In the debridement, the necrotic skin soft tissues, sinuses, scars which closely covered the bone, inflammatory granuloma and other necrotic tissues should be cleaned thoroughly; the sequestrum and sclerosis bone should be resected; the bone surface should be grinded to blood oozing; and the closed medullary cavities should be reamed. The sign of thorough elimination of infected focuses is fresh blood oozing from soft tissues and bone wounds. For patients with internal fixations, whether to take out the fixations during the debridement is still in controversy. The authors believe that, from the aspect of controlling infections, it is better to take out the internal fixations to prevent infection recurrence (caused by bacteria which stick to the internal fixations) after the surgery; however, for the patients with non-united fractures for 3 months, fracture stability should be taken into consideration when remove their internal fixations, it is necessary to apply external fixation (circular external fixation) to these patients to keep the fracture stability.

The advantages and disadvantages of bone graft surgery of vancomycin-loaded calcium sulphate. As for introducing antibiotics in treatment of osteomyelitis, the 4 to 6 weeks’ systematic antibiotics therapy for osteomyelitis has been widely accepted. However, it is hard for the antibiotics to reach the infected local, since the infected focuses of osteomyelitis are usually wrapped by sclerosis bones and relative ischemic bones, and are also covered by thickened periosteum and scarred muscle subcutaneous tissues. To solve the problem, while introducing systematic antibiotics therapy, vancomycinloaded calcium sulphate should be applied in bone defects local as drug delivery system after a thorough debridement of the infected focuses.

This treatment has 4 advantages [4]: 1) High concentrations of antibiotics could be put in the exact infected focuses; 2) The antibiotics concentration peak of local could be reached rapidly; 3) The antibiotics dosage would not bring side effect to important organs, since the total dosage and the dosage which circulates in the blood are less than that of the whole body; 4) The antibiotics could directly act on the infected focuses, and the ischemia of the infected local would not influence the curative effect. It should be paid attention that the bone graft of vancomycin-loaded calcium sulphateloaded could only act as the antibiotic carrier but could not ossify itself; therefore, the treatment of bone defects requires combining autologous cancellous bone graft. If the length of the bone defects is more than 4 cm, the bone transport technique could be applied, and it would receive satisfactory curative effect [5].

The posttraumatic osteomyelitis of the tibia usually combined skin soft tissue defects, which made it harder to treat. Thus, the flap transplant and other microsurgical techniques should be fully applied in treatment, for that the microsurgical techniques still plays an irreplaceable role in treating posttraumatic osteomyelitis of the tibia.