Significance of TLR4, MyD88 and STAT3 expression in colorectal cancer

Objective: The aim of this study was to investigate the expression status of toll-like receptor 4 (TLR4), myeloid differentiation primary response protein 88 (MyD88) and signal transducers and activators of transcription 3 (STAT3) in colorectal cancer (CRC) by immunohistochemistry (IHC), and explore the relationship between their expression and clinicopathological features.

Materials and Methods: Expression of TLR4/MyD88/STAT3 was detected using IHC staining in 20 colorectal adenomas, 40 CRC samples and 40 matched non-tumor tissues, and the correlations between their immunoscores and clinicopathological variables were analysed.

Conclusion: The overexpression of TLR4/MyD88/STAT3 proteins may play an important role in the pathogenesis of CRC.

Colorectal cancer (CRC) is the third most commonly diagnosed cancer in males and the second in females, with over 1.3 million new cancer cases and 693,900 deaths estimated to have occurred in 2012 [1]. Over the recent decades, the incidence of CRC has been increasing dramatically in several developing countries and has attracted wide attention [2-5]. The theory of adenoma-carcinoma sequence is now accepted as the mechanism of CRC [6]. While many of the oncogenes and tumor suppressor genes that are involved in the occurrence and progression of CRC have been identified, the molecular mechanisms of CRC has not been fully determined.

Toll-like receptors (TLRs) is a type I transmembrane receptor that was originally identified in Drosophila for its involvement in embryo development [7]. They act as pathogen recognition receptors and play key roles in both innate and adaptive immune responses [8]. There are 10 human isoforms of TLRs (TLR1 to 10) have been identified. Human TLRs are expressed in various cell types, including immune cells, intestinal epithelial cells and tumor cells [9,10]. TLR4 is the best characterized pathogen recognition receptor. There is increasing evidence suggests that TLR4 plays important roles in cancers [11]. TLR4 specifically binds to an adaptor molecule, myeloid differentiation primary response protein 88 (MyD88), resulting in the production of proinflammatory cytokines, such as IL-6 or TNF. Current studies suggest MyD88-dependent signaling has been shown to be critical for oncogenesis and tumor progression, such as lymphoma and hepatocellular carcinoma [12,13].

Signal transducers and activators of transcription (STATs) are cytoplasmic transcription factors, and STATs are key mediators of cytokine and growth factor signalling pathways [14]. STAT3 is a member of the STATs family and is also a target gene of TLR4/MyD88 signaling [15,16]. In addition, prolonged activation of STAT3 plays a significant role in promoting development and progression of many cancers, such as lung cancer, hepatocellular carcinoma and breast cancer [17].

Currently, few studies have been published on the relations between TLR4/MyD88/STAT3 expression and clinicopathological characteristics in CRC patients. In this study, we investigated the expressions of TLR4, MyD88 and STAT3 in colorectal adenomas, CRC and peritumoral tissues by performing IHC and we evaluated the relationship between these proteins and the clinicopathologic factors.

We obtained colorectal adenomas from 20 patients and tumors and peritumoral colorectal tissues from 40 CRC patients who had undergone endoscopic resection or surgery at the Central Hospital of Wuhan in 2016. None of the 40 CRC patients had received chemotherapy or radiotherapy prior to surgery. Tissue samples were collected immediately following endoscopic resection or surgery. The non-malignant colorectal tissues were at least 2 cm in distance from the tumor margin. The tissue samples were fixed in 4% paraformaldehyde and embedded in paraffin for histopathological diagnosis and immunohistochemical staining. The diagnoses were confirmed by histopathological study. Detailed clinical and histopathological information was collected based on case records and pathologic reports. Table 1 shows the general clinicopathological features of these 40 patients with CRC. Tumors located proximal to the splenic flexure were considered proximal, whereas those located after the splenic flexure were distal. Tumor staging was determined by the TNM Classification (7th edition) of the American Joint Committee on Cancer (AJCC) [18]. The present study was performed according to the guidelines of the Ethics and Research Committee of the Central Hospital of Wuhan and approved in accordance with the ethical standards of the World Medical Association Declaration of Helsinki.

Each slide was evaluated independently by two observers who were blinded to clinical data. The immunostaining score of TLR4, MyD88, and STAT3 proteins was assessed by the percentage of positively stained tumor cells as described earlier: 0, no positives staining; 1, 1-25% cells positive; 2, 26-50% cells positive; 3, 51-75% cells positive; 4, 76-100% cells positive [19,20]. Specimens with scores ≥ 2 were labeled as ‘positive (+)’. The staining areas were imaged with a BX51 model light microscope (at x200 and x400 magnification; OLYMPUS Corporation, Tokyo, Japan).

Data were presented in terms of mean ± standard deviation, percentage and the number of cases. The analyses that compared the expressions of TLR4, MyD88 and STAT3 between adenoma, tumor and peritumoral tissues were performed using Kruskal-Wallis test. The relationships between the levels of three proteins expression and the various clinicopathological parameters in CRC were determined by Fisher's exact test. Correlations were calculated using the Spearman's rank correlation coefficient. P-value <0.05 was considered to indicate a statistically significant difference in all tests. All statistical analyses were performed using SPSS version 17.0 (SPSS, Inc., Chicago, IL, USA) and GraphPad Prism version 5.0 (GraphPad Software Inc., San Diego, CA, USA).

The expressions of TLR4, MyD88 and STAT3 in colorectal adenoma, CRC and peritumoral colorectal tissues 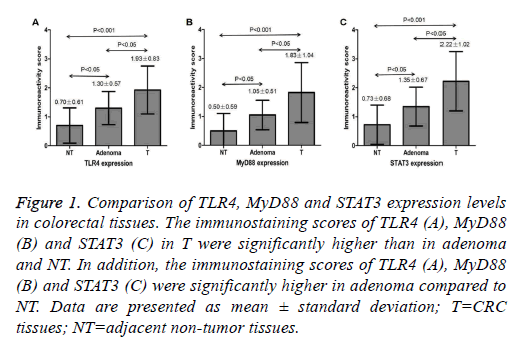 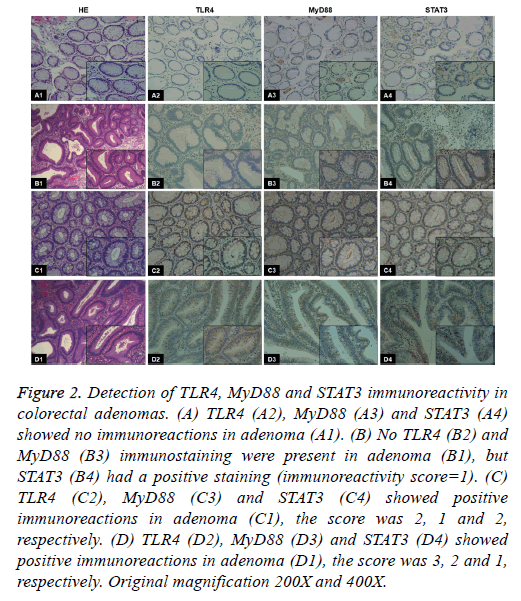 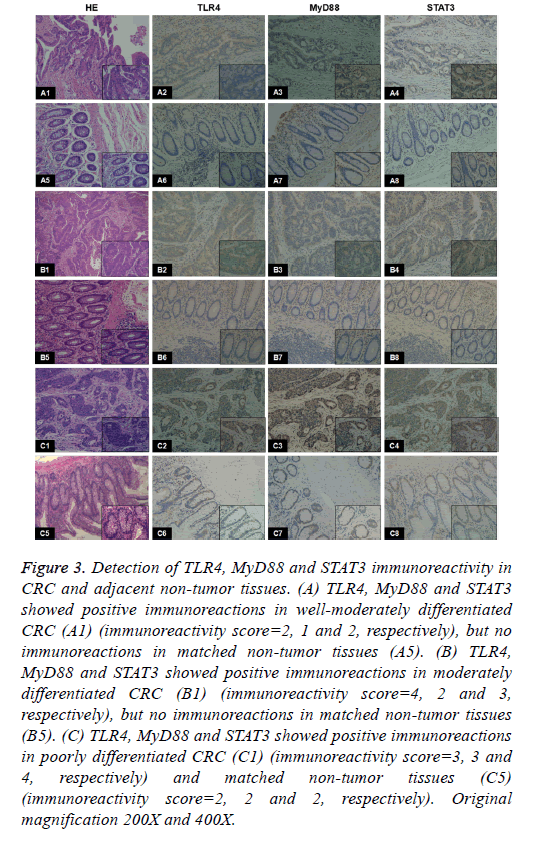 Correlation among TLR4, MyD88 and STAT3 expression in CRC

Table 2. Correlation among TLR4, MyD88 and STAT3 in CRC tissues

Relationship between clinicopathological features and expression of TLR4, MyD88 and STAT3 in CRC

Table 3. Relationship between clinicopathological features and expression of TLR4, MyD88 and STAT3 in CRC tissues.

In recent years, there is increasing evidence that TLR4 signaling pathway is involved in tumorigenesis [11]. MyD88 plays a critical role in TLR signaling. Some experimental studies have identified the contribution of TLR4/MyD88 signaling to tumor development and progression [21-23]. In this study, we observed that TLR4 and MyD88 signaling factors were highly expressed in CRC compared with adjacent non-tumor tissues and adenoma, and this result was near to Wang et al. who found that TLR4 and MyD88 immunostaining was absent or very weak in normal mucosa and adenoma, but a higher proportion of CRC cases showed positive expression of TLR4 and MyD88 [21]. Similar result had been reported in breast cancer by Chen et al. [22]. A correlation between TLR4 and MyD88 expression was detected. This agreed with Wang et al and also agreed with Kim et al. who found that there was a positive correlation between the expression of TLR4 and MyD88 in CRC and ovarian epithelial cancer (OEC) through IHC, respectively [21,23]. Collectively, our study provided us with preliminary results on the possible involvement of TLR4/ MyD88 signaling pathway in pathogenesis of CRC.

In the present study, there was a statistically significant association between TLR4 positivity and LNM. This result agreed with Ehsan et al. who found that the incidence of LNM was higher in patients with high TLR4 expression in the breast tumor cells [24]. Moreover, we noted that the expression level of TLR4 tended to be higher in poorly differentiated and advanced tumors, and this result agreed with Wang et al. who found that TLR4 expression was significantly associated with TNM stage in CRC [21]. Similar result had been reported in breast cancer by Chen et al. [22]. These findings indicated that increased TLR4 expression in CRC might be associated with tumor progression.

The current study showed that MyD88 positivity was significantly associated with LNM and TNM stage. This agreed with Chen et al, who found that the expression of MyD88 was significantly associated with axillary LNM and tumor staging in breast cancer [22]. Moreover, in the present study there was a statistically significant association between high expression of MyD88 and histological grade. This result was similar to Wang et al. who found that MyD88 expression had a significant association with differentiation grade in CRC [21]. Similar result had been reported by Kim et al. who found that there was a significant correlation between MyD88 expression and tumor stage and MyD88 was an independent prognostic predictor in OEC [23]. Our findings suggested that MyD88 may partially contribute to the progression of CRC.

Our results showed that the expressions of TLR4, MyD88 and STAT3 were increased in CRC as compared with the expressions in colorectal adenoma and adjacent normal mucosa, and the staining intensity was increased with the progression from adenoma to CRC. The results suggested that these proteins may play a driving role towards colorectal carcinogenesis with the progression from adenoma to carcinoma. Especially, our study found that the expression of TLR4, MyD88 and STAT3 was positively correlated with each other in CRC tissues. Further data analysis showed that all these three proteins had correlation with lymph node metastasis in CRC. Evidence from the literature and our findings indicated that the expression of TLR4, MyD88 and STAT3 may be interdependent, and that each has their own role and prognostic value in CRC; elevated these three proteins expression may partly contribute to the development and progression of CRC.

The limitations that we faced in the current study were the small number of CRC cases as they were 40 cases only, also the association between TLR4/MyD88/STAT3 signaling and cancer mortality has not been investigated in clinical samples.

Our study revealed that TLR4, MyD88 and STAT3 were overexpressed in the tumor cells of CRC using IHC and these proteins expression was significantly associated with lymph node metastasis. It is now more evident that TLR4/MyD88/ STAT3 proteins may be one of the major signaling factors involved in the pathogenesis of CRC. However, further investigation is required to identify the detailed mechanisms of these proteins in colorectal carcinogenesis.

This study was funded by a grant from the Research Funding for Health and Family Planning Commission of Wuhan Municipality (grant no. WX16D38).