Oxidative stress contributes to the cascade, leading to dopamine cell degeneration in Parkinson's dis-ease (PD). However, oxidative stress is intimately linked to other components of the degenerative proc-ess, such as mitochondrial dysfunction, excitotoxicity, nitric oxide toxicity and inflammation. It is therefore difficult to determine whether oxidative stress leads to, or is a consequence of, these events. Oxidative stress was assessed by estimating lipid peroxidation [LPO] product in the form of thiobarbi-turic acid reactive substances [TBARS], and nitric oxide. Enzymatic antioxidants like superoxide dis-mutase [SOD], glutathione peroxidase [GSHpx], catalase, ceruloplasmin and non enzymatic antioxi-dant vitamins e.g. vitamin E,C in either serum or plasma or erythrocyte in 22 patients of Parkinson's disease [PD] in the age group 45-75 years. Trace elements e.g. copper, zinc and selenium were also es-timated. Plasma TBARS and nitric oxide levels were Significantly high but activity of SOD, GSHpx, catalase, and levels of ceruloplasmin, vitamin-E, vitamin-C, copper, zinc and selenium were signifi-cantly low in Parkinson's disease when compared with control groups. Present study showed that im-balance between free radicals and antioxidants may be playing a role in dopaminergic neuronal loss in substentia nigra pars compacta and involved in pathogenesis of the Parkinson's disease.

Recent advances in both molecular genetics and neuro-chemistry have shown involvement of excitotoxicity and oxidative stress in cell death [1]. Parkinson's disease is pathologically characterized by loss of catecholaminergic neurons in the brainstem. Number of biochemical proc-esses involved in pathogenesis and progression of neuro-logical disorders. The concept of oxidative stress and an-tioxidants may be directly or indirectly involved in the pathogenesis of Parkinson's disease [2-4].

Number of studies showed that oxidative stress damages neurons by free radicals and play an important role in substentia nigra [8,9]. Antioxidant substances have role to protect cell from pathogenic oxidation. Enzymatic anti-oxidants like superoxide dismutase, glutathione peroxi-dase, glutathione reductase and catalase, and non enzy-matic antioxidants ceruloplasmin, vitamin A, vitamin E and vitamin C. Trace elements are required in a small concentration for activation of antioxidant enzymes. Con-sidering all these facts we planned to study certain rele-vant biochemical parameters for understanding the patho-genesis of Parkinson's disease.

The present study was carried out with 22 clinically ex-amined Parkinson's disease patients ranging in age group 45-80 years, admitted in Govt. Medical College Hospital Miraj. Patients having obvious malignancy, hepatic, renal, or cardiac disease and addiction history of alcohol or smoking were excluded from the study. Patients with co-existing neurological disorder like Alzymer’s disease, cer-ebral ischemia injury (strokes) or any kind of neuro defi-cit were also excluded.

Written consent was obtained from patients as well as controls. Diagnosis of Parkinson's disease was done by physicians and confirmed by senior neurologist of gov-ernment medical college; hospital Miraj. Age and sex matched 22 normal healthy persons as per IFCC guide-lines were included by excluding history of alcohol or smoking as control subjects.

Fasting blood samples were collected under sterile condi-tion from healthy controls and Parkinson's disease pa-tients, just before starting any drug treatment. 8 ml blood was taken in EDTA vials and 5 ml in plain bulbs; plasma was separated for the estimation of TBARS were esti-mated in plasma as described by Buege JA.[10] employ-ing MDA as a reference standard. Concentration of vitamin E was estimated in plasma according to the method of Beaker and Frank [11].

Concentration of vitamin C was estimated in plasma by method of Natelson [12]. Levels of Ceruloplasmin were estimated by colorimetric method by Karl [13]. Erythro-cytes were washed with cold isotonic saline and used for estimation of SOD, GSHpx, and catalase. SOD was assa-yed in RBC according to Kono method [14]. GSHpx was assayed in RBC by method of Beutler. Duron, Kelly [15] Catalase was estimated in erythrocytes hemolysate, accor-ding to method of Aebi [16]. Sera were separated and used for nitric oxide (nitrate + nitrite).Serum nitric oxide was estimated as the stable breakdown products, nitrate and nitrite by Cortas and Walkid [17]. Serum Copper, Zinc and Selenium levels were estimated by Atomic Ab-sorption Spectrophotometer (AAS), Parkin Elmer model -3030.

In comparison to the control group, plasma levels of TBARS, nitric oxide were significantly raised where as erythrocyte SOD, GSHpx and catalase activities were sig-nificantly lowered in the patients of Parkinson’s disease.
Levels of vitamin E & vitamin C in plasma and serum Ceruloplasmin, copper, zinc & selenium were significan-tly lowered in comparison with control groups.

Free radicals have been accepted into the biochemical and medical orthodoxy. Their existence and importance in liv-ing systems was ignored. Oxidative stress has been impli-cated in the pathophysiology of many neurological disorders [18-20].

Thiobarbituric acid reactive substances, the indicator of lipid peroxidation were significantly elevated in Parkin-son’s diseases (Table 1). In Parkinson's disease the me-tabolism of dopamine by action of enzyme monoamine oxidase is accelerated and excessive formation of hydro-gen peroxide (H2O2) takes place. In subsequent reactions of H2O2 hydroxyl radicals are generated. As per reports, the activity of monoamine oxidase is increased in Parkin-son's disease.[21]. This increased activity of monoamine oxidase may further metabolize dopamine to produce excessive formation of hydrogen peroxide. The polymeri-zation of auto-oxidative products of dopamine may lead to the formation of characteristic pigmentation of the sub-stantia nigra. These released free radicals might be re-sponsible for the loss of dopaminergic neurons. 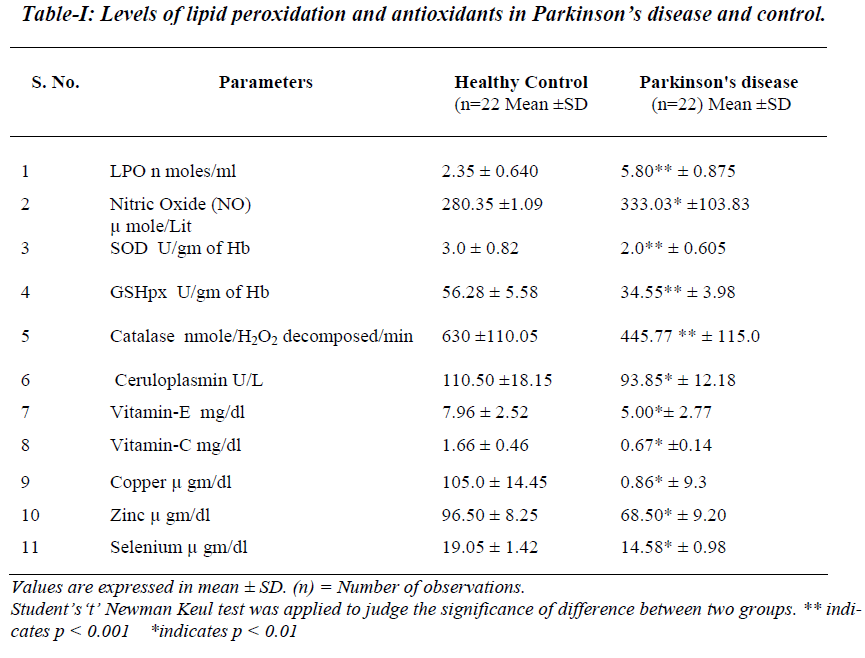 Table 1: Levels of lipid peroxidation and antioxidants in Parkinson’s disease and control.

Activity of nitric oxide synthase (NOS) is enhanced by N- methyl – D – aspartate, which in turn leads to enhanced generation of nitric oxide. It combines with superoxide radical to form peroxynitrate [22,23]. This peroxynitrate increases oxidative stress, which might be causing loss of dopaminergic neurons.

GSHpx contains selenium in the form of single selenocys-teine residue [24]. Thus decreased selenium concentration may decrease the activity of GSHpx. The increased oxida-tive stress may oxidize hemoprotein subunit of catalase. Due to oxidation, there may be dissociation of tetrameric hemoprotein molecule and results in loss of catalase ac-tivity. Thus elevated oxidative stress may decrease the activity of catalase. Oxidative stress may inhibit synthesis of ceruloplasmin, which might be responsible for reduced levels of Ceruloplasmin in PD.

Due to increased oxidative stress in PD there may be in-creased consumption of vitamin E and C. Vitamin E traps free radicals and interrupts the chain reaction that damage the cells [25]. Decreased vitamin E and C might be caus-ing oxiradical mediated injury and thus may contribute to nigral neurodegeneration.

This study indicates that, oxidative stress and antioxidants may play an important role in PD. Elevated free radicals may cause neuronal loss and play a role in pathogenesis of Parkinson's disease. The decreased activity of these antioxidant may be indirectly responsible for neuronal loss and probably plays a role in pathogenesis of Parkin-son's disease.