Residues of some heavy metals (HM) were monitored in vegetable, fruit and fish samples collected from local markets of Tanta and Ismailia cities, Egypt. The acidic digested samples were measured on Inductive Coupled Plasma-Optical Emission Spectroscopy (ICP-OES). Samples of vegetables and fruits collected from the vicinity of main roads had some higher levels than other samples. In case of catfish, HMs were monitored only in Tanta region since this fish species is not consumed much in Ismailia city. The mean values detected were 5.38, 0.62, 85.96, 6.41 and 55.05 mg/kg for Cu, Pb, Zn, Cd and Mn, respectively. Target hazard quotient (THQ) values were higher than unity for all metals at 50th and 90th percentile of ingestion. Meanwhile, hazard Index (HI) showed the following order: Cd?Mn?Cu?Zn?Pb. The present study indicated that the repetitive consumption of particular type fish might pose some undesirable health effects. The study also emphasized the need for regular monitoring program beside the need for awareness raising about the food contamination with heavy metals.

In Egypt several efforts were taken by regulatory bodies to monitor residues of heavy metals and persistent organic pollutants in various environmental matrices [1]. Organic pollutants in of food increasing health risks is that worldwide nations including Egypt didn't provide safety hazardous chemical standard values in foods [2]. Contamination of heavy metals and persistent organic pollutants in food commodities are a key issue, with serious repercussion on public health [3]. Residues of these contaminants have been linked to developmental neurobehavioral problems, altered function of immune cells and possible childhood leukemia [4]. The Total Diet Study or Market Basket Survey Program initiated by Food Drug Administration (FDA) in the early 1960s and modified in 1980s in which dietary intake of selected pesticides, industrial chemicals, toxic elements and radionuclides monitored has been one of the major steps to draw attention to the health impacts of these contaminants [5-7].

Most of HMs are not biodegradable, have long biological halflives and have the potential for accumulation in the different body organs leading to undesirable side effects [8,9]. Studies have also shown that, the intake of HMs can lead to altering of `humans and animals healthiness state. In this respect there is some strong indications that relate the presence of some heavy metals residues in food and the incidence of gastrointestinal cancer [10,11] and cancer of pancreas, urinary bladder or prostate [12].

Food safety is a major public concern worldwide and food consumption has been identified as the major pathway for human exposure to contaminants. During the last decades, the increasing demand of food safety has stimulated research regarding the risk of POPs and HMs associated with food consumption [13,14]. Risks of HMs associated with vegetables, fruits and fish consumption were established in many studies. Vegetables, fruits and fish are able to accumulate higher amounts of contaminants in their tissues. Fish are also considered a good indicator for ecosystem pollution [15-17]. This is an original research paper. So kindly discuss the novelty of this. No current studies have focused on the foods HMs monitoring in Egypt. The present study aims to assess the risk of HMs associated with some vegetables, fruits and fish consumption in two main cities in Egypt, Ismailia located in the East of Egypt and Tanta located in the Centre of Nile Delta.

Eighty different samples were collected randomly from markets of each of the two cities. Fish samples were Nile tilapia and catfish, while vegetable samples were tomatoes, cucumber, carrots, potatoes and squash, and fruit samples were peach, orange and pineapple. These kinds of foods are the mostly consumed in these regions. The samples were placed in paper bags, labeled and transferred in ice box to laboratory, labelled and stored at -20°C until used.

The collected samples were washed with distilled water to remove the dust particles. Then, they were cut to small pieces using clean knife. Different parts (roots, stems and leaves) of vegetables were dried at 100°C. After drying, the samples were grinded into a fine powder using a commercial blender and stored in dissector until used for acid digestion.

The dried samples were digested with concentrated nitric acid. Ten ml of ultrapure concentrated HNO3 (Merck) were added, and heated on a hot plate for clear solution. After cooling, 10 ml of conc. HCl were added and heated until constant volume. The solution was transferred, diluted and filtered through 0.45 μm nitrocellulose membrane filter [18].

500 mg of dried sample was put in crucible and digested with perchloric: nitric acid (1:4 v/v) to constant volume. After cooling, the digested samples were filtered and made up to the final volume 30 ml using deionized water [19]. All reagents were of analytical reagent grade. Deionized water was used throughout the study. All the plastics and glass wares were washed in nitric acid for 15 min and rinsed with deionized water before use. Instrumental calibrations with standard solutions were done for optimum conditions.

The limits of detection (LODs) of measured metals were calculated as double of the standard deviation of a series of measurements of a solution against the blank absorbance [20]. Working standards were used to ensure reliability of the results. A recovery experiment was carried out by spiked the blank with 50 and 100 ppm of multi-standards of desired metals and the procedures were done as described above.

Strict quality assurance of the analytical process was routinely observed for the instrumentation processes. All the glass and plastic wares were washed with nitric acid, afterward rinsed with deionized water. All reagents were of analytical grade and deionized water was used throughout the study. Five ranges of external standard solutions were prepared for calibration curve with good linearity (R2>0.99).

The risk of contaminated fish, vegetables and fruits consumption was estimated based on guidelines of EPA [21-23], concentrations of HMs, data of surveyed questionnaire conducted on inhabitants of Ismailia and Tanta and some data of Integrated Risk Information System [24].

Where C is the concentration of metal expressed as mg/kg. IR is the ingestion rate (estimated under community survey). ED is the average period (estimated). EF is the exposure frequency (meal/year). BW is the body weight (estimated). AT is the averaging time (365 day/year) [25].

Estimation of cancer risk through ingestion route depend on the availability of cancer slope factors which are provided on USEPA web site [23,24]. In brief, cancer risk was estimated as follows:

On the other hand, non-carcinogenic risk was evaluated based on the reference doses (RfDs). Target hazard Quotient (THQ) of chemicals via ingestion route was calculated as follows:

Where, RFD is the reference dose of specified substances [23,24]. Total THQ or hazard index (HI) is the sum of more than one hazard quotient for all metals.

Table 1: Operational conditions of ICP-OES for determination of HMs in different matrixes. 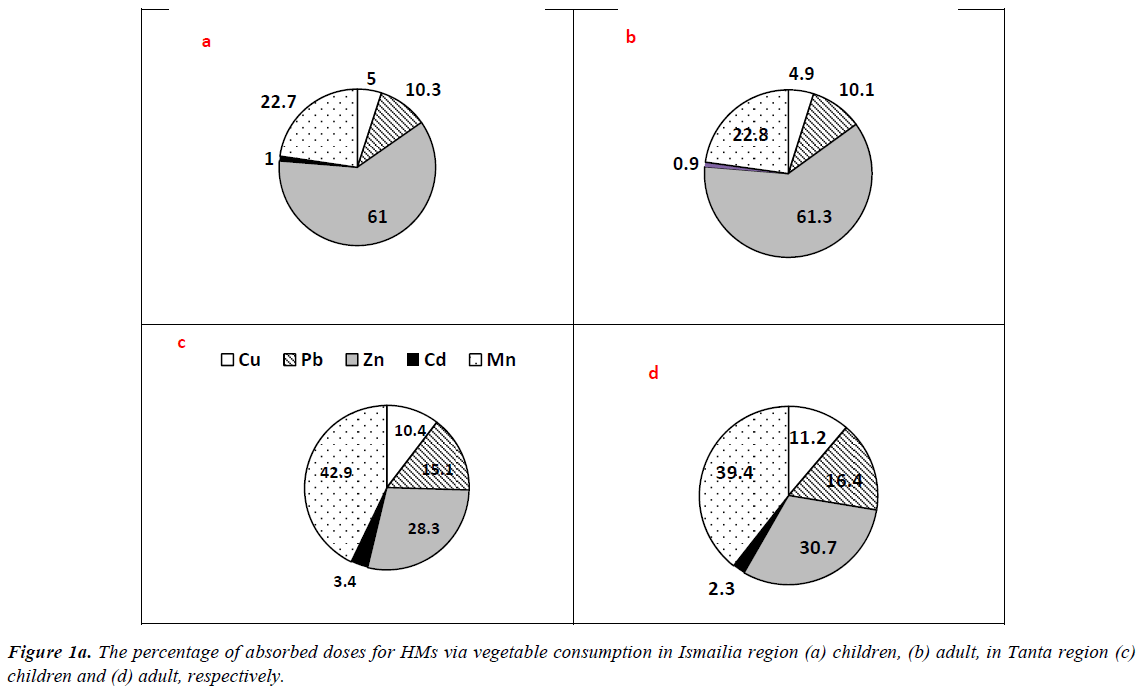 Figure 1a: The percentage of absorbed doses for HMs via vegetable consumption in Ismailia region (a) children, (b) adult, in Tanta region (c) children and (d) adult, respectively. 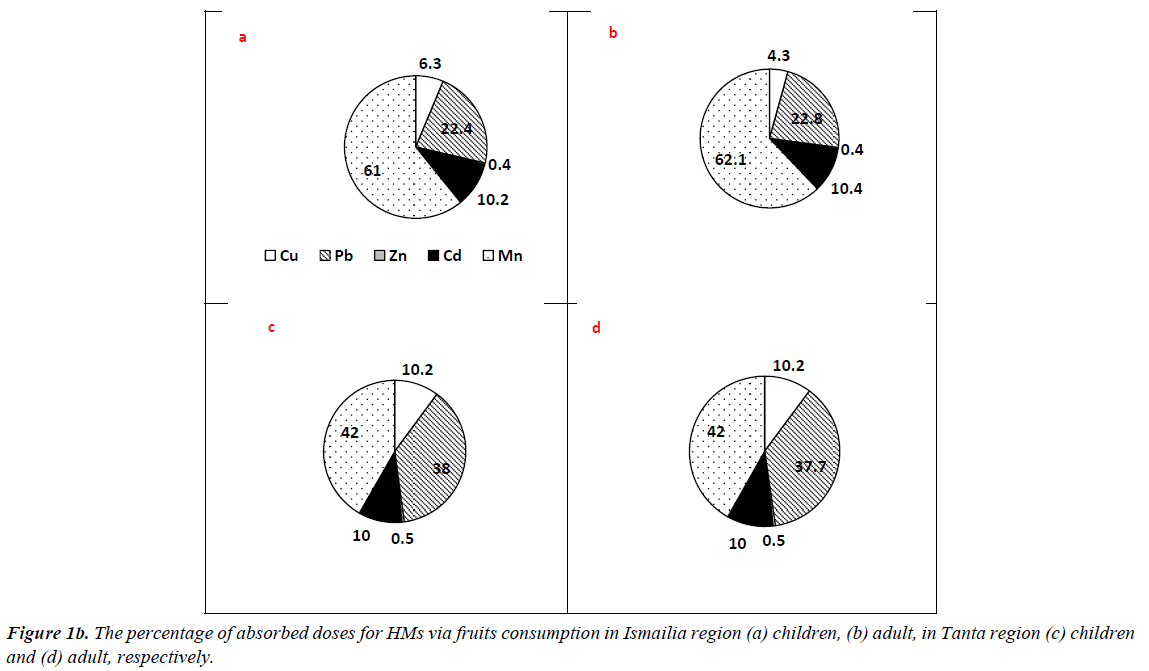 Figure 1b: The percentage of absorbed doses for HMs via fruits consumption in Ismailia region (a) children, (b) adult, in Tanta region (c) children and (d) adult, respectively. 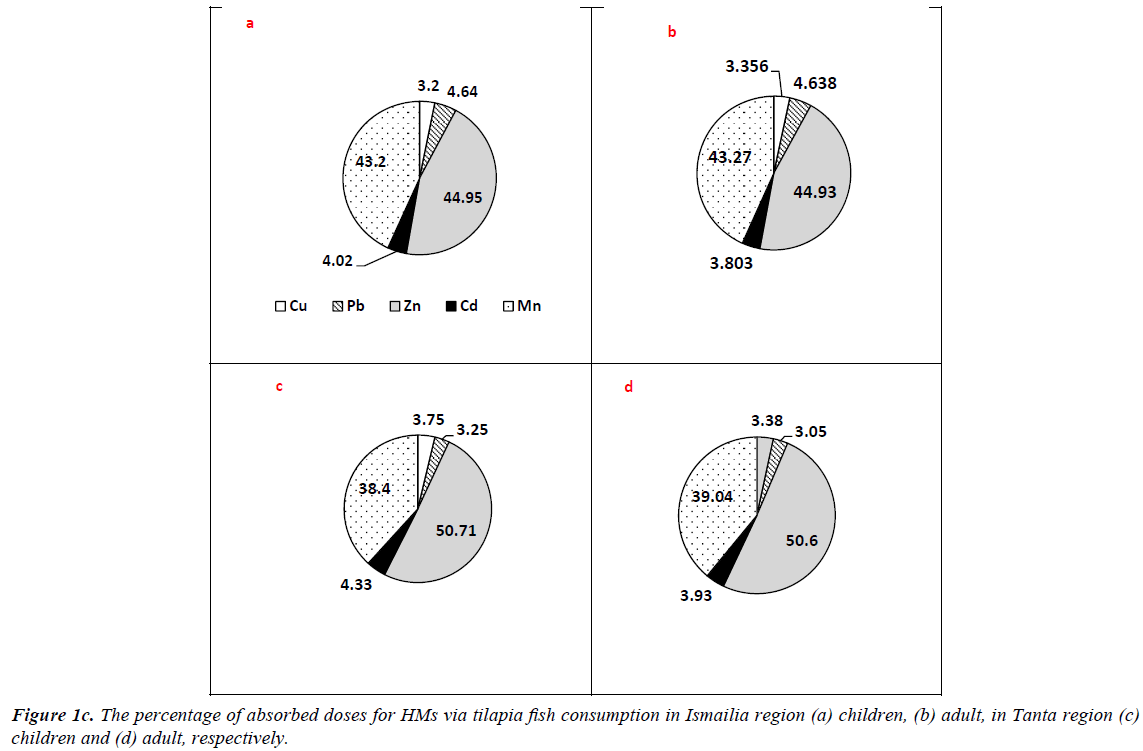 Figure 1c: The percentage of absorbed doses for HMs via tilapia fish consumption in Ismailia region (a) children, (b) adult, in Tanta region (c) children and (d) adult, respectively.

Figure 1d: The percentage of absorbed doses for HMs via catfish fish consumption in Tanta region (a) children and (b) adult, respectively. 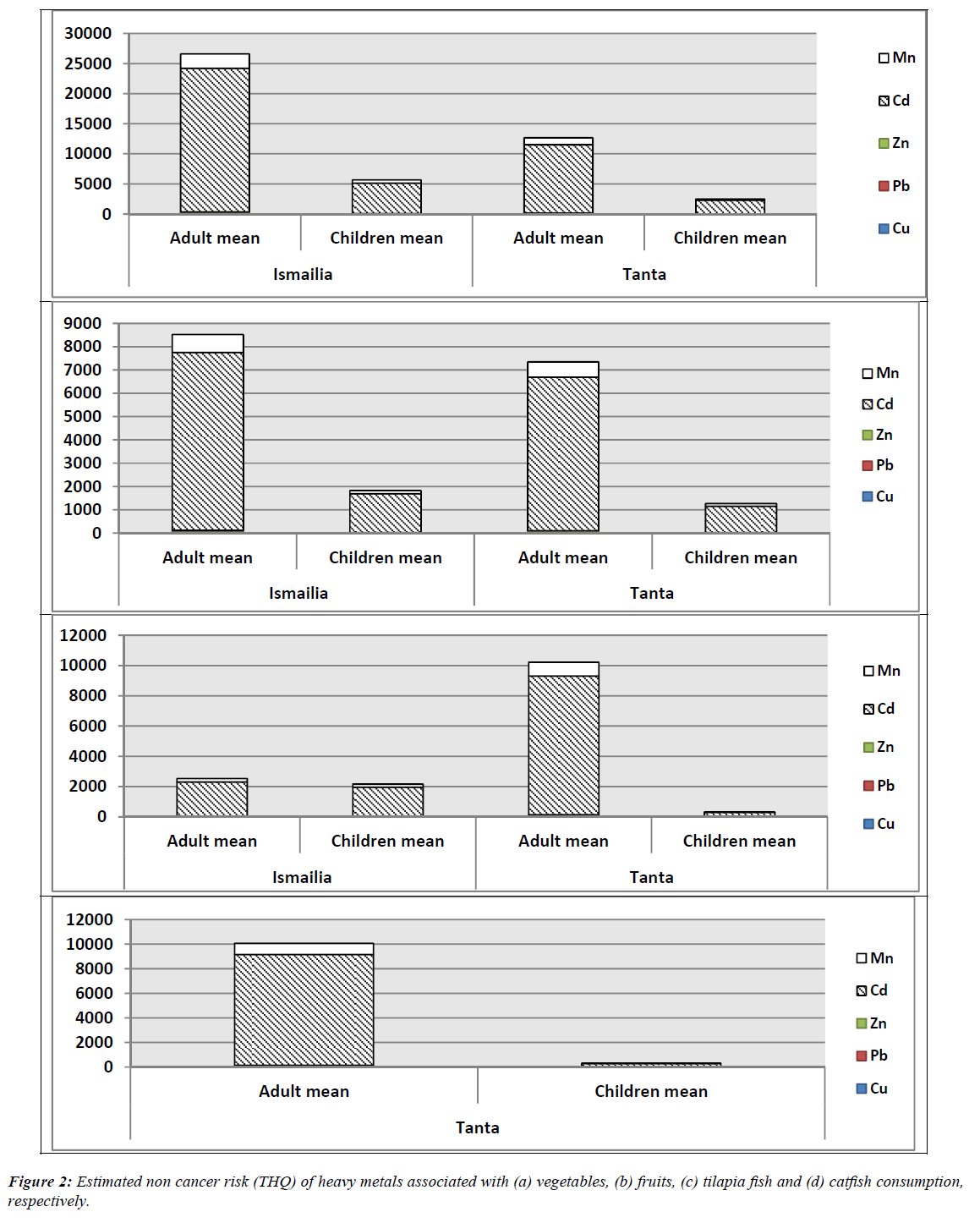 Metals are considered the most common environmental pollutants. Their accumulation and distribution in soil and water increase to an alarming rate, causing deposition and sedimentation in water reservoirs and affecting aquatic organisms [27,28]. Rapid, unorganized urban and industrial developments have contributed to the elevated levels of HMs in the urban environment of developing countries such as Egypt [29], Iran [30], China [31] and India [32-35].On the other hand, plants contain the amount of Cu, which is inadequate for normal growth of plants. However, application of micronutrient fertilizers and copper-based fungicides may sometimes increase it to the alarming levels [29].

Hassan et al. [40] determined some trace metals in commercial fruit juices in Egypt. They reported moderate Cu values. However, Zn concentrations in all samples were lower than MPL, besides Cd and Pb were below MPL. Comparing with our findings, Zn and Cu also were lower than MPL. Abou-Arab et al. [41] reported that the highest levels of Pb were detected in the samples collected from industrial and areas of heavy traffic. While the least Pb value was recorded in the rural areas. Consequently, we can explain, why there are high levels of Pb in some fruit and vegetable samples in the present study. From this point, the levels of Pb in the atmosphere of Egyptian industrial and urban areas were higher than the levels in in rural areas and in some other countries [42,43].

Although, vegetable and fruit samples of Tanta region have slightly lower Mn contents than Ismailia region, levels of Mn in both regions exceeded MPLs. The reasonable explanation is mainly attributed to the heavy traffic in both Tanta and Ismailia, in addition to the presence of some industrial facilities in the country side of close proximity to areas grown with vegetables and fruits.

The selection of fish species is a critical issue in bio-monitoring studies. Nile Tilapia avoid long-term exposure to metal pollution at a particular site by activity swimming, while African catfish have a more stationary behavior and thus may be exposed to metal pollution for a long time [44]. However, the difference in sensitivity of Nile Tilapia and African catfish to metal bioaccumulation might be attributed to their feeding peculiarities' [45]. Mohamed et al. [46] reported the concentrations of Pb, Cd and Cu in the edible parts of fish samples in the following order Pb> Cd> Cu respectively. This finding is exactly in agreement with the current study regard fish samples from Ismailia region. Monitoring of HMs by Ibrahim et al. [47] showed that Zn and Cu concentrations were the highest in muscles of African catfish in the same minor for Zn levels. This is in agreement with the findings of Shakweer et al. [48], who concluded that the concentration of trace metals in various organs of fish reflects the degree of water pollution in the aquatic environments.

In the present study, HI values resulting from vegetables, fruits and fish ingestion exceeded the threshold value (HI=1) indicating signs of possible toxicity for both age categories. Abdel-Halim et al. and Omer et al. [49-51] showed that HI values of HMs resulting from fish ingestion were greater than unity suggesting some undesirable health effects associated with high fish consumption. Abdel-Khalek et al. [52] showed that the calculated HI indicated that each metal had low HI, but the cumulative impacts of all metals represented possible threat for consumers of higher consumption rate of fish.

The toxicity of non-essential metals occur through the displacement of essential metals from their native binding sites, or through ligand interactions in the conformational structure of nucleic acid and proteins or the interference with oxidative phosphorylation and osmotic balance [53]. Higher levels of both essential and non-essential metals can damage cell membranes, alter enzyme specificity, disrupt cellular functions, bind with greater affinity to thiol-containing groups and oxygen sites than the essential metals do, and damage the structure of DNA [54]. Previous studies have shown that certain metals can cause either increasing or decreasing levels of serum protein, glucose and cholesterol, as well as changes in serum enzymes activities [55]. In toxicological studies acute exposure changes in activities of some enzymes may reflect cell damage in specific organs [56]. HMs are among the major contaminants of food supply and may considered the most important problem to environment [57]. The problem is specially developing countries because of lack of awareness [58-61].