The diagnosis of DBS is established with the characteristic clinical features, distinctive pattern of low-molecular-weight proteinuria and biallelic pathogenic variants in LRP2 identified by molecular genetic testing [4].

Our patient is a ten year old boy offspring of completely healthy parents. He was delivered at full term gestational period and was appropriate for the gestational age. On neonatal examination he was found to have dysmorphic facial features as shown in Figure 1. 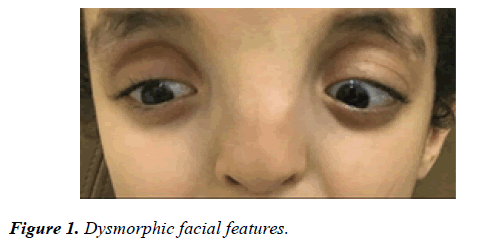 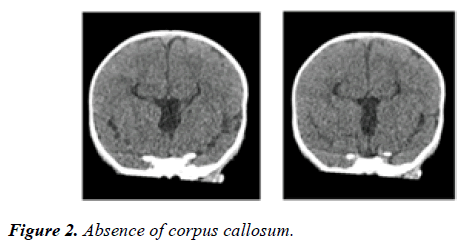 Chest x-ray fluoroscopy showed no evidence of paradoxical or limitation of both hemi diaphragm. CT angiography of chest showed normal anatomy of chest vasculature. The surgical repair of diaphragmatic hernia was not done because of stable clinical course. He has moderate intellectual disability and developmental delay.

At the age of seven years he presented to ophthalmology services with right esotropia. On examination under general anesthesia he was found to have right chronic inoperable retinal detachment. The examination of left eye showed high myopia with normal myopic fundus. The objective refraction was -11.00 D. He was advised to have regular ophthalmology surveillance. He developed retinal detachment in left at the age of nine years and presented to emergency department with loss of vision in left eye. The examination showed hand motion vision (HM) in the left, normal anterior segment and rhegmatogenous retinal detachment. He underwent left pars plan vitrectomy, 360 degree endolaser and silicone oil temponade under general anesthesia. Although he was found to have total retinal detachment, as of this writing retina is flat.

Even Though prevalence of DBS is unknown, it seems to be a rare entity. A few cases of DBS have been reported worldwide.

LRP2 gene mutations cause DBS. The LRP2 gene supports commands for producing a Megalin which is a receptor protein [6], this protein comes up with spots into which specific new proteins, called ligands, suited. Collectively, ligands and their receptors generate signals that disturb cell growth and performance. Megalin is implanted in the membrane of cells that line up the shells and fissures of the body. Megalin proteins and many ligands are participated in several body developments, including the absorption of vitamins A and D, immune system response stress control, the transportation of fats in the blood circulation, the growth of several body organs such as brain, spinal cord, eyes, ears, lungs, intestine, reproductive system, and renal tubules [7]. The characteristics of DBS are most likely triggered by the failure of Megalin proteins to improve absorb ligands, disturbance of biochemical signaling paths [4].

DBS is inherited in an AR form, which requires both copies of the gene in each cell have mutations. In nearly all briefcases, the parents of an individual with an AR disorder are healthy, and they are asymptomatic [8].

One case was discovered to have DBS as a consequence of uniparental disomy from his father uniparental disomy arises when diagnosis is suggested by a combination of clinical and neuroimaging features along with a typical pattern of lowmolecular- weight proteinuria, increased urinary levels of retinol-binding protein (RBP) and RBP/creatinine ratio. The diagnosis is confirmed by molecular genetic testing [4,8].

Detection of hypertelorism, agenesis of the corpus callosum, and either Congenital diaphragmatic hernia or omphalocele by prenatal imaging should raise suspicion of DBS. Prenatal diagnosis for at-risk pregnancies is possible and requires earlier recognition of the disease-triggering mutation in the family [9].

DBS is AR syndrome. Genetic counseling should be provided to parents of affected children and to their relatives. Parents of an involved newborn are required to be carriers for the diseaseproducing allele [9].

DBS has a feature group of clinical characteristics restricting differential diagnoses. Nevertheless, some corresponding signs are observed in, Chudley-McCullough, tetrasomy 12p, Fryns, Acrocallosal, and Craniofrontonasal syndromes. The renal phenotype comparatively is similar to Lowe syndrome and Dent disease. The eye phenotype could be like Stickler syndrome [10].

Routine examination of the eye to check visual acuity and fundus exam is crucial, in addition to hearing testing and kidney function. Eye spectacles, prophylactic retinal laser treatment for retinal breaks or retinal surgery for retinal detachment may be required. Adapted education for sight, hearing and intellectual incapacities has to be offered as is required for concerned kids.

Affected individuals can achieve useful vision and hearing with correction. Overall health status in patients is generally good in childhood and adolescence. End-stage kidney failure is a rare and life-threatening complication. Pre- or peri-natal presentation with diaphragmatic and abdominal wall defects requires surgical intervention and is associated with elevated morbidity and mortality.

Our patient was managed. The retinal detachment required pars plans vitrectomy and silicone oil temponade to save the remaining eye. Our massage is to keep a routine retinal exam for those patients to avoid the occurrence of major complications and keep a regular eye glasses correction, in addition to pediatric and ear consultations. 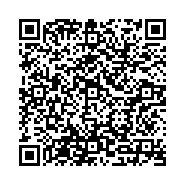