Polyunsaturated Fatty Acids (PUFAs) are essential fatty acids that could not be synthesized by the human body [1,2]. PUFAs in foods mainly include n-6 series of arachidonic acids and n-3 series of Docosahexaenoic Acids (DHAs). n-3 Fatty Acid desaturase (FAT-1) can convert n-6 fatty acids in human bodies into n-3 fatty acids, thus enabling the regulation of fatty acid level in human bodies. Many n-3 PUFAs, such as eicosapentaenoic acid and DHA, can enhance body immunity, inhibit tumor cell proliferation and transfer, induce tumor cell apoptosis, and strengthen the therapeutic effect of medicines for tumors. Based on the latest studies, n-3 PUFAs and FAT-1 can significantly suppress many tumors, such as rectal, gastric, prostate, and breast cancers [3-5], among others.

To construct a cell line with stable FAT-1 expression, pLVXinternal ribosome entry site (IRES)-Green Fluorescent Protein (GFP) (vector), pLVX-IRES-GFP-FAT-1 with complete coding DNA sequence of FAT-1 (FAT-1), and packaging plasmids (pSPAX2 and PMD2G) were transfected into 293T cells through the X-tremeGENE™ 9 transfection method on a 4:3:1 proportion. Virus supernatants at 48 and 72 h were collected and mixed with a complete medium on a 1:1 proportion. Next, 3 ml mixture was added into the six-hole plate coated with Ishikawa and cultured for 24 h. The second transfection was conducted in the same way. Infected cells were cultured in an incubator with 5% CO2 and 95% air at 37˚C for another 2 days. Green fluorescence expression was observed under fluorescence microscope.

GFP-positive cells in vector and FAT-1 were selected via fluorescence-activated cell sorting. The GFP-positive rate of these selected cells was further analysed using fluorescenceactivated cell sorting. Subsequently, sorted GFP-positive cells were centrifuged and collected. RIPA lysate was added. After 30 min splitting on ice, equal volume of 2X loading buffer was added. Following pyrolysis thermal deformation, 10% sodium dodecyl sulphate-polyacrylamide gel electrophoresis and 100 min transverse flow transmembrane at a rate of 200 mA were conducted. The solution was closed in 5% skim milk at room temperature for 1 h. FAT-1 and β-catenin primary antibody diluent was added for overnight incubation at 4˚C and then washed with Tris-Buffered Saline (TBS) for three times at 5 min each. The corresponding second antibody was incubated at room temperature for 1 h and then washed with TBS for three times at 5 min each. HRP color reagent was utilized for scanning development.

Vector and FAT-1 cells were cultured in a six-hole plate. Each hole had a cell number of 1 × 106. In addition, each group has three accessory holes. Cells were collected, and their number was recorded every day. The cell proliferation curve was also drawn.

Vector and FAT-1 cells were incubated on a 96 hole plate. A total of 2,000 cells were incubated on each hole. Moreover, each group of cells had 10 accessory holes, which were cultured under 37˚C for 48 h. Five accessory holes of each group were added with 10 μL CCK-8 solution. After 2 h incubation, absorbance at 450 nm was tested using a microplate reader. The relative value between FAT-1 and vector groups was calculated by subtracting the test values of CCK-8 groups from those of non-CCK-8 groups.

To disclose the effect of FAT-1 on Ishikawa, Ishikawa with stable FAT-1 expression was constructed through the lentivirus infection method. The lentivirus of vector and FAT-1 were prepared using the lentivirus package technique. Virus preparation effects were observed under an immunofluorescent microscope. The 293T cells with virus package were examined under a microscope. Most cells have GFP expressions, indicating a good virus preparation effect (Figure 1). 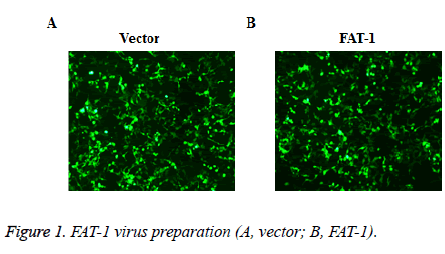 Prepared vector and FAT-1 viruses were collected and infected with Ishikawa, and then infected vector cells and FAT-1 cells were obtained. GFP-positive cells were screened using fluorescence-activated cell sorting and amplified. Next, amplified vector and FAT-1 cells were collected for further WB analysis of FAT-1 expression. Based on the WB results, FAT-1 expression in cells infected with FAT-1 lentivirus is significantly higher than that in vector (Figure 2), which suggests that FAT-1 has sustainable stable expression in Ishikawa. 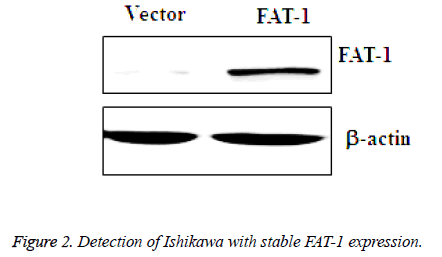 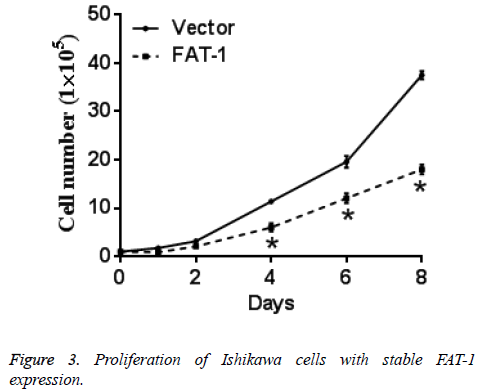 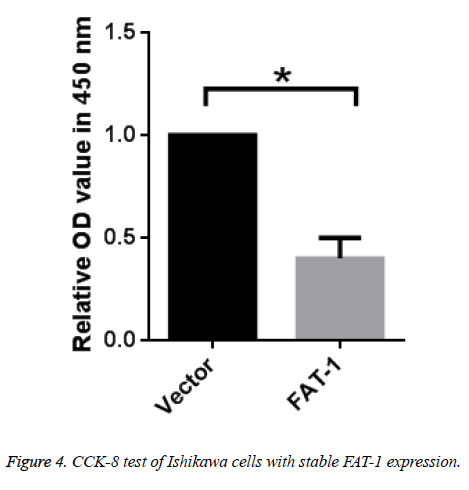 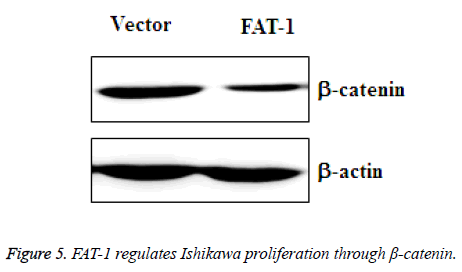 As a multiple malignant tumor in women, endometrial cancer has high morbidity and low survival rate characteristics and is a serious threat to women’s health [6]. At present, treatment to endometrial cancer mainly relies on surgical operation and medical chemotherapy. However, traditional surgical operation and medical chemotherapy could not significantly prolong survival period of patients. Therefore, the positive exploration of new treatment is still an important topic in the study of endometrial cancer. Gene therapy as tumor treatment has attracted considerable research attention. This treatment involves artificially inputting exogenous target genes at the DNA or RNA level of target cells, which could be expressed and have unique biological effect, thus realizing the goal of tumor treatment. At present, scientists are exploring gene therapy for endometrial cancer [7]. n-3 PUFAs has been reported to inhibit the development of many tumors [8]. Studies have discovered that FAT-1 can only be detected in most plants and few lower animals [9]. Heterogeneous FAT-1 expression can effectively inhibit the proliferation of a variety of tumor cells [10]. Therefore, n-3 PUFAs and FAT-1 gained the attention of scientists. In terms of the inhibitory effect of FAT-1 on Ishikawa proliferation, the WB results showed FAT-1 has successful exogenous overexpression in Ishikawa cells, indicating that FAT-1 can be transferred into endometrial cancer cells and achieve overexpression. This finding suggests that FAT-1 can have overexpression in human cells and further play its functions. The constructed cell line with stable FAT-1 expression is a beneficial tool for conducting follow-up research on endometrial cancer cell proliferation. Cell counts and CCK-8 test proved that FAT-1 can inhibit proliferation of endometrial cancer cells through β-catenin. The further mechanism of actions of FAT-1 requires deep discussions.

The following previous authors (Sheng Liang, Xiaoyuan Lu) state that we hold no conflict of interest at present or at future regarding any aspects (technical/academic) of this research.”