Postoperatively, the mean photopic and scotopic contrast sensitivity did not differ between the groups (p=0.57).

Conclusion: Postoperative refractive outcomes and visual acuity following the implantation of these aspheric IOLs were similar. The different asphericity and yellow tinting of the SZ-1 IOL did not affect postoperative visual performance.

Advances in biomaterials and optical engineering have led to the introduction of foldable, aspheric Intraocular Lenses (IOLs) [1]. These IOLs have resulted in improved visual quality compared with older generation spherical IOLs [2]. The optical designs of monofocal aspheric IOLs are continually being refined to improve functional vision postoperatively. In general, a higher spherical aberration decreases the Strehl ratio resulting in lower optical quality [3]. Additionally, IOLs produced by different manufacturers are composed of varying materials that affect light transmittance and, potentially, visual function. In general, different aspheric IOLs are used when post refractive visual performance is unaffected because aspheric IOL designs are based on homogreneous refractive materials [4].

The availability of numerous IOLs means that many do not undergo extensive clinical investigation after marketing approval, with peer-reviewed publications being limited to the most commonly used IOLs. Hence, there are limited data available to surgeons for the selection of the most appropriate IOLs. In the current study, we compared the refractive and functional visual outcomes of two different aspheric monofocal acrylic IOLs with differing tinting and spherical aberration values.

This retrospective comparative study evaluated consecutive patients with senile cataract who underwent bilateral implantation of the SZ-1 (NIDEK Co. Ltd., Gamagori, Japan) or ZCB00 (Johnson and Johnson Inc. New Brunswick, NJ, USA) IOL. Patients with anterior segment disease, high or special ametropia, corneal irregular astigmatism, and pterygium were excluded from this study. As all examination devices were based on eye gaze, we further excluded individuals with severe refractive medium opacity, macular degeneration, retinal diseases, nystagmus, and poor cooperation, which can affect measurement accuracy. Data sets were excluded if data for any of the parameters were not available. The right eye of each patient was selected for inclusion in the study. All the patients had undergone surgery from January 2017 to October 2017, and brand of IOLs select at random from a list of all who had surgery. The institutional review board of Antai Tian-Sheng Memorial Hospital, Taiwan, Republic of China approved the present study (18-085-B), and the informed consent was obtained from all participants.

Table 1 presents the characteristics of both IOLs. Sixty-two eyes of 62 patients underwent IOL implantation. Thirty-three eyes of 33 patients received the SZ-1 IOL (SZ-1 group), while 29 eyes of 29 patients received the ZCB00 IOL (ZCB00 group). All the patients included in the study had senile cataract, with spherical manifest refractive error ranging from +4.25 to −17.50 D and astigmatism up to −2.25 D. Patients were excluded if they had undergone previous ocular surgery, had a history of trauma, ocular disease other than cataract, zonular weakness or were receiving medications that may affect vision.

Refractive outcomes, changes in visual acuity, changes in ocular spherical aberration, and changes in photopic and mesopic contrast sensitivity were analyzed. The Student’s t test was used to compare mean values and the Wilcoxon rank-sum test was used to compare medians. The 95% Confidence Intervals (CI) is presented as appropriate. A p<0.05 denoted statistical significance. Data for 1 day, 1 month, and 3 months after IOL implantation for the treatment of cataract are presented. 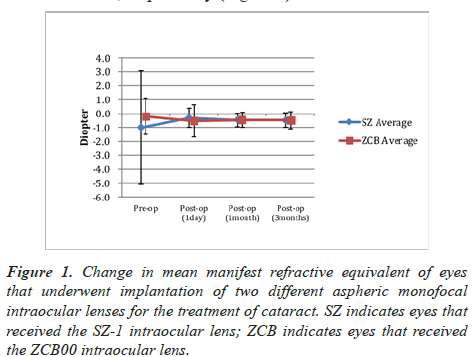 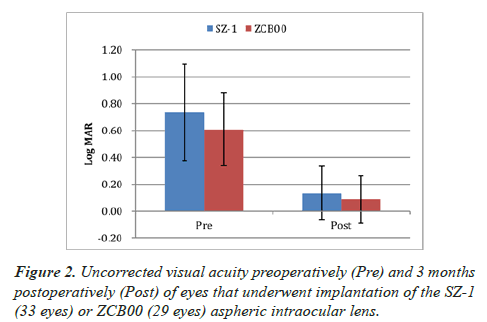 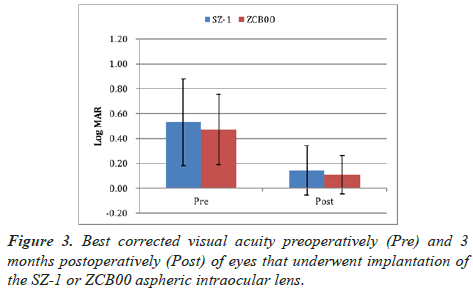 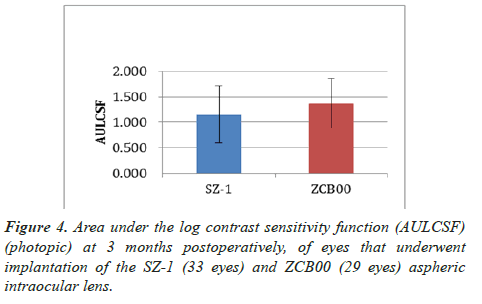 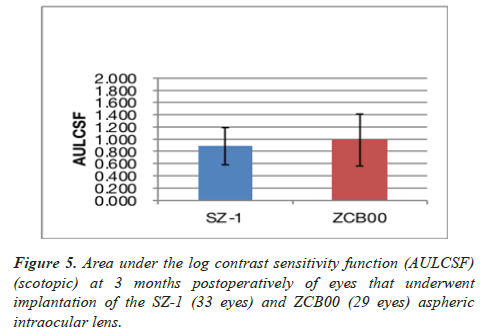 The results of the present study showed that the refractive and visual outcomes were similar among patients who received the SZ-1 or ZCB00 IOL. For example, the mean MRSE at 3 months did not differ clinically (or statistically) between the groups. Additionally, at 3 months postoperatively, 57% and 58% of eyes in the SZ-1 and ZCB00 group had a UCVA of 20/20. Moreover, the mean postoperative BCVA did not differ clinically (or statistically) between the groups. Of note, at 1 month and 3 months, the mean postoperative MRSE in the SZ-1 group was −0.88 ± 1.01 D and −0.87 ± 1.08 D, respectively. In the ZCB00 group, these values were −0.54 ± 0.67 D and -0.65 ± 0.76 D, respectively (Figure 1). However, these differences were not statistically significant. Notably, the SZ-1 group indicated more consistent MRSE at all the examined postoperative time points.

A limitation of the present study is only total aberrations of the study eyes were calculated. Furthermore, detailed knowledge regarding internal aberrations is essential to obtain precise wavefront measurements. This will be the subject of future investigations.

In summary, the results of this study confirm that the outcomes of SZ-1 and ZCB00 IOL implantation for the treatment of senile cataract are similar. For example, the UCVA and BCVA were not statistically different between the groups. Moreover, the differing asphericity and yellow tinting of the SZ-1 did not affect postoperative visual performance. The differing spherical aberration values observed between these IOLs can be used to address the varying visual demands of patients.

Institutional approval from the Institutional Review Board of Antai Tian-Sheng Memorial Hospital was obtained (18-085-B).