This review summarizes our work on the process development for synthesis of amontidineremantadine. The presented publications have been sorted according to five basic criteria. Influenza is a serious infectious disease, which is life-threatening especially in children, seniors and immunocompromised patients. In addition to vaccination, the development of new anti-influenza agents represents a crucial defense strategy to combat seasonal and pandemic influenza strains. At present most attention is paid to the development of inhibitors of influenza neuraminidase, which has been established as a key drug target for the prophylaxis and treatment of influenza infections. However, the emergence of drug-resistant influenza variants highlights the need of continuously innovative strategies for the development of new drugs with improved antiviral effects, higher safety and increased tolerability. The M2 proton channel of the Influenza A virus is the target of the anti-influenza drugs amantadine and rimantadine. The effectiveness of these drugs has been dramatically limited by the rapid spread of drug resistant mutations, mainly at sites S31N, V27A and L26F in the pore of the channel. Despite progress in designing inhibitors of V27A and L26F M2, there are currently no drugs targeting these mutated channels in clinical trials. The article traces the evolution of various synthesis approaches and provides a comparison for overall yield efficiency. Amantadine hydrochloride is an antiviral drug used in prevention and treatment of influenza A infections. It has also been used for alleviating early symptoms of Parkinson’s disease. Several methods for the preparation of Amantadine hydrochloride have been reported overall yields ranging from 50% to 52%. In this article, we describe procedure for the synthesis of Amantadine hydrochloride from N-(1-adamantyl)acetamide with an improved yield of 60%. The procedure was also optimized to reduce the use of toxic solvents and reagents, rendering it more environmentfriendly. The procedure can be considered as suitable for large-scale production of amantadine hydrochloride.

It is estimated that over 40 million people perished during the 1918 Spanish influenza pandemic, and nearly 35% of the global population was infected with the disease [1]. From Europe to America and even reaching as far as the wilderness of Alaska and remote Pacific islands, this virus was exceptionally widespread during a time when global travel was not very prominent. This pandemic has been regarded as one of the single most devastating infectious disease events in recorded history [1]. It is currently believed that the influenza strain responsible for the 1918 Spanish flu is genetically linked to the H1N1 influenza that emerged in 2009 and threatened another pandemic [1,2]. With the advent of modern vaccinations, the death toll from the flu virus has been substantially lowered, but there still remains the possibility for a recurrent epidemic. Should the virus mutate in such a way that a new variant circulates, there would be little defense against the spread of the disease and a global outbreak would be almost inevitable.

Since its identification in the 1930’s, the influenza virus has been extensively studied and characterized, yet many aspects of its mechanism of infection still remain unclear. To date, only four antiviral drugs have been approved by the Food and Drug Administration (FDA) to treat influenza illness (Figure 1). Of those four drugs, two have developed resistance among the most common influenza A strains in circulation and are rarely used today. Although every year new developments in prophylactic vaccinations are made, few options for post-infection treatment are available. For this reason, there is a vast opportunity in this area for continued drug development.

Figure 1: FDA-approved drugs for the treatment of the influenza A virus.

The development of new antiviral drugs is hindered because of the relatively simple structure of the influenza virus (Figure 2) and the fact that few known areas in the viral life cycle can be targeted for inhibition. The two current drug inhibition targets in the influenza virus are the M2 proton channel, which aids in releasing virus particles from an infected host cell, and the neuraminidase (NA) enzyme, which is required for viral recognition and entry into a host cell (Figure 2). 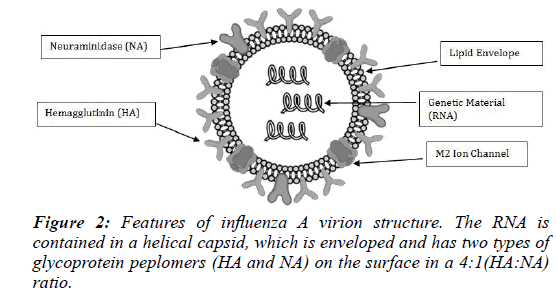 Figure 2: Features of influenza A virion structure. The RNA is contained in a helical capsid, which is enveloped and has two types of glycoprotein peplomers (HA and NA) on the surface in a 4:1(HA:NA) ratio.

The neuraminidase inhibitors (Figure 1) are currently the only useful FDA-approved treatments for the influenza virus, in that they have not yet acquired resistance within the virus. These drugs, Oseltamivir (1, Tamiflu®, Genentech) and Zanamivir (2, Relenza®, GalaxoSmithKline) (Figure 1) function by inhibiting the neuraminidase (NA) protein of the virus. The neuraminidase enzyme is responsible for cleaving host cell sialic acid residues from viral hemagglutinin, thus releasing the new viruses to carry on and infect other healthy cells. The viral NA catalytic site is highly conserved among all influenza A and B viruses. Both Oseltamivir and Zanamivir function by acting as stable transition state analogs of the sialosyl cation, which is a highly unstable transition state complex in the enzymatic mechanism of viral sialidase (Figure 3) [3-5]. The NA inhibitor drugs 1 and 2 are similar enough in structure to the sialosyl cation transition state complex, allowing them the ability to bind tightly to the sialic acid active site and prevent viral budding. 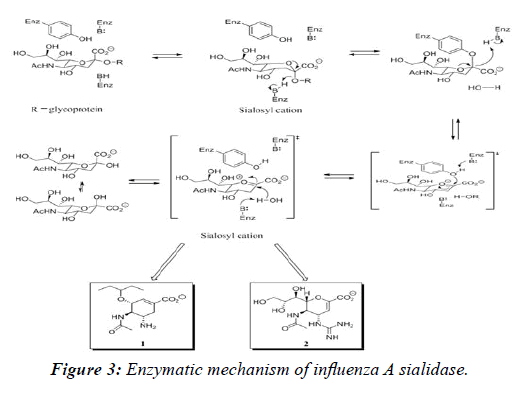 Particular interest to this work is the structure and function of the M2 ion channel. This channel is the target for the adamantane family of antiviral drugs and has recently become a popular topic for research in this area [6-8]. The two current FDA-approved M2 ion channel blocker drugs are the adamantanes: amantadine (3, Symmetrel, Endo Health solutions) and rimantadine (4, Flumadine, Impax Laboratories) (Figure 1). These drugs specifically target and inhibit the ion channel function of the M2 protein, which aids in the viral uncoating process after the virions undergo endocytosis and gain entry into a host cell. However, due to a single amino acid substitution occurring in the transmembrane portion of the M2 protein, these drugs no longer have therapeutic effects [1].

Speculation surrounding the exact resistance mechanism acquired by the virus continues, however [9]. The resistance could be due to the ion channel not binding the blocker at all, or the blocker is bound but with no or minimal inhibition, still allowing the flux of protons. Also, particularly for amantadine, there have been documented cases of CNS side effects from the use of these drugs [10]. Regardless, this group of compounds still has potential as future antiviral chemotherapeutics, and this topic will be further examined in the next section of this work.

Both antiviral drugs rimantadine and amantadine have similar damantane-based structures, but differ only by the amine head-group present on the adamantyl moiety. Because this dissertation outlines similar syntheses as those developed for these molecules, the different routes and their development will be examined in the following section.

Amantadine was first shown to have antiviral activity in 1964 and was initially used as a preventative medicine for the influenza A virus when the H2N2 subtype first surfaced around 1966 [1]. The original preparation was published by Stetter et al. in 1960 and eventually patented in 1967 by Paulshock and Watts [11,12]. The synthesis is based on the reaction of adamantane with bromine to give 1-bromoadamantane. A subsequent Ritter-type reaction with acetonitrile and sulfuric acid give the 1-acetylaminoadamantane intermediate, which can be treated with sodium hydroxide to give the final amine product in the hydrochloride salt form amantadine (3) (Figure 4) [11,12].

To avoid using bromine and the harsh conditions that Stetter reported, a modified synthesis of amantadine was later developed by Moiseev and co-workers where the nitrate of adamantanol is the key intermediate instead of the bromo- analog (Figure 5) [13]. In this reaction, adamantane is treated with nitric acid (94%) at room temperature to yield the nitrate intermediate. From this point, the reaction proceeds similarly to the previous method with the formation of a carboxamide species followed by treatment with an aqueous base to give the primary amine. The benefit of this reaction was the ability to have other sensitive functional groups present on the adamantane moiety that may otherwise be destroyed by employing Stetter’s method.

Although rimantadine was discovered around the same time as its closely related predecessor, amantadine, it wasn’t until the 1990s that it was approved by the FDA for influenza infections, although it had previously been used as an antiviral for many years in the Soviet Union [1]. Originally patented in 1967 by Prichard for the DuPont Company, the synthesis of rimantadine consisted of the reduction of the corresponding ketoxime using lithium aluminum hydride (LAH) [14]. In this preparation, the ketone from which the ketoxime is derived can be made via reaction of dimethylcadmium with 1-adamantanecarbonyl chloride. The alkyl ketoxime can then be reduced to the amine using LAH [14,15]. Naturally, the use of dimethylcadmium is problematic due to its toxicity and sensitivity to air, moisture and light. So, to address this issue, an alternative preparation was developed in 1970 by Brake [16].

This synthesis does not require organocadmium compounds, but instead consists of the reductive amination of 1- acetyladamantane to give rimantadine (4). In this preparation, the acetyl compound, hydrogen, ammonia, and metal catalyst (Co, Ru, Ni) are reacted at high temperatures (~250°C) and pressures up to 15,000 psi (Figure 6) [16]. Although more appealing than the previous synthesis, this process is still highly unfavorable for a commercial scale operation, requiring specialized equipment to handle such high pressures and temperatures.

In 1985, a new synthetic approach to rimantadine was patented by Liu, again out of the DuPont Company [17]. This new preparation addressed the high temperature, high pressure requirements, and utilized 1-adamantyl methyl ketoxime as the starting compound. The reduction of the ketoxime with hydrogen gas and a metal catalyst (Pt on carbon) could be carried out using lower temperatures (10°C-60°C) and lower pressures (25 psi-215 psi) as described in Figure 7 [17]. This procedure proved to be more commercially accessible than previous routes.

Figure 7: A lower pressure and temperature synthesis of rimantadine (4).

Several other reports of rimantadine preparation can be found, with one of the more interesting pathways being synthesized by Liu starting from 1-adamantanecarbonitrile [18]. In this process, the nitrile moiety is alkylated using either methyllithium (CH3Li) or a methyl Grignard reagent (CH3MgX, X=Cl, Br), followed by reduction with LAH or catalytic hydrogenation of the imino intermediate (Figure 8) [18-35].

Figure 8: A versatile preparation of rimantadine (4) developed by Liu.

This versatile procedure easily allows for the introduction of various alkyl groups, which could be useful in creating a set of analogs for testing antiviral activity.

With the renewed interest in discovering novel M2 ion channel blockers, alternative syntheses (Figure 9) can be examined to provide the synthetic utility needed to yield various derivatives. The work outlined in this dissertation examines unique routes to prepare 2,4,9-trithiaadamantane derivatives, some of these routes are related to the previous work just discussed.

The prevalence of chronic viral infectious diseases, such as human immunodeficiency virus (HIV), hepatitis C virus (HCV), and influenza virus; the emergence and re-emergence of new viral infections, such as picornaviruses and coronaviruses; and, particularly, resistance to currently used antiviral drugs have led to increased demand for new antiviral strategies and reagents. Increased understanding of the molecular mechanisms of viral infection has provided great potential for the discovery of new antiviral agents that target viral proteins or host factors. Virustargeting antivirals can function directly or indirectly to inhibit the biological functions of viral proteins, mostly enzymatic activities, or to block viral replication machinery. Host-targeting antivirals target the host proteins that are involved in the viral life cycle, regulating the function of the immune system or other cellular processes in host cells. Here we review key targets and considerations for the development of both antiviral strategies. Above detailed information synthesized the molecule amantadine hydrochloride 1. It produces a total yield of 60% over two steps and a purity of 99%. The synthesis of amantadine (4) from amantadine (2) was successfully accomplished in one step via the Ritter reaction. This method does not require liquid bromine or fuming nitric acid as reactants. The subsequent conversion of amantadine (4) to amantadine (5), and then amantadine (5) to amantadine (1), was carried out under milder reaction conditions without using hazardous solvents. These advantages facilitate the efficient, cost-effective and industrially convenient production of amantadine hydrochloride. 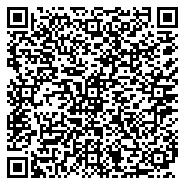