This study compared a standard PEG protocol with a bowel cleansing by low-pressure water infusion into the colon (Prep System, Lifestream®, Austin, TX). 104 patients were randomly assigned to either a split-dose 2 L+2 L PEG or the Prep System, after 5 days low residue diet. Prep System cleansing consisted of infusion of 2 × 35 L water at 37°C, by gravity into the rectum, over one hour. Quality of bowel cleansing was assessed with the Boston bowel prep score (BBPS) by a colonoscopist who was blinded to the pre-procedural preparation. Groups were comparable for age, sex and colonoscopy indication. The total median (7 in both groups), and segmental BBPS scores were not different between groups. Mean duration of colonoscopy, blood electrolytes after bowel cleansing and patient satisfaction (89% in the prep system and 76% in the PEG) were not different in the 2 groups. Adverse events, mainly nausea, were more frequent in the PEG group (P=0.03). In the setting of this study, the prep system appeared as effective as the split-dose PEG for bowel cleansing before colonoscopy. Patient tolerance of the prep system was good.

Adequate bowel cleansing is a paramount parameter influencing the completeness and the diagnostic yield of colonoscopy. In daily practice, 20- 25% of colonoscopies are inadequately prepared [1-4]. This has a significant impact on the need for repeat colonoscopy which is shorter than recommended screening or surveillance intervals. The consequent impact to the patient as well as the economic adverse implications for patients and payers are significant. The accuracy for defining adenomas is lowered if the preparation is deemed inadequate. Moreover, in CRC screening programmes, some subjects may decline the offer of a screening colonoscopy because of the fear of bowel cleansing [5]. The Angel of Water device (manufacturer Life stream, Austin, TX), referred as the prep system, was initially developed for comfort colonic hydrotherapy for institutes promoting “wellbeing”. Little data has been published about the tolerance of the procedure but it appeared to not alter blood electrolytes [6]. To test the hypothesis whether the prep system could be used for bowel cleansing before a colonoscopy, we designed a randomized controlled non-inferiority study comparing its efficacy with that of a split-dose oral cleansing protocol.

Patients with an indication of colonoscopy aged 18-80 years were included. Exclusion criteria were: history of colonic surgery, abdominal hernia, clinical suspicion of bowel obstruction or colonic stenosis, acute flare of inflammatory bowel disease, pregnancy, uncontrolled heart disease or renal insufficiency, weight >182 kg, known allergy or hypersensitivity to PEG. The study protocol was approved by the Regional Ethics Committee. Written informed consent was obtained from all patients. The trial was registered on Clinicaltrials.gov under NCT 01871584. The device for water infusion Angel of Water® (Lifestream, Austin, TX – FDA clearance K003720, June 27, 2002; CE-Mark 504677, May 22, 2006) is constituted of a 35L water tank maintained at 37°C by a heating system (Figure 1). Water is filtered through ionic and ultraviolet filters and infused by gravity through a single-use cannula, into the rectum (Figure 2) in 20-30 minutes. The patient sits on an adapted seat allowing easy passing of water and evacuation of feces, in a semi-reclined position. At the end of the procedure, the patient is asked to evacuate the remaining colonic content in the toilet, before transfer to the endoscopy Unit where colonoscopy is carried out within one hour after completion of the cleansing procedure. To avoid formation of a bacterial biofilm in the internal circuit, a disinfection of the tubing with a light bleach solution (225 ml of 2.6% ac bleach) was enforced every day, followed by a thorough rinsing with water. Water was sampled 48 hours after each disinfection by the Hospital Hygiene Laboratory and cultured in accordance with standards enforced by the French legislation (NF ENISO6222, NFENISO16266) and NF ENISO9308-1). The external cleansing of the device was completed after each use with detergent and disinfectant products routinely in use in our hospital for non-critical surfaces (Aniosurf premium®, Laboratoires Anios®, Lille-Hellemmes, France) and validated at an European level (European standard tests EN 1040, EN 1276, EN 13727, EN 1275 and EN 1650). 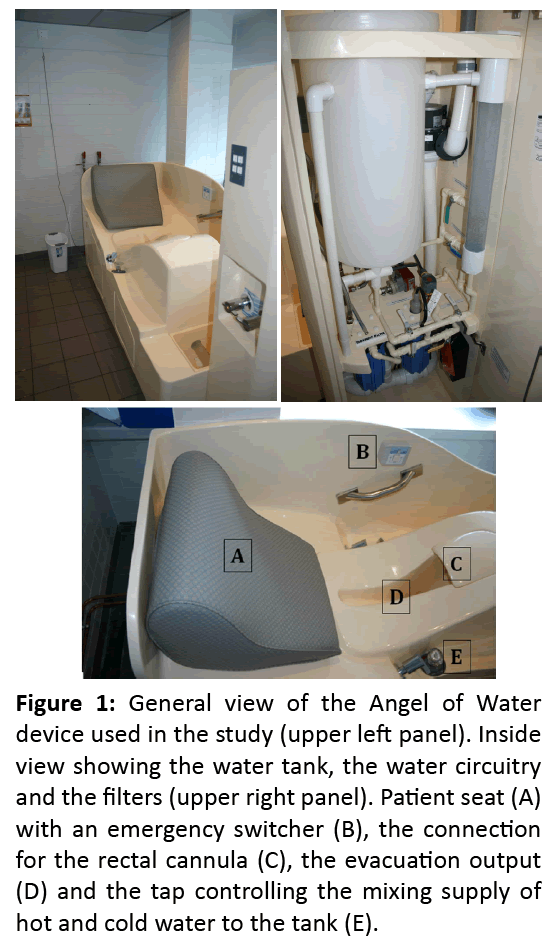 Figure 1: General view of the Angel of Water device used in the study (upper left panel). Inside view showing the water tank, the water circuitry and the filters (upper right panel). Patient seat (A) with an emergency switcher (B), the connection for the rectal cannula (C), the evacuation output (D) and the tap controlling the mixing supply of hot and cold water to the tank (E). 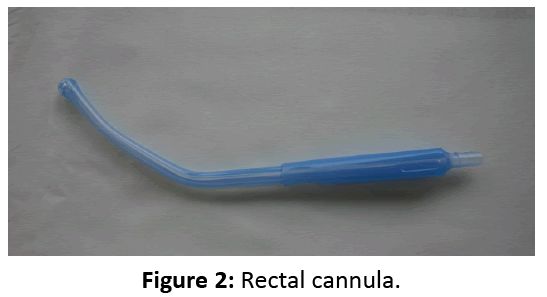 All patients followed a 5 days low-residue diet before the colonoscopy. Patients admitted in the clinical unit on the day before the colonoscopy were assigned consecutively alternating to each study arm - the Prep System group or the PEG group, based on the order of inclusion and signed the written informed consent. In the Prep System group, senna (Pursennide 80 mg, Novartis, Rueil Malmaison, France) was administered orally the evening before the colonoscopy [7]. In the morning of the scheduled colonoscopy, patients underwent 2 cycles of water infusion. In the PEG group, patients were administered orally 2 L of PEG (Klean Prep®, Norgine Pharma, Rueil Malmaison, France) the evening before colonoscopy and 2 L the morning of the procedure. In both groups, blood electrolytes were checked at the end of the cleansing protocol.

The primary endpoint of the study was the quality of the bowel cleansing assessed with the BBPS [8]. The colonoscopists were blinded to the type of bowel preparation. General anaesthesia was used. Secondary endpoints included acceptability of the bowel cleansing by the patient, side effects and duration of the colonoscopy and microbiologic monitoring for safety of the water infusion system. Acceptability was assessed by 5-point Likert scale encompassing overall ease of preparation (“very easy” to “unable to complete”) and binary yes or no questions about nausea, abdominal pain, vomiting or bloating. All colonoscopies were performed by certified gastroenterologists with more than 1,000 colonoscopies performed and an annual average number over 500.

Statistical analysis was performed with the Analyze-it software (Analyze-it Software Ltd, Leeds, UK). All efficacy analyses were performed per protocol. BBPS from both groups were compared with Mann-Whitney U test. Demographic data and other parameters were analysed in both intention to treat and per-protocol conditions, continuous variables, with the Student t test and others with the Pearson chi-square test. A P value ≤ 0.05 was considered significant.

Table 1: Demographics and indication of colonoscopy for patients included in the randomized trial.

Tolerance of the bowel cleansing

Blood electrolytes before and after bowel cleansing were not statistically different between groups. Adverse events are reported in Table 3. Nausea was significantly more frequent among patients in the PEG group (32%) than in the prep system group (14.5%) (P=0.03). Mild rectal mucosal abrasions induced by the cannula were observed in patients of the Prep System group. These were all deemed not clinically significant by the colonoscopist.

Table 3: Side effects observed after bowel cleansing in the Prep System and PEG groups.

No case of intestinal infection was reported in patients undergoing bowel cleansing with the Prep System during the clinical follow-up of the patients.

Patient satisfaction after the bowel cleansing

The difference in patient satisfaction scores was not statistically significant between groups (Figure 4) with a good to excellent score in 89.6% in the Prep System and 76.0% in the PEG groups.

Figure 4: Acceptance of the cleansing protocol by the patients: Comparison of Prep System and PEG groups.

During the study, as a safety endpoint, a careful sanitation protocol was evaluated for disinfection of the device before each session of the Prep System group. No patients developing symptoms of enteric infection after the procedure. However, particular attention should be paid in future clinical use to careful disinfect the device and monitor the patients after the procedure to further demonstrate the absence of infectious risk.

The use of the Prep system in daily practice will need to take several points into account. As previously observed, the time between the end of the preparation and the colonoscopy influences the quality of the bowel cleansing [9,10]. In our study, we managed the schedule of the preparation and the colonoscopy so that the time in between them did not exceed one hour. We would also emphasize the important role of a dedicated nurse monitoring the prep system usage, for safety of the patient and efficiency of the method. Manual massage of the abdominal wall during the infusion of water is recommended by the manufacturer as it seems to help the water flow to reach the caecum and improves the quality of bowel cleansing. A nurse may help elderly or disabled patients to perform these massages or remind other patients about their importance. Finally, the duration of the colonoscopy did not significantly differ between the Prep System and the PEG groups. The presence of clear fluid in the colon is not decreasing the rate of caecal intubation as some recent studies have suggested that water infusion into the colon might facilitate the progression of the endoscope [11,12].

Actual indications of the Prep System need to be better defined in larger randomized trials. We excluded patients with suspicion of colonic stenosis, history of surgery of the colon or active flare of IBD. The advantages of the method let anticipate possible indications, such as screening colonoscopies in patients reluctant to oral lavage solutions, elderly patients or patients with comorbidities such as renal or cardiac insufficiency. A few elderly patients (age >75 years were included in our study and tolerated well the Prep System, achieving a good Boston Bowel Prep Score. However, efficacy and tolerance of the Prep System should be further investigated in special patient subgroups.

US National guidelines have emphasized the problem with inadequate preparation for colonoscopy [13]. These problems include intolerance of the prep, inadequate results - all of which then have significant impact on important benchmarks for quality- including adenoma detection rate, compliance with recent USA national screening/ surveillance recommendations, and the new threshold benchmark for adequate preparation, now set at 85%.

Additionally, the ESGE published Guidelines for adequate preparation and propose the standard that at least 90% of screening examinations should be rated as having “adequate” or better bowel cleansing [14]

The influence of the Prep system on healthcare costs must also be taken into account: investment in material and human resources (time for sanitation and maintenance of the device, monitoring of the procedures by dedicated nurses). It requires an improved organization of the endoscopy practice, avoiding long waiting times between the end of the bowel cleansing and the start of the colonoscopy. However, any method helping some patients to undergo a more effective colonoscopy should not necessarily be seen as an increase in overall cost. In the future, the organisational logistics to utilize the prep system could be facilitated by the development of outsourced lines of service by physicians performing colonoscopy to a central center for same day preparation, supporting the flow of patients to same day colonoscopy. The feasibility and viability of this setting needs to be further evaluated. It nevertheless constitutes an appealing alternative to oral preparations (and related intolerance or inadequacy) for many patients.