Background: Pituitary Adenylate Cyclase Activating Peptide (PACAP) has a significant protective effect on nerve cell damage induced by several neurotoxins. The ubiquitin proteasome inhibitor lactacystin, one new neurotoxin, could cause cell damage by inducing dopaminergic cells apoptosis. Whether PACAP has a protective effect on lactacystin-induced cytotoxic model has not been reported.

Aims: The present study was designed to explore whether PACAP can effectively inhibit the lactacystininduced dopaminergic apoptosis.

Results: Treatment with lactacystin can make the cell vitality obviously decline. Compared with control group, cell morphology presented obviously damaged change in lactacystin group. After treatment with lactacystin, the expression of mitochondrial bcl-2 dramaticly decreased, expression of mitochondrial bax had no change, the rate of bcl-2/bax dramaticly decreased, and thus expression of caspase-3 increased. Meanwhile, caspase-12, the characteristic marker of endoplasmic reticulum stress, increased significantly in lactacystin group. However, these changes could be partly reversed by treatment with PACAP1-27. This protective effect of PACAP1-27 was negated by PACAP6-27, a receptor antagonist of PACAP1-27.

Parkinson's disease is a clinic common neurodegenerative disorder, and characterized by the progressive loss of dopaminergic neurons in the substantia nigra. There is still no effective therapies [1]. In order to investigate the pathogenesis of Parkinson's disease and find effective treatment, we need to establish experimental Parkinson's disease cell model. Many scholars used methyl-phenyl-tetrahydropyridine and 6- hydroxy-dopamine for preparation of Parkinson's disease cell model, but both models are characterized with lack of Lewy body. Rideout et al. [2] applied lactacystin in bare PC12 cells and PC12 cells differentiated by nerve growth factor, and found a dose-related drug-induced cell death, the death can be inhibited by caspase inhibitor. They also found that the ubiquitin-stained positive inclusion bodies in living cells, and human α-synuclein homologous synuclein-1 staining also showed positive results. The cell model induced by lactacystin mimics the Lewy bodies of the Parkinson's disease and apoptosis [3-5].

PACAP is a neuropeptide with multiple effects, and belongs to the secretin/glucagon/vasoactive intestinal peptide family. There are two structural forms: PACAP27 and PACAP38. PACAP27 can spread freely across the blood-brain barrier in non-saturation manner [6]. PACAP27 may have potential practical value. PACAP27 has two forms: PACAP1-27 and PACAP6-27. Some studies have found that PACAP1-27 has a significant protective effect on nerve cell damage induced by excitatory amino acids, β-amyloid and prion protein [7]. But whether PACAP1-27 has a protective effect in lactacystininduced cytotoxic model has not been reported. Therefore, the study explored the protective effect of PACAP1-27 and its related molecular mechanisms in lactacystin-induced cytotoxic model.

This was designed as a controlled cell study. Experiments were performed at the central laboratory, Yantai Yuhuangding Hospital, Yantai, PR China, between April 2011 and November 2013.

MTT assay: The viability of cultured cells was evaluated using the MTT colorimetric assay. MTT is an indicator of mitochondrial respiration and MTT reduction is mediated by active mitochondrial succinate dehydrogenase in living cells, which has commonly been used to infer cellular viability. MTT reduction was quantified at 570 nm using a micro-plate reader.

Western blots: Cells were collected and washed with ice-cold PBS and lysed in lysis buffer. After incubation for 20 min on ice, cell lysates were centrifuged (10,000 g for 10 min at 4°C) and the protein concentration in the extracts was determined using a bicinchoninic acid protein assay kit. Samples were resuspended in Sodium Dodecyl Sulfate (SDS)-polyacrylamide gel electrophoresis sample buffer and boiled for 5 min. A volume of 20 μl of solubilized total cell lysate (15 μg protein) was loaded per lane of a 10% polyacrylamide gel for carrying out SDS-polyacrylamide gel electrophoresis, followed by transfer onto a polyvinylidine fluoride membrane at 120 V for 120 min at 4°C using a Mini Trans-Blot Cell apparatus. Membranes were blocked for 60 min at room temperature (25°C) using 5% skimmed milk powder in Tris-buffered saline (TBS; 10 mM Tris-HCl, 150 mM NaCl, PH 7.4 ) and then probed with GAPDH antibody, rabbit anti-rat caspase-3 (1: 500), caspase-12 antibody (1: 500) and bcl-2 (1:500), bax antibody (1: 500) overnight at 4°C The blots were washed three times in TBS-T (with 0.05% tween-20) at room temperature and then incubated with horseradish peroxidaseconjugated secondary antibody diluted in TBS-T (1:2,000) for 1 h at room temperature, followed by washing four times. Signals were detected with a chemiluminescence kit. The blots were then removed from the working solution and exposed to Kodak Biomax MS-1 films (Sigma) for 0.5-3 min. Quantitative analysis of Western blots was carried out by calculating the relative density of the target bands. To reduce the differences, values of each band of sample were compared with that of GAPDH.

The cell viability of each group 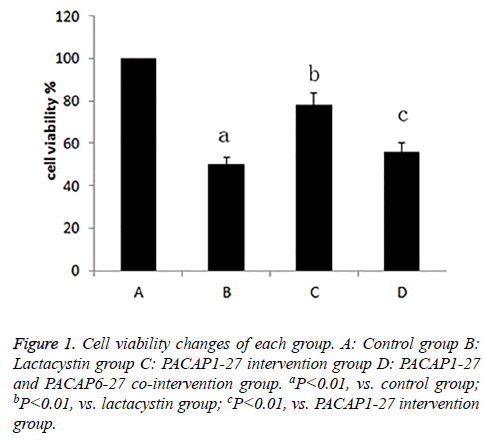 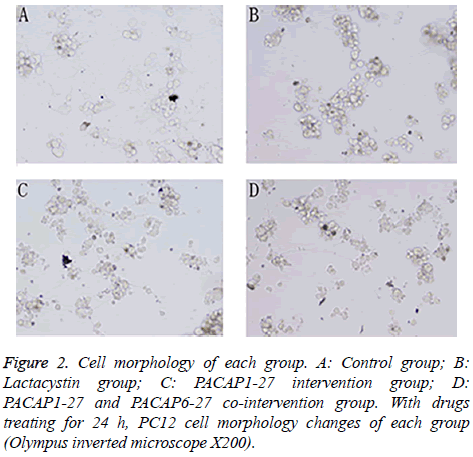 Western blot analysis of apoptosis protein expression of each group 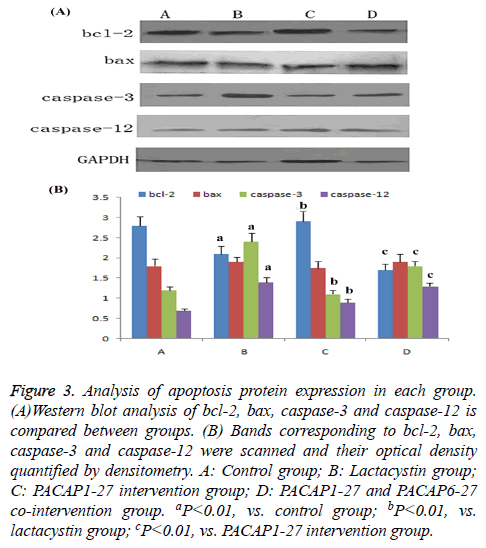 Parkinson's disease models with Lewy bodies established using lactacystin reveals the proteasome function of substantia nigra cells impaired, not only cannot clear α-synuclein and other proteins of cytoplasm in time, but also is an important factor in the formation of Lewy bodies and substantia nigra degeneration eventually led to Parkinson's disease, and provides an ideal experimental model for further research [2].

PACAP is an endogenous neuropeptide with a diverse array of biological functions including anti-apoptosis, antiinflammation and anti-oxidative stress [8-10]. And PACAP plays the anti-apoptosis role by regulating the cell expression of apoptosis-related protein caspase-3, bcl-2, bax, caspase-12 etc. [11]. PACAP is widely distributed in the central and peripheral nervous system [9]. PACAP is non-toxic in its own, and can easily cross the blood-brain barrier from the circulation into the brain parenchyma in a very short time following intravenous or intraventricular injection. Therefore, PACAP is a powerful emerging candidate as a therapeutic for neurodegenerative diseases. Different neurotoxins can cause caspase-3 activity increase and finally damage to cells [12], PACAP1-27 can inhibit this increase of response [13,14]. Our results show that lactacystin significantly increase the caspase-3 activity in PC12 cells, PACAP1-27 can indeed inhibit this increase. We found that this protective effect can be reversed by specific antagonist PACAP6-27 of PACAP/VIP typeI receptor (i.e. PAC1), and previous studies have found PAC1 receptor mRNA expression in PC12 cells does exist [13,15,16], we speculate that the inhibition effect of PACAP27 on the cell apoptosis induced by lactacystin may be mainly mediated by PAC1 receptor, and PAC1 receptors are the key parts of lactacystin-induced apoptosis process. Meanwhile, the study further discussed the involved molecular mechanisms of the protective effect of PACAP1-27. It is known that mitochondria-mediated pathway is accounted for the most important position in apoptosis [17-19].

There are soluble proteins in the mitochondria, such as cytochrome C. Once triggered, a large number of neurotoxic factors can cause increased permeability of the mitochondrial outer membrane [20], bcl-2 protein family are important effectors of the mitochondrial outer membrane permeability [21], capable of forming lipid pore enough for cytochrome C to transverse and release into the cytoplasm, resulting in caspase-3 activation and apoptosis [22,23]. Intracellular ratio of bcl-2 and bax regulates the happen of apoptosis. This study confirmed that expression of bcl-2 decreased after treatment of lactacystin, bax expression levels did not change, bcl-2/bax ratio decreased. We can speculate lactacystin make mitochondrial permeability transition pore opening and mitochondria releasing cytochrome C by inhibiting the expression of bcl-2, reducing bcl-2/bax ratio, inducing bax activation and shifting to the mitochondria, which may further trigger caspases cascade reaction leading to apoptosis. PACAP could reverse the toxic effect of lactacystin, as demonstrated in the results. These findings indicated that PACAP played a protective role by regulating the mitochondrial related signal pathway.

Our research for the first time shows that PACAP1-27 can effectively inhibit lactacystin-induced casapase-3 and caspase-12 increases, and PACAP6-27 can antagonize this effect, suggesting that PACAP1-27 plays a protective role by regulating the mitochondrial and endoplasmic reticulum related dual signal pathway. Further studies are required to explore more detailed mechanisms of the observed effects.

Lina Guan, Guoping Yu, and Yongqiang Ji designed the research, performed the experiments, interpreted the data and wrote the manuscript. Ning Li helped with the interpretation and analysis of the data. Chao Ren supervised, headed and financed the work and helped editing the manuscript. Maowen Ba and Peiwen Lian supervised the project, designed the research and interpreted the data. All authors read and approved the final manuscript.

This study was funded by the Shandong Provincial Natural Science Foundation, China (No.ZR2010HM117), Yantai Science and Technology Planning Projects (No.2010148-6) and National Natural Science Foundation of China Projects (No. 81501185), Project 2016WS017 from Yantai Science and Technology Planning Projects. The authors would like to acknowledge the Central laboratory of Yantai Yuhuangding Hospital for the use of their laboratory facilities.