Therapeutic development and drug discovery processes are heavily challenged by delays in the preclinical experimental stages before being offered for Phase 1 clinical trials. Accelerating the preclinical phase via novel in-vitro systems is need of the hour to help provide effective therapeutics to cure diseases like cancer. Therapeutics to treat different diseases need to be developed through a systematic process to understand the uses, adverse effects, and mechanism of action of a prospective drug. Cutting edge computational models offer promising future tools. The Virtual Embryo like approaches may help reliable prediction and fast chemical risk assessment for the developmental toxicity testing domain. Recent advances in stem cell technologies may be used to reduce the use of laboratory animals and accelerate the testing of novel drug molecules along with immense future possibilities and improved research methods to work with. The following review provides an insight into the productive use of Embryonic Stem Cells, whether mouse or human, and how the use of stem cells technique has played a key role in improving drug development and therapeutics.

In April 2017, Developmental and Reproductive Toxicology Technical Committee of the International Life Sciences Institute (ILSI) Health and Environmental Sciences Institute (HESI) hold a workshop to address the question of adopting an alternative approach to address the developmental toxicity other than that of experimenting on the pregnant laboratory animals. The approaches emerged were mainly of the themes including human cells, tissues or computer simulations of human development [1]. Nevertheless, it is a slow process and leap over a century to adapt the research design and develop a consensus to measure the outcomes with reliability and authenticity. The Biological systems are complex enough to be successfully modelled in a laboratory but still there are possible toxicity testing approaches that when adopted may help to reduce the animal testing. One example being CompuCell3D which is an open-source modeling environment made available by NIH and EPA [2].

EPA, US Environmental Protection Agency offers ToxCast web portal that has data over 9000 chemicals along with the information of above one thousand high-throughput assay endpoint components. The chemicals and assays can be used as combinations or independently to research into the relevant biological activity. Being not only a resource but also a preliminary prediction for multiple chemicals, this is a next generation tool to move towards the laboratory animal free era of testing drug toxicity [3]. The adverse outcome pathway study in embryo development for the retinoic acid is an example where the pathways may be mapped among multiple genes, giving rise to a model that may help to understand the network and inter-relationship among genes [4]. This is one model and to develop such a model needs detailed and extensive researchbased information.

Such models are the future of developmental testing and foundations of predictive toxicology.

Developmental toxicity is all about knowing the adverse outcomes of a chemical on the developing embryo. Virtual Tissue Models: Predicting how chemicals impact development are the developmental models simulating critical development steps used to predict the way a chemical may affect a human development. The biggest advantage of such an approach is much faster, better and reliable chemical risk assessments [5]. Hutson et al., have used to predict the chemical exposure effects on palatal shelves [6]. Another example being examining the effects of androgen-dependent growth of the genital tubercle [7].

Stem cell-based in-vitro systems are one of emerging strategies replacing animal testing in developmental toxicology [8]. These include systems using mouse Embryonic Stem Cells (mESC) and human Embryonic Stem Cell (hESC) lines. Teratological effects of a compound or a drug have traditionally been assessed by animal testing [9]. Now with advancements in laboratory techniques, alternatives are available to avoid the use of live animals [8]. Moreover, the ethical and legal implications advocate cutting down the use of animals for testing purposes [9].

The Embryonic Stem Cell Testing was developed in 1997 based on a blastocyst-derived permanent mouse Embryonic Stem Cells (mESC) [10]. To establish toxicity of a compound, the endpoints used in this testing system were the inhibition of growth and the inhibition of differentiation of mESC into cardiac muscle cell precursors (over ten days of treatment). Contracting myocardiocytes, as an endpoint, may detect toxicity at two levels; a) structural level, where the precursors differentiate into myocardiocytes and, b) functional level, by detecting the contractibility of differentiated cells [11]. Kloet SK et al. indicated developmental toxicity of positively charged nanoparticles on mouse embryonic stem cell differentiation (ES-D3) while negatively charged nanoparticles did not affect ES-D3 cell differentiation. This study showed the concentrationdependent inhibition of ES-D3 cells into cardiomyocytes after being exposed for upto ten days [12]. Toxicological studies related to embryotoxicity are grouped as Developmental Toxicological Research. Mouse Embryonic Stem Cell systems are preferred over the hESCs due to their easy availability but still there are differences at the mechanistic level of cellular differentiation between the two types of cells. Therefore, embryonic stem cell (ESC) testing is growing rapidly towards the use of hESC lines [9].

One of many advantages of using hESC over mESC is the ability to test a compound directly on human cells, rather than on animal cells, thus providing direct rather than indirect evidence of its toxicity. It helps to avoid the historical experiences with thalidomide and isotretinoin. These compounds were tested on animals and identified as non-teratogenic drugs, but later on, proved to be highly teratogenic for human species [9]. Human Embryonic Stem Cell (hESC) lines differentiate, in-vitro, into three distinct germ layers ectoderm, mesoderm and endoderm. Therefore, hESC can be used to test the toxicity of a drug during embryonic development, in reference to differentiation into a specific germ layer cells. For example, developmental toxicity of methylmercury was successfully studied with hESC. With the help of hESC model, it was established that this chemical affects at the level of neuronal precursor cells rather than the later stages of brain development. Transcriptomic neuronal markers, mRNA, were used as endpoint in this study [13]. The developmental toxic effect of a toxicant can be tested on hESC through a variety of endpoints. One of the endpoints is the cell migration assay, for example neural crest cell migration assay, done by quantification of number of migrated cells in relevant biological systems [14].

However, using the hESC system for mechanistic developmental toxicity of a certain compound needs a baseline or a comparator or a predefined control [15]. To calibrate the assay of a chemical, it is essential to have a gold standard compound with reliable in vivo studies or human epidemiological available data [15]. Very few such gold standard compounds are available and, even if available, may not behave in the same way while being tested in-vitro. The suggested solution is to let the test system undergo mechanistic validation on the basis of tool compounds before testing the experimental compound. These compounds validate the system in terms of expected biochemical and signaling pathways. Once such a set of tests is defined, the interested compound can be experimented with and comparing the results against the known representative signaling pathways, the tested compound may be labelled as hazardous or safe [15]. One such attempt was the ‘human Embryonic Stem Cell derived novel alternative test system (ESNATS)’ European commission research project. This project established transcriptome profiles to standardize the developmental neuro-toxicants testing, by using valproic acid and methylmercury as positive control compounds [16].

There are many benefits of using the ESC systems such as being cost and time effective. Biotechnology and pharmaceutical companies may use ESC systems to test the new drugs early on during the drug development protocol thus quickly inferring the effective compounds and making them available earlier for therapeutic purposes [9]. Enough quantities of embryonic stem cells can be made available for screening of compounds and testing for the toxicity, without any ethical or legal issues. Moreover, hESC is species specific and so far an ideal system to test the drugs for human uses [9]. ESC systems can be improved with sufficient amount of research in order to develop new, better and more reliable protocols for detection of drug responses. Clearly defined, appropriately chosen and validated endpoints are essential for reliable toxicity testing. Standardization of culture conditions for embryotoxicity screening may improve the reproducibility of the results [17]. Differences in ESCs lines’ differentiation capacity may introduce variability and bias in the results of toxicity testing experiments. It can be addressed by developing, beforehand, a uniform protocol [17] (Figure 1). 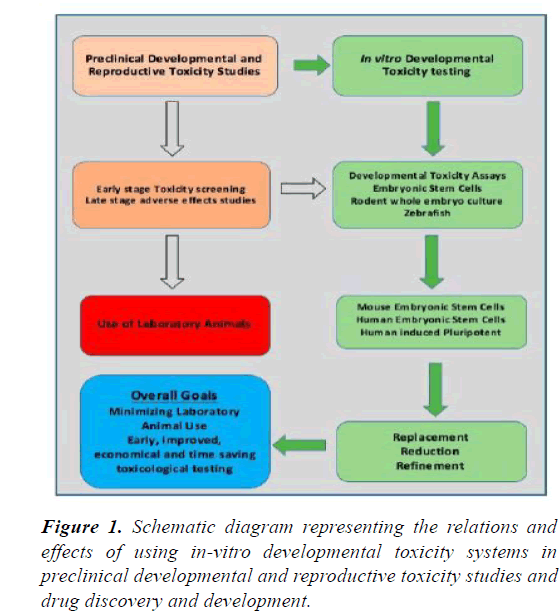 The efficacy of EST has been improved with the development of molecular fluorescence activated cell sorting (FACS)-EST system. This system has better sensitivity and requires seven days as compared to ten days for completion of testing compound toxicity. Quantitative flow cytometry of cardiomyocytes marker proteins of mESC in this new technique is comparable in validity and sensitivity to established EST protocols [18,19]. ES cell systems are promising alternative in-vitro techniques, to animal testing in the developmental toxicology that is being studied and improving at fast pace. mESC and hESC lines serve the purpose but using hESC is limited by regulations too, therefore, human induced pluripotent stem cells (hiPSC) are preferred after recent teratogenic transcriptome-based predictive test with improved validity as promising in-vitro toxicology study tool. Mouse embryos developed by the mouse embryo stem cells and inducing mouse iPSCs to develop germ cell line are future directions of testing developmental and reproductive toxicity in toxicology laboratories.