Background: In this study we present the retrospective analysis of photodynamic therapy with photosensitizer Photolon using the data obtained from 130 patients with basal cell carcinoma (T1N0M0, I stage).

Methods and findings: The treatment was easily tolerated by the patients and high therapeutic and cosmetic effects were obtained after Photolon injection of 2-2.5 mg/kg and subsequent irradiation by the laser with wavelength 660 nm in light doses 50-200 J/cm2. Complete regression of primary and recurrence carcinomas was observed in 90.9% and 88.9%, respectively. In terms of the observation of 3 to 76 months of local tumor recurrence was detected in 7.7% of cases (n=10).

Conclusion: Photodynamic therapy of basal cell carcinoma with Photolon can be recommended when there are complications with traditional treatment of the disease.

Basal Cell Carcinoma (BCC) is a serious social and medical problem of modern oncology. BCC is a very common malignancy, accounting for 75% to 77% of non-melanoma skin cancers and affecting around two million people each year, with a steadily increasing incidence [1]. Despite the minimal risk of metastasis of this type of tumor (0.0028-0.5%), BCC is locally invasive and can infiltrate and destroy the subcutaneous tissue, bone and cartilage, reaching vital structures (major vessels or central nervous system); complications like bleeding and infections can affect the prognosis of patients, especially when elderly and debilitated [2].

The main methods of treatment of BCC are surgical excision, Mohs microsurgery, curettage with or without electrosurgery, cryosurgery, topical cytostatic drug preparations (5-fluorouracil 5%, imiquimod 5%) and radiotherapy [3].

Today, the search for new and effective methods of treatment of BCC with high efficacy, minimal amount of adverse reactions and complications, and good cosmetic effect is topical. One of the promising directions in the treatment of this pathology is the Photodynamic Therapy (PDT), which a treatment method is based on the significant increase of the cytotoxicity of drugs with photo irradiation of the tumor tissue. According to numerous studies of photochemical reactions include a direct interaction of excited molecules with the help of photo irradiation the Photosensitizer (PS) on the substrate and forming transient radicals that react with oxygen. Interaction initiates a complex cascade of free radicals, such as singlet oxygen (1O2), hydroxyl radical (.OH), hydrogen peroxide (H2O2) and superoxide anion radical (.O2-), causing the development of oxidative stress syndrome. As a result, PDT effectively induced tumor-cell apoptosis and necrosis. The two possible mechanisms might be: a) Promoting mitochondria to release Cyto-C and activate Caspase-3, then to initiate apoptosis; b) The destroying of microvessels, inhibition of angiogenesis and the induction of ischemia and anoxia of tumor cells, resulting in ischemic necrosis [7,8].

In the Europe, considerable experience has been accumulated in the use of PDT with hematoporphyrin, phthalocyanine and chlorine derivatives in the treatment of BCC. Essential shortcomings in the use of hematoporphyrins and phthalocyanines are the limited penetration depth of laser radiation (3-8 mm depending on the wavelength), the long period of cutaneous phototoxicity (for synthetic derivatives) and the high cost of the photosensitizers [9-11].

The aim of this study is to evaluate a safety and antitumor efficacy of PDT with chlorine-based photosensitizer Photolon for treatment patients with basal cell skin carcinomas.

PDT was performed in 130 patients (59 male, 71 female) with morphologically verified BCC (T1N0M0, stage I). The average age was 57 ± 9 years. In the overwhelming majority of patients (n=103), the primary focus was located in the face (nose, cheek, forehead). In 10 patients there was a recurrent form of BCC, in 120-primary form.

The study was approved by local ethic committee. Patients signed informed consent to procedure in compliance with Helsinki declaration of 1964 (revised 2013).

PS «Photolon» (RUE Belmedpreparaty, Republic of Belarus), which is a complex of chlorin e6 trisodium salt with polyvinylpyrrolidone, was injected intravenously at a doses of 2-2.5 mg/kg body weight, in a darkened room.

The tumor photoirradiation session was carried out 2.5-3 h after the injection of PS with the use of a semiconductor laser «UPL PDT laser» («BelOMO», Republic of Belarus, λ=660 nm ± 5 nm).

The exposure doses was varied from 50 J/cm2 to 200 J/cm2, power density of laser radiation from 0.1 W/cm2 to 0.52 W/ cm2 and the duration of photoirradiation of one focus varied depending on the size and location of the tumor and ranged from 3 to 30 min. The area of irradiation included a section of healthy tissue, retreating from the edge of the tumor to 5 mm.

The tolerability and safety of the PDT session was assessed based on the criteria CTCAE (Version 4.03).

Clinical and cosmetic outcomes were evaluated after 1, 3 and 6 months. Clinical outcome was evaluated visually and morphologically by cytological or histopathological examination.

Performance criteria were as follows (according to WHO, 1979):

1. Complete Regression (CR)-absence of all signs of the disease, 100% resorption of tumor foci in 1 to 3 months after PDT;

2. Partial Regression (PR)-reduction of the total tumor size by 50% or more with subsequent stabilization established after 1 month and confirmed 3 months after the PDT session;

3. Stabilization of the process-no increase in the size of the tumor nodes, the appearance of new nodes or other signs of disease progression within 3 months;

4. Progression of the process-an increase in the total size of the tumor node by 25% or more, or the development of new foci.

Estimating skin phototoxicity, it should be noted that in all patients, who observed the light regime for 3 to 4 days after the PDT session, avoiding direct sunlight, complications in the form of skin burns of various degrees and the development of hyperpigmentation was not observed. In 10 cases (7.7% of patients) of intentional or unintentional non-compliance with the recommendations, light hyperemia itching and burning of externally exposed areas of sunlight skin, passing for several hours.

It should be noted that all local relapses were detected in patients of two categories, namely:

1. Patients with ulcerative-nodular forms of BCC;

To illustrate the effective use of PDT in patients with BCC, we give the following clinical examples (Figures 1-3). 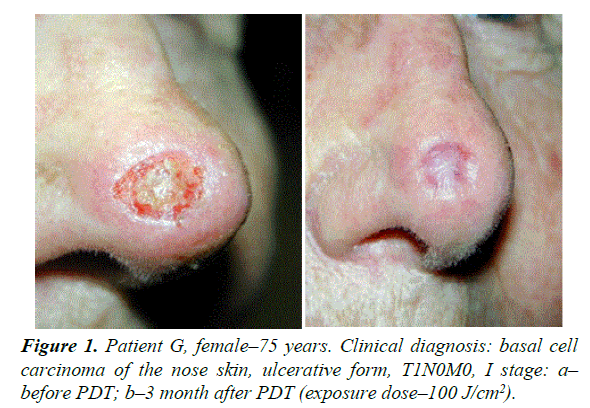 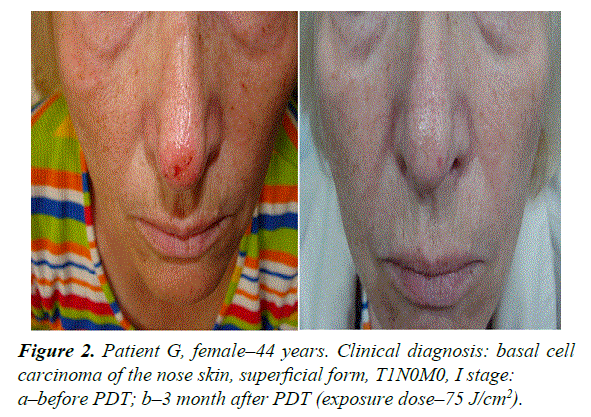 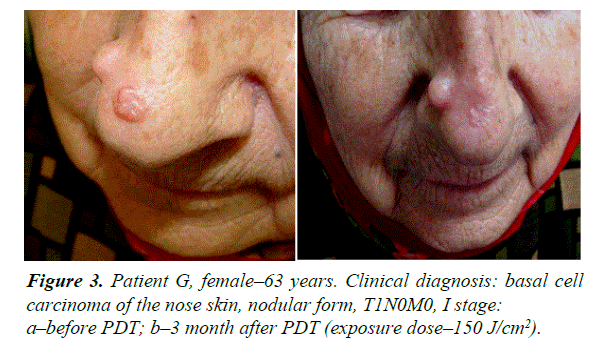 The results of PDT with Photolon for 130 patients with BCC of the skin make it possible to conclude that this method of treatment is well tolerated, safe, effective and can serve as an alternative to the traditionally used surgical and radiotherapy. First of all, this concerns patients with «inconvenient» cases of tumor localization on the skin of the eyelids, the auricles and the nose region. PDT allows avoiding the emergence of possible cosmetic defects after excision of such neoplasms. Compared with close-focus X-ray therapy, PDT has an undoubted advantage over the duration of treatment–the session is performed once, and the course of radiation therapy, according to the national Standards, is usually 30 days.

In our opinion, the main indications for the use of PDT in the treatment of BCC are:

3. Tumors of anatomically «inconvenient» localization (auricle, angle of the eye, tip of the nose);

The correct choice of photoirradiation regimes plays a major role in obtaining a stable antitumor effect in the conduct of PDT with Photolon. According to the results obtained by us, the use of doses below 50 J/cm2 is not effective enough. The best results were observed with doses ranging from 50 to 100 J/cm2, but in cases with nodular and ulcerative-nodular forms, the exposure doses was increased to 150 J/cm2 to 300 J/cm2. At a standard dose of intravenously administered Photolon 2 mg/kg to 2.5 mg/ kg, the interval between administration and irradiation 2.5 h to 3 h. and the use of a laser with a wavelength of 660 nm ± 5 nm, the recommended energy density of photoirradiation is 100 J/ cm2 to 150 J/cm2. Patients treated according to these conditions achieve the best effect in the therapy of BCC of the skin with minimal healing time and no serious complications.

In conclusion, we can summarize that PDT has a number of advantages in comparison with traditional methods of treatment of BCC, such as:

1. Minimal toxicity for the surrounding normal tissues, due to the selective accumulation of the photosensitizer in the tumor;

3. Absence of mechanisms of primary and acquired resistance;

4. Possibility of an outpatient procedure;

5. Possibility of combination with other methods of treatment;

6. Possibility of repeated repetition of the procedure;

7. Ease of use in the multiple nature of the lesion;