Pharmacophore Structure Based Protein Modelling for Factor VIII via the Implication of Computational Tools.

Pharmacology hypothesis development and testing have been pursued through computational tools. These methods encompasses quantitative structure-activity relationships, database management and data-mining, similarity search tools, homology models, machine learning pharmacophores, data mining, network analysis tools and data analysis tools that use a computer. By the implication of computational analysis tools such as network analysis & data analysis could be implemented in order to identify substitution perceived necessary for the malfunctioning protein. The discovery and optimization of novel molecules having affinity to a target can be dealt with the use of such computational (in-silico) methods. The pharmacodynamic & pharmacokinetic properties of drug administered could be identified based on ADME (absorption, distribution, metabolism and excretion) and toxicity attributes and also characterizing physiochemical features can be perceived through such tools. Blood coagulation process is influenced by Coagulation factor VIII, which is a protein. Its deficiency causes haemophilia A. Coagulation factor VIII substitution can serve for the treatment of haemophilia related bleeding disorders. Plasma-derived products have played an active role in finding substitutions for the deficient protein. The recent researches have been focussed upon the development of coagulation factor that has increased half-time or can efficiently overcome immunological response. The next step would be the procurement of recombinant coagulation factor VIII using cheap prokaryotic expression system. Thus lowering of production costs corroborated by curtail in the production time, influencing availability of product, and also eliminating of infection risks.

Factor VIII (FVIII) deficiency or Haemophilia A is an inherited catastrophe due to deficient factor VIII, serving as a protein assist clotting. It is a genetic anomaly and is rarest of disease observed in children, Spontaneous mutation being a causative 1 in 3 affected cases, i.e., an alteration in the carrier of genetic information. The probability of haemophilia occurrence reported by the US Centre for Disease Control and Prevention is one out of five thousand live births. Reported figures in the U.S. of about 20,000 people suffering from haemophilia. The percentage of the haemophilic A afflictions is four times on all races and ethnic groups compared to haemophilic B afflictions. The X serves as the carrier for haemophilia causative gene and the paradigm of inheritance is X-linked recessive. Daughters inherit one X sex chromosome from both mother and father (XX). On the contrary, sons inherit X chromosome from females and a Y (sex chromosomes) from males (XY). Hence an innuendo of faulty inheritance is always lurking as son inherits an X chromosome from his mother, being a carrier haemophilic causative gene, thus afflicted by haemophilia. It can also be asserted that haemophilia cannot inherited by the sons from their fathers. Daughters being the carriers of haemophilic causative gene, do not exhibit haemophilic traits phenotypically. Hence she can pass the gene to offspring. A rare observance of haemophilic affliction is reported in females [1-4].

The determination of the haemophilic symptoms depends upon the levels of Factor VIII in plasma, with a normal range of less than 50% asserts the provisions for clotting. People with haemophilia A often, bleed longer than other people. Trauma, minor cuts, dental incisions can also serve as a causative of bleeds. Hence the frequency of bleeding in a person depends levels of F VIII in the plasma [1]. The severity categorization haemophilia is being done on the basis of plasma levels of factor VIII mentioned below;

Case II: People with plasma level of 1% to 5% F VIII suffer from moderate haemophilic A afflictions have prolonged bleeding event post serious incisions or injuries. Spontaneous bleeding events are those which don’t have obvious reason for it.

Case III: With a level of less than 1% of F VIII in the blood plasma. Chronic haemophilia A patients encounter profuse bleeding events post inflictions and may encounter spontaneous bleeding frequently into their muscles and joints.

Medical health history of a family could play significant role in the determination of affected relatives diagnosed with a clotting malfunction or symptomatic innuendos. Assays pertaining to calculation of bleeding time and subsequent clot formation could prove to be worth in adjudication of severity of the inherited catastrophe. This type of clinical testing is termed as clotting factor test [4-9].

The assessment of spontaneous or traumatic intracranial haemorrhage can be done with the tomography scans without or with moderate contrast levels. Further assessment was on the basis of head and spinal column MRI scans. The techniques like MRI and Ultrasonography prove to be worth in the assessment of acute or severe effusions and also useful in the evaluation of the synovium, joint space and cartilage. However even after infusion of adequate amounts of factor concentrate to assist clot formation, test for inhibitors is recommended [5]. Correction failure of clot formation timing with 1:1 mix with normal plasma indicates the presence of inhibitors. Bethesda method is used in determination inhibitor concentration by titration and estimation are made in terms of Bethasda units (BU).

An increment in FVIII levels is associated with aging, oral contraceptives, pregnancy, and hormone replacement therapy such as estrogen. Placenta not being permeable to a large molecule like FVIII and thus the diagnosis by quantitative assay of cord blood can be made at the time of birth. Distinctions could be on the basis of ristocetin cofactor activity and von Willebrand factor antigen elevated levels from haemophilia A [10]. There is longer bleeding time observed in patients suffering with von Willebrand disease compared to patients marred with haemophilic afflictions. The periodic in-vitro evaluation of presence of FVIII and inhibitor [9,11,12], screening of transmissible or transfusion-related diseases such as hepatitis and HIV infection is made in the patients diagnosed with haemophilia.

Concentrated FVIII product serve as the medication provisions for treat haemophilia A known as clotting factor. Recombinant factor products in vitro engineered, utilize donor pools as a source for assay. Recombinant factors administered intravenously in the arm or through a chest port. In order to maintain the adequate levels of clotting factors in the blood plasma patients have to go through the daily dose regime as preventive measure known as prophylaxis, DDAVP (desmopressin acetate), the synthetic vasopressin prevents bleeding, used as a natural antidiuretic hormone [13-15]. Mild haemophilia can also be treated especially concerned with the bleeding events of joint and muscle, for mucous membranes bleeding events viz. mouth and nose, and prior & post-surgical procedures. It is administered via injection and also through nasal spray. For the prevention of the breakdown of blood clots, aminocaproic acid is used prior to dental surgeries. It is also used to treat nose and mouth bleeding episodes. It is generally administered orally. It is important to tackle haemostasis, bleeding events, efficient utilization of factor replacement and adjuvant medications is important in management of disease like haemophilia. Treatment of patients suffering with haemophilia synovitis is being treated with inhibitors [6-8].

Implication of computational tools (in-silico) in the pharmacophore modeling

The deployment of computational tools have been pursued in pharmacology, thus for development of hypothesis and testing [16,17]. For the discovery and optimization of novel molecules with affinity to a target, these computational tools have seen worldwide utility. Obfuscations of ADME i.e., absorption, distribution, metabolism, excretion are also being cleared. Physicochemical characterization and toxicity attributes are also being deciphered [18-31]. In silico pharmacology as described by Ekins et al., emphasizes the development hierarchy of drugs on a global scale. It also includes the methods concerned with quantitative structure-activity relationships (QSARs), similarity searching, homology modelling, identification of pharmacophores, machine learning, data and network analysis via computer. Recognition of virtual ligand, virtual affinity & target-based screening and profiling could also be managed [13,14,17,21]. Applications of these methods to decipher complex attributes of the target proteins and revelations of pharmacological space can be done (Table 1 and Figures 1-12) [22-27].

Table 1. Tabulation of protein and their respective analysis. 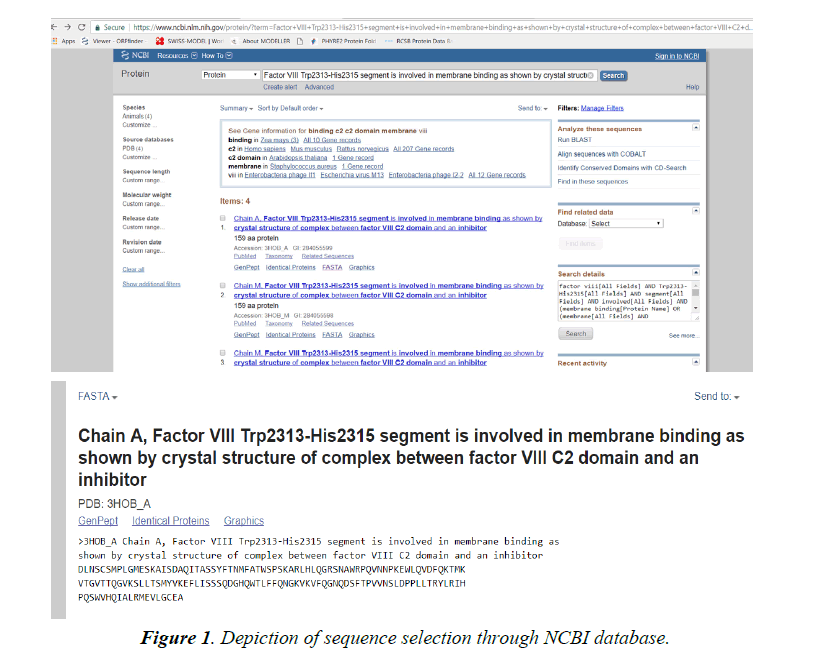 Figure 2. Swiss Model of 3HNB giving the detailed description of the 3HNB protein with 3D structure of it and the target sequence. 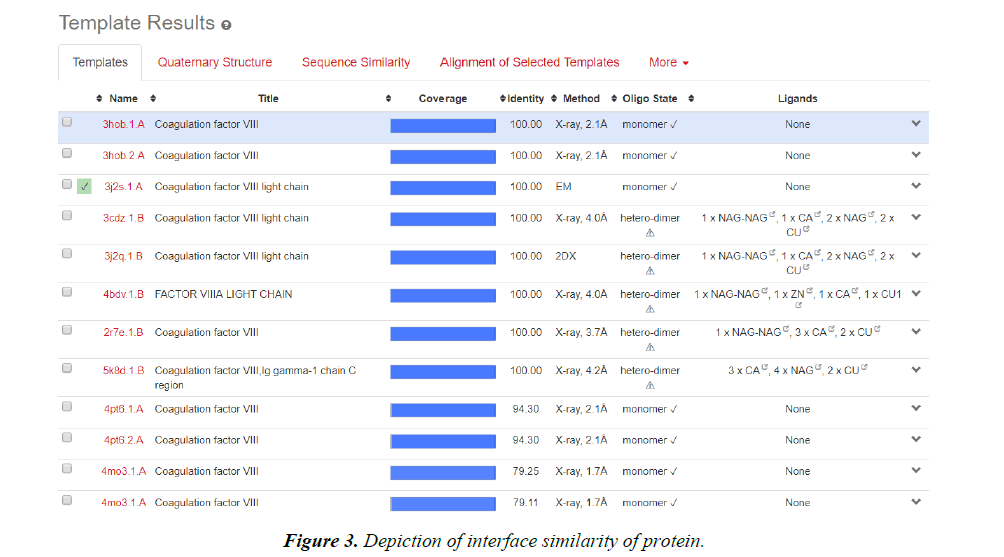 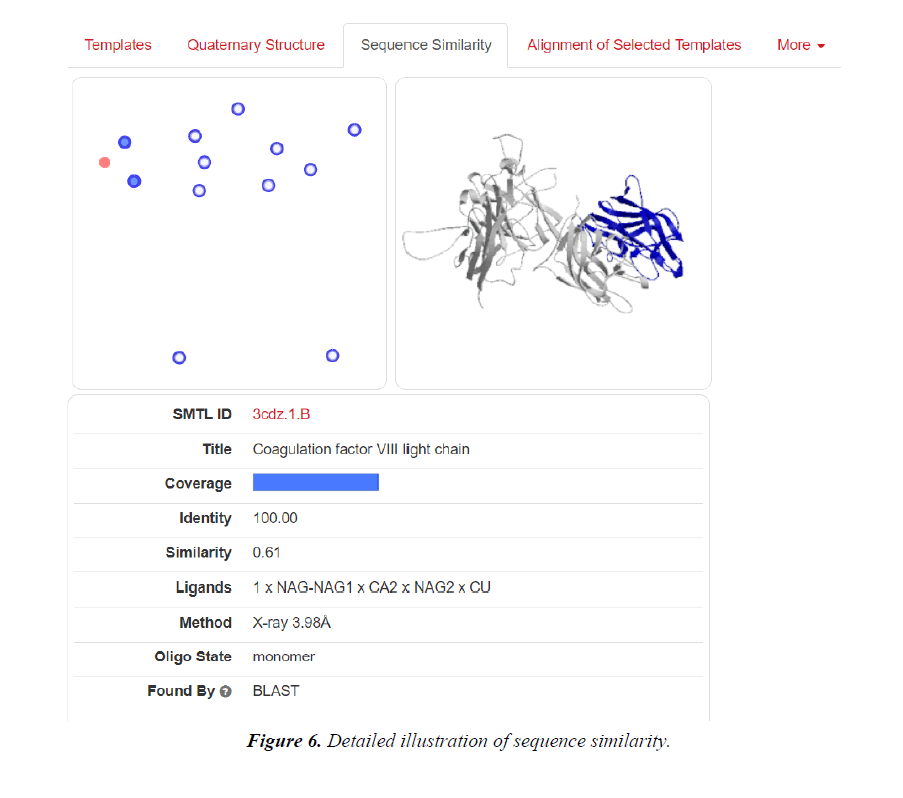 Figure 7. Illustration of the 3D structure of 3CDZ, the spacefill structure the red -grey ball structure denote the ligand. (Ligand formula- 1 x NAG-NAG, 1 x CA, 2 x NAG, 2 x CU) MSA result: The two sequence which were run on this tool. Chain A and Chain B. 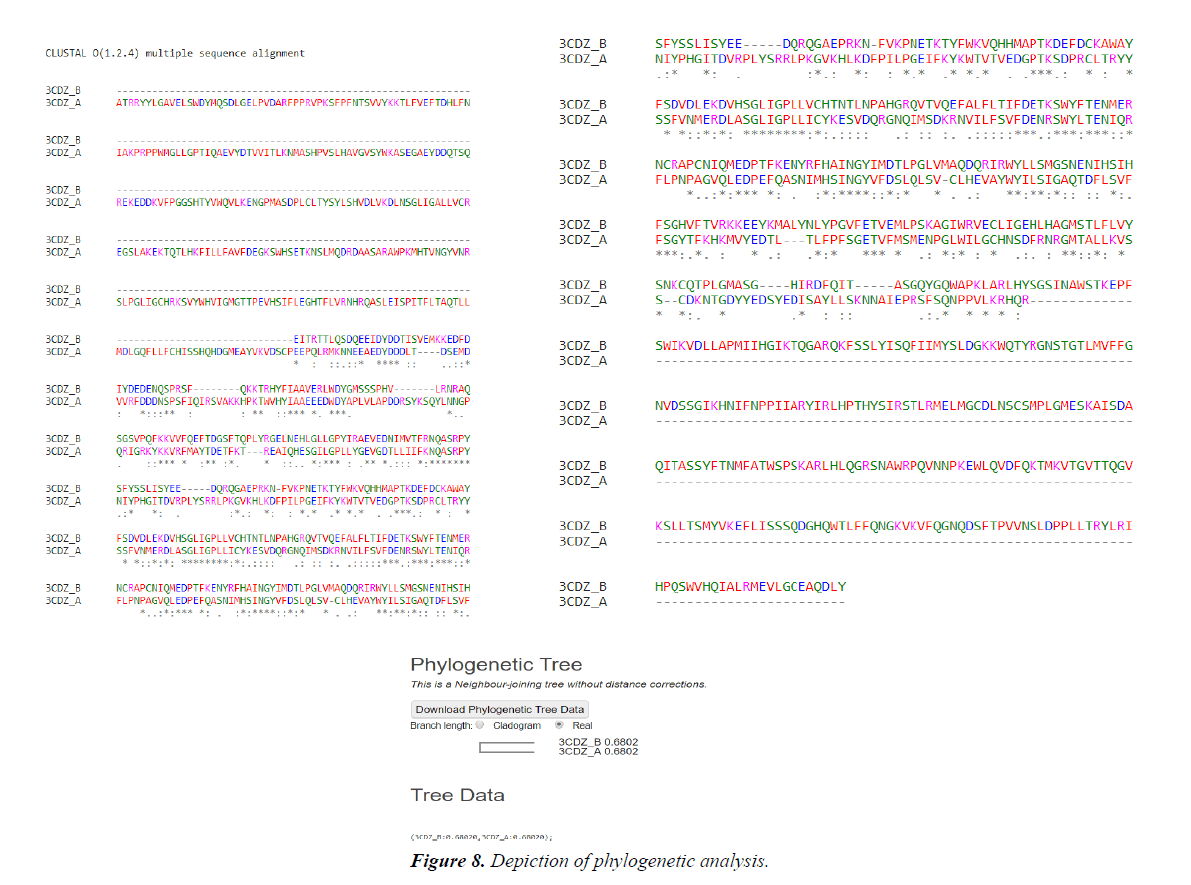 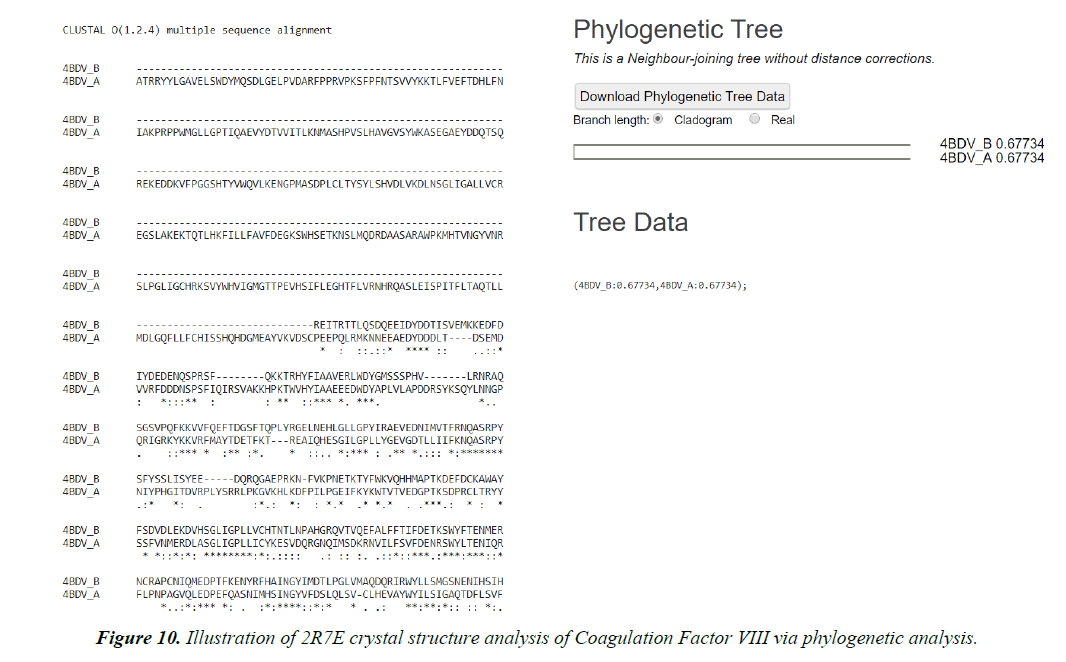 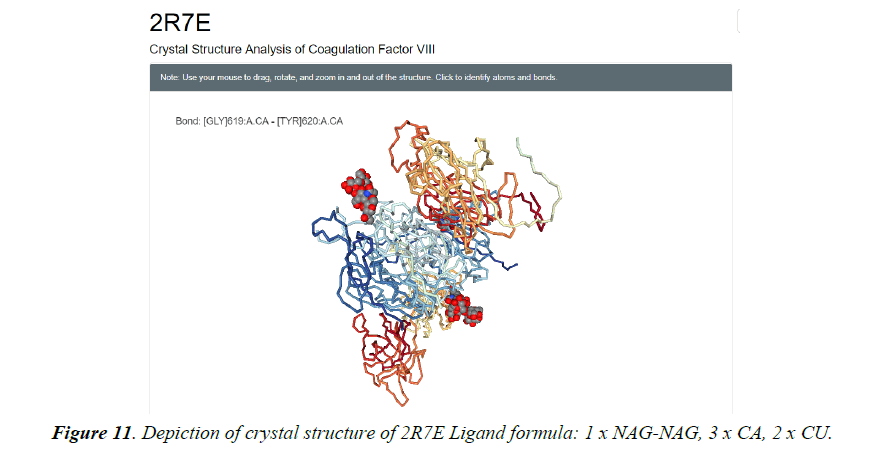 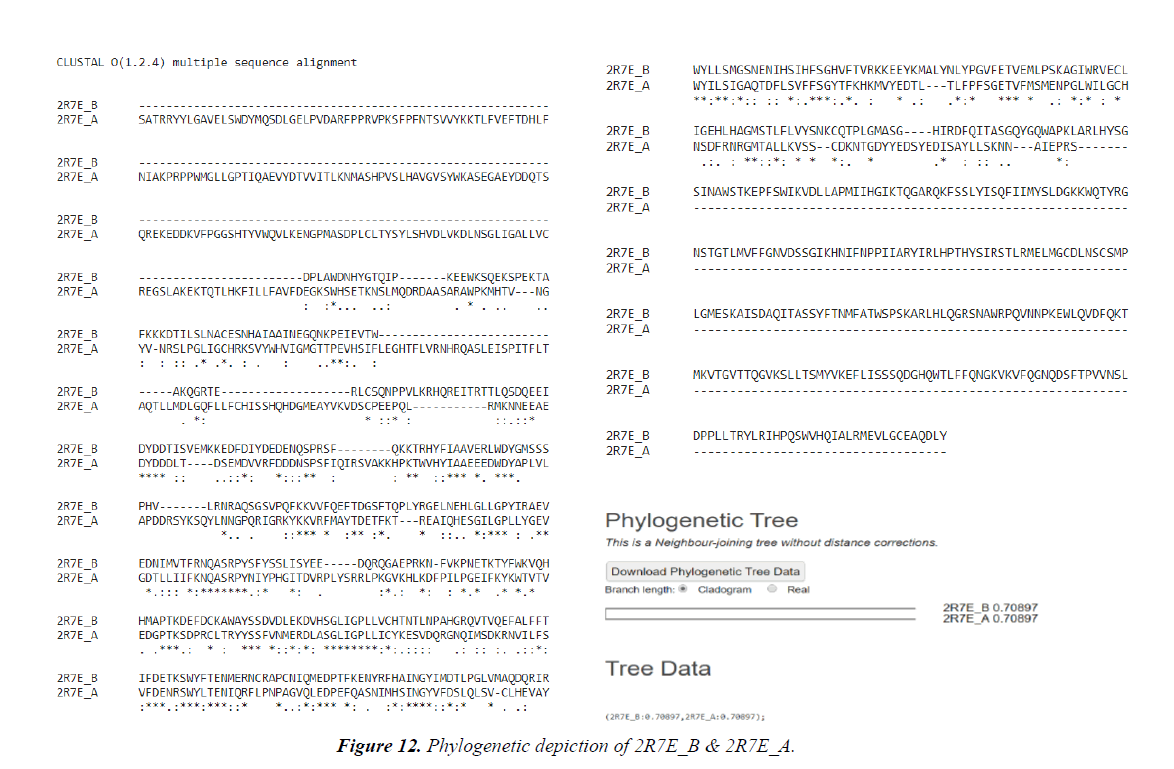 Lipinski rule states that- No more than 5 hydrogen bond donors (the total number of nitrogen–hydrogen and oxygen– hydrogen bonds). So, due low Resolution of Protein Id 3HNB (Factor VIII Trp2313-His2315 segment is involved in membrane binding as shown by crystal structure of complex between factor VIII C2 domain and an inhibitor). We take this for further analysis.

Click opens the protein database and search for 3HNB.

Select the 3HNB and FASTA the sequence.

This FASTA sequence will be used for further analysis through modelling schema mentioned below.

Now, these sequences used for Swiss modelling where the 3-D structure of Monomer of protein the resolution of which is less than 2 Å, are observed; 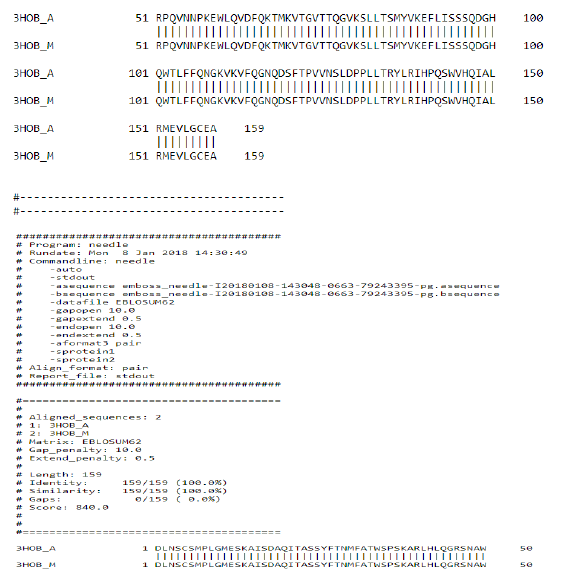 2. Swiss Modelling displays the ligand in 3D structure with its Phylogenetic Analysis.

Computational pharmacology establishing paradigm for ongoing research to develop methods efficiently dealing with the inherited catastrophe like haemophilia and expedites the process of revelation of discovery of novel & peculiar target compounds & respective prognosis of their biological activity. The discovery of isozymes that deciphers the biological interaction with the substrate reveals various modulations of disease afflictions. Differential expressions of drug on the human body depending upon the absorption, distribution, metabolism & excretion phenomenon can thus be identified. Factor VIII being a protein is being enveloped by the folding patterns of α- helices & β-pleated sheets & therefore structure prediction tools can reveal the site of modification of the faulty sites in the protein. Hence it could render the alternatives to develop the pharmacophore.