Observations: A 57 year-old female with a history of metastatic non-small cell lung cancer treated with radiation therapy and pembrolizumab presented with acute onset of painful horizontal diplopia on right gaze. MRI Orbits and Brain revealed new diffuse enhancement and enlargement of the right lateral rectus muscle that had not been present on imaging six weeks prior. The patient was presumed to have IOIS and was started on oral steroid therapy, which lead to resolution of symptoms.

Conclusion and importance: This is the first reported case of pembrolizumab-associated IOIS. Discovery, recognition, and treatment of ophthalmologic side effects of pembrolizumab are necessary for vision preservation in cancer patients who may benefit from the medication.

Pembrolizumab is an immune checkpoint inhibitor approved in 2014 for a variety of cancers including metastatic non-small cell lung cancer, melanoma, head and neck cancer, Hodgkin’s lymphoma, and urothelial carcinoma. Pembrolizumab is a humanized monoclonal antibody targeting programmed cell death-1 (PD-1) receptor, which normally prevents the immune system from attacking the body ’ s own tissue. When programmed death-ligand 1 (PD-L1) (often produced by cancer cells) binds to the PD-1 receptor, the immune system’s ability to recognize and kill the cancer cells via a cytotoxic T-cell response is inhibited. Pembrolizumab reverses this process and has excellent efficacy in enhancing the immune system ’ s ability to destroy cancer cells by cytotoxic T-cell recognition of tumor [1]. Unfortunately, the T-cell proliferation that results from prembrolizumab and other similar checkpoint inhibitors can also lead to autoimmune-related adverse events such as hypothyroidism, pneumonitis, colitis, and dermatitis [2]. Ophthalmic autoimmune-related adverse events are rare, but those reported include myasthenia gravis, uveitis, conjunctivitis, optic neuritis, disc edema, and chorioretinal and thyroid eye disease-like changes [3-9].

Idiopathic Orbital Inflammatory Syndrome (IOIS), also known as orbital pseudotumor, is characterized by inflammation of tissue within the orbit, which mimics neoplasm [10]. The condition is usually unilateral and may present with an abrupt onset of pain, limitation in extraocular motility, diplopia, proptosis, chemosis, and swelling and redness of the eyelids [10,11]. Orbital MRI frequently reveals enlargement of extraocular muscles and tendons [10]. Systemic corticosteroids are the primary treatment to which the condition responds rapidly. Steroids are often continued for several months and tapered slowly to ensure remission. Radiotherapy and other immunosuppressive agents may be used in patients unresponsive to steroids. A good visual prognosis can be expected, but patients may have recurrence and further progression [10-12].

The present case is the first reported occurrence of pembrolizumab-induced IOIS resulting in diplopia in a patient with non-small cell lung cancer.

A 57 year-old female presented with acute onset of painful horizontal diplopia on right gaze. Her medical history was notable for metastatic adenocarcinoma (non-small cell lung cancer), treated with radiation therapy as well as pembrolizumab (Keytruda®, Merck). The diplopia started with her fifth cycle of pembrolizumab.

The patient’s visual acuities were 20/20 OD, 20/15 OS. There was no RAPD. Motility demonstrated a painful abduction deficit with an incomitant esotropia (12 prism diopters [PD] in primary gaze, building to 40 PD in right gaze; 4 PD at near). There was excellent orbicularis strength without fatigable ptosis or variability in extraocular deviations. Anterior and posterior segment examinations were unremarkable.

Urgent MRI Orbits and Brain were obtained for concern of metastatic disease. There was new diffuse enhancement and enlargement of the right lateral rectus muscle that had not been present on imaging six weeks prior (Figures 1 and 2). 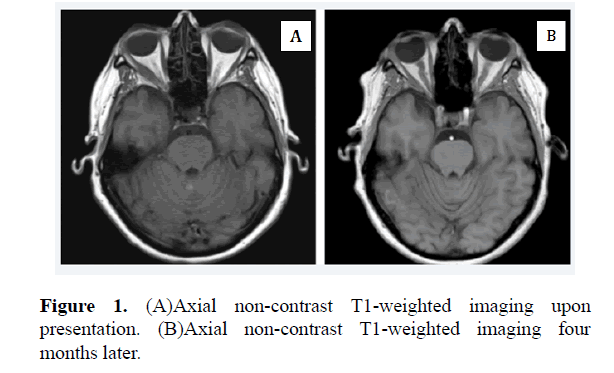 For presumed IOIS, the patient was started on a short burst of oral steroid therapy (methylprednisolone 4 mg dose pack tapered over 6 days). Inflammatory changes, pain, and diplopia entirely resolved with treatment. MRI findings had regressed 4 months after treatment (Figures 1 and 2 (A)).

A variety of ophthalmic manifestations of pembrolizumab and other drugs that target the PD-1/PD-L1 pathway have been reported. Optic neuritis was reported in a patient on anti-PD-L1 therapy for non-small cell lung carcinoma [4]. Graves orbitopathy developed in a patient with metastatic Merkel cell carcinoma who had received three doses of pembrolizumab [5]. Bilateral uveitis has been reported in an individual with stage IV melanoma after initiation of pembrolizumab [7]. Melanoma-associated retinopathy progressed in a patient with metastatic cutaneous melanoma after initiation of pembrolizumab therapy [6]. All aforementioned cases had resolution of their ophthalmic manifestations with steroid therapy. In a study of 496 patients with melanoma on pembrolizumab or nivolumab (another PD-1 receptor antibody), eight patients (1.6%) developed ocular side effects including iritis, uveitis, conjunctivitis, dry eyes, and blurred vision [9]. In these cases, topical non-steroidal or steroidal therapy was adequate for treatment.

The present case represents the first report of IOIS evolving subsequently to treatment with pembrolizumab. This patient’s painful diplopia entirely resolved with a quick steroid taper and she was able to continue with the pembrolizumab therapy. Prompt initiation of systemic corticosteroids may lead to less recurrence and treatment failure. Improved recognition of IOIS in patients on pembrolizumab will hopefully encourage prompt treatment of the disease process to yield better outcomes. This case also highlights the importance of vigilance on the part of the physician, to monitor for other potentially reversible ophthalmologic and other systemic side-effects that emerge, as pembrolizumab and other therapies that target the PD-1/PD-L1 pathway become more widely used.

Pembrolizumab immunotherapy has been efficacious in the treatment of many cancers. Certain autoimmune side effects of the medication have been previously described, but more may be unveiled as the therapy continues to be used. The present case describes the first reported occurrence of pembrolizumabinduced IOIS in a patient being treated for non-small cell lung cancer. Recognition and treatment of this adverse effect in patient’s on pembrolizumab is essential.

The patient describes her “very upbeat and positive” attitude as integral to her resilience throughout her diagnosis of cancer, various treatments, and surgeries. Her approach has also prepared her for inevitable set-backs. The patient was scared when she first developed eye pain, especially since he had never had difficulties with her vision in the past. As the pain worsened and diplopia developed, she became increasingly concerned and distressed. Until that point, she had insisted on working full-time, and this was the first time she was worried about being able to continue doing so she felt unsafe driving to work, and the impaired depth perception was debilitating. She was incredibly grateful for her care team who promptly diagnosed and treated her, and was thrilled how quickly she improved on steroids. She is doing well with continuation of pembrolizumab and maintains a positive attitude. She is happy to share her case through this report and help others who may encounter similar experiences.

Consent to publish the case report was obtained. This report does not contain any personal information that could lead to the identification of the patient.

No funding or grant support.

The following authors have no financial disclosures: AK, KM, NV.

All authors attest that they meet the current ICMJE criteria for Authorship.